When Marvel announced THE VISION as part of its ALL-NEW, ALL-DIFFERENT lineup, I thought it was a cheap attempt at capitalizing on the success AVENGERS: AGE OF ULTRON enjoyed at the box-office the previous spring. The Vision was a character I knew little about. I found him to be uninteresting. So I discounted the book. I neglected to put it on my pull list. I’m not afraid to admit when I’m wrong; I made a mistake. I picked up number one on a whim halfway into the series’ print run. Now, having devoured THE VISION in its entirety, I can say with complete certainty that it is one of, if not THE best series I have read in the last few years.

READ: Haven’t started THE VISION? Check out our review of THE VISION #1 before going any further!

By the start of this issue, the events of the series have largely finished. THE VISION’s final issue begins with what a first-time reader might believe to be a recap in the form of a confession to police from the Vision’s wife, Virginia. However, she alters a portion of her statement so that blame is shifted away from The Vision, so that it would be she who would be found responsible for crimes he had committed. 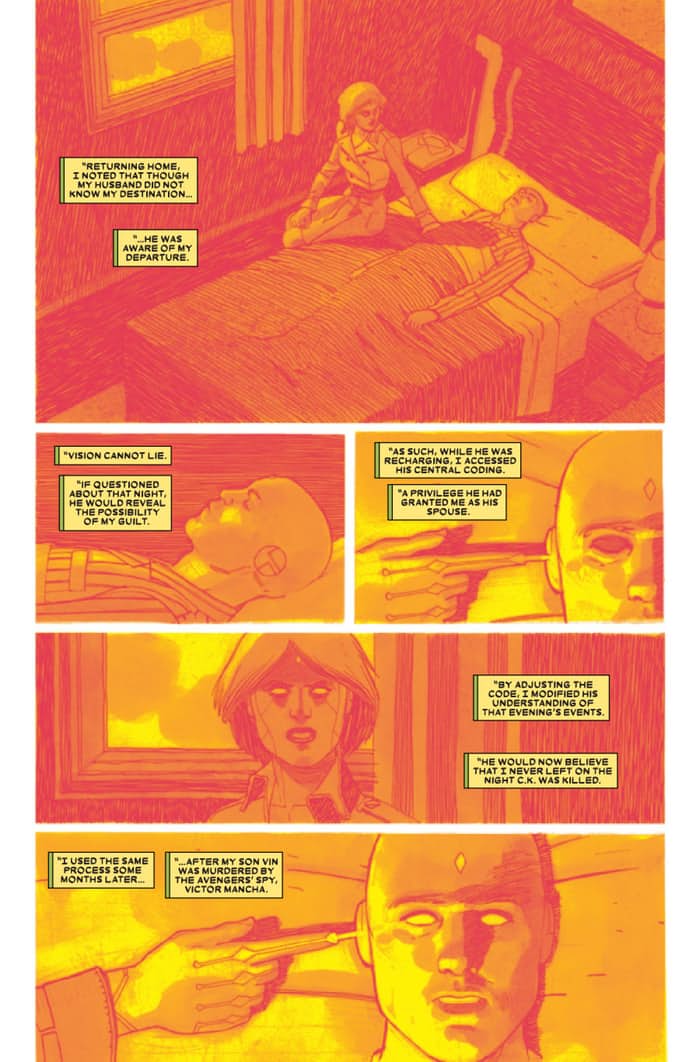 As Virginia hangs up the phone, she drinks from the flying water vase of Zenn-La, and the corrosive liquid it contains begins to kill her. Virginia takes her own life as a preventative measure, to ensure that her husband would have no reason to amend her story to the police. She informs him that back in issue #11, she killed the family dog, and afterwards ate a petal from the everbloom of Mt. Wundagore, allowing her to see into the future. The future that she saw was one in flames, one in which the Vision set the world ablaze to protect his wife and child, leading her to alter the story she told police and end her own life. While her husband has saved the world exactly 37 times, Virginia is content that, in death, she has saved it once.

The rest of the issue is largely uneventful. Viv and Scarlet Witch walk near the Washington Monument as the two discuss mortality, sacrifice, and life’s cyclical nature before the latter presents Viv with a very surprising gift. In a series characterized by loss, guilt, grief, and anxiety, King treats readers to a heartfelt exchange between father and daughter, perhaps as a peace offering, before closing the series with a morbid throwback to its beginnings.

Writer Tom King proves yet again that his surname is well-deserved. Instead of reigning with an iron fist, King does so with his command of the English language. Even on the impressive list of King’s writing credits, surprisingly expansive given the length of time he’s been in the field, THE VISION stands out. It is rare that I am satisfied with the conclusion of a serial media, but I believe King was able to close THE VISION in a way that does both the series and its characters justice. A great deal of narrative contained within THE VISION is communicated via an omniscient narrator, or through monologues imposed over other goings-on before the speaker is revealed, and its final installment is no different. THE VISION #12 features monologues from Virginia and Scarlet Witch, both of which are extremely compelling. It seems fitting that Scarlet Witch’s largest role in THE VISION does not come until after the woman constructed from her brain waves has gone. 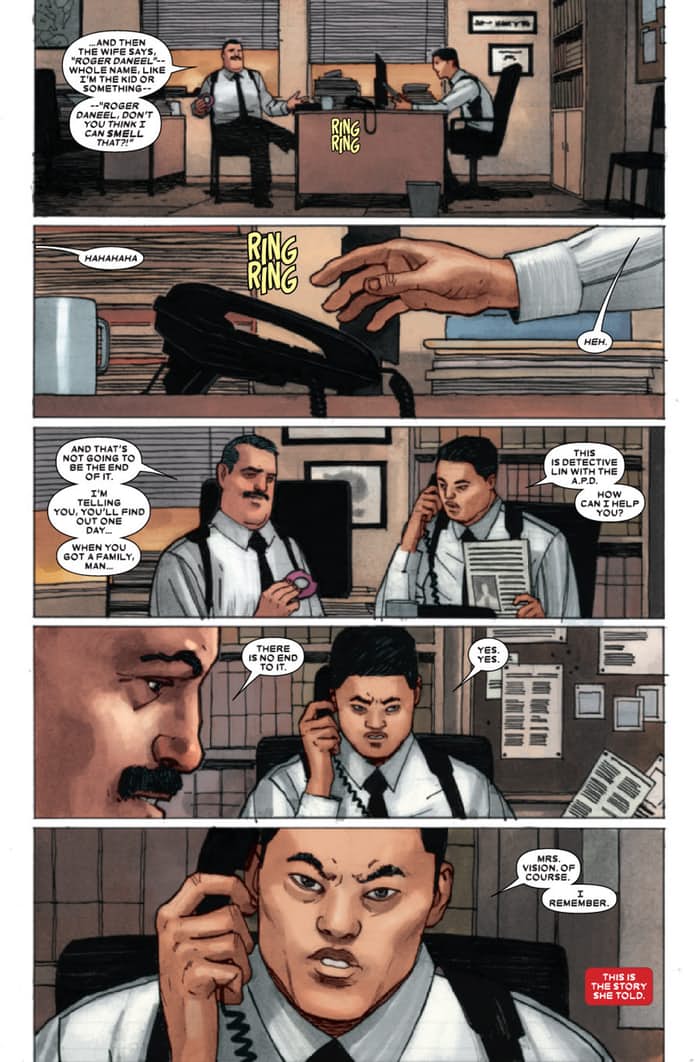 In addition to this, King is able to create complex emotional profiles for characters who had not existed prior to his tenure on THE VISION, one of whom will see a great deal of panel-time in one of MARVEL NOW 2.0’s launch titles. King is able to confer a great deal of emotion through his characters to the reader, both through narration and dialogue. In the expansive word pool that makes up the English language, it seems as if King always manages to arrange the perfect ones in the perfect order. After finishing THE VISION #12, I made a cup of coffee and took my dog on a walk, all in complete silence in an attempt to process what I had consumed.

THE VISION’s titular character is driven by a desire to assimilate- all the Vision wants is to fit in. King places the Vision in an environment that doesn’t usually act as the central location in superhero comics: an American suburb. Through the desires integral to the Vision’s character, King is able to deliver an apt commentary on the nature of the American suburb and its ideals; namely whiteness. The Vision does everything possible to assimilate into suburbia, taking an office job, and even constructing a nuclear family for himself. However, he and his family face a great deal of adversity at the hands of suburban figures of authority: the principal and the police officer. Even their neighbors make it clear that the Vision and his family are not wanted, based on intrinsic physical qualities that they are unable to control. Through this, King forces the reader to consider the unacceptable treatment suffered by minority individuals in America. His ability to seamlessly integrate cultural critique into narrative without sacrificing any of its strength cements King’s place as one of the current creative titans of the comic industry.

READ: Want more from Tom King? Check out our review of the powerful BATMAN #6!

Should King continue to put out work at a similar caliber, he will surely join Miller, Claremont, and Morrison as writers whose work is considered mandatory reading for all fans of the medium. King has presented us with a classic. Decades from now THE VISION will still haunt the shelves of comic book shops. It will be one of the first comics we press into the arms of the next generation of comic book readers as they attempt to traverse adolescence. THE VISION #12 marks the end of Tom King’s time at Marvel. In losing him to an exclusive contract with DC, Marvel’s bullpen has suffered an immense blow from which sales will surely waver in some degree. 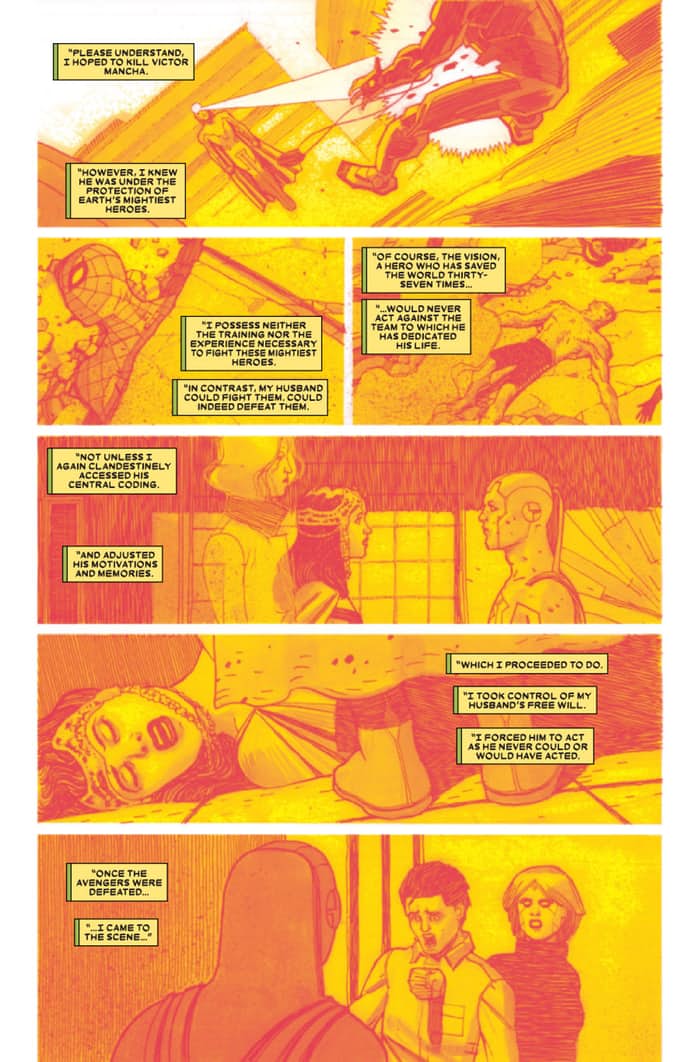 Gabriel Hernandez Walta renders a suburbia so immaculate, one would not even entertain the suggestion that darker things lurk just out of sight. This is suburbia as I have found it to be, an illusion of perfection that dissipates as soon as doors are closed and the lights go out. Walta’s work on THE VISION is some of the best in his career. His portrayal of the synthezoid family, whose lack of irises or pupils should have hampered his ability to convey emotion, is unwavering. Somehow, Walta is able to capture the ache, the relief, and tenderness of Virginia, as all three flicker, along with her life force in the climax of THE VISION #12. After she finally passes on, the manner in which Walta depicts the book’s titular character changes ever so slightly. There is a subtle slouch in the Vision’s facial expressions, the physical manifestation of an agonizing sense of loss. Walta renders the Vision in such a way that his grief is tangible, and sticks with you long after you’ve finished the comic.

Jordie Bellaire’s unique style of coloring does not employ the bold colors or striking differences in lighting generally associated with superhero comics. Bellaire’s style is much more subtle. This prompts readers to linger over each page, forcing them to take their time as they absorb the manner in which light dances over the Vision’s facial features. Bellaire often renders backgrounds in watercolor, using muted colors that juxtapose with the bright red of the Vision and his family, directing the reader’s eye towards the focal point of the panel before it is allowed to wander. The nuances of Bellaire’s coloring enables readers to pluck details from the text such as lumps in a couch cushion or the marriage of mulch and snow on a front lawn. These details might seem insignificant in the greater context of THE VISION, but knowledge is power, and each minute detail serves to immerse readers further and further into the world crafted by herself, Walta, and King.

LISTEN: For more comics that tackle racism and prejudice, check out our NEW MUTANTS podcast!

THE VISION #12 ends one of the most complex and emotional comics to come out of Marvel in years. After reading it in its entirety, it is unsurprising that the comic developed an enormous cult following. A huge part of the series’ draw is its accessibility. (I gave my grandma the first trade paperback for her birthday and she couldn’t put it down) You don’t have to have a great deal of knowledge of the larger Marvel Universe to understand and enjoy THE VISION. Hell, you don’t even need to enjoy superhero comics — you just need to be human.