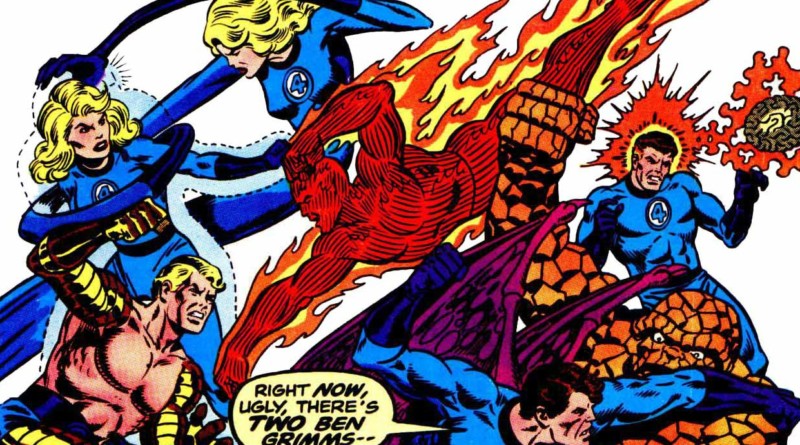 Although taking place in alternate realities, Marvel’s WHAT IF? has told some great stories that have impacted Earth-616. The introduction of Spider-Girl and the debut of Jane Foster as Thor decades before she picked up Mjolnir in the main Marvel Universe are just a few examples. But for every wonderful issue of WHAT IF?, there’s one that’s absolutely bonkers. Here, we count down the five weirdest issues of the series, in which Stan Lee becomes a superhero, superheroes become celebrities, and much more.

In this alternate reality, Spider-Man stops the criminal who murders Uncle Ben on Earth-616, and he uses the publicity from the event to make himself a big-time celebrity. Much to the chagrin of his aunt and uncle, who want him to use his scientific mind to better the world, Peter shows off his powers on TV and even substitutes for Johnny Carson on The Tonight Show. Somehow, the absence of grief and guilt from Uncle Ben’s murder makes not only Spider-Man but all the Marvel superheroes, from the Avengers to the X-Men, vapid and self-absorbed enough to use their powers for television fame and fortune.

The story’s conflict only comes in the last third of the issue, when Daredevil, the only superhero not completely enamored with stardom (although he is still signed on to produce a movie with Peter) reveals that people are plotting to kill Peter. They’re soon ambushed by almost all the biggest baddies of Spider-Man’s rogues gallery, and the two heroes team up to take them down, even though showbiz Spidey whines, “I can’t fight for real!” They vanquish the villains but not without casualties. Daredevil dies in the process, which prompts Peter’s realization about how he has misused his powers.

4. WHAT IF? Vol. 1 #11: What if the original Marvel Bullpen had become the Fantastic Four?

This issue gets bonus points for being the only one on this list that actually tries to be funny. It features three of the most important people at Marvel Comics — editor Stan Lee as Mister Fantastic, Marvel VP Sol Brodsky as the Human Torch, and writer-artist Jack Kirby as the Thing — as well as secretary Flo Steinberg as Invisible Girl, because Marvel apparently didn’t have any female employees more advanced than secretaries at the time of publication. We flash back to their origin story, in which a mysterious and creatively-challenged group called the “S” People deliver a pink parcel to Stan.  The parcel, when opened, emits cosmic rays that endow those in the room with superpowers.

Their subsequent search for the “S” people leads them first to the island of a mad scientist named Doctor Murrow (a ripoff of The Island of Doctor Moreau — I guess they were trying to avoid H.G. Wells’s copyright lawyers?), who has already been distorted by cosmic rays. Then, they travel to Namor’s underwater palace, where they arrive just in time to stop the Sub-Mariner from opening his own box of cosmic rays. Here, they find the “S” Person who planted the box, who turns out to be a Skrull! (One would think that such masters of disguise would come up with a pseudonym that doesn’t use the first letter of their name.) He escapes, but our heroes follow him to the cosmic ray-box factory, which they destroy; and thus end their troubles with the dastardly “S” People.

On one hand, I hate to mock this comic, as it’s pretty progressive for 1981. Cap’s vice president is a morally upright, uncompromising Black politician, who served as a wonderful example of equality almost three decades before President Obama assumed the Oval Office. On the other hand, though, the creative team had the brilliant idea of naming him after one of America’s most racist presidents:

LISTEN: Diversity in comics is a bigger issue than ever. Check out our podcast episode about Marvel’s Muslim superheroes!

Believe it or not, things get more ridiculous from there. Captain America is miraculously the best POTUS ever, establishing a solar energy-harvesting satellite that beams the energy to Earth through the atmosphere, thereby “freeing America from the tyranny of foreign oil.” He also facilitates a revolution against the tyrannical government of the Republic of San Pedro, but this backfires when the revolutionary leader invites President America down to San Pedro and reveals himself to be none other than… the Red Skull!

The Red Skull imprisons Captain America in his basement and somehow hijacks the US’s solar satellite to use as a weapon of mass destruction. But while the Red Skull is distracted by training the satellite’s power on Washington, a chained-up Captain America reaches his shield and bursts out of his confines. He takes down the Red Skull and tries to redirect the satellite but, due to his scientific ineptitude, accidentally trains it on the very building in which he is imprisoned. He saves Washington at the cost of his life, eliciting the sympathy of the superhero community and the entire nation.

2. WHAT IF? Vol. 1 #6: What if the Fantastic Four had different super-powers?

Conflict emerges because Reed, without a human body, is failing to keep the affection of his wife, who, for some reason (maybe those sexy dragonfly wings?), is pining over Ben. With the rest of the team out fighting crime and enjoying the fact that they have bodies, Reed is sad and alone in the Baxter Building when Doctor Doom approaches him. Promising to construct him a body, Doom persuades Reed to accompany him back to Latveria. Once the others return to find that Reed has been kidnapped — or, as the always-clever Sue puts it, “brain-napped” — they track down Doom and have a fight fit for the ages.

The trio struggles to defeat Doom, but Reed saves the day when, drawing on his anger, he takes control of the villain’s mind and makes him push the castle’s convenient self-destruct button. The Fantastic Four survive the blast, and, better yet, Reed now has a corporeal form, as he miraculously sent his mind into Doom’s body before the explosion. Satisfying a story as it is, I’m still waiting for the sequel, in which Doom tries to get Reed ousted from his body à la THE EXORCIST.

You may have noticed that this is the first issue from WHAT IF? Volume 2 on the list. Indeed, it seems like the series had gotten most of the wackiness out of its system before being revived in the late ‘80s. This issue, however, is a very notable exception. It begins with Peter and Aunt May watching the liftoff of a rocket piloted by John, the son of J. Jonah Jameson. Due to mechanical sabotage, the rocket fails after liftoff and turns towards the launch site, killing John and Aunt May. Grief-stricken, Jonah then adopts Peter against his will (however that works) and places him under the guard of school bully Flash Thompson.

Things become difficult when Jonah names Spider-Man as the rocket’s saboteur and hires a scientist to create a serum that endows someone with superpowers and a robotic suit called the Spider-Slayer. But Flash, who dreams of becoming a hero, drinks the serum to become a villain named the Scorpion. Peter goes off to stop him from wreaking havoc, but not before revealing to his “father” that he is (gasp!) Spider-Man. He becomes embroiled in a fight with the Scorpion and the Vulture, and it looks like all is lost when he is saved by none other than a robot suit-wearing J. Jonah Jameson himself! Words fail to explain how ridiculous this ending is, so I’ll just leave you with the final page:

Why Read WHAT IF?

As ridiculous as WHAT IF? must have been decades ago, they seem even more absurd today, with comics growing ever more sophisticated and nuanced. That being said, revisiting this series has been the most enjoyable comics-reading experience I have had in a long time. As much as I love the direction the medium is moving, you’d be hard-pressed to find a comic today in which Stan Lee punches out bad guys while spouting one-liners. So if you want to revisit a simpler, zanier, and far more poorly-plotted time period, be sure to check out the weirdest issues of WHAT IF?.