A few weeks ago some friends and I were walking around Rittenhouse in Philadelphia when we decided to go inside the Barnes and Noble on 18th Street. It’s a three-story establishment with a Starbucks on the second floor. There’s always a crowd of people, and it’s a great stop during mid-afternoon strolls around the city. On this particular day we were perusing the fiction section, where naturally I wandered into the comic book area. I was looking through some SHERIFF OF BABYLON when a friend was looking over my shoulder.

“This is such good stuff,” I said. “I wish I had collected it when it was being published last year.”

“What do you mean?” he asked. “Like, you wish you read it when it was released?”

“Like, I wish I had read the first issue the month it came out, so I bought each issue. It would be a cool series to have in its original printing.”

He looked at me with perplexing eyes, and I realized what was causing the confusion.

“Look,” I said, showing him the back of the book. “See, it says it’s collecting the first six issues. This was originally produced in single issue form. You know, like what you see in comic boxes.”

“Oh,” he said. He looked at the shelf of books. “So wait, are these not graphic novels then? You know, like WATCHMEN?”

“Comics and graphic novels are the same exact thing.”

“Are they? Aren’t graphic novels, like, more serious? More in-depth?”

“You do know WATCHMEN was originally produced in single issues, right? Over the course of a year? It’s copyrights are even 1986 and 1987.”

He looked at me with those perplexed eyes again, but the conversation sort of pattered down and we quickly moved along back to the fiction section to check out Gillian Flynn’s GONE GIRL, a book we were discussing just a few minutes before entering the store. Realistically, I could have ranted for a solid hour about this stigmatization of comic books in our society. I could have pointed out how just the word ‘comic’ immediately feels juvenile, and this is coming from someone who will defend the medium from Hell and back. I didn’t mention any of this in that moment, so here I am now. 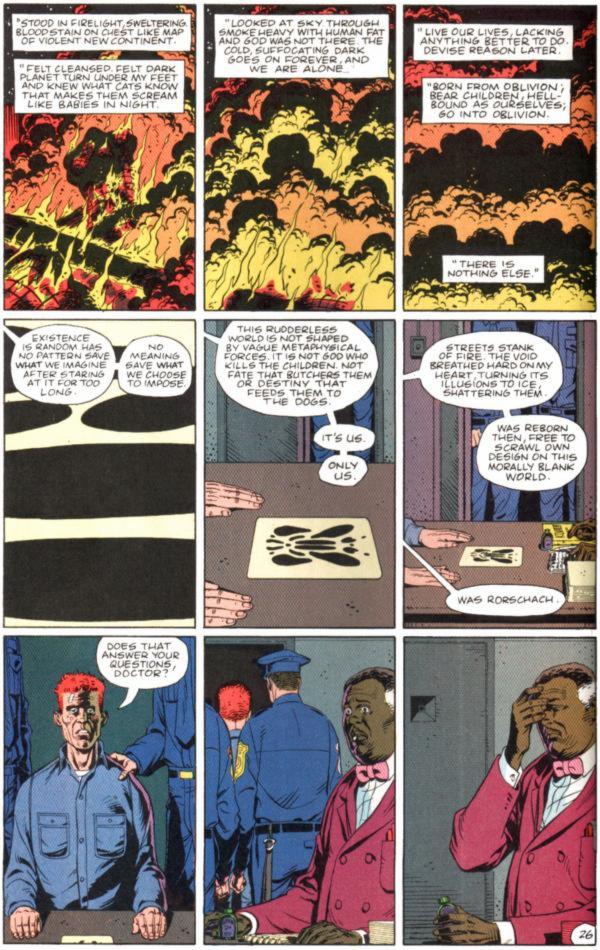 In American culture, comics are often associated with what you find in a newspaper, while comic books are usually synonymous with superheroes. This is a bit of a generalization, but it’s what I’ve noticed in my experience. Very rarely do traditional superheroes get welcomed into the graphic novel genre, and I truly believe much of that has to do with the assumption that superheroes are for kids while graphic novels are for more mature audiences.

LISTEN: Some consider CIVIL WAR to be a graphic novel for its epic-like story. Here’s our podcast on it!

Truthfully, I think the phrase ‘graphic novel’ should be phased out completely. It creates an unnecessary divide in the medium while perpetuating the comic book stigma. If the phrase ‘comic book’ is to ever escape its taboo life, it needs to be seen and said much more than it currently is. A simple Google search of “difference between graphic novel and comic book” will list many blogs and answers. Amongst these responses is the prevalent idea that graphic novels are complex, while comic books are not. Some say graphic novels are meant to be longer while comics are like simple periodicals, stories that begin and end with one or two issues. This was truly bothersome because it listed WATCHMEN and SIN CITY as examples, two comics released monthly back in their heyday. Even on THE WALKING DEAD television show, the intro writes, “based on the series of graphic novels by Robert Kirkman, Tony Moore and Charlie Adlard.” However, THE WALKING DEAD is a monthly comic as well!

I read one response in particular that talked about character development being absent in comic books, and this infuriated me: you’re going to tell me a comic like INVINCIBLE has no character development? Or ULTIMATE SPIDER-MAN? Watching Peter Parker and the supporting cast grow during Bendis’ run was one of the most impressive things I’ve seen in comic books. The ups and downs and twists were much more developed than many proclaimed novels I’ve read in my life. 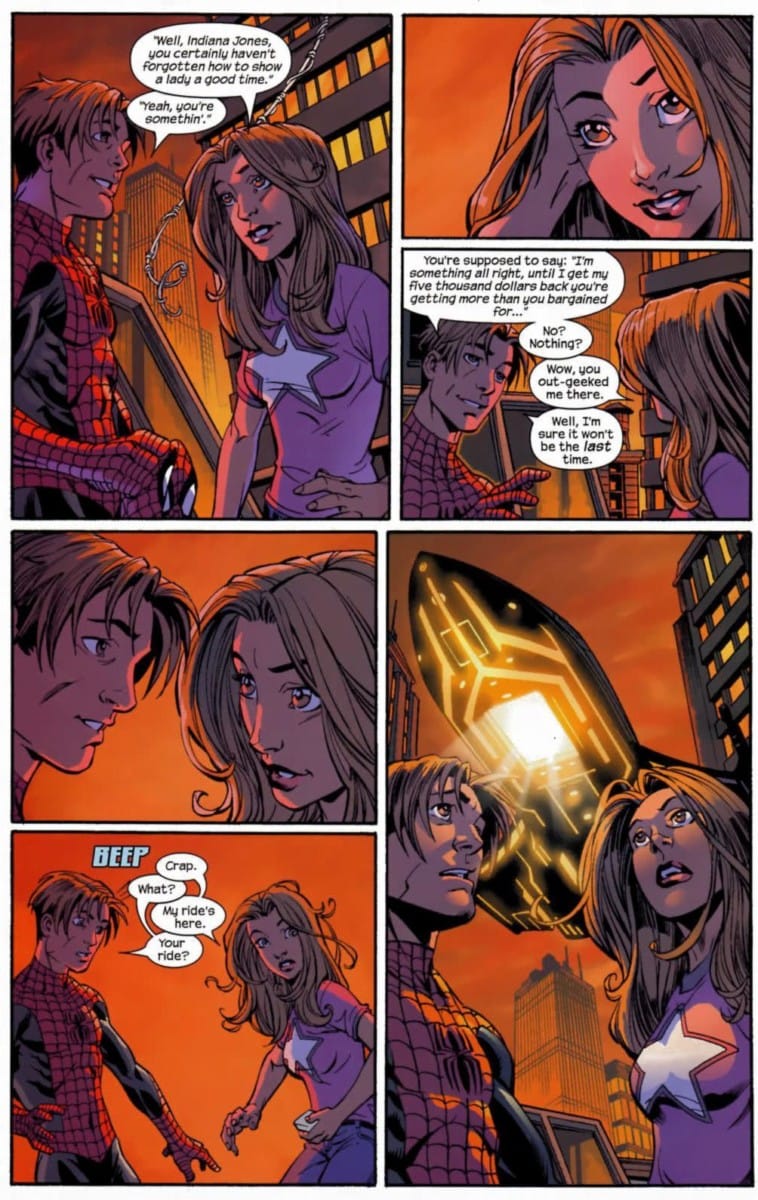 I can understand this mindset. It occurs in other aspects of literature. We have our mystery section and our romance section, as well as realistic fiction and science fiction. Yet even here, there are many who will argue that these categories hurt the reputation of books falling under these genres and authors who write them. Kurt Vonnegut is possibly the most famous author to go through this. “I became a so-called science fiction writer when someone decreed that I was a science fiction writer. I did not want to be classified as one, so I wondered in what way I’d offended that I would not get credit for being a serious writer.” He’s making light of his situation here, but it’s true: who did he offend? Because of its stigma, science fiction is hardly ever considered canonical while realistic fiction usually is, and Vonnegut knew this. His literature is often perceived as juvenile because of this categorization.

In UNDERSTANDING COMICS: THE INVISIBLE ART, Scott McCloud states that “comics are juxtaposed pictorial and other images in a deliberate sequence, intended to convey information and/or produce an aesthetic response in the viewer.” In this book, McCloud spends a good amount of time defining what exactly comics are and how unique and special the medium is. There’s a solid chapter where McCloud goes over the vast history of comics, eventually reaching the American superhero genre, the same genre many today associate with the medium. Perhaps some cannot create the disconnect between different types of storytelling within comic books, or maybe the idea of having images next to words is too similar to childhood picture books. It’s even possible that having a specific term like graphic novel allows some to reconcile this disconnect by giving mature comics a sort of exception to the stigma of comics. Regardless of the circumstance, this type of thinking is a shame. Because for every lame Spider-Man or Superman line in one issue, there’s a touching and life changing piece of comic book literature in another. 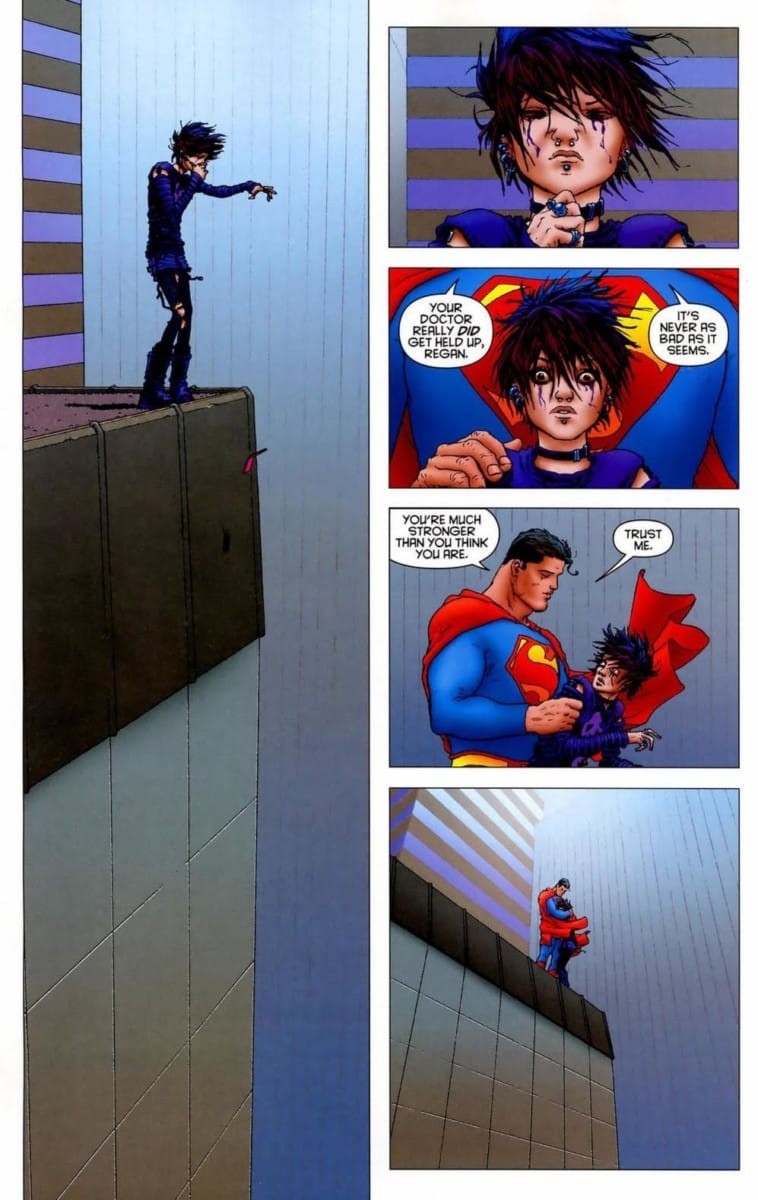 Like any other piece of writing (or art for that matter), it’s very dependent on who is creating the material. There are some writers like Grant Morrison and Alan Moore who challenge the medium by layering their stories in such dense ways. Other writers focus heavily on dialogue and character development like Brian Michael Bendis. Then there are writers like J. Torres, who do in fact appeal to a younger audience with books like TEEN TITANS GO! Just like fiction, there are simply different levels in comics that vary in maturity and style. This has nothing to do with the medium, but the style of writing. Just because something is featuring, say, the Justice League, doesn’t mean serious subject matter isn’t being portrayed (see: IDENTITY CRISIS). As we fans have seen throughout our history of reading comic books, the stories being produced can be just as gruesome as a Quentin Tarantino film or as sincere as a John Steinbeck novel. Too many people wish to categorize, to place subjects within confined boxes instead of allowing them to breathe and eventually slip into the lives of a potential new fan. This happens in film, this happens in literature, and this happens in comics.

Comic books: if you’re reading this article, you probably love them. There’s also a decent chance you toss the term graphic novel around when talking to friends who aren’t familiar with the medium, but why not simply call it a comic book? Your definition will radiate and be repeated by those around you, those who aren’t as familiar with the medium. Why does it matter? If comic books are going to continue their trend towards being treated as serious pieces of literature, then the vocabulary dealing with them is going to have to shift as well. The connection many have with comics and adolescence may be a hard one to sever, but using a term like graphic novels to talk about ‘serious’ comics only hinders the medium. It comes off as being ashamed in a sense, like saying graphic novel sounds more mature. Well, it does, but that’s only because of the stigmatization of comics, which needs to end sooner rather than later.