Ever since 2008, Marvel Studios has been building towards a shared universe starting with the first IRON MAN movie. Nine years later, the MCU has fifteen movies and five television shows within their universe. While the movies always show connections between each other, the events of the films have little impact on what happens on television. What happens on television has no bearing on what is going on in the movies.

Villains and events that take place in the movies are mentioned in the television show, but they are not relevant to the story arcs that take place on the show. The last time a movie impacted the show was when CAPTAIN AMERICA: THE WINTER SOLDIER had both S.H.I.E.L.D. and HYDRA dismantled.

After that, Ultron was briefly mentioned on the show. The Civil War and the Sokovia Accords are mentioned but do not pose much of an impact; and, magic and the supernatural play a small role in the latest season of the show.

AGENTS OF S.H.I.E.L.D. premiered on the ABC television network in 2013 with the premise surrounded by Agent Coulson. Coulson was last seen killed by Loki in THE AVENGERS and has come back to life. He will now lead a small team of SHIELD agents to handle the neighborhood new and strange cases. Little did he know they are quite unusual themselves.

READ: DEFENDER #1 Made It’s Debut This Wednesday, Check Out The Review! 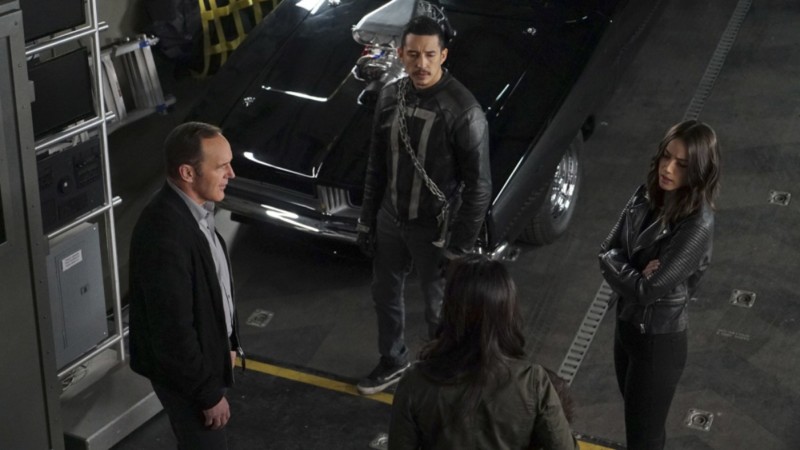 The first season of the show had Samuel L. Jackson and Cobie Smulders guest star a few times to set up the S.H.I.E.L.D. missions. Samuel L. Jackson is known for playing Nick Fury, Former Director of S.H.I.E.L.D. while Cobie Smulders reprised her role as Maria Hill, the right-hand agent to Nick Fury. Near the end of the first season, CAPTAIN AMERICA: THE WINTER SOLDIER came out in theaters which revealed S.H.I.E.L.D. had been taken over by HYDRA. That soon lead to S.H.I.E.L.D. in chaos and a betrayal within the central team.

After that season, AGENTS OF S.H.I.E.L.D. started isolating itself from the rest of the universe. Entire seasons were no longer built from plots of Marvel movies. Instead, the team was doing their own thing separate from THE AVENGERS. The guest stars were scaled back as well. Around the time of AVENGERS: AGE OF ULTRON, Maria Hill was on screen for two minutes getting information from Coulson about the location of Baron Von Strucker; something not even mentioned in the movie. Lady Sif, a supporting character from THOR, appeared on the show for two episodes but did not mention coming to Earth to support S.H.I.E.L.D. at any point within the two THOR movies.

READ: Want to know more about Marvel’s Inhumans? Find out how the Royal Inhumans are coming to the MCU!

While it is a wise decision to have the television show take a step back from what is going on in the movies, the plot lines within the show should be grand enough to catch the attention of someone within the movies. For example, the second season of the show revolved around people all over the world waking up to find that they are Inhumans and have actual superpowers. That is something that should be seen in at least one of the Marvel movies.

In the latest season (season four), to show the more mystical side of the MCU, Ghost Rider showed up. In the beginning, to stop a book of dark magic from getting into the wrong hands. DOCTOR STRANGE came out around the time this storyline was taking place. It would have made sense for DOCTOR STRANGE to be aware of this book; however, since the book was on television, DOCTOR STRANGE or anything that happened in that movie is never mentioned within the show.

“The Marvel Cinematic Universe loves to pretend that everything is connected, but then they don’t acknowledge our show at all.”

The reason for the divide between the television and movies of the MCU could be the film studio head, Kevin Feige, was in a feud with, Marvel Entertainment CEO, Issac “Ike” Perlmutter. Kevin Feige first had to report to Perlmutter but eventually broke out with help from Disney CEO Bob Iger. Perlmutter was not a fan of the budget of CAPTAIN AMERICA: CIVIL WAR. He wanted to scale down the budget which probably did not work with Feige’s vision.

CLICK: The Future Of Spider-Man In Film? Look At A Future Look Of Spidey Himself!

After the split from the New York Division of Marvel Entertainment, Feige now answered to Disney Studios chief Alan Horn. Marvel Television, however, still reports to Perlmutter. Since the feud between Feige and Perlmutter, these two do not work together to see how the TV and Movies could collaborate with each other and show a better and stronger connection between the two.

While one can argue that the television and movie sides don’t need to connect. I think it is more fun and more exciting when they do. They do not have to go as far as putting these agents in every movie; or, even, looking over everything that happens within the MCU. It would be fun and possibly interesting if they explore the consequences of the Sokovia Accords on the show. Even, if the movies could show Inhumans popping in and helping save people while the Avengers fight whoever.

The Marvel movies should not be afraid to acknowledge that S.H.I.E.L.D. still exists and that the AGENTS OF S.H.I.E.L.D. are helping from the shadows.