How often does this happen to you? You’re sitting in a theater, waiting for a movie to start and trying not to lose your mind because the guy sitting a couple of seats over has spent the last ten minutes waging a war against an uncooperative Snickers wrapper. Then BAM! The room goes dark, and the screen lights up. The previews begin. The rest of the world disappears, and you spend the next two minutes watching the coolest trailer you’ve ever seen. 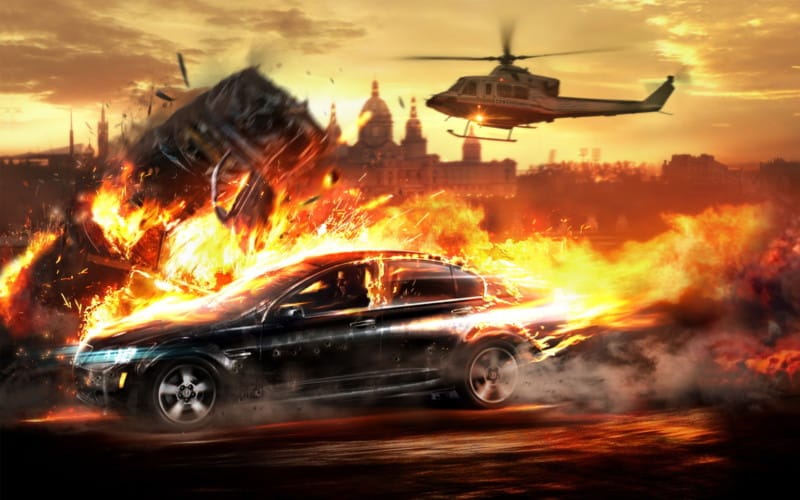 Explosions! Shootouts! Car chases! A cool protagonist is saying witty things while beating up bad guys! It looks like the perfect action movie. Then you hear that dreaded phrase: “Rated PG-13.” In an instant, your hopes are dashed. You lose all faith in humanity. You finally snap and attack that inept man with the ear-piercing candy wrapper. Then you’re escorted out of the building and told never to come back. If you’re like me, then you’ve experienced this a dozen times over. I don’t know about you, but I’m getting sick of it.

For over a decade, the box office has been dominated by family-friendly action films. Movies filled with toothless violence, off-screen kills, and a total absence of gore. Of course, some of these films have been entertaining, but for every great adventure, there is a slew of choppily edited, mediocre snooze fests.

Where’s the grit? Where’s the bloodshed? Where’s the action?! This trend of toned-down violence has caused the genre to grow stale. Thankfully, some recent films have attempted to revisit the genre’s blood-soaked roots, giving modern action a much-needed shot of adrenaline.

Back to Bloody Basics

There was a time when action was primarily considered an adult genre. Studios financed big-budget bloodbaths like DIE HARD, LETHAL WEAPON, ALIENS, and ROBOCOP. Movies packed with over-the-top action sequences that splattered the screen with buckets of blood. Then some Hollywood Hotshot realized that a PG-13 rating would expand the audience and increase profits. Theaters were suddenly swarmed with tame action films that the whole family could enjoy. Movies that are appropriate for kids but offer enough thrills to keep adults interested: FAST AND FURIOUS, the MCU, TRANSFORMERS, etc.

Even though a few mature shoot-em-ups still manage to make their way into theaters, they typically have lower budgets, a small-scale release, and they rarely receive the attention that they deserve. Fantastically gory action movies like DREDD, CRANK and THE RAID have sadly achieved little more than cult status. However, there is still a glimmer of hope for us blood-thirsty action junkies.

However, a handful of recent projects have captured Hollywood’s attention, causing studios to reevaluate the potential of hard R action flicks. Films like JOHN WICK, KINGSMAN: THE SECRET SERVICE and MAD MAX: FURY ROAD (the greatest action movie ever made!) have demonstrated that a film doesn’t need to be rated PG-13 in order to turn a profit. However, it wasn’t until DEADPOOL that things started to get interesting.

DEADPOOL was a massive success, becoming the 6th highest grossing film of 2016. It proved that there’s an audience for R-rated superhero movies, opening the door for some edgy adaptations. In 2017, we finally got to see Wolverine get his claws dirty in LOGAN, and an adaptation of ATOMIC BLONDE (a comic that puts the “graphic” in “graphic novel”) will be released later this year. With more and more comic book movies dipping their toes into this pool of blood, it’s clear that R-rated action is making a comeback. So what does this mean for the genre?

Aside from some vulgarity and the occasional nude scene, the biggest difference between an R-rated action film and one that is PG-13 is the amount of violence that can be shown on screen. An R-rating gives a movie the freedom to depict just about any graphic image you’re twisted little mind can conjure, but when attempting to land in the PG-13 range, studios will bend over backwards to ensure their film meets the MPAA’s standards. This means avoiding bloodshed and cutting action sequences so that the violence does not seem too realistic. While a film’s quality shouldn’t be measured in blood and guts, too much censorship can butcher a great action scene.

READ: Have a hankering for R-rated comic cook movies? Check out our review of LOGAN!

Editing can make or break a film. This is particularly the case for an action movie. If I had a dime for every time I was left totally confused by an overly edited action sequence, I would probably have a couple of dollars. Cutting a film is an incredibly difficult task and one that is very easy to screw up. An editor has so many factors to keep in mind: pacing, flow, scene transition, continuity, amongst many others. But the most important aspect is whether or not the audience can understand what’s going on in a given scene. Even the simplest of moments can become utterly baffling in the hands of a mediocre editor. For example, watch this scene from TAKEN 3.

What was that?! Seriously, what the heck was that?! How many cuts does it take for Liam Neeson to hop a fence?!  Now, check out this example of great action scene editing from THE RAID: REDEMPTION.

Notice a difference? The first clip somehow manages to be both incredibly short and frustratingly unclear. The second is longer, far more complex, and is still crystal clear. The scene is chaotic, but you can easily understand every single set piece. Like the first scene, it contains several cuts, but here they are in service of the action. All of the shots flow together so smoothly, and each cut is used to amplify the violence. It makes it feel more visceral and intense.

This ability to show more of the violence also helps enhance another aspect of the film. When you can see the full brutality of the violence, it makes the action feel real. This raises the stakes which help the audience become invested in the scene. Just look at this scene from the original OLDBOY.

This scene shows the full extent of the violence. It doesn’t feel like a bunch of stunt doubles acting out an overly-choreographed fight scene. It seems like a group of living, breathing human beings fighting for survival. Our protagonist seems like a real person facing insurmountable odds. We can relate to him, and we’re hoping he succeeds.

READ: Find out why realism doesn’t work for every movie!

The R-rated action is about more than seeing blood and gore on the big screen. It’s about pushing the medium as far as it can go. It’s about making films as great as they can be, free of the restrictions set by some mysterious rating boards… Also, violent action looks really, really cool.