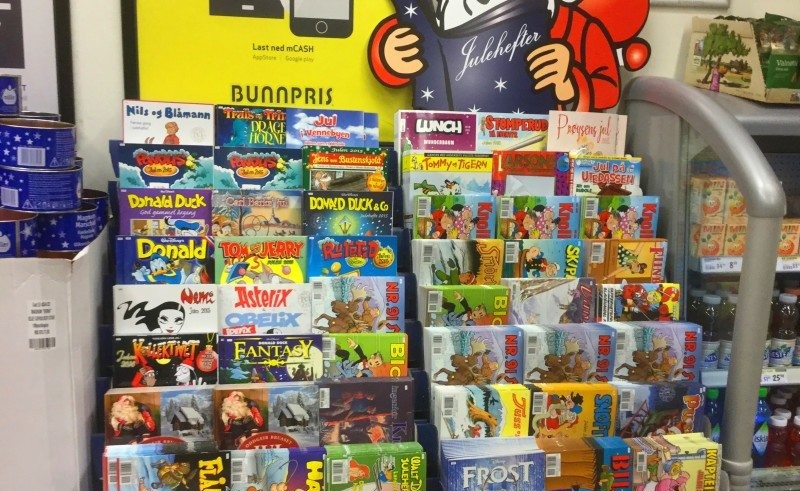 In frosty Scandinavia, the Norwegians have many more or less weird Christmas traditions, such as watching a New Years sketch on TV the day before Christmas, instead of on New Years Eve. They also go trick-or-treating, Yule-goat style, during Boxing Week. However, for hundreds of thousands of Norwegians, adults and children alike, reading special Christmas comics is a cherished tradition that seems to have been part of Christmas forever. Come late November, collectors, comic fans, and ordinary celebrators trek to bookstores and shops to fill their baskets with annual comics that are not only entertaining but are also part of Norway’s way of building its own identity. 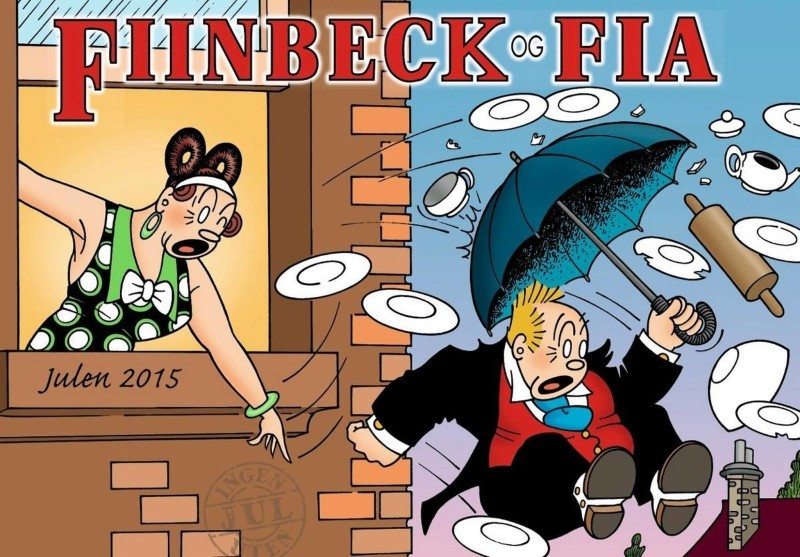 So, Norwegians buy comic books as an Advent ritual. But what exactly are in the special Christmas comics?

Traditionally published in a wide format, typical modern editions range from Christmas-themed specials of new comic franchises, such as goth girl NEMI (a popular Norwegian monthly), to reprints of nostalgic classics, to new adaptions of old movies or characters, such as GRANDMA AND THE EIGHT CHILDREN and PRIVATE DETECTIVE VARG VEUM. This year, about half of the 50 different magazines are Norwegian franchises, but American comics are well-represented, with various Disney titles making up half a dozen. Carl Bark’s Christmas has since 2005 offered cleaned-up reprints of the Disney maestro’s seasonal classics, while other typical imported Christmas comic books are POPEYE, TOM & JERRY, CALVIN AND HOBBES, BLONDIE and HAGAR THE HORRIBLE, which are all previously known to generations of Norwegians as newspaper strips, from weekly magazines, or their own comic books.

Actually, as far as the content of the Christmas annuals go, there is almost no rule, and Christmas relevancy is not an issue. Reprints of the Belgian Wild West comic SILVER ARROW, originally published in the 1970s and 80s, or the Norwegian science fiction comic Engineer Knut Berg that originated in 1941, have nothing to do with Christmas and everything to do with nostalgia and tradition. One-shots adapted from other media appear too; in 2011, the Czech movie THREE WISHES FOR CINDERELLA (1973) was re-told in its own photo-comic. Even though the movie is not about Christmas, it has aired on Norwegian TV every Christmas Eve for 39 years, with a single, deep-voiced actor dubbing all the dialogue, a tradition that apparently was worthy of a Christmas magazine of its own.

Non-comic annuals are also tested. This year, actor-singer Herborg KrÂkevik has compiled CHRISTMAS ROSES, a collection of essays and artwork from some of Norway’s most prominent authors and painters. This particular annual reinvents an old literary annual that was published from 1882 to 1944. Last year’s one-shot, the magazine version of Oddgeir Bruaset’s popular TV documentary WHERE NOBODY THOUGHT ANYONE COULD LIVE (yes, that is the title of the series that has aired since 2002) got its sequel this year. It too is not a comic, but a holiday revisit to the places and people Bruaset met in his TV series. 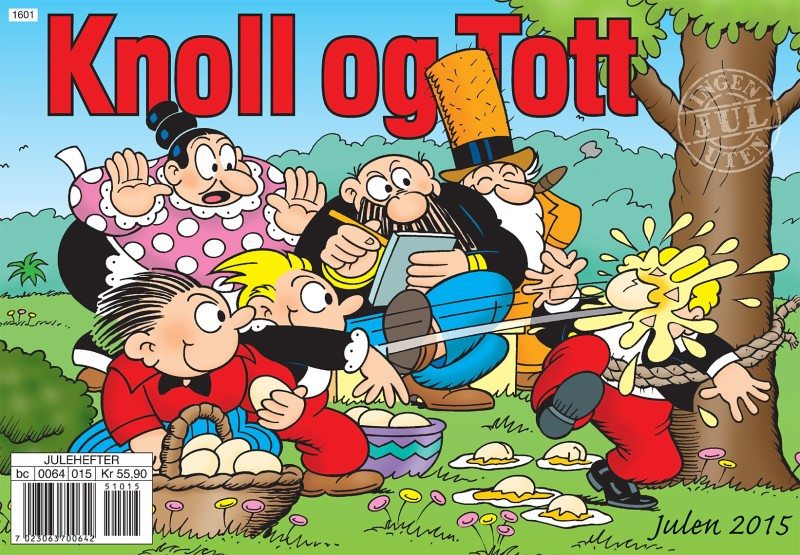 However, most Norwegian Christmas annuals are comics, a tradition that goes back 101 years. Now considered an integral part of the Christmas period, the general concept of pre-holiday annual magazines dates as far back as 1817, when the first Norwegian Christmas annual came out. The earliest annuals offered recipes, stories, and artwork, but by the early 1900s, the concept had evolved, and in 1914 the first annual Christmas comic book arrived in stores. It featured THE KATZENJAMMER KIDS, as created in the US by German immigrant Rudolph Dirks in 1897. Ironically, the magazines came about thanks to widespread poverty among Norway’s farmers, fishermen, and factory workers – only at Christmas would one fork out money for reading material. In 1918, a worker had to toil for two hours to afford just one magazine.

Throughout the following decades, demand was strong enough to develop a small but healthy Norwegian comics scene, originating annuals that still exist today, such as NILS AND BLAMANN (1927), BUTTERCUP (1938), VANGSGUTANE (1940) and TUSS & TROLL (1945). Around World War II, the focus changed to Norwegian editions of imported franchises. TARZAN and THE FLINTSTONES may not but your typical Christmas entertainment, but the Norwegians had other ideas. American comics like BRINGING UP FATHER (a Christmas annual since 1930) and BLONDIE (since 1941) are still published in Norway, thanks to the annual editions. TV also challenged printed entertainment, but as Norway only had one TV channel until the 1980s, the habit of buying Christmas comics remained, not only among children, for whom comics were the go-to medium, but also for adults, who had grown up with Christmas comics as part of the festivities.

CLICK: Bill Watterson, author of CALVIN AND HOBBES, on the modern comics landscape!

In the new millennium, interest in the Christmas annuals has reached new peaks, thanks to contemporary homegrown comics. In the years 2011 and 2012, as many as 60 different annuals were released, although the publishers found that that was too much of a good thing. A reduction was agreed upon, and this year a total of 50 titles are rolled out, with the dominating publisher, Egmont, releasing 35 of them. With total sales of about 1.3 million, the two or three best sellers reach print runs of 160 – 190,000 copies, such as the army based NO. 91 STOMPERUD, about private Stomperud’s attempts to go home for the holidays. NO. 91 STOMPERUD is coincidentally the oldest Norwegian produced comic that is still producing new stories; it was first published in Norway in 1937. Many of the annuals are printed in quantities of tens of thousands, outselling most of the regular comics that come out the rest of the year. These days, more adults than children read the annuals, and with the large variety on offer, there is something for everyone’s taste.

So how did all this come about? Why did luxury items like comic books become a staple in the Norwegian Christmas tradition?

Again, we have to look at history. In 1905, Norwegians won their independence from Sweden, and were eager to establish a Norwegian identity through arts and culture. The Christmas comics not only coincided with this desire, they also fueled it, as the comics often promoted Norwegian characters, language, ideas, and habits. One example of that is the goody-goody VaANGSGUTANE – (THE VANG BOYS) – who were a reaction against the unruly KATZENJAMMER KIDS, who could not be described as excellent role models. Once the tradition had been established, its grip would not let go. 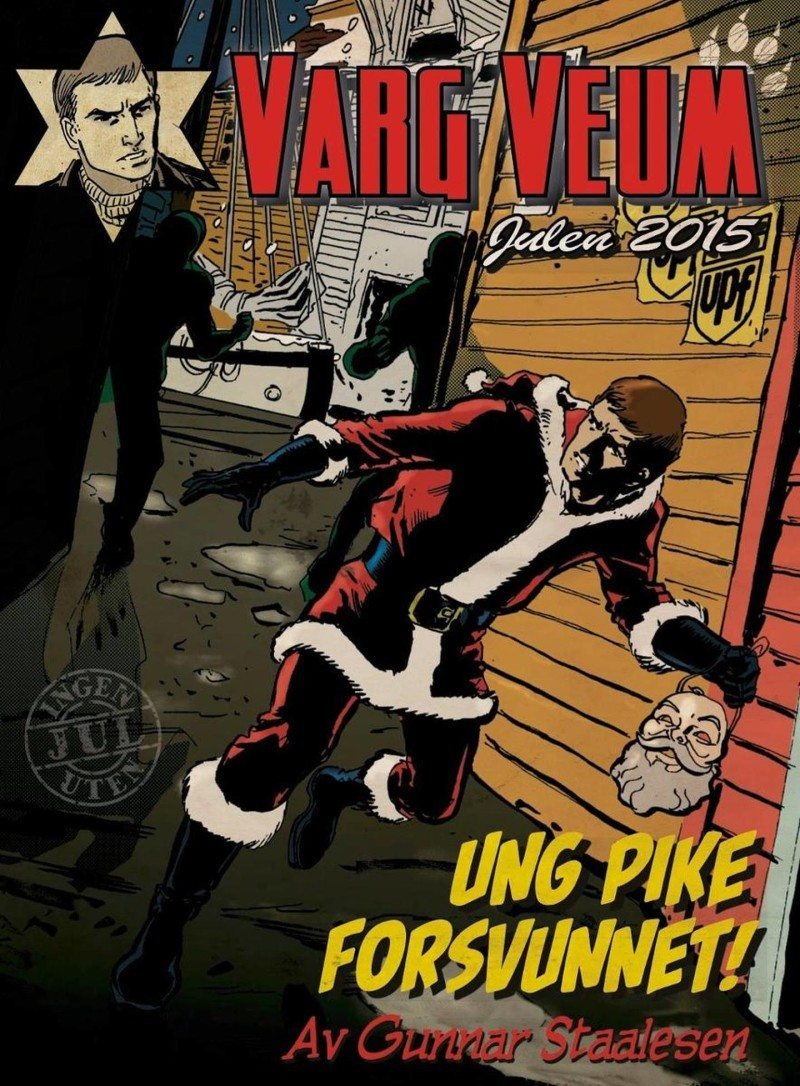 Haakon W. Isachsen is one of Norway’s biggest experts on comics and Christmas magazines. Not only has he authored two books on the subject, he is also Egmont’s chief editor for the product segment. He argues that the Christmas annuals are still an important part of Norwegian popular culture:

“Today nearly half the titles are created by Norwegian comic artists. Even though the specials don’t carry the same weight and significance in the national consciousness as they once did, I still think they are important. In a media reality that is more and more global, with products honed for an international market, where any and all signs of local culture, society, and tradition is chipped away, the Norwegian Christmas magazines play a part in upholding Norwegian culture and traditions. That goes for both newer titles like PONDUS and GRANDMA AND THE EIGHT CHILDREN, and, of course, the older titles.”

Isachsen is also the author of this year’s FLAKLYPA comic, and with a lot of bias he lists it as one of his favorites. He also recommends VARG VEUM, which he also worked on:

“It is well made, it is Mike Collins’ best work so far this year, and I also like it because it upholds the dwindling tradition of epic stories as opposed to humorous strips in the Christmas specials.”

LISTEN: Digging all this history?  Check out our podcast on THE CARTOON HISTORY OF THE UNIVERSE!

“The Christmas comic books traditionally consist of recycled old strips and stories. But in later years, creators like B¯rge Lund with his comic Lunch and Torbj¯rn Lien, who authors KOLLEKTIVET, have made special seasonal stories, and old characters like STOMPERUD and VANGSGUTANE have gotten much-needed reboots. In some cases that makes them worth picking up also for readers like me, who, to be honest, lost interest years ago. For the future, however, I would like to see the publishers take more chances. I am sure there are quite a few comic creators who would really enjoy coming up with new concepts. And hopefully, there will be an audience for new Christmas concepts too.”

One of the new comics that has helped promoting the annuals phenomenon is FLAKLYPA’s first foray into the comic medium. FLAKLYPA is a series of books, stories and characters by Kjell Aukrust (1920 – 2002), one of Norway’s most beloved authors and illustrators. The franchise, which has been around since the 1950s, deals with the adventures and demeanors of some very Norwegian characters, famously adapted in the 1975 stop motion-animated feature film PINCHCLIFF GRAND PRIX. As an example of an old and familiar set of characters being transformed into a new medium, the first ever FLAKLYPA comic book was a Christmas annual in 2004, a premiere that coincided with a whole wave of new Norwegian comics emerging in the late 1990s- early 00s. In addition to the mentioned Torbj¯rn Lien and B¯rge Lund, artists such as Frode ÿverli (PONDUS) and Lise Myhre (NEMI) ushered Norway’s comics scene into a second golden era. In less than 10 years, Norwegian comics got hotter than ever and reinvigorated interest in comics among younger and older adults. It had been a while since comics were the preferred medium for the entertainment-hungry, but apart from establishing a contemporary Norwegian comics scene worth speaking of, these new authors also strengthened interest in Christmas comics, a trend which has lasted for 10-15 years.

Comics were for a long time seen as second rate entertainment for children in Norway and elsewhere, but today, thanks, to a large extent, to Christmas comics being bought, read, and enjoyed by the generations that grew up on comics in past decades, the ninth art form is more respected. Academic attention and heavy newspapers contribute to the recognition of the medium, as does the fact that local comics outsell foreign titles, and not just at Christmas – PONDUS’ montly edition is Norway’s biggest selling magazine of any kind throughout the year. While action and superhero comics virtually got extinct in the 1980s and 90s, and former imported hits, such as DONALD DUCK, dropped 80% in sales, the Christmas annuals were never really threatened.

For some, the annuals are a way of adding reprints of long lost classics to their collections, or simply an excuse to relax on the couch. However, for many Norwegian adults the Christmas annuals are the only comics they still buy and read, even though the custom often is attributed to pure nostalgic memories of a time when comics were a natural part of the cultural diet. Thousands of Norwegians will simply not get into the Christmas spirit without reading the somewhat silly, old, and non-Christmasy stories in SNUFFY SMITH or BEETLE BAILEY. One of the appealing sides of Christmas seems to be that some things are just the way they always were. When STOMPERUD eventually makes it back home, deep in the country, far away from drill grounds and colonels and other problems, Norwegians, too, feel they are home on the farm.