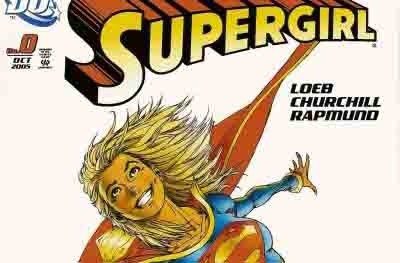 We open in the Batcave. Batman and Superman are monitoring a distress signal from Air Force One. Rather than respond themselves they watch Kara Zor-El, who is “Kal’s” cousin SUPERGIRL, speed off to the rescue. The inner (and open) dialogue of both Batman and Superman express the concerns they have as to whether Kara might be able to stand alone as a hero.

Well, she saves Air Force One alone (Superman shadowing her in the clouds, just in case), but we learn that she is being monitored, not only by Batman from the Batcave and Superman in the clouds, but by The Calculator, who is helping a mysterious “Mister X” watch Kara’s heroics with a different kind of concern – that there may soon be a “second “S” to worry about”.

Kara displays a classic teenage angst towards Kal and the Batman watching over her shoulder. Still, she understands the need for it, she just wants to be able to prove herself to them and to herself that she is ready to patrol and be the hero that is expected of her. She mentions to Batman that she suspects he and Superman are not the only ones watching her, thereby displaying good awareness – one of several attempts for the writers to show that Kara is very well equipped with powers, which by default points the reader towards questions of her maturity instead.

She temporarily teams up with the original Batgirl to fight Harley Quinn and Poison Ivy, but when Batgirl turns out to be Clayface, Kara (who claims to have known it was a ruse) does a great job dealing with all three of them in short order. For this she gets praise from Superman. She has displayed cunning and effectiveness and control. She even jokes around with Kal afterwards. In short, a promising career for a teenage girl with the power of Superman is underway…but not if Mister X can help it…

Subtext: there are a lot of adult males voyeuristically watching the activities of this pretty young girl. She tries to be immune to it, but it obviously bothers her. And well it should. Supergirl after all is a sex symbol, as much, if not moreso than other female heroes. Why? Well, the bare midriff doesn’t help things, plus the flowy blonde hair, and the barely present skirt. She can also strike a heck of a pose. Whoever made this costume for her needs to think a bit about the term “objectify”. Maybe readers don’t mind gawking at Kara because, after all, she can take care of herself, so it doesn’t feel like victimization.

We are first reminded that Kara Zor-El was exiled from Krypton by her family in a similar way to her cousin Kal-El (Superman). In fact, she was meant to find him on Earth as a baby, not as an adult, an unexpected turn of events which changed her destiny considerably. This creates alienation for someone who is already an alien! She was also found by Batman when her Kryptonian escape pod landed (conveniently) in Gotham Harbor. Interesting – she came into the world in the darkness of Gotham rather than the light of Metropolis. These are indications that a tragic story is in the works.

Kara apparently knows Stargirl of the Justice League of America. They seem similar in age though Kara is actually very much older when her suspended animation is taken into consideration. But Kara is actually here with Stargirl with the hopes of finding Powergirl. Powergirl as it turns out claims to be a Kryptonian cousin of Superman as well! So, we learn that there used to be someone named Supergirl in the past AND there’s even a young blonde Kryptonian cousin (with a better bust-size as is pointed out to Kara) of Superman around…is there anything left that makes Kara unique? How can you be an exile from a dying planet where the yellow sun gives you superpowers and NOT be unique? Kara’s frustrations suggest despair to any reader who remembers their teen years, and the readers heart goes out to her.

When Kara and Karen (Powergirl) come together it turns out that they sort of short circuit each other, in fact it’s pointed out that Powergirl’s powers have been on the fritz since Kara appeared on Earth, and when they make physical contact Karen goes into an uncontrollable overdrive. The JLA figured this out without anyone getting too hurt. Kara then tries to bond with Karen (they after all have a rare lineage in common) but Karen wants nothing to do with her citing how Kara’s arrival has caused an identity crisis of Karen’s own. Karen does the superhero version of hanging up on her and just flies off. Kara, hoping to find someone who will talk with her – relate to her – flies to Kansas to try her luck with Superboy. Sadly, she is not welcomed there either, Superboy thinking she’s here representing the Teen Titans who he’s had a falling out with..

Now Mister X sees an opening. He feels the vulnerability in young Kara, registers her hurt, and concludes that she could use a friend. He doesn’t laugh aloud, but it feels like he does. This vulnerability and the villain’s readiness to take advantage of it creates in the reader a true unease. I was worried about young Kara.

So Kara goes to visit Superboy in Kansas. He attacks her almost immediately. The Teen Titans show up and Wondergirl attacks Kara viciously (which Kara handles easily). The last of the Titans show up, and, of note, Starfire, who, after fisticuffs are over claims she has some information Kara will want. Curious…

Apart from the older generation (Diana – Wonder Woman, Kal – Superman, and Batman [she doesn’t know his identity]), no one seems to be happy to see Kara, except perhaps Courtney Whitmore – Stargirl of the JSA. Starfire hovers higher in the sky than Kara (showing her dominance or greater maturity), and she seems fond of Kara, but she is clearly an adult in comparison.

How it must feel for this teenage alien…. Knowing Superman is the greatest hero in the world and that she lives in his shadow (and his colors) is a lot of pressure, especially because Kara was meant to show up at a time when she was a teen and Kal a baby where she was to be his caretaker. The roles are fully reversed. And what’s with all these other Kryptonians?.. Superboy, Powergirl, and none of them happy to see her or even very interested in her. What’s a girl to do. My teenage nieces struggle through middle and high school with enough difficulty; it’s hard to imagine what that would be like if they were freaks, outcasts, and orphans. Supergirl represents that extreme teenage painful discomfort.

Kara begins by visiting the hero team, The Outsiders” who are run by Nightwing. Turns out, (surprise) they aren’t happy to see Kara either. Something begins to seem rather wrong with this equation. That “wrongness” is not overtly apparent in the storytelling, rather, they leave the reader to put the pieces together. The Outsiders fight Kara, she fights back, but in a somewhat dispassionate way. It’s clear by the abilities she has displayed thusfar that if she wanted to she could end this fight before anyone knew it even started. That tells us that Kara isn’t looking for a fight, nor is she looking to be fought with, she’s just looking for acceptance.

Enter Nightwing who breaks things up. I suppose it’s easy to see that while Batman has a dark brooding sex appeal for numerous female heroes and villains it looks like Nightwing might be representing for the younger heroes. In other words, Kara has a crush on him and as much is clear when she plants a big kiss on him (in a fun, heart-shaped cell, thanks to penciller Churchill). She says he’s dark and mysterious but “in a good way”.

But the kiss was a goodbye kiss. When Starfire reveales that the person Kara suspected might be observing her is actually Lex Luthor Kara takes off in a flash to put an end to it.

She arrives in Monument Valley and there, the mysterious Mister X is confirmed to indeed be Luthor, who proceeds to teach Kara not to underestimate him. After a solid trouncing Lex then fires a beam of black kryptonite at Kara which causes her to rather violently split in two. Standing before the figure of Supergirl who is writhing on the ground now hovers a “black Supergirl” who speaks only in (presumably) Kryptonian. Yes folks, it’s the good old evil twin treatment.

Concluding this arc in issue 5, Evil Supergirl whoops Luthor and drops him on the moon, at the lunar base of the Justice League. We learn that Evil Supergirl was sent to Earth by Jor-El’s evil cousin who had nothing less than plans for Evil Kara to dominate (possibly kill?) Kal-El when she found him on Earth. Kara comes to her senses with the aid of a wounded Starfire (she took a kryptonite bullet for Kara) with whom she speeds off to the lunar base to finish things. In a fairly epic showdown involving the Justice League Kara convinces Diana (Wonder Woman) to merge Evil Supergirl and Good Supergirl back together with her magic lassoo. They are after all two parts of the same being. This works and by issues end all is well.

What these 5 issues have told us:

Supergirl is really tough. She feels diminished by her overbearing cousin Kal and by Batman and by Diana who trains her on Themyscira. Upon donning the “S” and becoming Supergirl she learned that respect doesn’t come easy and that being Supergirl doesn’t equal a free ride. Additionally, being a teenager and dealing with younger (and, by virtue, more dramatic) heroes means making friends is really hard. But then, how are heroes supposed to feel when they have spent years fighting and suffering to gain their reputations and uphold their principles just to have another “S” show up in town? The good news is that, in the end (of this 5 issue arc anyway) she seems to find an adult friend in Starfire, at least a good acquaintance with Stargirl, a super-crush on Nightwing (who unfortunately doesn’t seem interested in reciprocating) and gains the respect of Superman, Batman, and Wonder Woman when she openly accepts her role as Supergirl and by acknowledging them as her mentors…for better or worse.

This coming of age story is full of good fight scenes and great inner dialogue by many characters, but more importantly a compassionate treatment of the difficulties of coming of age.. The writing is both crisp enough and deep enough to grab the attention of multiple demographics. If you are a fan of all things Super and also a fan of girl-power and like a “growing up with special abilities” tale (rather Buffy-esque at times) then this is a good run.