In my previous article, I discussed how the female protagonist has had to change in the modern world. The weakening of gender division in fandom has led to women taking more prominent roles in media, and even becoming protagonists in film and television. However, media outlets still often see a “boy/girl” market and try to create female protagonists that appeal to boys, often at the expense of character development and plot.

READ: Interested in this article? Check out Part One to see what female protagonists should avoid doing!

Just because there have been failures, however, doesn’t mean there haven’t also been successes. When these characters are given room to grow and develop beyond a need to appeal to a specific gender, we see much deeper people on screen and, as a result, we become more interested in them. They exhibit qualities that interest us, but they also show plenty of failings too, because dealing with those failings and showing development is when characters become real to us. These are fully rounded protagonists that can appeal to both genders, and there are three in recent history that top the list.

Jessica Jones is the most recent female protagonist (and the first on a Marvel TV series), but at first glance, she seems to fit the ‘boy-friendly’ persona. She is aggressive, sarcastic, rebellious, drinks, fights, and seems to simply be strong and angry. While we see the traits described above, we also see what has caused them. Jones’s forced relationship with Kilgrave has left her with severe PTSD. In the same episode where Jones throws a man through a window, she has visions of Kilgrave that put her into a state of tremendous fear. It’s honest-to-God trauma that she’s forced to live with. Because of this, Jones’ attitude doesn’t feel like a marketing tool; it’s seen as the shield she wears to deal with all the fear, guilt, and pain she feels after her experience. 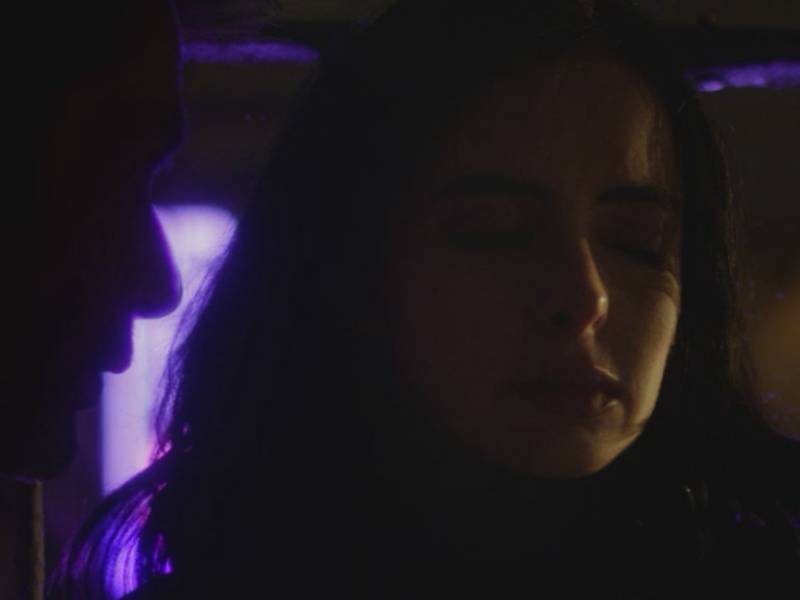 This leads to the penultimate moment of the episode. After realizing Kilgrave is still alive, Jones prepares to fly to Hong Kong in a desperate attempt to escape him. However, before she can leave, she sees Kilgrave’s newest victim forced to commit murder. Faced with escape from her nightmare, or staying to give the help she wasn’t able to get, Jones chooses to stay, even after months of imagining the horrors of Kilgrave on a daily basis. It’s a powerful moment, largely because it all feels real (even if Kilgrave controls people’s minds). It works as a metaphor for real people with PTSD, victims of rape, or anyone who’s ever been abused. Jones does what those people want to do — stand up to their problems and face the people or event that hurt them. This makes her more powerful than a woman on a movie poster with a gun. It’s also telling that as she takes action against Kilgrave, her attacks stop, and she realizes that he no longer has any power over her. It’s a moment that speaks volumes not only to women but all sufferers of abuse or PTSD, without ignoring the difficulties that come with reaching that point.

Jones does make poor decisions and often rejects the people who want to help her. Perhaps her hardest decision is when she attempts to understand Kilgrave and realizes he simply has no sense of right and wrong. Jones sees she could act as his conscience, and with him, do more good than she could alone and find some measure of redemption (as well as keep Kilgrave from hurting anyone else), but she would have to stay with him. It’s the kind of sacrifice we expect from superheroes, but that’s not the choice Jones makes. Her decision to trap Kilgrave instead is human, and it’s hard to say we would be able to make a different decision. It’s what makes Jones who she is — a flawed person trying to do the right thing as best she can, but on her own terms. That makes her feel real to any viewer.

A character similar to Jones, but less grim, is M’gann M’orzz, DC’s Miss Martian. I’m focusing on her portrayal in the animated series Young Justice, because it was her most widely seen appearance, and contained surprising depth. At first glance, M’gann seemed like a copy of Teen Titans’ Starfire — the cheerful, happy alien who wants to fit in but doesn’t really know how. That attitude did endear M’gann to viewers, but as the show went on, they also saw a darker side to her. M’gann is not one of the heroic Green Martians. She’s actually a White Martian, who are usually portrayed as villains in DC media and are far less humanoid than their green counterparts. 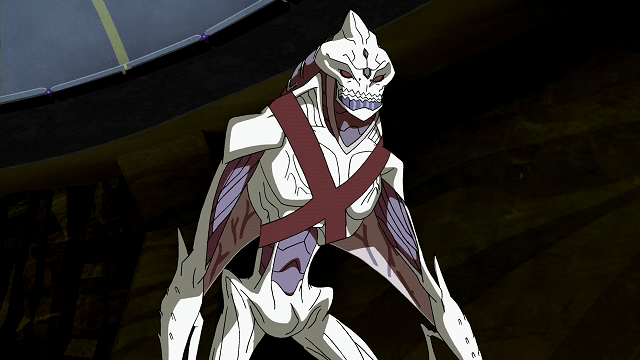 M’gann is so fearful of her teammates finding out, she is blackmailed by supervillain Queen Bee (who knows her true form), but she eventually reveals her true form to the team, despite her fear of rejection. They are shocked, but still accept her (her boyfriend Superboy even admits he had known and was waiting for her to tell him). This showed great depth in a way that, like Jessica Jones, goes beyond gender. Fear of rejection and loss of friends are universal qualities that anyone can feel and be controlled by. What makes them even more telling is that the person who seemed the best and purest was actually controlled by fear. Even her personality was something of an act, as she based herself on an Earth sitcom character (even copying her name).

M’gann’s growth continues in the second season when time jumps ahead five years. M’gann is older and is less restrained with her telepathy, going as far as ripping information out of villains’ minds, leaving them catatonic. Worse, she attempted to manipulate Superboy’s mind when he was angry with her, which causes their breakup (as Superboy has been mentally tampered with in the past). It’s a surprising twist, but it shows how lax M’gann has become. However, her increased use does fit with earlier statements from Martian Manhunter that M’gann had tremendous untapped telepathic potential that could be dangerous. Her abuse of her powers makes her abilities into something almost like addiction — something that’s used over and over regardless of the consequences, because it can make everything ‘better’, even though there’s clearly a toll to pay. Like an addiction, it eventually causes M’gann to make an almost fatal mistake, leading her to realize her own flaws and start to change. 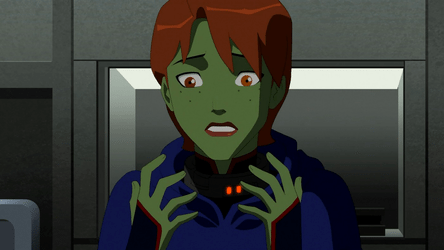 This, again, demonstrates a character with strong morals hiding a dark secret, but it also shows how easily power can corrupt anyone. M’gann starts abusing her telepathy in order to do good, but it becomes a crutch for her, and she exercises less and less control in her use. She even tries justifying her abuses as beneficial, and to quote Dennis O’Neil, writer of BATMAN: VENOM,

M’gann may have started the series resembling Starfire, but in two seasons, she went through blackmail, lies, self-denial, and the beginnings of healing. She wasn’t an attempt at creating a giggling female — that was just the costume she wore to disguise her own problems. Masking herself was a process she did over and over again, first with her identity and then with her own abilities. She felt more real because she was flawed, despite seeming so innocent at first. Like Jones, she made wrong choices, again and again, even destroying her own relationships. It’s part of what makes M’gann such a strong character — she’s a hero who continually makes mistakes, but never stops trying to be the best hero she can be.

READ: How has illness been shown on the printed page? Find out the best examples here!

While Jessica Jones and M’gann work as female superheroes, there is another female protagonist that may prove to be an equally memorable character. That is Mabel Pines, from Gravity Falls. 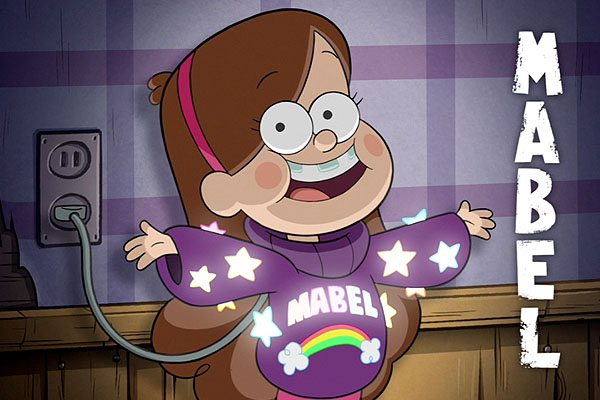 Okay, so obviously this is something of a change from the other two women, but hear me out. I brought up Mabel because she manages to have similar aspects to both Jones and M’gann, but also have an appeal that has crossed to boys and girls. Mabel is similar to M’gann at first glance — another giggly, peppy girl with an overabundance of positivity, and she is, but that’s where her appeal lies.

Mabel’s interests are often stereotypical feminine things — boys, sparkly things, cute animals, unicorns, etc. Yet the show doesn’t portray these traits as negative or even overtly feminine. They are Mabel’s interests, and that’s it. It has nothing to do with gender, just personal preference. It’s not just that perspective that’s different. Mabel may love those things, but she also has no problem standing up for herself and going after what she wants. She’s also willing to reject her interests at times; she literally punches a unicorn when it calls her impure.

So even though Mabel can act like a girl, she can also do more boyish and aggressive things without it seeming out of character. She can appeal to boys and girls for different reasons, all while being hugely entertaining. Yet even all that isn’t enough to fully define Mabel, because she shares one more quality with both M’gann and Jessica Jones — wearing a mask. Her reason is nowhere near as dark as either character, but it’s poignant — Mabel fears growing up. Her actions are simply her way of staying young, but they also force her to ask difficult questions about the future. She fears that she and her brother Dipper could grow apart as they get older, and when she realizes her teenage years won’t be the way movies and TV portray them, she retreats in fear.

In fact, the whole fate of the show hinges on Mabel being able to accept the future. In the series finale, Mabel is trapped inside her own greatest fantasy — a world built from her imagination, where she never has to get older. Dipper, who needs her to help save the world, is forced to take part in a trial that literally pits reality against fantasy. Despite seeing disappointing moments in their lives, and how he helped worsen Mabel’s fear, Dipper makes a passionate argument that while fantasy is comforting, it’s not real. He talks to Mabel and admits he shares the same fears, but that they can face anything together. At that point, Mabel stops being a character that merely represents the viewer. She is the viewer.

Everyone has fears about the future and what might happen. We’ve all been Mabel at one point, no matter our gender. We’ve all wanted to hide in a fantasy where nothing could ever harm us. Like Mabel, we found that we can get through our fears if we have people in our lives to help us out. Watching Mabel not only realize that, but use it to escape her fears and then embark on a massive, butt-kicking mission to save the world all while being herself goes beyond relating to a character. It’s something to take inspiration from, to make you want to go out there and not be afraid of what the world might do to you. All that comes from a girl that does this.

These are the kind of female protagonists that do stick with us. Girls that can fight and shoot are impressive to see, and should always be considered for action based stories, but that’s not a character, that’s a trope. Characters are people that go through hell, come back through, and try to keep going after that. People make mistakes, realize them, and try to make up for them. People that have the same fears and flaws that we do, but never stop being themselves. Those characters are the ones that we remember, the ones that make us feel something about them as viewers. When that happens, gender doesn’t matter.