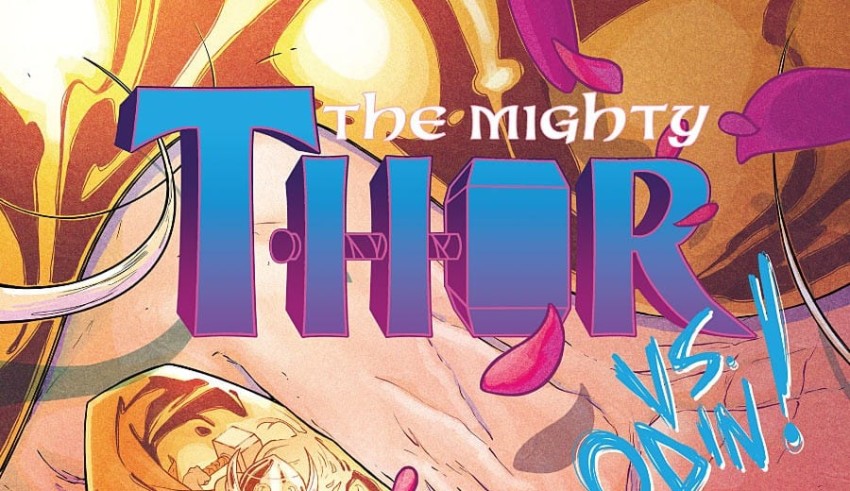 In THE MIGHTY THOR #4 All-Mother Freyja was on trial for treason. Odin himself was about to pass judgement when Thor turned up and punched him with Mjolnir. What a way to end an issue! So you would expect issue 5 to be an all-out epic 20-page brawl between Thor and Odin. Well…no. It’s not. The thing is, it’s even better than that.

Sure, they fight, and the parts we do see are eye-poppingly fantastic, but that’s only the tip of the iceberg. A lot goes down in this issue and there is a huge status quo shift. This one has it all, folks, and I’m still reeling from the implications. 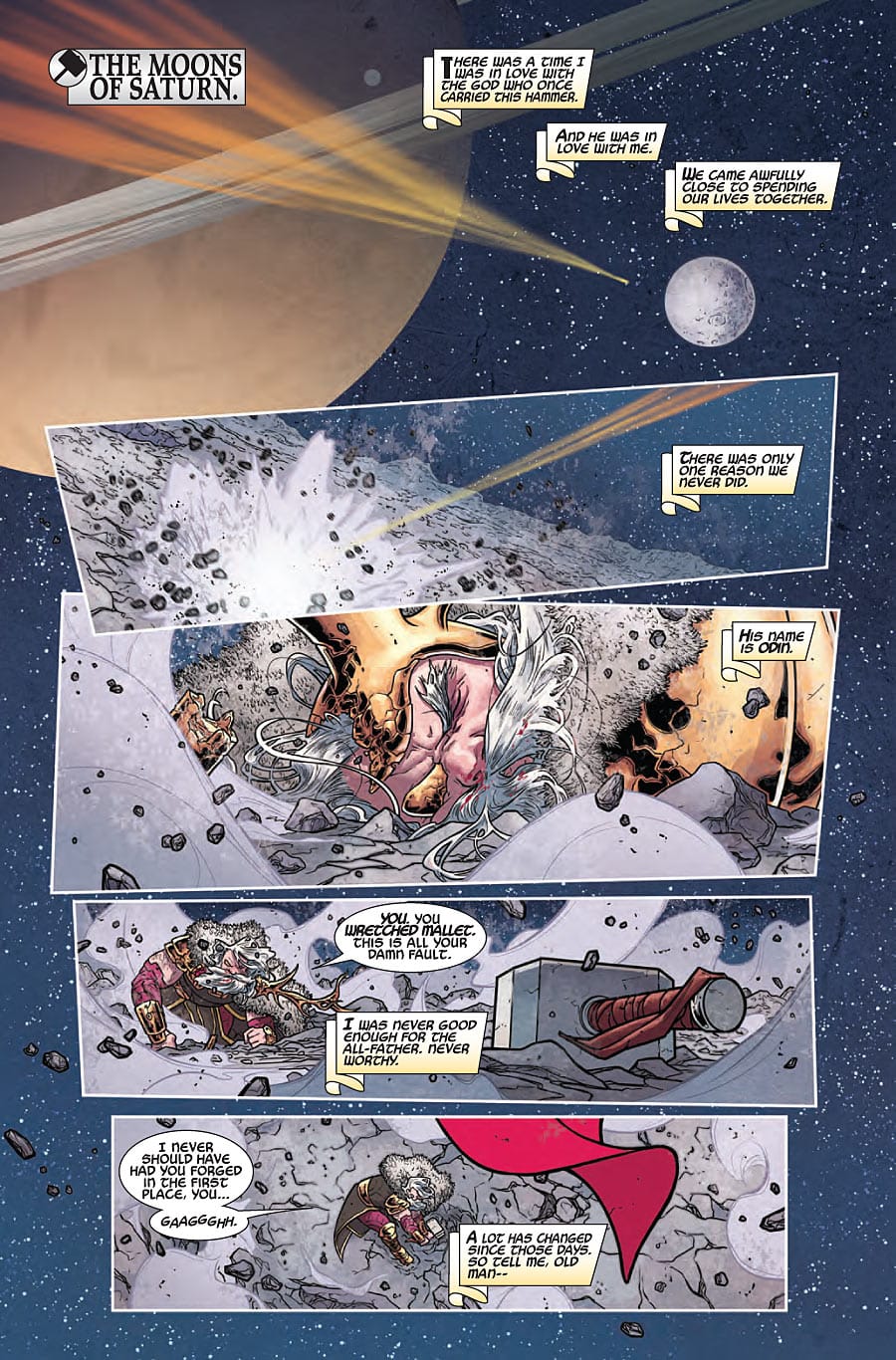 READ: Catch up with the Mighty Thor’s adventures with the Avengers in our review of ALL NEW ALL DIFFERENT AVENGERS #6!

Jason Aaron has been on a roll with his Thor run (I’m already dreading the day he leaves), and issue 5 is another fine example of just why he is so good. We get a hammer-wielding punching contest between Odin and Thor set amongst the stars. We get a civil war among the gods as Freyja, Loki, the Warriors Three, etc. duke it out with Cul Borson, his guards, and the Destroyer. Meanwhile Malekith, having successfully taken over Alfheim, plots his next attack. The issue is packed with action, revelations, and a plot twist I should have seen coming, but didn’t. Loki does something in this issue that will have fans screaming, proving once again that you can never predict the God of Stories’s next move. Strangely, outside of the battle with Odin, Thor takes a bit of a back seat to the plot. But it’s completely forgivable in this instance, as you’re swept up in the drama of it all. 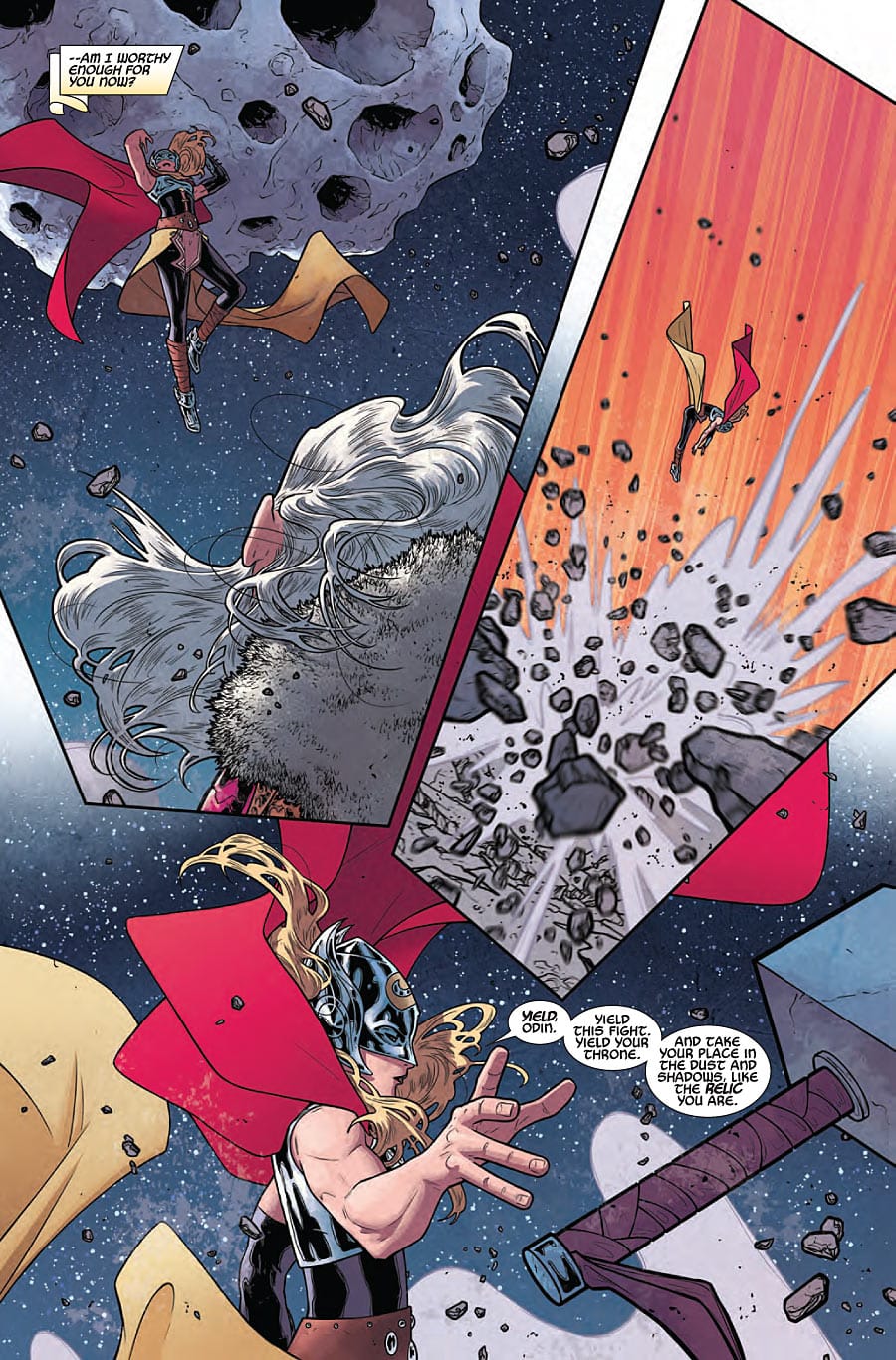 READ: Jason Aaron goes biblical in our review of THE GODDAMNED #1!

Russell Dauterman and Matthew Wilson continue to create a visual feast for the eyes in this issue. With every swipe of Dauterman’s inks, you can feel each punch that Thor rains down upon Odin while Wilson’s colors bring out the hot splash of spilled blood. They add aggressive energy and danger to the civil war between the gods. They build it to such a crescendo that when (censored) happens, it hits you right in the stomach. And then, just before you think it’s over, a major player is reintroduced. I’m exhausted just thinking about it! This issue and run of Thor has been phenomenal, and the best part is that it feels like it’s just getting started.

THE MIGHTY THOR’s creative team is at the absolute height of their powers, and you need to put this comic on your pull list. The power of Thor compels you!