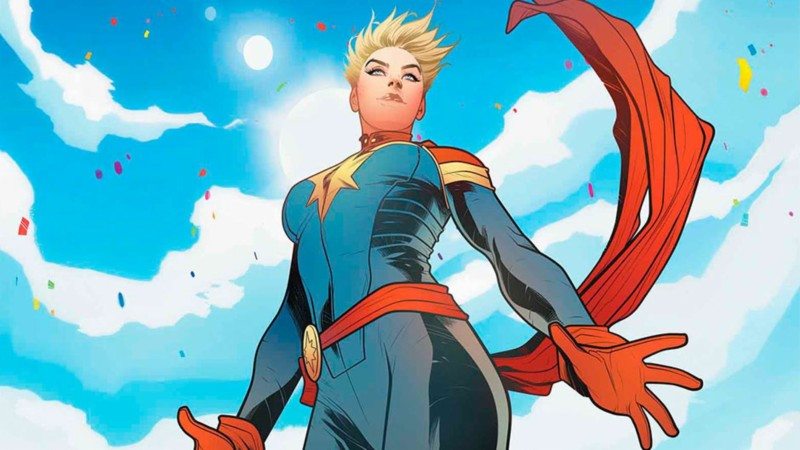 Carol Danvers has gone through a lot of change in the past few years. Not only has she transitioned from Ms. Marvel to Captain Marvel, she’s gone through multiple creative lineup changes in her titles. Kelly Sue DeConnick’s CAPTAIN MARVEL series in 2012 really made Carol a prominent character in the Marvel Universe, helping her ascend to a higher status. She was the character that fought Iron Man (arguably Marvel’s current flagship character) in CIVIL WAR II. This popularity bleeds into THE MIGHTY CAPTAIN MARVEL #1, where Carol finds herself with a plethora of responsibilities. Writer Margaret Stohl and artist Ramon Rosanas build upon the solid network that has grown in the Captain Marvel titles, while setting up plot lines to make it a unique and important series.

This issue opens up on a movie set, where Carol and company watch in humorous horror as cringeworthy dialogue takes place. Carol now has a show based on her life as Captain Marvel, and the finances gained from the show somehow assist Alpha Flight. The first six pages are very enjoyable to me because they deal with Carol in her civilian life. She’s wearing an army green bomber jacket and her hair is looking fabulous. She’s riding in a standard street car, and it all really clicks. 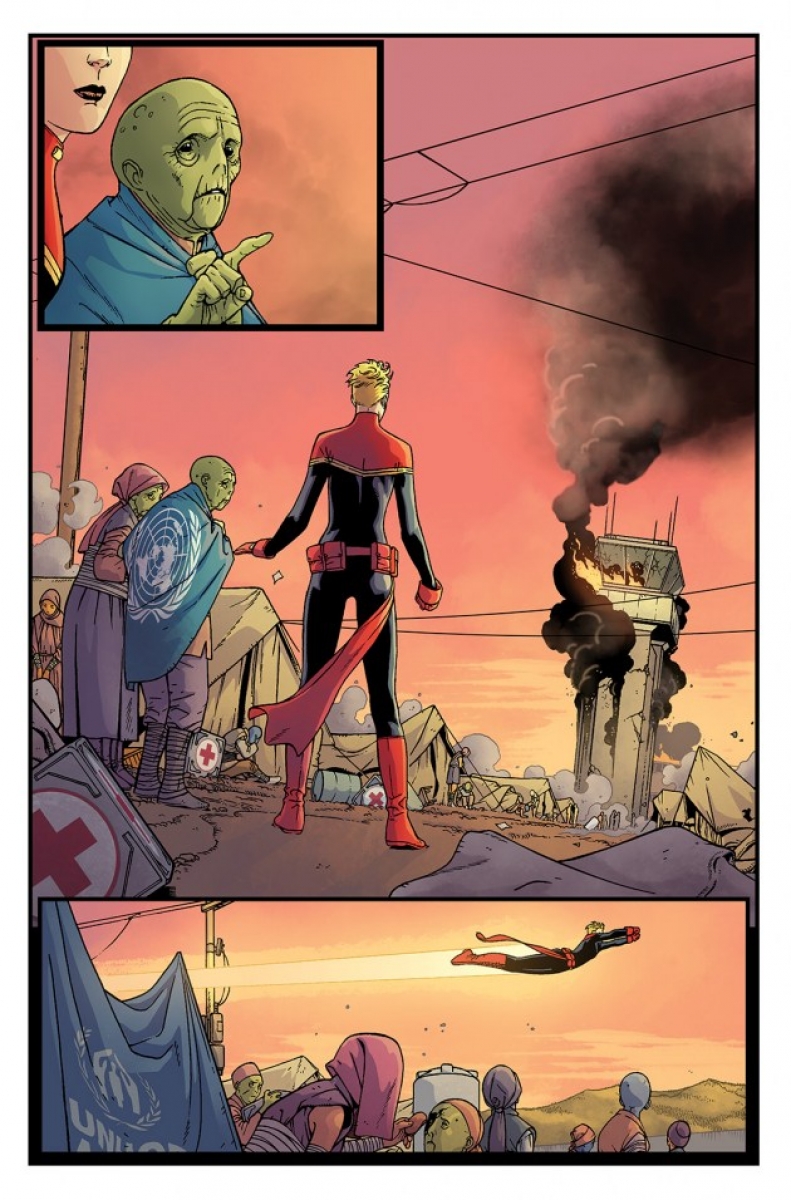 Eventually, word gets out that a refugee camp near The Black Forest is being attacked. Carol notices one of the children is Kree and suits up immediately to fly to Eastern Europe to assess the situation, finding the campsite in shambles. The culprit of the destruction is a rogue army ranger, who attempts to kidnap the Kree child. After a slight scuffle, Captain Marvel is able to rescue the child and take him to Alpha Flight. Carol attempts to teach him what a name is, but she’s only half successful. The issue ends soon after all of this, with Carol meeting with the likes of Black Panther and Captain America to discuss issues, including the refugee crisis. Captain America, who is acting a bit out of character, slightly dismisses Carol and changes the subject to her show, and this angers her greatly. The story then cuts to the closing scene where the rogue army ranger, who is now impersonating Captain Marvel, hints at his motive. 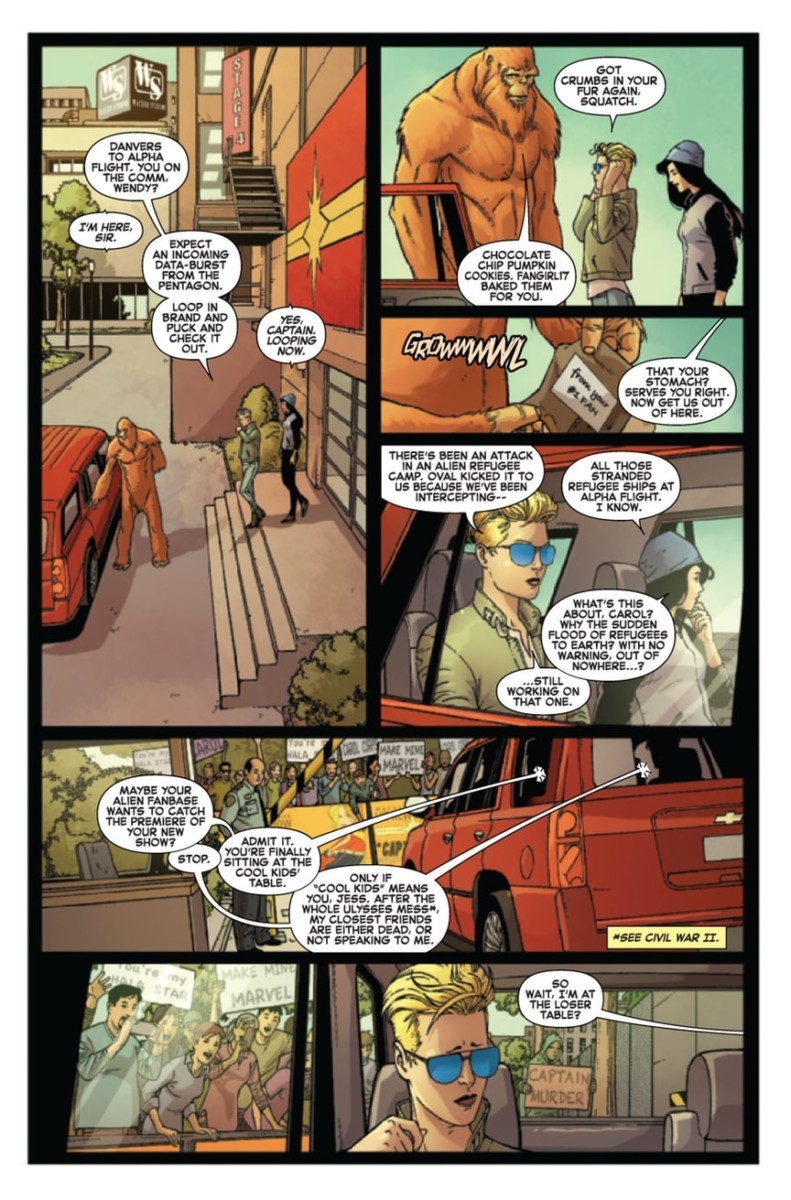 Overall, I’m a bit mixed on this issue. On the one hand, I really enjoy the beginning pages where Carol is just being Carol. This is what made Deconnick’s first CAPTAIN MARVEL series so strong: it shows that Carol is human (and a bit Kree, too). But then on the other hand, I find the art in this issue to be very inconsistent. There are times where the drawings are fitting, such as when characters are standing around and chatting. But then action sequences look awkward and slow, like when Carol is in battle. However, I will say this issue is a good setup. Margaret Stohl doesn’t waste time with introductions, which as a longtime Captain Marvel reader, I’m happy with. If you’re new to the series, you might be a bit confused with Alpha Flight, but you can quickly catch on based on the plot alone.

READ: Here’s our review of CAPTAIN MARVEL #1 from the previous series!

What I like a lot in this issue is the potential of the plot. It’s very relevant to contemporary times with its usage of refugees, and the half concern that Captain America and Black Panther give Carol is something I expect happens a lot when these matters are discussed in governments. Before CIVIL WAR II, Carol struggled greatly with balancing her power. Now she has just as much responsibility, but she appears to have found her humility again. Perhaps its due to her now lack of friends, or the death War Machine is still settling in. No matter what, this is what stood out to me in comparison to the previous incarnation of CAPTAIN MARVEL written by Tara Butters and Michele Fazekas, where her issues in Alpha Flight and CIVIL WAR II focused more on her superhero alias rather than her secret identity. 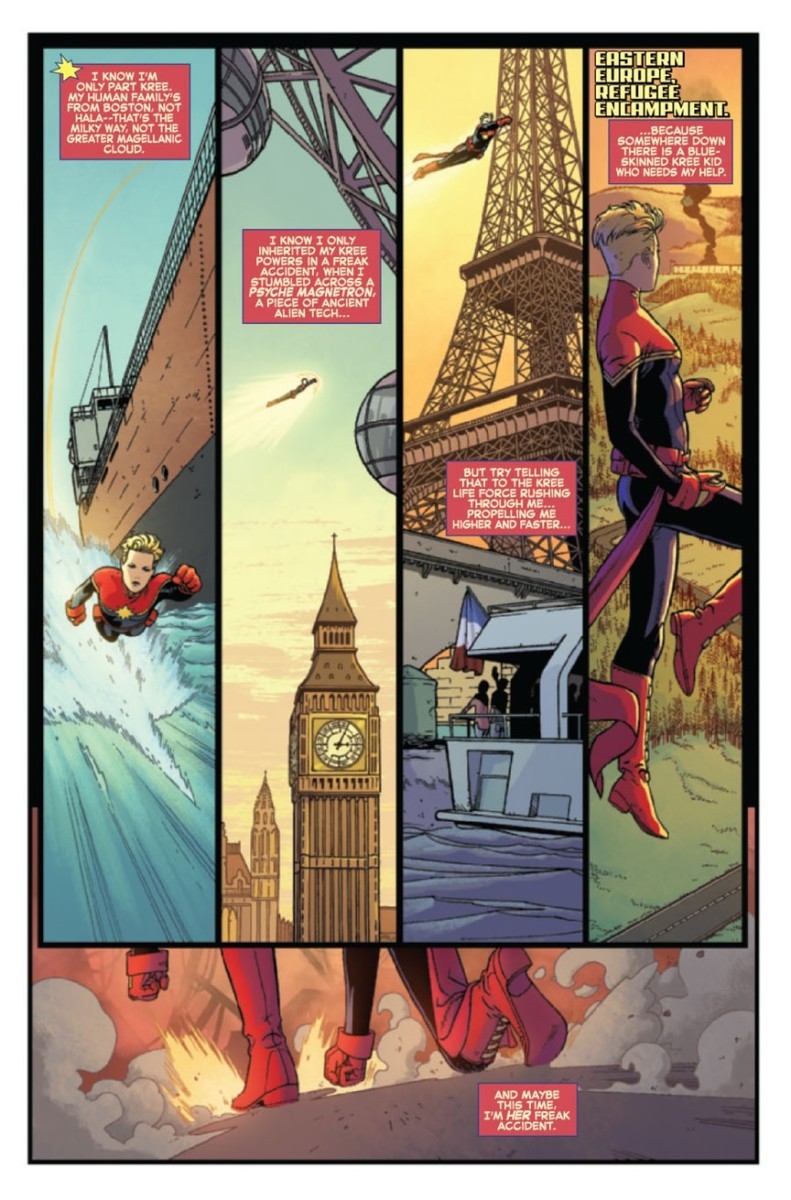 As I mentioned, the Rosanas’ artwork proves to be a bit awkward at times. There is one scene in particular where Captain Marvel is fighting the rogue army ranger. I feel as if I am watching an old Dragon Ball Z episode, where too much talking and not enough action is taking place. I feel as if too many panels go by without Carol actually attempting to rescue the Kree child. While this is probably a scripting issue on Stohl’s part as well, I can’t help but think the art could have just been presented in a more thorough manner. Otherwise, though, I think the art fits the series’s tone. The characters are drawn nicely (I love Carol’s hairstyle) and Michael Garland’s light color tones give the issue a bright touch, something I appreciate greatly in a comic.

READ: Interested in what else Captain Marvel does? THE ULTIMATES is worth checking out!

Despite my personal gripe with the ranger scene and the assumed gripes new fans will have with the lack of introduction, THE MIGHTY CAPTAIN MARVEL #1 is a solid first issue. I’m happy that Marvel is continuing to have a woman write this title, as I believe the representation in that department is important, especially with a popular character like Carol. If this series can build upon Alpha Flight and continue to make it a relevant space team, I foresee a lot of potential in its relevancy within the Marvel Universe.