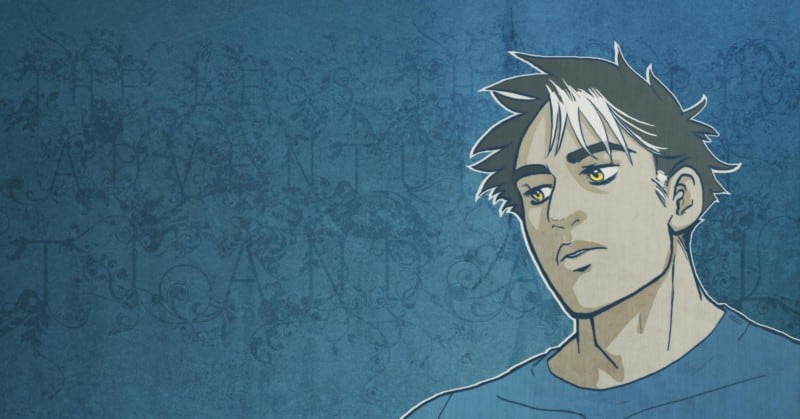 This review contains spoilers for TJ AND AMAL!

Calling off your arranged marriage, coming out to your conservative family, and then deciding to go cross-country in a car with a total stranger: these unusual circumstances form the premise for THE LESS THAN EPIC ADVENTURES OF TJ AND AMAL. In this comic, Amal, a recently outed med student, and TJ, an easy-going drifter, decide to ride from Berkeley to Providence, and along the way set off on one of the strangest and most enlightening journeys of their lives.

Created by E.K. Weaver, TJ AND AMAL ran as a webcomic from 2009 to 2014 before being collected into a graphic novel. The graphic novel won several awards, including the 2015 Lambda Award for Best LGBTQ+ Graphic Novel and the 2016 Harvey Award for Best Graphic Album Previously Published, as well as a nomination for the 2016 Eisner for Best Graphic Album: Reprint. A combination of beautiful drawings, hilarious comedy, and a thought-provoking storyline puts TJ AND AMAL among the best LGBTQIA+ comics out there. Here are three reasons why this comic needs to be read immediately:

READ: To celebrate the release of IDW’s LOVE IS LOVE, we held a roundtable talking about LGBTQIA+ issues in comics.

E.K. Weaver creates dynamic characters with well-developed, multifaceted identities. Amal is a gay Indian-American man from a traditionally conservative family. His coming out process is handled with all the complexity and sympathy it deserves, relaying the concerns and vulnerabilities of a young queer man of color in the Millennial Age. Throughout TJ AND AMAL, even while having amazing adventures on the road, Amal is constantly on guard, often feeling uncomfortable in his own skin. Whether wary of homophobic strangers in a diner or scared of disappointing his own biological family and ethnic community, Amal is often unable to distinguish allies from antagonists. A primary example of this is shown in one of his less guarded moments, Amal explains, “when you grow up like me, you watch out for warning signs.” Amal elsewhere sums up his intersectional identity by calling himself “just a short brown stain in a big white book,” giving voice to the frustrations of exclusion felt by the multiform marginalized.

Though establishing an on-the-road comedic air in TJ AND AMAL, Weaver is not afraid of going into serious issues, such as the underlying economic stresses the two characters face. Before coming out, Amal came from a financially stable background, as his family pays for his medical school. In his post-coming-out process life, Amal sometimes panics but finds relief in the options he has left. He evaluates his financial options for scholarships and work-study programs while still wondering if he can attain his dream without his family’s support. Unfortunately, not everyone has the same luxuries when it comes to financial aid, as often queer people have more limited opportunities when it comes to job opportunities and housing, especially now when more and more legal registration is being written to take away LGBTQ+ rights.

Also, despite his general happy-go-lucky appearance, glimpses into TJ’s darker past sometimes surface. In one instance, when Amal and TJ are discussing their first sexual experiences, TJ insinuates having done sexual favors to obtain food, giving light to the harsh reality of what many homeless, LGBTQIA+ kids do for survival. Furthermore, TJ alludes to a former abusive relationship with a previous partner, who had also gotten TJ involved in a dangerous drug trade. The evidence is portrayed clearly on TJ’s skin, exemplified in the scars on his body, including one on his lower back from getting jacked in a knife fight and another on his shoulder from his former partner.

Weaver’s LGBTQIA+ representation is one of the best I’ve ever seen in webcomics. No two queer persons’ experiences are alike, from Amal’s struggle with his family’s disapproval to TJ’s unapologetic acceptance of his own sexuality. When discussing his family, Amal states that in his conservative household that “things like this” referring to his homosexuality, “just don’t happen… I don’t happen.” In this conversation, TJ admits that he can’t relate to Amal’s situation, “Sorry man, but I just can’t relate. Nobody ever gave two shits who or what I got down with,” implying that he did not have a family like Amal’s to be concerned about him or his sexuality in the first place. Meanwhile, the comic takes a more lighthearted turn when Amal tries to gauge TJ’s orientation, to which TJ amiably responds that he “pings” all, implying that his sexuality leans towards polysexuality/pansexuality, or an attraction to multiple genders.

In addition, the comic is very sex positive, featuring humorous and tender sex scenes between two queer men. Weaver skillfully demonstrates consent in these scenes as Amal and TJ have subtle, fluid discussions when navigating their budding sexual and romantic relationship. Instances of this are seen during foreplay, when Amal, aware of TJ’s history with abuse, checks for TJ’s emotional responses, verbally demonstrating his willingness to stop if his partner is not interested in proceeding. Under no circumstances is sex seen as an obligation in TJ AND AMAL, as the characters portray a mutual appreciation and respect for each other’s bodies. Often, when portraying sexual intercourse in fiction, there’s the sense that sex is automatic, as characters rush into intimate situations without showing concern over personal preferences or boundaries. The conversations that take place between TJ and Amal demonstrates that direct conversations about sex can be both sexy and amusing, infused with laughter and desire, demonstrating a refreshing take on sexuality that should be seen more in fiction and real life.

READ: Want to read more about LGBTQ+ representation in comics? Read our post about it here.

When I first discovered TJ AND AMAL online, I devoured it within a day. The moment I started reading it, I was hooked from the very first page. E.K. Weaver creates an incredible story, focusing on the shared expedition of two very different personalities connecting through the most unlikely, yet tender, of bonds. THE LESS THAN EPIC ADVENTURES OF TJ AND AMAL is definitely worth reading as soon as possible.