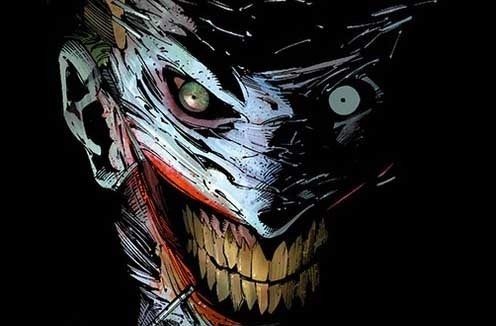 This chapter shows that Batgirl’s relationships with her family are severed, as well. Her brother’s betrayal is a clear demonstration of a lack of emotional regard, or a cold sort of trust. Either way, his actions lead to her capture by Joker. Her mother, a woman with whom Barbara already has a strained relationship, is also captured by Joker, who removes her finger. Clearly Batgirl’s experience of family hasn’t been so positive.

She shares this similarity with Joker, who tells another story of his father, who left him to be feral on the streets. Catwoman, was an orphan, which Joker claims is akin to being a “pawn.” Red Hood, Red Robin, and Nightwing are orphans, too.

The next group of orphans are the two former Robins who might have the most reason to hate each other. With these two, Joker continues a tactic that he’s used throughout the collection. He’s been manipulating characters using their memories. For Catwoman, it was the explosion of a former friend’s apartment. Harley helped Joker capture Batman by recreating the fateful night from THE KILLING JOKE in which Joker was created. THE KILLING JOKE is referenced again in Batgirl’s chapter, when his goons are sent to recreate the scene in which Joker barged in to shoot and paralyze her.

Joker finds objects from Red Hood’s past and plants them in a dark labyrinth for him to find. Red Hood slowly learns that Joker has possibly known his secret identity for years, and may have even been tracking him since before he was Robin. Eventually, Red Hood and Red Robin are joined together. The relationship between the two Batbrothers is tested and nearly severed. The two are manipulated with the image of their dead fathers. To set up these “memory traps” would require tremendous foresight by Joker, tremendous luck, or, more likely, tremendous research. His eventual success marks the capture of the first two Batchildren- Batgirl pops up in this chapter to help the Teen Titans and Outlaws find Red Robin and Red Hood, respectively, and so, she hasn’t been captured yet.

Preparation was never a problem for Joker, however, as he proves in Nightwing’s next chapter, which is particularly dark. He is romantically involved with Sonia, whose father killed his own parents. Thus, we are provided two more characters with broken families. He also is forced to confront his ex, Raya, who has been Jokerized for convenient good vs evil symbolism. Similarly, Joker killed a woman Red Hood was romantically involved with, and separated Red Robin from a girl who loved him. Joker seems intent to make sure that no love exists except that between himself and Batman. A dark surprise for Nightwing sees all the dead members of Haly’s Circus- hundreds of deceased members of his circus-family- set up and posing inside a carnival funhouse in Amusement Mile. Echoing Batgirl’s brother’s betrayal, the dead circus-family becomes active and captures him for Joker.

An interesting note is that Joker sings a parody of “Whistle While You Work” from Disney’s “Snow White and the Seven Dwarves.” Notice the fact that Joker targets seven members of the Batfamily- Catwoman, Batgirl, Red Hood, Red Robin, Nightwing, Robin, and Alfred. Harley wasn’t a target- Joker needed her to act as bait for Batman. Which Bat-family member is which dwarf is up for debate (but I’d like to nominate Alfred for Doc and Red Hood for Grumpy).

By Robin’s chapter, Alfred, Batman, Nightwing, Batgirl, Red Hood, and Red Robin have been captured. That leaves Robin as the sole member of the Bat-family, but he faces a double for his father, a figure he’s been struggling to earn the approval of, in a fight to the death. This could drive Robin, the most instinctually violent sidekick Batman has ever had, over the edge, but he shows remarkable growth since we were first introduced to his character and surrenders. Thus, the whole Bat-family is captured.

In the epic finale of JOKER: DEATH OF THE FAMILY, we get to the heart of the whole conflict. Joker plays the part of a jealous lover. He shouts that he and Batman are the true family, and Batman decides that that family is over. He almost whispers to Joker his name. As great as Joker may be at research and detective work, Batman is even better. Before Joker can hear his name though, he shocks Batman and falls off a cliff. This is when we see that Joker’s black book of his life’s story is completely blank- no killings, no Batfamily notes, nothing. This is keeping in consistency with previous Joker-centered storylines, which often offer new and different backstories and interpretations, making his history what you want it to be.

So, the Joker-Bat family is destroyed, but the Bat-family remains intact. Or does it? Joker seems to have succeeded in getting in between Bruce and the others. They’re all afraid that Joker knew their identities, and that Bruce concealed it from them. The reality is that Joker loved Batman, but had no concern for Batman’s secret identity. Just as he didn’t know his own real world identity, he had no desire to know Batman’s.

The argument isn’t that families are getting symbolically severed left and right in this book. We see memories of dead parents, lovers, and friends. Since Joker comes out and says that he is Batman’s real family, we can take him at his word (or can we?) and assume that he is the family that the title is talking about. The argument then must focus on whether or not this means that Joker is dead at the end of the book.

Of course, this is a comic book, and so, Joker, the most popular Batman villain, will inevitably return in full force. But, if we examine this title as a singular novel and ignore any future inevitabilities, the way you’d analyze a novel, we can make a few inferences that strongly suggest that Joker dies at the end of the book.

Every one of the Bat-family members that Joker captures suggest that he’s going to die tonight. Batgirl promises her mother that one way or another, Joker will never hurt her again. Red Hood says Joker won’t leave his hideout alive. Batman says that Joker will never survive the fall he ends up taking off the cliff. His face also appears to be rotting, unlike in the other chapters. As a stand-alone graphic novel, this would be perfect evidence to demonstrate the death of the Joker/Batman family by having a literal death of the Joker.

It makes sense. It helps explain the references to THE KILLING JOKE, his most accepted origin story. In it, we got the quintessential Joker biography. We even saw the one time Joker made Batman laugh, which is the happiest time of Joker’s life. Essentially, throughout JOKER: DEATH OF THE FAMILY, Joker is seeing his life flash before his eyes. Hence all of the use of memories. We also can’t ignore the obvious parallel to another Joker-centric book, A DEATH IN THE FAMILY, in which a character really did die.

As you can see, there’s a lot more going on to this collection than you’ll get from a couple of readings. Joker’s major goal, the destruction of Batman’s family, is accomplished, but at the cost of his own life. In the Bat-family, however, he planted an isotope of Hahnium, atomic symbol Ha. Thus, everyone has a little piece of the Joker in them, and Joker is finally a part of Batman’s family like he wanted in the first place. Through manipulation of memories, including his own history from THE KILLING JOKE, as well as through the habitual destruction of relationships of all types, Joker succeeded in a way no one could have expected to- in his death, there lies a strange sort of eternal life, where just maybe Joker is being chased by his true love for all time.