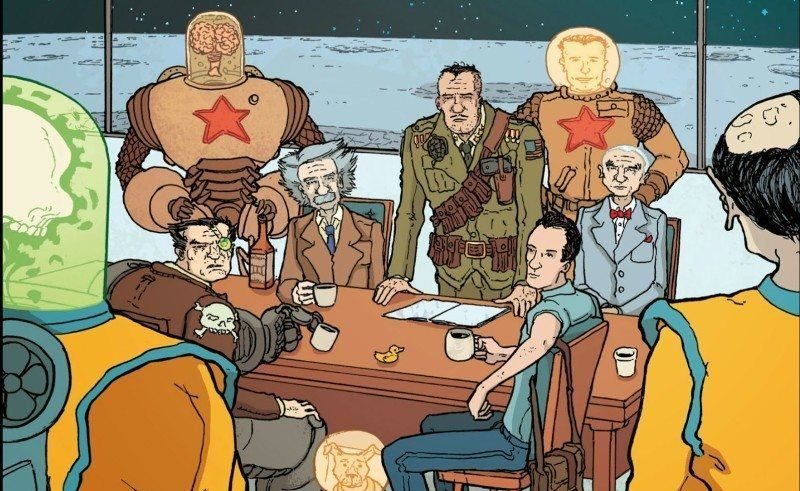 Jonathan Hickman’s and Nick Pitarra’s THE MANHATTAN PROJECTS (2012-2015) depicts national heroes American, German, and Russian alike as violent and self-absorbed madmen. It elevates to superhuman levels the genius attributed to some of them, and deepens to subhuman levels the depravity we naturally suspect prodigious men of flirting with. Whenever we ask the question, “How can Franklin Delano Roosevelt, or Joseph Robert Oppenheimer, or SS Major Wernher Magnus Maximilian, Herr Baron von Braun, PhD., have accomplished so much in a single lifetime?” one of the answers we unconsciously consider is that they were unhinged, power-mad, driven by forces most of us never feel. If they slept less, thought more, worked longer hours, and pushed their ideas through opposition with more commitment than the rest of us, then did their private passions and their consciences also behave differently from those of your everyday mere mortal?

THE MANHATTAN PROJECTS’ cast includes four Presidents of the United States—FDR, Harry S. Truman, JFK, and LBJ—two US Army generals—Leslie Groves and William Westmoreland—four famous scientists from one-time facist European states—Albert Einstein, Enrico Fermi, Wernher von Braun, and Helmutt Gröttrup—three famous American physicists—J. Robert Oppenheimer, Richard Feynman, and Harry Daghlian—one Defense Minister of the USSR and one of its eventual Premiers—Dmitriy Ustinov and Leonid Brezhnev—and two of the earliest cosmonauts—Yuri Gagarin and Laika, a dog. But it is not history. It is an alternate history. And in this alternate history, only a few of these figures are depicted with a personality deserving of the secular beatification all of them have received. 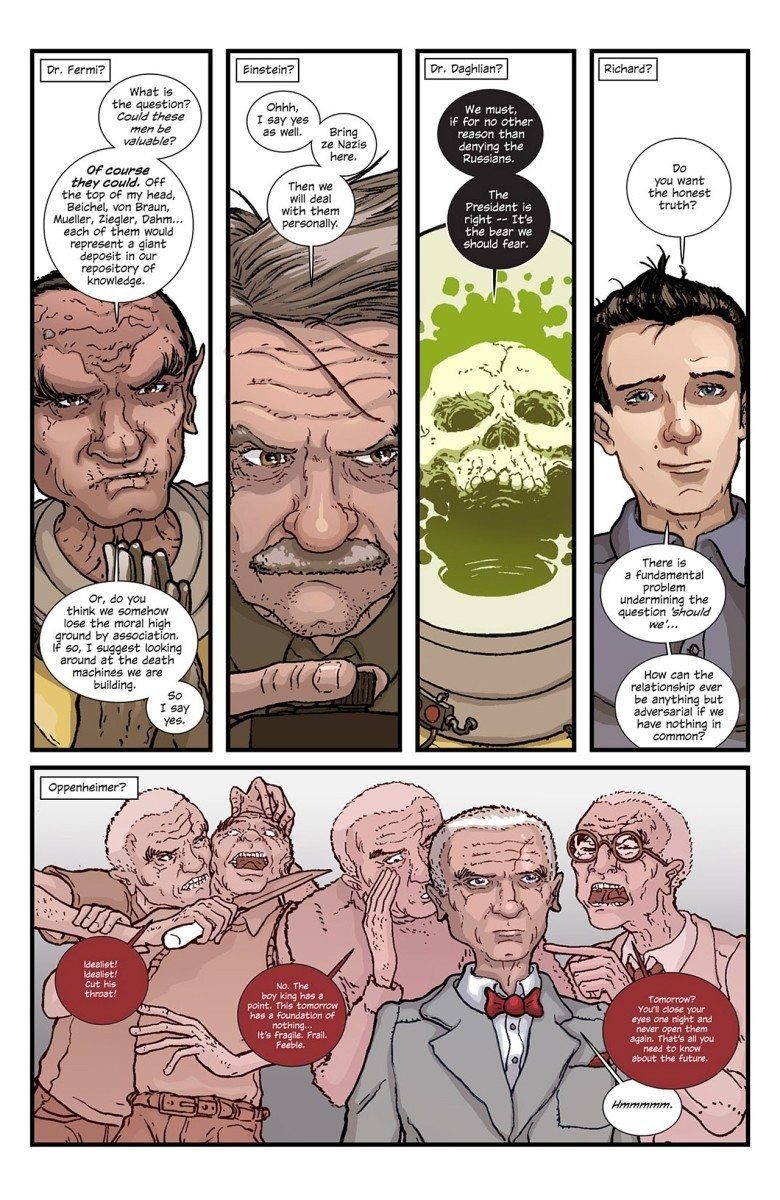 In this alternate history, Oppenheimer is a man who can consume minds by eating bodies, Einstein has an evil twin from an alternate dimension posing as him, von Braun is a cyborg, JFK spends all of his time coked up with sex workers in the Oval Office, and Westmoreland wears a necklace of human ears. This alternate history opens with a squad of samurai robots being sent through a Shinto portal-gate maintained psionically by meditating death buddhists to attack the gathered minds behind the Manhattan Project—who promptly destroy the robots, capture the death buddhists, and enslave them for use in maintaining the portals they want maintained.

READ: If you like Sci-Fi, you’ll love SAGA!  Here’s our review of the latest issue! 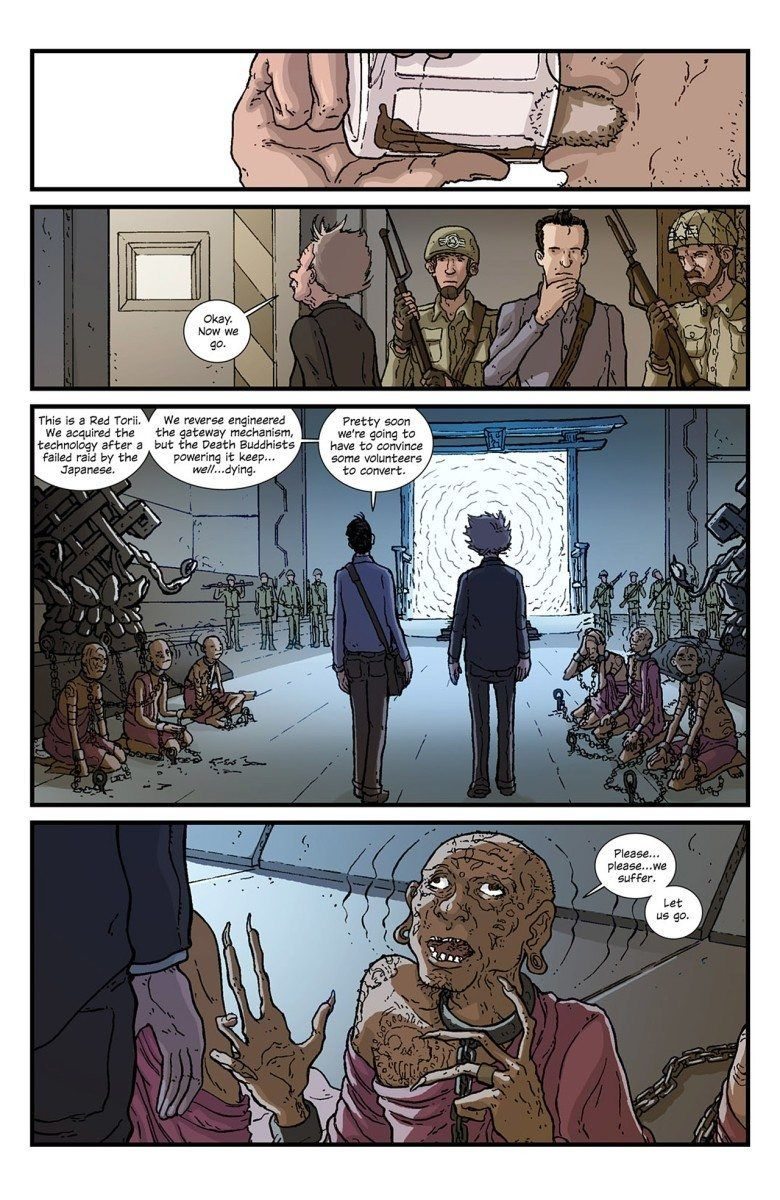 On top of being all this, THE MANHATTAN PROJECTS is not alternate history in the most conventional of senses. Yes, it deals with an account of historical events alternate to that of historians’ most educated guesses. But no, it does not diverge its timeline from our own at a point early in the narrative. THE MANHATTAN PROJECTS’ plot continues to line up with real history right up to issue 25, the final issue of the first title, but it does so from a non-euclidian angle. The events are there, but their backdrop is twisted, rearranged. Truman takes over from FDR publically as we remember the events, but he is informed of the President’s death in the middle of a Masonic ceremony over which he is presiding, Roosevelt himself has his consciousness uploaded to a computer mainframe before his body is medically dead, and Gen. Leslie Groves of the Manhattan Project drops the Little Boy onto Hiroshima over the objections of the former Vice President. Yes, the Cold War does occur, but it’s all a front to increase defense spending, as both the US and the USSR are at that time being run by shadow governments: the Manhattan Projects themselves in North America, and its cooperative equivalent, Star City, in Russia. 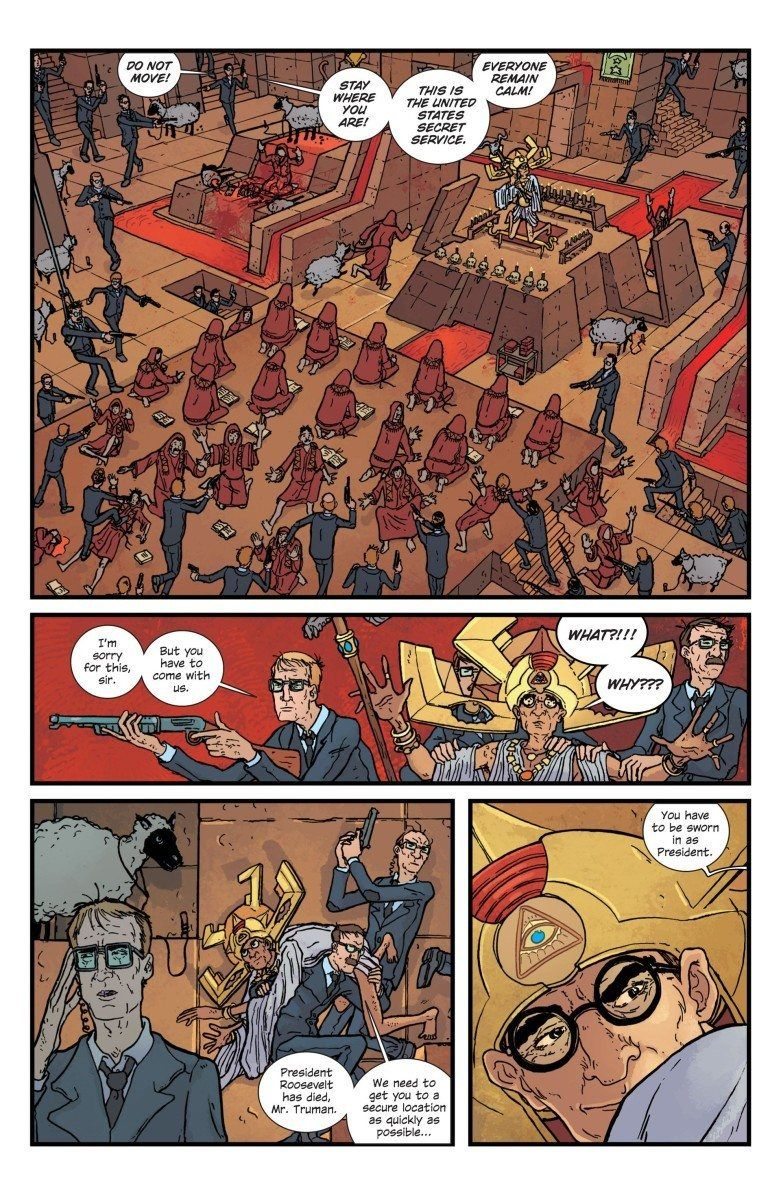 To what end do the Manhattan Projects and Star City secretly control the world’s economy and its scientific developments? They play a space operatic Great Game, a competition not between the Russian and British empires over Central Asia, but between humanity the underdog and the galaxy’s many established empires. After J. Robert Oppenheimer murders and eats the scientist in charge of a Siill exploration vehicle, the Manhattan Projects’ greatest minds conceive a kind of Pearl Harbor attack on the Court of Siill Emperor. After it, humanity no longer enjoys the element of surprise in the galaxy, and so not only civilian but even military control of the government are both sacrificed in the name of planetary defense: the frenemy shadow governments work wonders with stolen alien technology and knowledge in a short span of years, building vast geothermal generators beneath the Earth’s crust and positioning a jumping-off point on its moon. 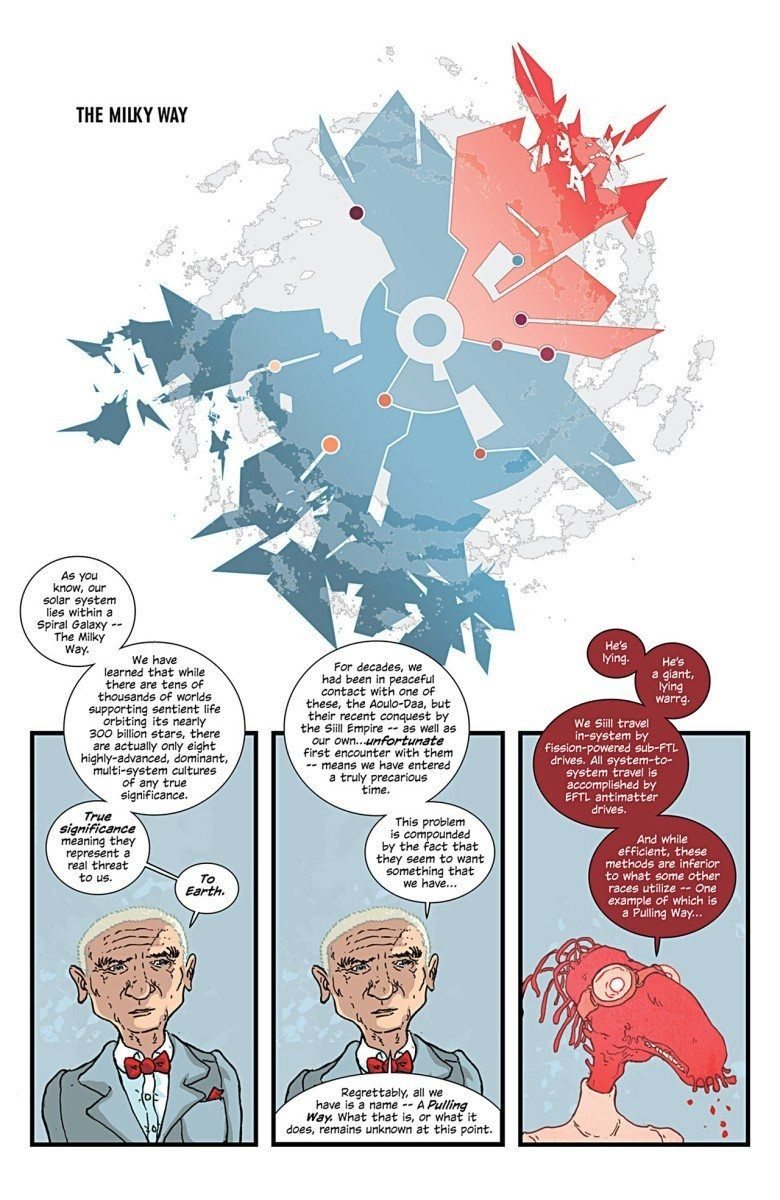 Since the early stage in the life of the comic at which this graphic was drawn up, D’rhi civilization, the Sionnu Science Union, and Raal have all been fleshed out to one extent or another. In fact, THE MANHATTAN PROJECTS’ followup title THE SUN BEYOND THE STARS, a quarterly that started in March 2015, concentrates primarily on the story’s continuing events in deep space, surrounding Yuri Gagarin and the dog Laika.

Aside from being great pulp sci-fi, what makes this a good comic? Why create a comic in which half or more of the midcentury US secular hagiography is depicted as utterly amoral and power-mad? Like The Venture Bros. before it, THE MANHATTAN PROJECTS subverts some of the very bases of our late 20th century late capitalist society. It questions the legitimacy of the Cold War and condemns the Mutually-Assured Destruction principle of nuclear deterrence—but conservatives and leftists alike have been doing that since before The Hunt for Red October was written and adapted, before Star Trek or even A Canticle for Liebowitz. It casts a judgmental eye on well-loved heroes like Kennedy and Feynman—but these men’s womanizing has been widely known for decades, without having much effect on their reputations. It makes of monsters like Westmoreland and von Braun even more monstrous men—but what could the point of such an effort even be? 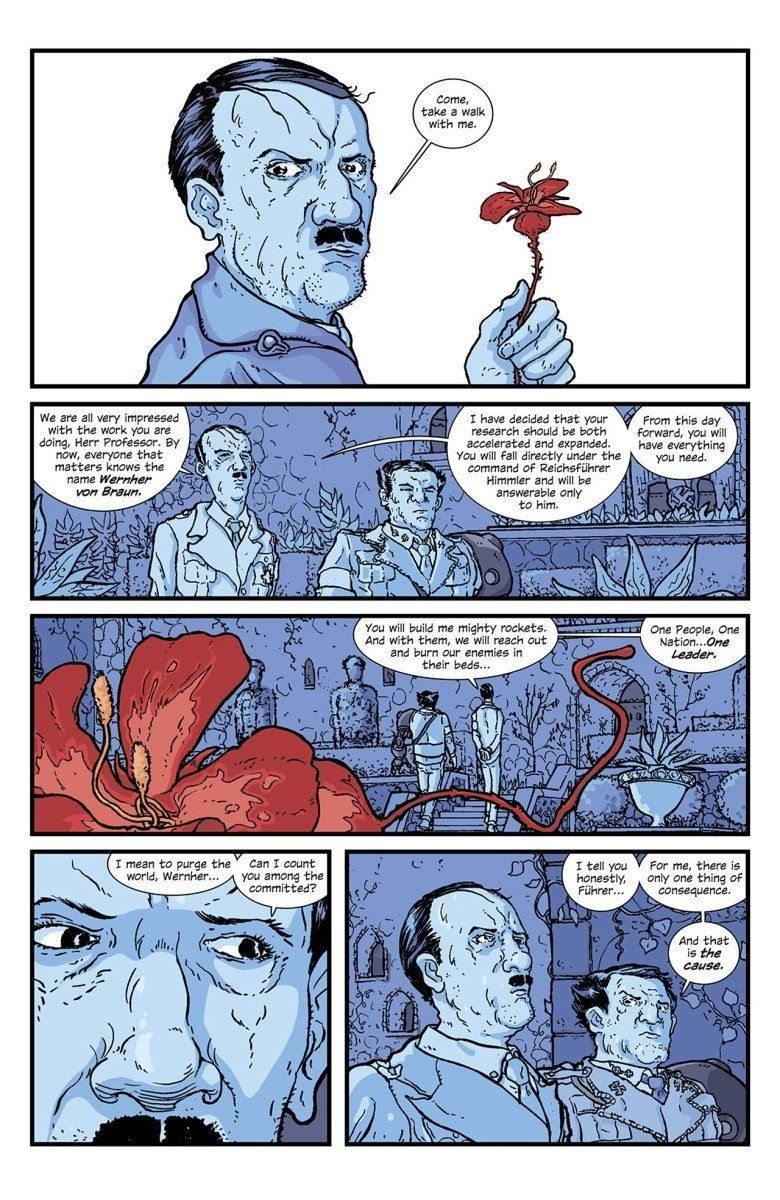 At a deeper level than any of these, THE MANHATTAN PROJECTS criticizes the nature of power and renown in our society. It does not praise famous men. Instead, it goes as far in the opposite direction as its creators can possibly bring themselves. The kind of irreverence that THE MANHATTAN PROJECTS practices takes more than a healthy disrespect for authority; it requires of its creators a solid familiarity with 20th century global history and politics, a close reader’s eye for authentic phrasing in the recreation of midcentury propaganda statements and rationales for war, a finger on the pulse of American counter-cultural fiction of both the historical and alternate-historical varieties. The allegory alone that Hickman and Pitarra draw between the US’ role in galactic Great Game politics and Japan’s role in turn-of-the-twentieth century Pacific power struggles is brilliant enough to speak for the sharpness with which they adapt other real historical events into those of their fantastic alternate history. We US readers, when we read of the Manhattan Projects’ mass-murderous surprise attack on the Siill Imperial Court, are being confronted both with an aggrandized version of our former enemy Japan’s compelling reason to have taken us by surprise at Pearl Harbor, and with the abject horror of our atomic bombing in miniature. 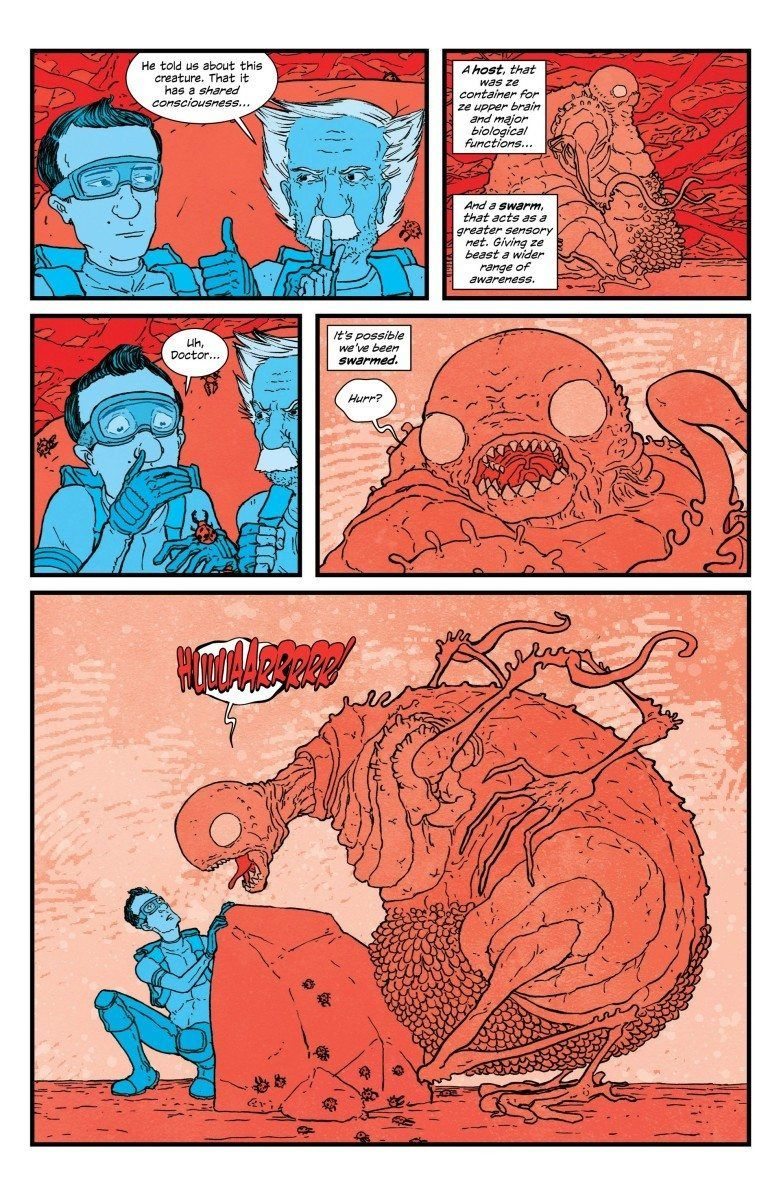 In addition to being irreverent and keenly aware, THE MANHATTAN PROJECTS is also just plain weird. Its creators never fail to make the most of a dimension hop, nor do they shirk the responsibility to populate their multiverse with some truly strange forms of life. When Feynman and Einstein are tasked by Oppenheimer with synthesizing the most deadly capabilities of several alien lifeforms, the two adventuring scientists come across the stuff of nightmares. Whole swathes of the book’s plot take place inside Oppenheimer’s mind, in the form of scenes played out by the individual minds of the many he has eaten and absorbed.

In sum, THE MANHATTAN PROJECTS is the revision to super-science titles like THE FANTASTIC FOUR (1961-2015) that WATCHMEN (1988) was to beat-em-up’s like POWER MAN & IRON FIST (1972-1986), that The Venture Bros. is to Johnny Quest. It’s no coincidence, with Hickman having previously worked on THE FANTASTIC FOUR from 2009-2013. Its deep entanglement with real history, though, gives it a significance outside the realm of comics. As alternate history and as satire, THE MANHATTAN PROJECTS succeeds as well. It brings to our attention the absurdity of our own post-Cold War global culture’s way of remembering its war-torn past. It remains to be seen whether the followup title SUN BEYOND THE STARS (2015- )will continue this project or take the comic to strange new worlds where no state scientist or cosmonaut has gone before. 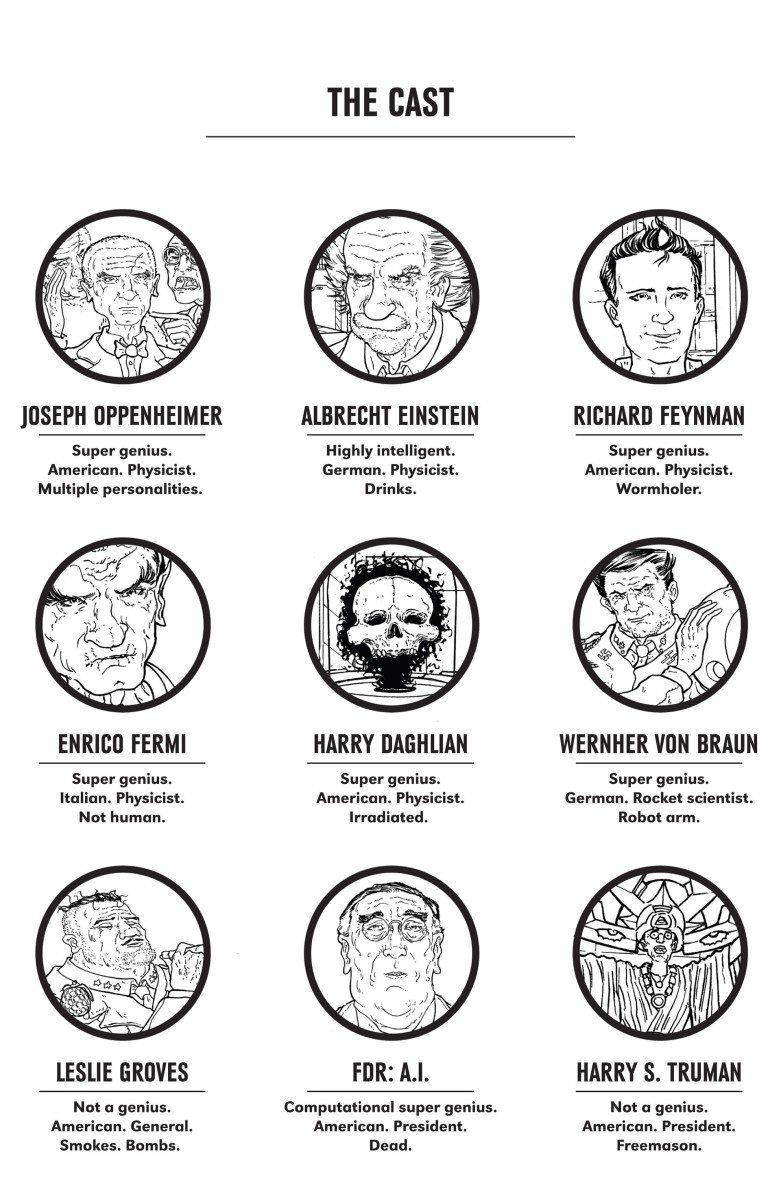