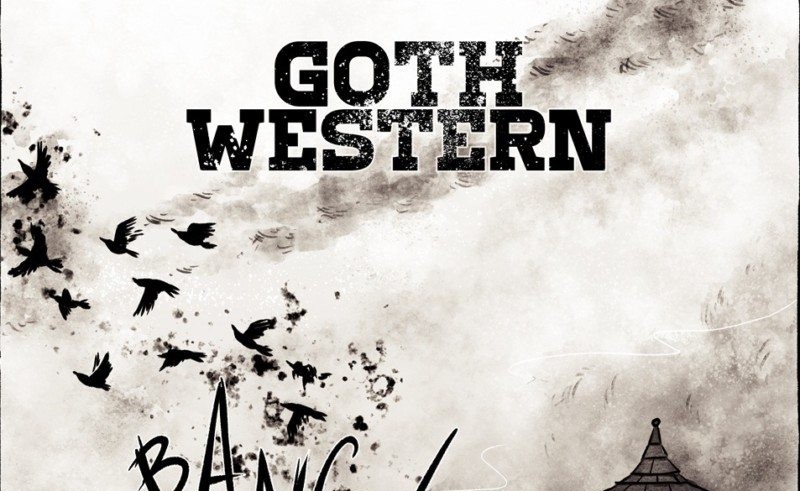 Denizens of the ComicsVerse! Welcome to this week’s installment of THE INDIE SPOTLIGHT, a series in which we interview indie comic creators in regards to their current projects. For some, we’ll be discussing what is one in a long line of creative projects. For others, we’ll be talking about their first big project! Similar to how children are our future, the writers and artists behind the indie comics of today are the industry giants of tomorrow! THE INDIE SPOTLIGHT gives you information about new comics directly from their creators as they attempt to make a name for themselves in the industry. You never know who might be the next big thing!

This week, I talked to Livali Wyle, creator of the webcomic, GOTH WESTERN. Beginning in November 2015, GOTH WESTERN is a webcomic updated weekly which features magic, gunfights, flowers, and blood.

CV: Thank you so much for agreeing to the interview.

LW: Thank you for asking! I’m excited when anyone likes my work enough to talk to me about it!

CV: First of all, could you give us an overview of what GOTH WESTERN is about?

LW: GOTH WESTERN is about a mysterious lady gunslinger who sells her soul to bring her true love back to life, and the adventures the two of them have afterwards while trying to fulfill their deal with the God of Doomed Lovers.

CV: How much research goes into preparing a story set in an earlier time period?

LW: My research for the comic is sort of fitful and intermittent. I’ve got a pretty good base of background knowledge for the general landscape that I’ve culled from watching a bunch of westerns, and I’ve done some reading about various parts of life in that time period, but for a lot of the story I’m sort of going by feel. What I do get real hung up on is little details. Like, for a scene that lasts all of one page, I spent probably three hours trying to figure out what kind of meal one might cook over a campfire with just supplies you brought with you in the early 1870s (I settled on flatbread.) I also do a whole lot of visual research for how towns were laid out, clothing styles, et cetera. 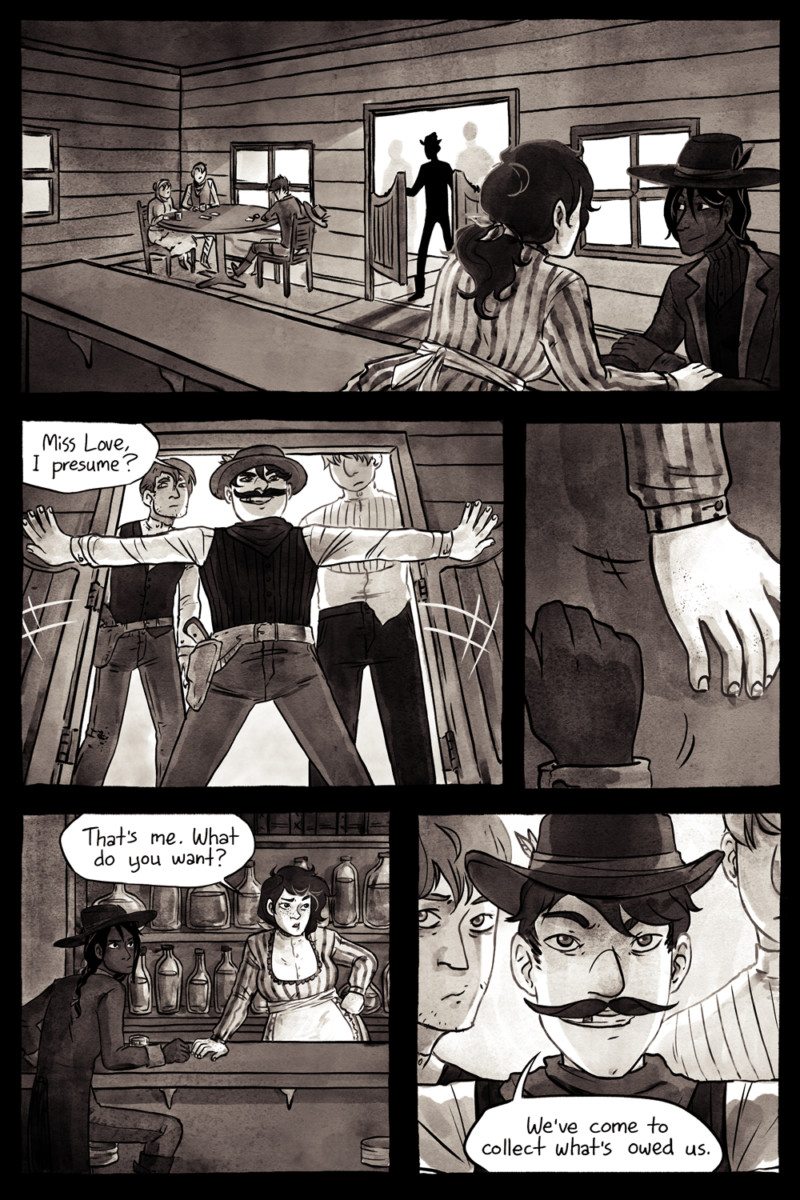 CV: Was it always the intention of GOTH WESTERN to be a webcomic?

LW: Basically! I think I briefly considered making it a minicomic, but the story got too big for that pretty quickly. I’d wanted to do a webcomic for ages, and this story seemed like a good fit for that.

CV: Where did inspiration for GOTH WESTERN come from?

LW: That can be sort of tough to track, as my brain is a vast nebula of story parts that occasionally clump together into something coherent. There all these are bits and pieces of old orphaned story ideas and concepts I keep coming back to (benevolent necromancy, for one) that make up this story. I think the main driving force though is that it’s the sort of comic that I’d love to read but can’t seem to find. I want a western with dark fantasy elements! I want an unapologetically lesbian action hero! I want a sweet, domestic romance amidst a background of chaos and gunfire. It’s very self-indulgent and I have a ton of fun making it and I’m so glad other people seem to have as much fun reading it.

CV: What are the benefits and challenges of creating a webcomic?

LW: THERE ARE SO MANY OF BOTH. I love getting my work out into the world and seeing how other people react to it, and it’s so incredibly fulfilling to look at the archive and see all of those pages and think, “I made that.” It’s great having an incentive to draw every day, and I can see the improvement from the first page to now, some nine or ten months later. Sometimes people draw me fan art and I totally lose my mind and set it as my phone background for six months.

BUT, it’s a huge commitment. I work full time, so getting a comic done every week can make it pretty hard to have a social life or hobbies other than drawing. Most of the decisions I make on a daily basis factor in whether this week’s comic is done yet. Add in unexpected complications such as one’s primary drawing computer vanishing for a month, or flying cross-country to see family, and things can get pretty chaotic.

It’s so worth it. 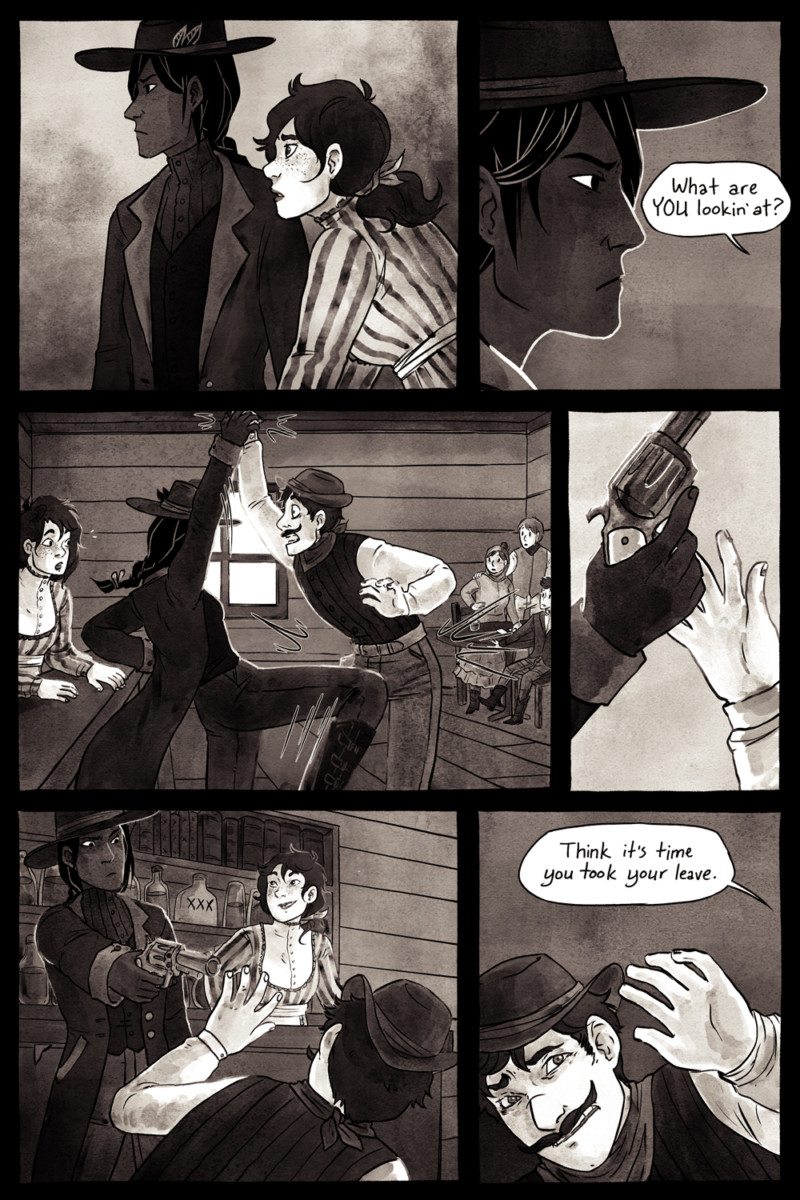 CV: Does GOTH WESTERN have a finite story or is there a potential for it to be ongoing?

LW: I have a specific end point in mind, though I haven’t ruled out further “episodes” after the current story arc is over.

CV: Have you any plans to go into print media?

LW: I long deeply to someday hold a printed GOTH WESTERN book in my hands. It depends mostly on demand, but I’ll definitely be printing books of the full story arc once it’s complete.

CV: Where did your love for the comics medium come from?

LW: When I was in fifth grade, I wanted to be Jhonen Vasquez. Before that, I mostly read newspaper comics. I’m really not sure how I got from there to here.

But really, what I love about comics is that you take pictures and you take text and you combine them into something that neither could be on its own. And there’s so much you can do with that! It’s a little like a movie you can make all by yourself. You’re missing some tools like sound and motion, but you’ve gained some as well, like visual sound effects, creative use of panel transitions, the panel layout itself, drawing style and coloring style and black placement. Comics! It’s such a wonderful and versatile medium and I love it.

READ: Fan of Jhonen Vasquez? Check out our review of INVADER ZIM VOL 1!

CV: Would you define yourself as a writer, artist, creator, or something else entirely?

LW: I usually tell people I’m an artist. It’s the one thing I know I can do. I’m actually pretty shy about my writing. When I tell people about the comic, I usually say I “do” a webcomic, which is an interesting word choice when I think about it.

CV: Your artistic style is gorgeous. How did you develop it?

LW: Thank you! It’s hard to trace the development of my style because it’s not something I consciously think about. It’s just what comes out when I decide to draw something. I’m sure a lot of things have subconsciously shaped the way I draw though. If I had to pick a few: Takeshi Obata, Sophie Campbell, the active pressure to stop drawing anime that many folks my age felt in their late teens, and that time one of my professors heavily implied that I couldn’t draw backgrounds.

CV: Outside of GOTH WESTERN you have a website named bonyfish.net. It appears that you are drawn to drawing fantasy and the supernatural. What appeals to you about these genres?

LW: Gosh, I just love drawing weird stuff. I’ve always loved surrealism but I’m also drawn to those, like, fairy bookmarks you can buy in little booklets at corner book stores (can you still buy those? Was that a mid-nineties thing?). I like the mix of weird and mundane. Think of René Magritte but also those early Christian icon paintings with the weird stiff poses. I also like drawing flowers because I find them unsettling. 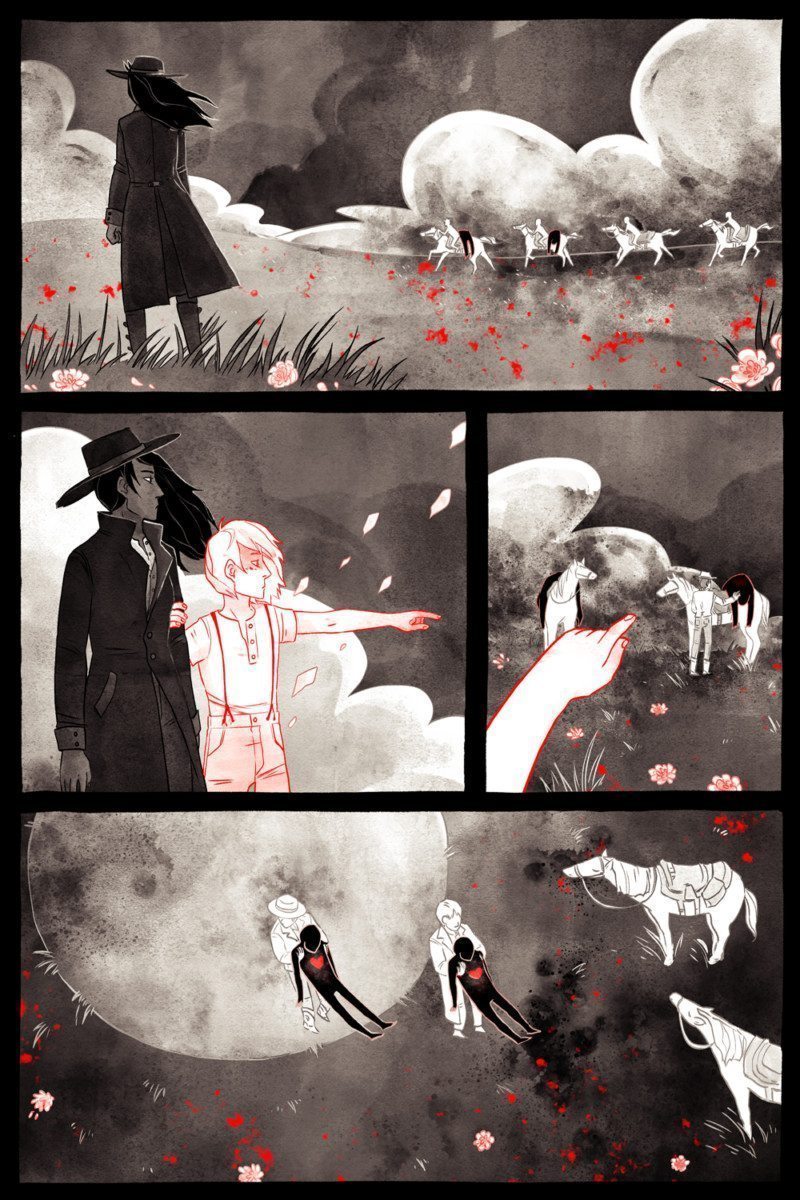 CV: If you had any advice for any other comics creators, what would it be?

LW: First, TAKE CARE OF YOURSELF! I am not always good at this, but know your limits, take breaks, stay hydrated, and stretch a lot. You’ll be able to do much better work if you’re not destroying yourself. Trust me: I had to get wrist surgery in my junior year of art school.

Second, if you’re doing a webcomic, try to have a big buffer before you start! I used mine up pretty fast and have regretted it basically ever since.

Third, it’s okay to start telling your story when you’re a little foggy on the middle details and work things out as you go, but make sure you know how it’s going to end. You need something to build towards.

READ: Check out our interview with Sophie Campbell at FlameCon ’16!

CV: What is the best way of supporting independent creators like yourself?

LW: I’m very fond of Patreon! It’s been a great help to me, and I know it’s worked well for some of my friends too. Some folks do commissions. I have an online shop, bonyfish.redbubble.com, where I sell various wares with my art on them. Also, turn off AdBlock if you’re reading through a webcomic. Lots of webcomics run on ad revenue!