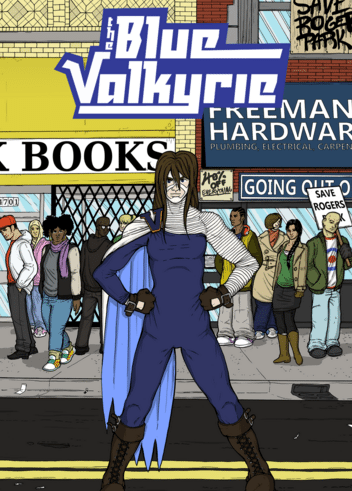 Denizens of the ComicsVerse! Welcome to the second installment of THE INDIE SPOTLIGHT, a series in which we interview indie comic creators in regards to their current projects. For some, we’ll be discussing what is one in a long line of creative projects. For others, we’ll be talking about their first big project! Similar to how children are our future, the writers and artists behind the indie comics of today are the industry giants of tomorrow! THE INDIE SPOTLIGHT gives you information about new comics directly from their creators as they attempt to make a name for themselves in the industry. You never know who might be the next big thing!

This week, I caught up with Emily Reisbeck, the writer of THE BLUE VALKYRIE, a superhero comic centered around a group of queer and trans women and their struggle against corrupt bureaucracy, big business, and the police. The comic’s protagonist is Chloe, a waitress who discovers her superpowers after reconnecting with an old acquaintance goes awry. In addition to handling her own love life, and the world as it reacts to her transition, Chloe also serves as a vigilante guardian of Cream City known as the Blue Valkyrie! Reisbeck studied journalism at Marquette University before focusing her efforts on writing comic, and is currently based in northern Illinois. Outside of the realm of comics, Reisbeck is the head author of a 2D pixel-art action game called “Kin”, which is currently in development, and she’s very excited about it!

READ: For more trans women in comics, check out our review of KIM & KIM #1 !

CV: Can you give our readers an overview of THE BLUE VALKYRIE?

ER: The Blue Valkyrie is a superhero comic published weekly on tumblr and tapastic, written by me and drawn by David Mitchell. It follows Chloe Ritter, a young queer and trans woman, and her girlfriend Alice Gates. When Chloe is the victim of an assault, she finds that she has superhuman strength, speed and a slew of other abilities. She puts these abilities to use as The Blue Valkyrie, Cream City’s one and only masked superhero. Along the way, she gets help form Alice, as wellas their friend Isabella Morales, a community activist fighting against a ruthless businessman looking to redevelop her community. 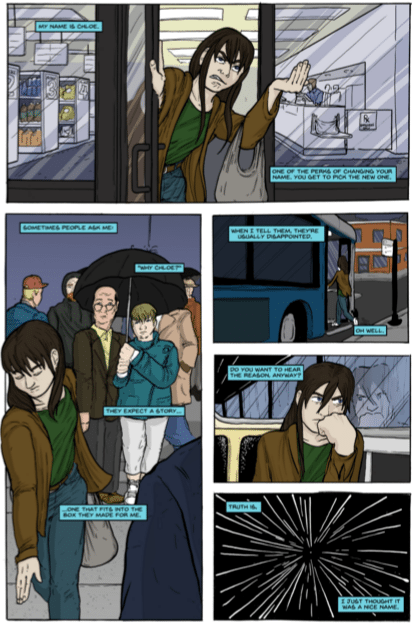 CV: What are your influences as a creator, either in the realm of comics or otherwise?

ER: In comics, I take a lot of inspiration from Gail Simone. Her work with superheroes definitely gave me a lot of the language through which I understand the genre. Other comic writers I feel influence me are Annie Mok and, more recently, J Bearhat. But a lot of my influences as a writer come from novelists, as that was where I spent most of my time before I started writing comics myself. The biggest influence on my writing is definitely Kurt Vonnegut. I fell in love with his writing in high school and have loved it ever since.

CV: Activism is a recurring theme in THE BLUE VALKYRIE, what are your thoughts on comics as an engine for social change?

ER: Comics definitely have a history of being used for social change, for better or worse. Off the top of my head, I imagine political cartoons, radical zines, chick tracts. As a medium, sequential art is often very easy, and even fun to read, making the purpose and intent more readily digestible (if, of course, that is the intent). With that being said, I didn’t start THE BLUE VALKYRIE with the intent of making it an “activist” book. I just really enjoy superheroes and wanted to see someone who was like me as a superhero. But as I started writing, and my motives and plans stated shifting, I found that Isabella’s activism and other topics like it became more prevalent. I felt that was the best place to take the story. 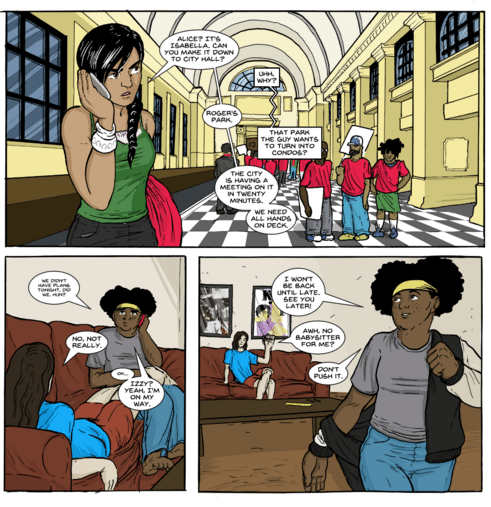 CV: Gentrification is a pretty large part of THE BLUE VALKYRIE. Does this draw on the goings on in any city in particular?

ER: Cream City is actually a nickname for Milwaukee, and as far as places I’ve lived, I’ve split my time between Milwaukee and Chicago. As a white woman, I obviously am not a direct victim of gentrification, but the histories of these cities definitely informed me and my writing. Also, for a time I was a journalist reporting on construction and development, and so I was able to have a slightly closer (if more technical look) on what it takes to build a building. That’s what led my decision to have Pryce be, among other things, interested in real estate development.

CV: What did you set out to accomplish with THE BLUE VALKYRIE?

ER: As cliché as it sounds, when I first began writing THE BLUE VALKYRIE, my goal was to create comics where I could see someone who looked like me as a hero. Trans women have some minor roles in modern superhero comics, but they’re largely as supporting cast, like Batgirl’s Alysia, if they don’t end up murdered for plot reasons. But as I kept writing THE BLUE VALKYRIE, my motives began to change and my scope began to widen. I feel that THE BLUE VALKYRIE is becoming and is going to continue to become much more of an ensemble cast, with a broader scope. I’m interested in exploring the idea of the superhero as it relates to a modern society. I’m not the first and I certainly won’t be the last to do this, but I hope that my unique perspective will add something to the conversation.

CV: How did you settle on the artist for THE BLUE VALKYRIE, David John Mitchell?

ER: I met David online, and it was really pure chance that we worked well together. Originally, I was making it with a friend of mine, who didn’t have a lot of time to commit. When I was starting to get more serious, and he couldn’t commit to THE BLUE VALKYRIE more fully, I went to an online community I was a part of and talked about the project. David happened to belong to the same community, and happened to be looking for a project that he wasn’t also the writer on, and it all just fell into place. I’m supremely lucky to have come across him, and it’s even more lucky that we work so well together.

CV: What is Mitchell’s role in the worldbuilding process of THE BLUE VALKYRIE?

ER: David does a huge amount of behind-the-scenes worldbuilding for THE BLUE VALKYRIE. I talked about this in blogs a lot while we were still developing the first issue, but we wanted to do a lot of micronarratives within the text, especially early on, to give us a little extra space to explore who these characters are nad how they think, feel, and act. The largest amount of worldbuilding comes from David’s backgrounds. David travels around on foot to local neighborhoods and uses the architecture as inspiration for Cream City, giving it (in my opinion) a more authentic and realistic feel.

CV: How will the superhero side of THE BLUE VALKYRIE be developed further as the story progresses?

ER: I like to think of THE BLUE VALKYRIE as a slow burn. The superhero stuff has so far been pretty muted, taking a back seat to character-driven drama. I like that, but I also really like superhero stuff. So, without spoiling anything for anyone the superhero fun will take more of a role in the story as it continues to develop. I’m sure that will disappoint some people, and I want to assure everyone that characters are always going to important to me, and I intend to put characters before superhero action if the plot serves it. But as the story moves forward, there will be more superheroes, and more action, and more kapow kablam kazam. I’m actually really excited, as I have a lot of fun ideas for superheroes that I’m just dying to try. 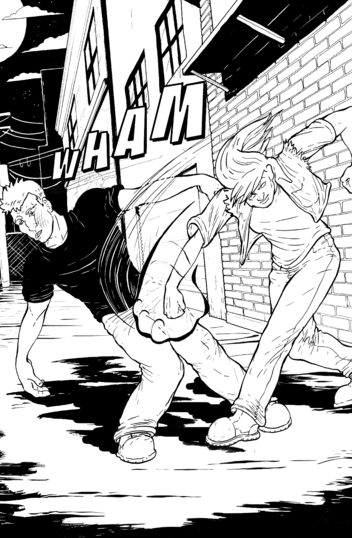 CV: Why is THE BLUE VALKYRIE important to you?

ER: I wasn’t always a social butterfly, and in a lot of ways I’m still not. I hate crowds, I can be a bit awkward, and I don’t like putting myself out there because I’m a very self-conscious person. But I’ve loved writing for most of my life and I’ve always wanted to publish something. THE BLUE VALKYRIE is, right now, the only something there is for me, and so it’s a big deal to me. It took a lot of doing for me to put myself out there, and I’m very happy that people seem to enjoy it. For me, it was a first step to being comfortable with myself and my writing.

Chloe’s body (but not her face) was actually modeled after my own, and that too was very important for me being comfortable with my own body.

As far as Chloe being trans, I certainly hope that THE BLUE VALKYRIE will be “inspiring” to other queer trans women. But since starting, I have moved away from that being a primary goal. Rather than Chloe being inspiring, I’d rather she be human. It’s nice to be inspired, but I now feel that instead I’d rather see someone who feels the way I feel.

THE BLUE VALKYRIE can be read here.

If you like the comic, you can support THE BLUE VALKYRIE by donating to Reisbeck’s patreon.