It’s a wild and savage ride through the badlands in Jason Aaron’s THE GODDAMNED #1-5. It’s racy, crude aesthetic might not be for everyone, but it’s more than worth a read for those interested. Set in biblical times, specifically the Old Testament, we’re treated to a dying world that’s overrun by cannibals, heathens, and rapists. The landscape has been worn of its resources and it’s a fight for everyone’s survival, everyone except for our protagonist Cain. Yes, Cain, son of Adam and Eve and the inventor of murder, as the comic puts it. Cursed by God with immortality, Cain wanders the land in search of a way to die so that he may end his eternal suffering. Along the way, he interacts with survivors and bandits alike, content to remain as non-social as possible. However, it seems that everyone knows his name and in some way he gets dragged into the conflict. 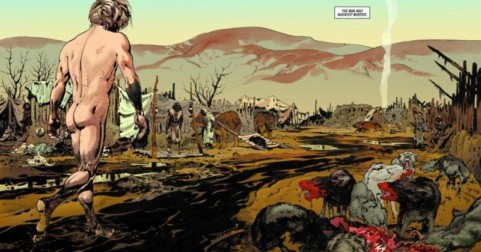 If this premise seems familiar to you it may be because it’s very similar to Mad Max. Both stories feature a lone warrior roaming a wasteland while being dragged into conflicts he’d rather abstain from. This similarity isn’t a bad thing. In fact, it’s a great thing. I’d say Mad Max is one the best post-apocalyptic stories because it puts less focus on the protagonist and more on the interactions with the setting. Each movie allows certain elements to shine while building on aesthetic traits of the world and its inhabitants. I’d say MAD MAX: FURY ROAD more than exemplifies my point.

READ: Here’s our review of THE GODDAMNED #1 to get acquainted!

THE GODDAMNED #1-5 mirrors these traits with its characters and horrific landscape within its first arc, ending in issue #5. We’re shown the depravity of man, background information on Cain, and some involvement from other biblical characters. While the depravity of man is prevalent, the interest in Cain as a character is not. His personality can be succinctly summed up as apathetic, and his immortality, while initially intriguing, removes tension from most conflicts. It becomes more apparent that his purpose is to be the perspective from which we view the world, and that’s perfectly fine.

Within THE GODDAMNED #1-5 is a vast set of characters, the most intriguing of which are Aaron’s interpretations of biblical figures. Noah, for example, isn’t a wholesome follower of God, but instead a totalitarian. He forcefully collects animals, slaves, and resources and justifies it as God’s orders. Seeing him as a villain is not only unexpected but refreshing. In some ways, it’s humorous seeing Noah critique the savagery of bandits right before culling them with an ax, but in other ways, it’s disturbingly humanizing. Seeing Noah outside the context of a follower of God presents him as a fanatic narcissist. Whether or not Aaron’s interpretation is intended to be social commentary can be argued, but here’s hoping that this trend continues with other biblical figures.

Noah is also a representation of Cain’s rejection by God and the world. In a conversation between the two, Noah blames Cain for the state of the everything and says that he’d be better off dead. Cain retorts that he’d be more than happy to die, but being immortal presents a contradiction of interest between Noah and God. It later becomes apparent that Cain’s desire for death derives from a longing to be wanted. The reason Cain hates God is because immortality prevents him from having a family or peace. Moments like this are where the comic truly shines. When other characters are put in the spotlight, they not only add intriguing storylines, but also help flesh out Cain’s character.

READ: Take a look at our DOCTOR STRANGE #4 if you’re a fan of Jason Aaron!

Aesthetically, the artistic talents of G.M. Guéra and Giulia Brusco are capable of polishing grime and muck. Every tooth, nail, and speck of blood or sweat is a jewel that helps the whole treasure shine. From page to page, the swath of the landscape is impeccable and truly helps immerse the reader into the story. It’s almost sad how contradictory the glorious art is to some of the simplistic dialogue. From time to time, Aaron’s characters will speak in broken sentences or spew off one of three obscenities. While it’s understood that it’s to portray the symptom of wanton violence and destruction, it still messes with the immersion. Tertiary and unnamed characters sound similar to one another and thus they become generic. It becomes difficult to feel sympathy or empathy for them or even denote a difference. On the bright side, it’s still early in the series and there are great secondary and antagonistic characters to pick up the slack.

Overall, the comic is a fun ride that gives one a similar adrenaline rush as Mad Max, with sick twisted humor depicting biblical times. If you love Mad Max, Jason Aaron’s writing, G.M. Guéra and Giulia Brusco’s art, and have an aversion to Sunday school, pick up a copy of THE GODDAMNED #1-5.