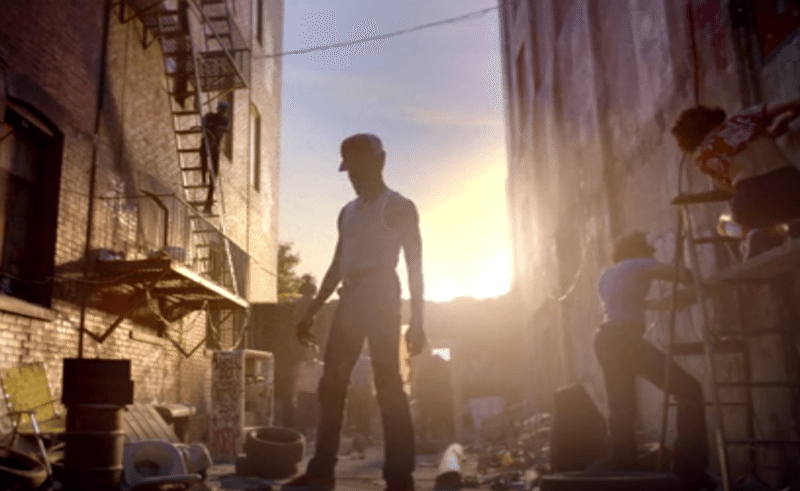 In the pilot for THE GET DOWN, one of the show’s central characters, Shaolin Fantastic (Shameik Moore), is initially spoken of as a legend. A ghost who rides on the winds of the Bronx. One part Bruce Lee, one part Batman, one hundred percent cool. When the central four adolescent leads of the series finally meet this folk hero, they realize he is just guy, and over the course of the show they become his equals. Shaolin’s change from myth to reality represents the duality of hip-hop artists. They create larger than life personas, but speak about the reality of their existence through their music.

It’s this seeming contradiction of fiction and nonfiction that drives the new Netflix series THE GET DOWN, just as it drives hip-hop itself. The show’s primary creator, Baz Luhrmann, director of films like ROMEO + JULIET, MOULIN ROUGE, and THE GREAT GATSBY, is certainly no stranger to artistic bombast through visuals and music. His trademark theatrical style is kept in balance, no doubt, by the creative input of the hip-hop icon Nas. These two creative titans also reflect the alchemical mix that makes hip-hop what it is: authenticity and mythology. The show is representative of hip-hop in this blend of the truth and the fiction. This merger of opposites also fuels the artistic conflicts facing our main characters Zeke Figuero (Justice Smith) and Mylene Cruz (Herizen F. Guardiola) as they enter the world of music and take journeys that represent the cultural journey of their genres of music.

CLICK: Marvel Netflix and Chill with our breakdown of DAREDEVIL season 2

THE GET DOWN takes place in the South Bronx of late 1970’s New York. Disco is still the reining genre of popular music in New York’s hotspot nightclubs, but hip-hop is slowly starting to gain popularity among the people. An important aspect of hip-hop’s popularity is its musical populism. It didn’t arrive to the people after being filtered through studios and record executives; it came from regular people. It wasn’t played in clubs with cover charges, it came from the back to school parties thrown by DJ Kool Herc at 1520 Sedgwick Avenue. As Ed Piskor describes it in his great graphic novel series HIP-HOP FAMILY TREE: “Being the only game in town, these parties command huge crowds and provide a wealth of inspiration to the young people in attendance. A talented core of begins to build upon the foundation that Herc develops.”

One of those DJs who built on Herc’s foundation was Grandmaster Flash. Flash’s portrayal in the series is the first clue to the audience of the show’s blend of myth and reality. Grandmaster Flash is portrayed as if the groundbreaking musician’s life was filtered through a Shaw Brothers kung-fu movie.

It’s an effective way to acknowledge to the audience two important details. First,  it allows the audience to see Grandmaster Flash as our characters do: a wise, musical genius who helped created a movement. Second, it clues the audience in that THE GET DOWN is a folk tale made in the American melting pot that mixes and blends all cultures. It’s this folk tale style that exaggerates the truth to match the larger than life music of hip-hop informs the stories of Zeke and Mylene. Zeke begins to express himself through poetry and the infancy of hip-hop while Mylene begins a career in disco, but the folklore of their stories comes from the way they find themselves confronted with the diverging paths of artistry: independence and commercialism.

Zeke has soul of a poet, but he is hesitant to reveal this side of himself. His English teacher puts him on the spot, but he refuses to perform his poetry out of fear of ridicule. He has no voice and, much like many young men of color in 1970’s New York, no medium to express himself. When Zeke finally recites his poem it is a raw exposure of his soul. He can’t figure out how to properly share that gift until he discovers the early form of hip-hop developed by Grandmaster Flash:

“Boom. Then crash. The shattering of glass. Dive to the floor. Busting my ass. What the hell was that? It was all that I said. I could see the pool of blood. I seen my moms was dead. No emotion in the commotion. I wasn’t even sad. Not even when I learned the bullet was meant for my dad. Vietnam made pops crazy. He was already half-dead. So why couldn’t that have been him that got shot in the head? All the news that’s fit to print. Mama’s death went unreported. Not a whiff of word. They don’t care about us niggas is how my pops explained it. But I didn’t know I was a nigga until my dad proclaimed it…”

Zeke’s poem, performed with heartbreaking intensity by Justice Smith, gives the audience insight into the deaths of his parents and his hopes to rise above the poverty he was born into. This poem gives us not only a look at Zeke’s hopes, but a look into the future of hip-hop. The kind of raw honesty about inner-cities forgotten by a white controlled media and political structure would evolve into the foundation of rap music. Zeke is fictional, but his art as presented in the series is all too real. He represents the future of the hip-hop genre and the authenticity of its language.

CLICK: Sound and Vision in Bowie, Radiohead, and Kendrick Lamar

Mylene is also an aspiring artist. She is gifted with a powerful voice and wants to become a disco singer. Her arc is a well-worn one in fiction: she is the daughter of an overprotective preacher (Giancarlo Esposito) who refuses to let her, in his opinion, debase herself and sing anything outside of gospel music. She finds a way around her father’s strict guidelines with the help of her uncle (Jimmy Smits) and washed-up record producer Jackie Moreno (Kevin Corrigan).

Mylene’s aspirations for stardom are romantic and filled with wide-eyed optimism about getting out of the Bronx and making a better life for herself. Jackie stands in contrast to those ideals as a product of the music industry that Mylene wants to be a part of. Drug addicted, in debt, and spurned by the record companies he once made rich, Jackie Moreno is the end-point reality of Mylene’s fantasy.

Through Jackie’s arc, the audience sees the harsh realities of the music industry. It’s unclear which came first: Jackie’s vices, or his inability to create new music, but both seem to have an equal hand in his blacklisting from the major disco record labels. In spite of all of his successes, Jackie is seen as washed-up and washed-out by the industry he was once so successful in and he becomes the shield for Mylene’s dreams. He absorbs the cynical truths about the record industry so she can maintain the beautiful dream of becoming a star. This becomes especially evident when Mylene finally creates her first single that Jackie has to bring around to record executives.

Jackie recognizes Myelene’s talent and does his best to sell her ability to the record companies in the city. One executive turns out to be a former intern who Jackie took advantage of while he was a producer. In an inversion of the typical trope where a male executive uses sex to entice a female performer, the female executive forces Jackie into performing sexual acts, only to deny him a record contract for Myelene. Jackie hides the truth from Mylene about what he was forced to do to protect her idealism. Jackie can’t bear to let the Mylene’s ideas of fame become tainted by the truth. Much as the glamour of fame hides an often corrupt influence, Myelene does not know the horrible truth about the music industry’s exploitation of its creators that the audience sees first hand in Jackie’s experiences.

Meanwhile, Zeke’s encounter with the corporate aspect of music is metaphorical and comes in the form of an an opportunity to speak on behalf of mayoral candidate Ed Koch (another real life figure colliding with the fantasy of THE GET DOWN, played by Frank Wood). Koch knows he needs the votes in the Bronx in order to become mayor, but he’s out of touch with the population. The campaign wants to use Zeke as a prop to appeal to the neighborhood’s minority and youth. They want Zeke to be their mouthpiece rather than speak his own mind. They are using him in a similar way that (usually predominantly white) corporations appropriate and exploit hip-hop culture for commercial gain.

CLICK: What is Nerd Music and must you be a nerd to listen to it? (No, but it might help.)

Zeke agrees to do it, hoping this will be his first step towards a better life outside of poverty, but he changes his words when he gets up to speak. Zeke intentionally, and subtly, references numerous graffiti artists in his speech as an act of subliminal rebellion against the anti-graffiti Ed Koch. He twists the words of the political system to convey a message to those who share his reality. By doing so, Zeke maintains his authenticity and reality rather than conforming to a fictional idea for success. This is ultimately the decision faced by all artists, musicians or otherwise: maintain their conceit of what they believe their art should be, or try to create something with broad appeal. Do you conform to the masses, or make the masses conform to you?

That is the central question at the heart of the characters’ conflicts in THE GET DOWN. By asking this question, and by blending fantasy with reality, the series also positions Zeke and Mylene as symbols for the genres they perform in: disco and hip-hop. This choice makes the significance of the THE GET DOWN’s unique “previously on” episode recaps clear. The recaps are actually flash forwards showing an adult Zeke (played by Daveed Diggs, voiced by Nas) performing in front of a massive crowd, telling them the story of his youth, merging the authentic with fantasy. Mylene on the other hand is nowhere to be seen in these flash forwards, and the decline of disco is coming.

The story of THE GET DOWN is meant to be seen as a fairy tale, a literal urban legend about the birth of a movement. Rock and roll has been glamorized and fictionalized to death, and hip-hop is long overdue for a story that treats it with the same mythical reverence that its artists achieved when they blended the real with the imagined. Which, ultimately, is the way to make any powerful story: imagine the fantastic, but ground it in the truth.