With everyone’s favorite webslinger swinging back into theaters this July, ComicsVerse is taking a look back at SPIDER-MAN’s greatest adventures. From the big screen to the small screen to a simple comic panel, we will find out how this ol’ Web Head has evolved since he first webbed his way into our imagination.

The Sony Pictures/Marvel Studios collaboration, SPIDER-MAN: HOMECOMING, is just about to swing into theaters, but Sony has just announced their own Spider-Man centric cinematic universe. If Marvel is using Peter Parker/Spider-Man, how can Sony have a Spider-Man Cinematic Universe without Spider-Man? Well, good thing there are two main Spider-Men. Will the studios be smart enough to work out a multi-year plan to deliver the best narrative possible? 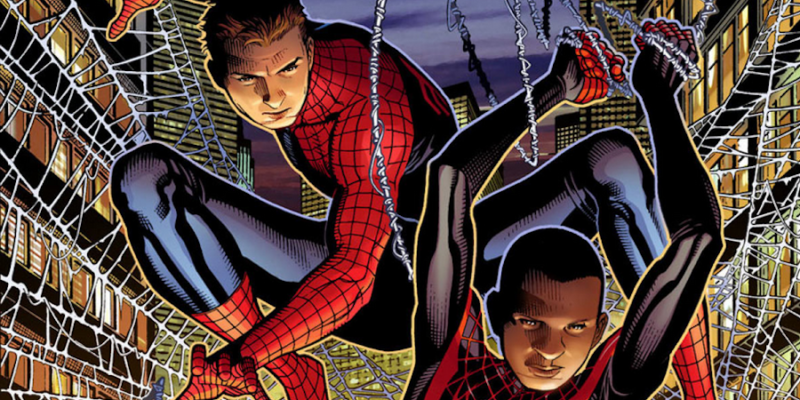 Sony is currently allowing Marvel Studios to use Spider-Man in the movies as part of a deal that the two companies struck back in 2015, but Sony still holds the film rights to the character. But, even though Sony is notorious for making poor decisions when it comes to Spidey, it doesn’t seem like Sony is going to try to use their own version of Peter Parker/Spider-man while Marvel is using the character. VENOM and SILVER & BLACK, the tentative name for Sony’s Silver Sable and Black Cat team up film, will not feature Spider-Man…yet.

What if Sony is going to try to build out their own Spider-Man centric universe without Spider-Man? At least until Marvel Studios are finished using the character? Marvel Studios is very smart with how they use their characters on the big screen. Unfortunately, there is one major criticism that I heard after CAPTAIN AMERICA: CIVIL WAR: nobody died.

READ: Who are the THUNDERBOLTS? Click here to find out!

But Marvel Studios is in a unique position with the character of Spider-Man, they have another Spider-Man in Miles Morales that is immensely popular and is just waiting to make his big screen debut. If Marvel and Sony both play their cards right, they both use a Spider-Man and both be successful while doing it. Allow me to explain this in a bit more detail.

Spider-Man teams up with The Avengers and The Guardians of the Galaxy to take on Thanos in AVENGERS: INFINITY WAR. This marks Spider-Man’s third appearances in the MCU.

Sony begins their Spider-Man centric Cinematic Universe with VENOM, starring Tom Hardy. The film alludes to Spider-Man, references Spider-Man, but never shows Spider-Man. Spider-Man has seemingly been gone for a few years. Venom could potentially be working for the Government as a means to continue protecting New York in Spider-Man’s absence. Perhaps, it could be a slight twist on the THUNDERBOLTS, Marvel’s super-team of reformed criminals. Potentially, we could see an imprisoned Eddy Brock is forced to become Venom again after the symbiotic kills all of its other hosts. Reluctantly, Eddy becomes Agent Venom.

Spider-Man is rumored to appear in the next Avengers sequel, making that his fourth appearance in the MCU.

The Silver Sable/Black Cat movie, SILVER & BLACK, comes out, further expanding Sony’s Spider-Man Cinematic Universe. They would potentially also be working for the Government, same as Venom, to help protect. New York. There is more reference to Spider-Man, but still not shown. Possibly some heist on a Parker Industries building.

SPIDER-MAN: HOMECOMING gets a sequel, the fifth appearance of Spider-Man in the MCU. In an after credits scene, we see the young Miles Morales get bit by a radioactive spider while visiting his uncle, who is secretly the character, Prowler.

Sony will presumably put out a sequel to VENOM by this year if it is successful at the box office. This film could be a team-up of Venom, Silver Sable and Black Cat in a THUNDERBOLTS fashion. Or, it could be a simple solo sequel expanding upon the character and his villains. Maybe even has Carnage as the villain.

Spider-Man is given a break this year in the MCU. This would be because Spider-Man will have appeared in majorly in a film for five consecutive years. The studio would be smart to try and avoid exhausting the audience of the character.

Sony releases a new film in the Spider-Man Cinematic Universe with another one of Spidey’s allies or enemies, or expand upon the idea of a THUNDERBOLTS style team. The film introduces a greater threat the extends past this film.

In the summer, Spider-Man gets the third installment in his MCU trilogy. The Sinister Six team-up to take on Spider-Man and in the final battle. Peter Parker fights to his last breath, dying in the arms of Aunt May and Mary Jane. In the post-credits scene, we see Miles Morales talking to someone he trusts, maybe his best friend, Ganke Lee. Miles tells them how he’s had these powers for so long, but didn’t do anything to help, and now Spider-Man is dead. He won’t do that anymore, that he will do what he should’ve been doing all along. He will be a hero.

In the Fall, Sony releases a third VENOM sequel or a sequel to SILVER & BLACK. This film deals with the bigger threat. During the final battle, all hope seems to be lost as the team of characters Sony has put at the forefront are not enough to stop the major threat that was introduced in the previous film. At the last moment, Spider-Man arrives to help them defeat the threat. He is older, maybe mid to late 30’s. By the end, you find that Peter Parker retired as Spider-Man years ago to raise his daughter with his wife, Mary Jane. He has since started his own company, Parker Industries.

After this transition, Marvel will have Miles Morales as their Spider-Man, and Sony will have an older, family-oriented, philanthropist Peter Parker that we have not yet seen on the big screen before. The companies can go on to establish these characters in their own rights and maybe even a few more years down the road, have a SPIDER-MEN(2013) or SPIDER-VERSE(2014) crossover between the two studios. These potential films would not only the make fans happy; but, it would be incorporating the comics and make both companies a lot of money. If you want to know more about these crossover comics, click here!

RELATED: Is SPIDER-MAN: HOMECOMING actually a Miles Morales story? Click to find out!

I believe there is an excellent chance that Sony will work with Marvel Studios in a very similar way to how I have speculated. Sony has tried before to cut corners on narrative with AMAZING SPIDER-MAN 2, and it cost them. The film was a commercial and critical failure. After costs and expenses, TASM2 only earned the studio about $70mil. Marvel Studios DOCTOR STRANGE earned them $122mil after costs and expenditures. That’s almost double the profit for a character previously unknown to casual movie goers against freaking Spider-Man!

By this point, I think they have learned from their mistakes. Sony should know now that the key to making the most money off these characters, is to make genuinely good and fun films. In a world where the market is flooded with superhero movies, just getting the characters on screen won’t cut it any longer.

We, the fans, know what we want. We have told Sony time and time again how we all feel about the quality of their previous Spider-Man films. Now is the perfect time to listen and take action. And I am very excited to see what they’ll do.