THE FOREVER WAR is set in a universe where people from Earth have begun to colonize far-off planets. When an alien spacecraft destroys a spaceship full of colonists, Earth declares war against these aggressors and recruits soldiers to fight this new threat. William Mandella is one such recruit who takes part in an elite military program where he learns to battle the “Taurans.” THE FOREVER WAR is a republishing of the 1988 graphic novel by Joe Haldeman and Marvano, which was adapted from Joe Haldeman’s 1974 Hugo Award-winning sci-fi novel of the same name.

I’d be lying if I said that it wasn’t obvious to me that the visuals for THE FOREVER WAR #1 were made almost 20 years ago. There’s just something about the color palate that is super 1980’s to me. However, I don’t think this takes away from the comic at all. Although Marvano’s visuals definitely look dated, there’s something really cool about how retro this comic feels. Reading THE FOREVER WAR #1 felt like watching an 80’s sci-fi flick. Maybe the visuals of THE FOREVER WAR #1 don’t look the way they would if it was remade today, but ultimately, they work because the story still holds up. 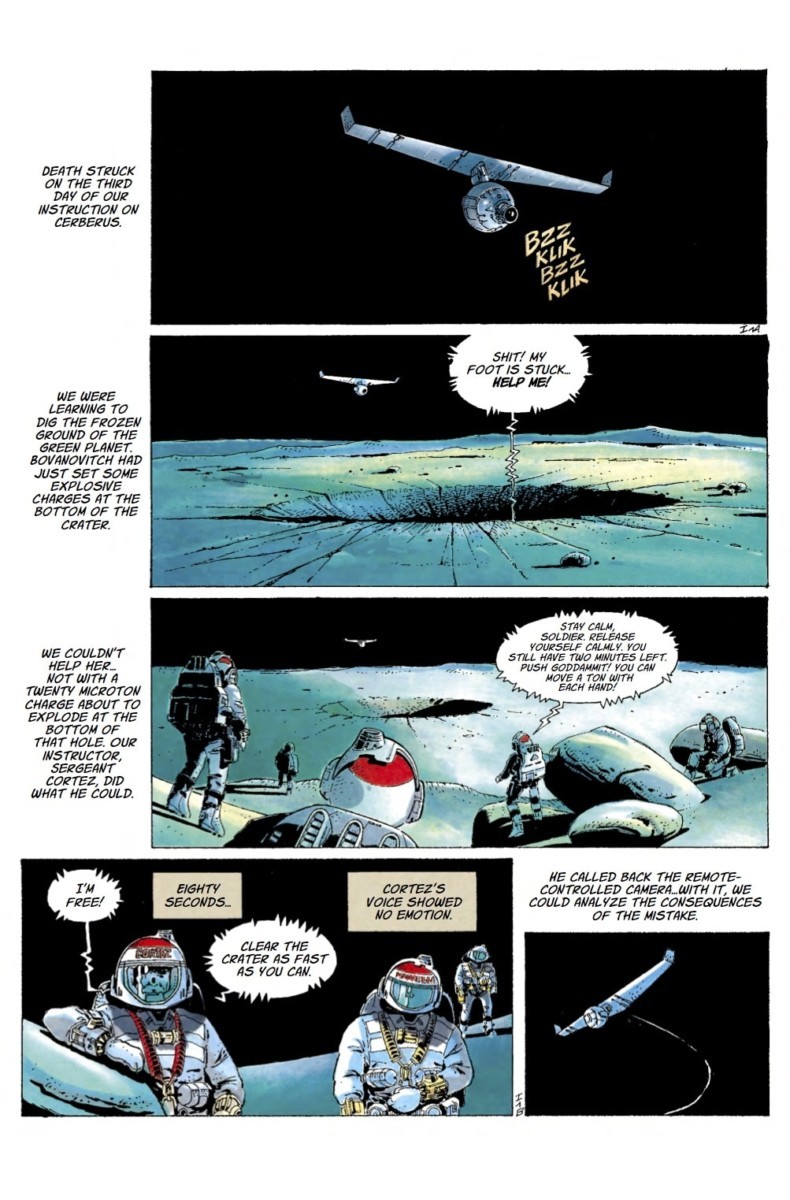 The dated visuals are also effective in conveying the gritty space atmosphere of THE FOREVER WAR #1. From ALIEN to 2001: A SPACE ODYSSEY, space travel is usually depicted as a glamorous and sterile procedure. THE FOREVER WAR’s take on space travel is anything but. The travelers are accelerating so fast that they cannot safely move around the ship. They need to change their positions in bed constantly or they’ll develop bed sores. One passenger even has a rib burst through their chest because of the intensity of the pressure they’re subjected to.

READ: Looking for another Titan Comics series? You need to read HOOK JAW #1!

If you go into THE FOREVER WAR #1 expecting a fun and glossy science fiction adventure, you’re going to be disappointed. Haldeman wrote the original novel as a reflection on his experiences as a soldier during the Vietnam War. Although it is a loose allegory, the parallels between the interplanetary war being fought in THE FOREVER WAR and actual war is evident even now, over 30 years after the novel was published. In THE FOREVER WAR #1, the government sends soldiers to battle an enemy they know nothing about. After the Taurans destroy an Earth spaceship, the people of Earth demand that the government retaliate. Although they know nothing of the Tauran’s motivations, the government begins training soldiers to destroy them.

The faceless nature of the Taurans is a reflection of the impersonal nature of warfare. Although the internet has increased our ability to see what’s happening in other parts of their world, our lives are still affected very little by conflicts taking place overseas. Because the war is taking place elsewhere, civilians have very little understanding of the toll that war actually takes. It’s easy for the people of Earth to demand a response to the attack since they will not face the repercussions. 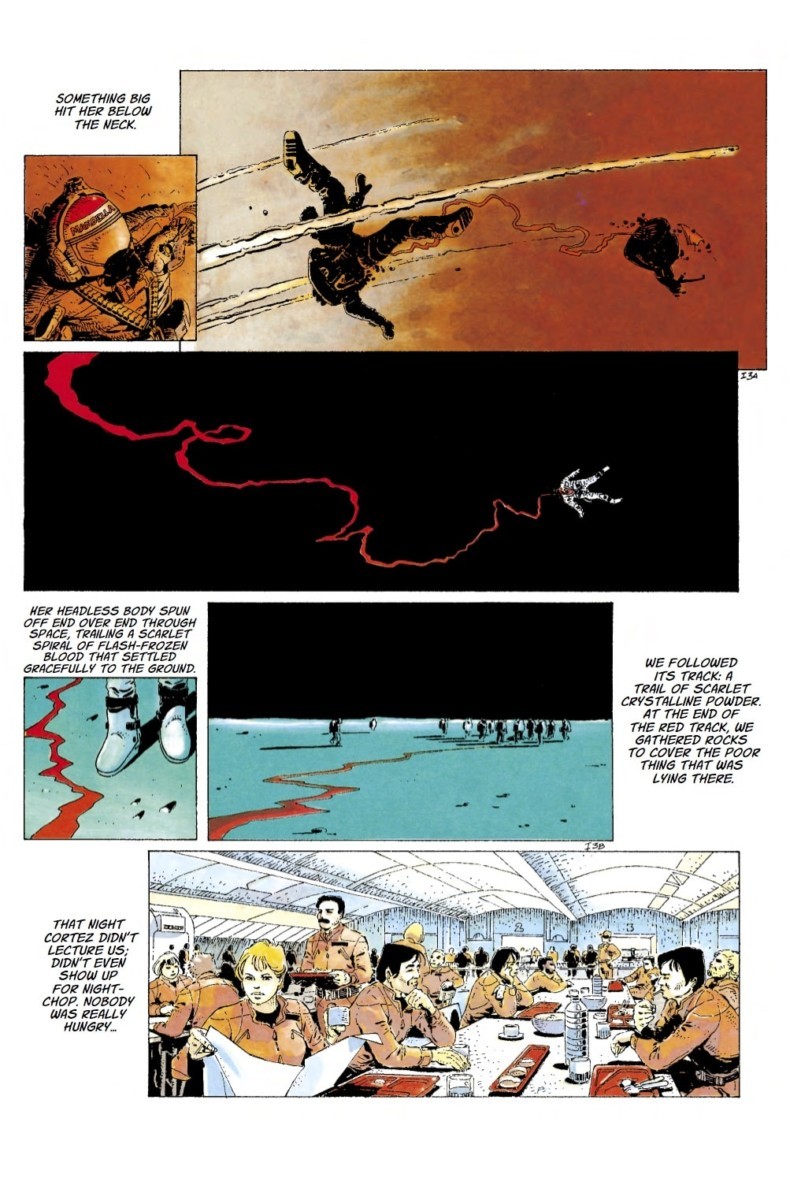 Although THE FOREVER WAR can be interpreted as a general allegory for war, it is specifically an allegory for Vietnam. The United States entered the Vietnam War to prevent communism from spreading to South Vietnam. U.S. forces were at a severe tactical disadvantage because they were fighting in an unfamiliar location against guerrilla fighters. Like Vietnam, the government in THE FOREVER WAR is sending soldiers into a situation they know little about without a clear endgame.  The soldiers training to be part of the United Nations Exploratory Force are training to fight Taurans as if they were fighting people. In reality, they don’t know what the Taurans look like, how big they are, where their vital organs are, etc. It’s impossible for the higher ups to prepare the soldiers for what’s to come since no one has any idea what they’re going up against.

Although THE FOREVER WAR #1 doesn’t provide Mandella’s backstory or any information about his personality, we do get a sense that he feels helpless and on some level understands the futility of his situation. When he arrives on the planet Cerebus for training, his instructor tells him that the only way to get back to Earth alive is by surviving a combat tour. Some of his fellow recruits don’t even survive the rigorous training program. It’s not yet clear if Mandella willingly joined U.N.E.F. or if he was forced to be part of the program. Being that THE FOREVER WAR is an allegory for Vietnam, which relied heavily on the draft, it’s likely that Mandella had no choice but to join. Either way, it becomes clear that Mandella has lost all personal agency and that the government is likely sending him to his death.

Mandella is intended as a stand-in for Haldeman, who was drafted against his will to serve in Vietnam. Haldeman did everything in his power to avoid the draft: he tried to get a job working for the military, applied to join the Peace Corps, and petitioned for conscientious objector status. When he received his draft notice he considered renouncing his citizenship and fleeing to Sweden. Mandella embodies the feelings of betrayal and abandonment that Haldeman felt towards the U.S. government during and after Vietnam.