CW’s THE FLASH has finally brought longtime Flash rogues’ gallery member Abra Kadabra to the show. In May 1962, THE FLASH #128 introduced Abra Kadabra. He has repeatedly fought several speedsters over the years. In this episode, Kadabra offered to tell Barry Savitar’s identity to prevent Iris’ death: in return, they would allow him to escape Gypsy. Abra Kadabra proved to be a formidable opponent for the entire Flash team, using an array of tricks to abscond and deflect their attacks. In this article, we’ll be comparing the comic book version to the live-action version of Abra Kadabra – and by the end, we will determine which one is superior.

Originally named Citizen Abra, he came from the 64th century. Abra Kadabra decides to steal a time machine for a one-way trip to the past since stage magic has become obsolete in the future. Once there, Abra Kadabra used the technology of the future to entertain the people of the 20th century in Central City. However, when his audience would not applaud, Abra Kadabra would use a hypnotic device to force them to cheer for him. Eventually, he realized that even in the past people were more interested in crime than magic. Kadabra decided he would steal to gain publicity and achieve fame; thus began his career as a thief.

READ: Check out our Character Spotlight on the villain Plunder!

THE FLASH does not go into specific details on the origin of their version of Abra Kadabra. Gypsy informs the Flash team that he hails from the 64th century and that he uses nanotechnology that makes his abilities seem like magic. Throughout the episode, Abra Kadabra steals several items to build a time machine to return home. The show doesn’t make clear whether Abra Kadabra was ever a practicing magician in his time or why he is in the past at all. The show gives us the bare minimum regarding his backstory. 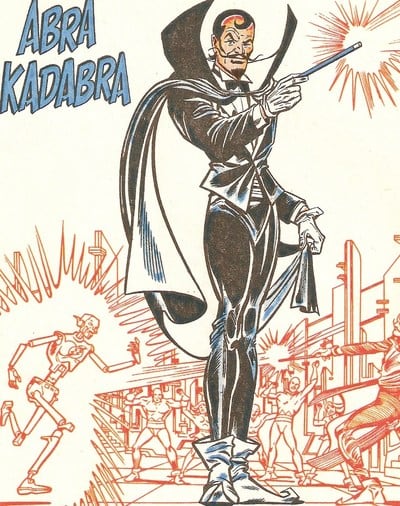 Naturally, a character who has been around for over 50 years is going to go through several different character designs. His initial design features him wearing a form-fitting black suit, a white collared shirt, and a black tie. Over his fancy suit, Kadabra has a long black cape with a huge popped collar similar to Marvel’s Doctor Strange. Kadabra also wore the traditional white gloves of a classic magician. As for his face, he usually had a pointy black beard and a villainous twirly mustache. This was the design for Abra Kadabra for quite some time during his confrontations with the Barry Allen Flash. As time passed, Kadabra would remove his tie, and he would later unbutton the top of his shirt.

It wasn’t until he faced off against the Wally West Flash that Abra Kadabra received a costume update. Kadabra is left horribly burned and disfigured after an attempt to destroy Wally West literally backfires. Afterward, his outfit consisted of a white button-up shirt with several of the top buttons undone. His shirt now had a huge collar instead of his cape – which is also popped up. Changing up the gloves this time, Kadabra decided to wear black gloves that go up to his mid-forearms. His pants were still black and skin tight, but this time he had a black sash holding them up. In DC Rebirth, it seems that Abra Kadabra is returning to his original outfit with some minor alternations. His jacket now has white lightning bolt-like strips coming from the back leading from the buttons on the front. 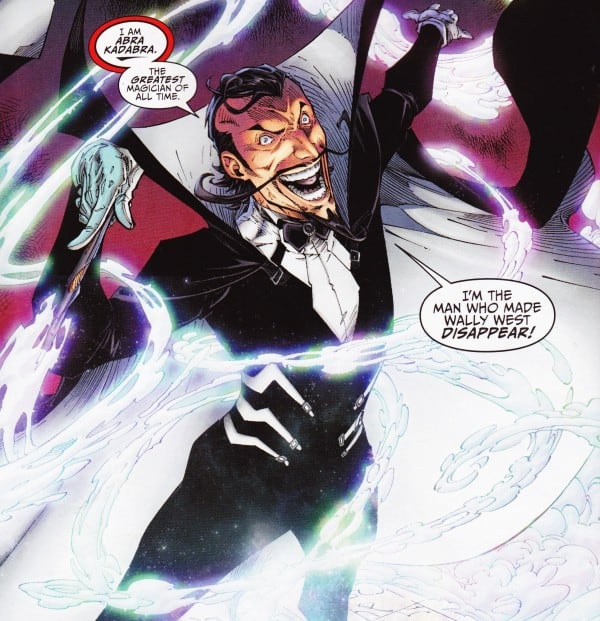 The depiction of Abra Kadabra on THE FLASH looks far less flamboyant than his comic book counterpart. He sports an all-black outfit: a zip-up collared shirt, a jacket with a tail that goes down to his mid-thigh, and pants with a belt. It’s one of the less flashy re-designs for the show. One primary difference is that Abra Kadabra on the show has bright white slicked-back hair. He also has a modern goatee instead of the traditional mustache and beard from the comics. The show’s designers most likely went for this simpler design because his outfit from the comics would be far too cheesy- even for a CW show. 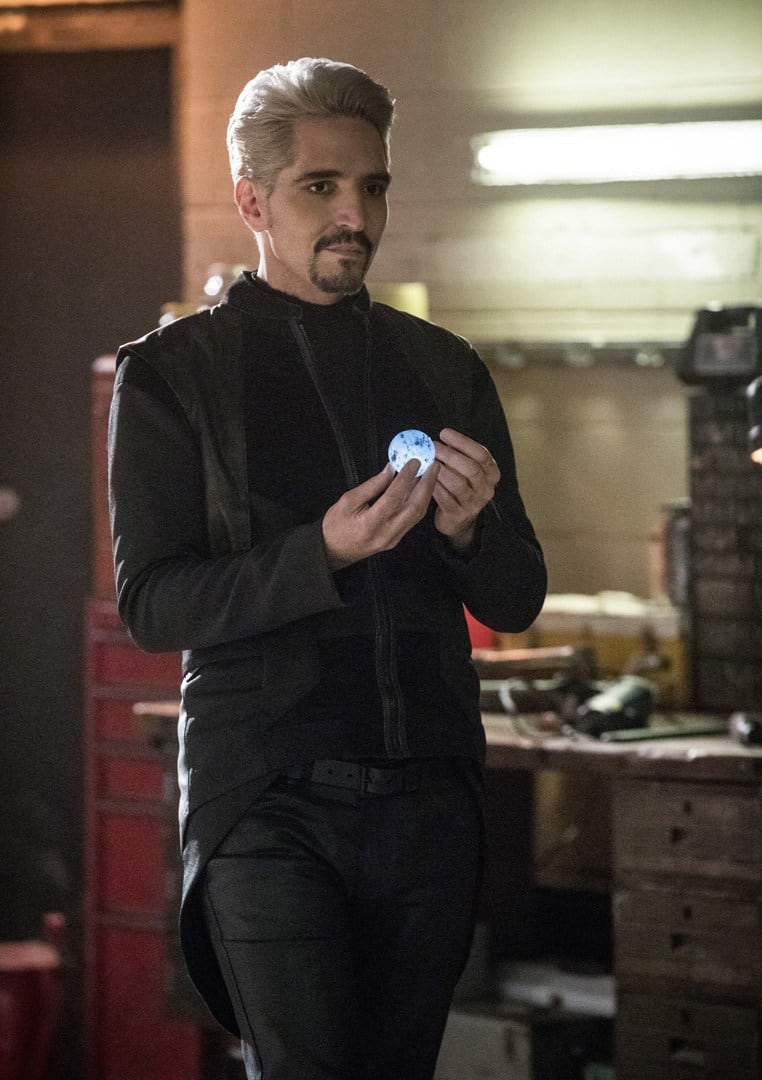 As mentioned previously, Abra Kadabra was initially not an actual magic user. He merely used the technology of the future to make it appear he was doing magic. His trademark device was his hypnotic ray, located in the lapel of his flower. It was capable of paralyzing people and forcing them to do his bidding. He also had a transporter which allowed him to teleport short distances. Eventually, Kadabra made a deal with the Demon King Neron for actual mystical powers. Abra Kadabra was now able to cast spells and shoot fireballs. He still used his wand whenever he did magic, even though it wasn’t necessary; he just kept it for the theatricality.

READ: DC’s LEGENDS OF TOMORROW wrapped up season 2, see our review of the episode!

The show had Abra Kadabra use nanotechnology to portray magic. The feats he can pull off are quite remarkable. He phased two security guards into a glass container and proceeded to drown them. His other talents include sleight of hand, disappearing by shooting out a deck of cards, turning a gun into a water pistol, creating holograms, and teleporting. The limits to which he can use these abilities is never made clear in the episode.

In the comics, Abra Kadabra is extremely confident in himself. He tends to underestimate his opponents because of this, which usually leads to them outsmarting him at his own game. There is nothing he will not do in order to be in the spotlight. He became a thief when he saw that the citizens of Central City responded to crime. A good example of the ego of Abra Kadabra would be when the Barry Allen Flash sends him back to the future: he willingly stays because in prison he has an audience who always applauds his magic act.

Kadabra is also self-confident on THE FLASH. He expressed confidence when he gambled his life in exchange for his knowledge of Savitar’s identity. He was confident that Barry’s love for Iris outweighed his desire to seek justice. In the end, Kadabra didn’t care whether the Flash let him go or not. In fact, he preferred letting Iris die – that way it would be as if he was killing her along with Savitar. He does not seem to enjoy theatricality as much as his comic book counterpart, nor is it shown that he craves the spotlight.

Which version is the best? 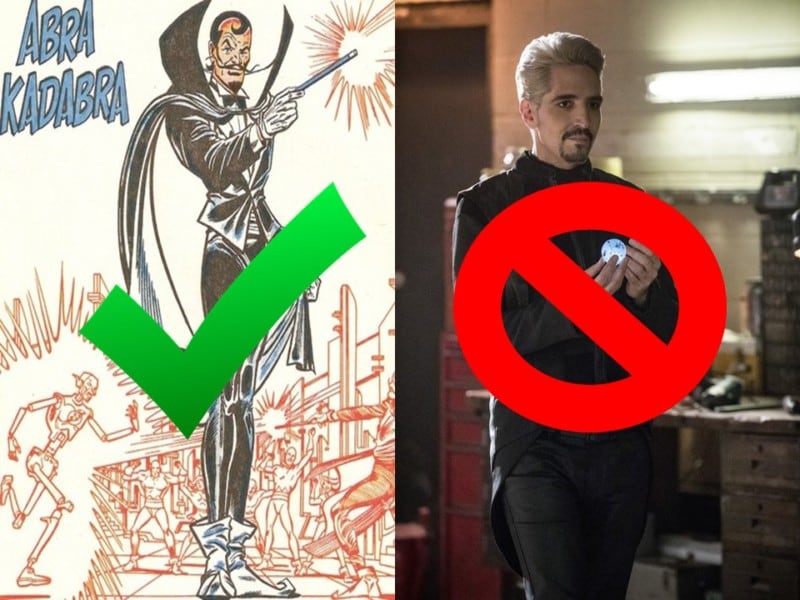 The comic book version of Abra Kadabra is far superior to the one depicted on the show. Abra Kadabra’s origin in the comics is evident, whereas THE FLASH gives no background for its version. The outfits are no contest either. The comic version plays up the campiness and truly embodies the look of a magician. I understand Kadabra’s role in this episode is only to give Barry the idea to go to the future to figure out how to prevent Iris’ death. The creators were clearly unconcerned with making Abra Kadabra look memorable like his cheesy comic book counterpart. As for personality, the comic version is more fun due to his over-the-top nature. The Abra Kadabra on the show is far more mundane and serious than he is in the comics.

This trend in comic book movies and shows where the creators modernize the outfits and personalities of classic characters is a double-edged sword. At times it can be beneficial, like with two other Flash villains; Plunder and Rainbow Raider. Both received updates to their designs which were influenced by their comic book counterparts but altered to be more realistic. These changes aid these characters by making them go from throwaway cheesy villains to actual threats to the Flash. On the other hand, in making characters appear more realistic, both in design and personality, they can lose elements that make them unique. Abra Kadabra’s cheesy campiness in the comics is what makes him an enjoyable character. The show’s version is not as compelling as a result of the update.

Do you agree with our choice? What did you think of Abra Kadabra? Let us know in the comments below!