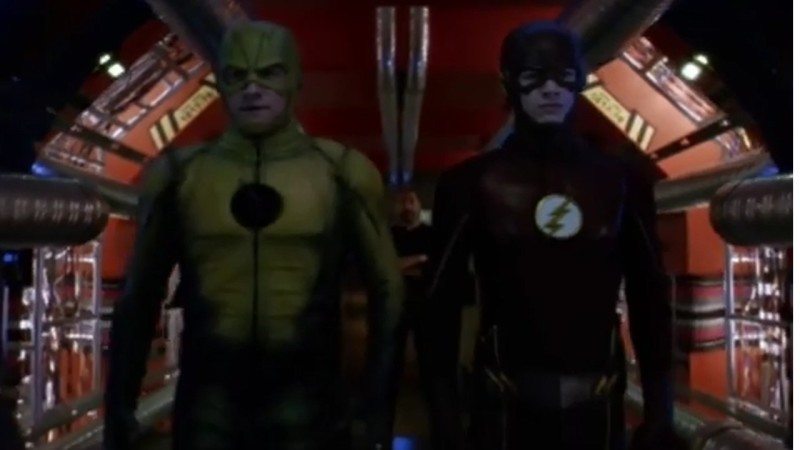 Following the break-up with Patty, Barry tries to distract himself by devoting all of his time into being the Flash. Meanwhile, the West family deals with the upcoming death of Francine West. But the biggest focus of this episode is on the return of Barry’s past (and future) adversary; Reverse-Flash! How is the Reverse-Flash still alive? What impact will he have to the Flash team? Let’s find out!

There is so much to love about this episode! The way the Flash writers handled time travel in this episode was perfect. When dealing with stories that have a time travel element, it’s best to spend as little time explaining it as possible. If you spend too much time trying to explain it then you risk confusing the audience. Thankfully, Harry was able to explain it with enough simplicity that general viewers were able to understand how the Reverse-Flash is alive and in this time period; this Reverse-Flash has not discovered the Flash’s secret identity, nor has he killed Barry’s mother, yet. As Harry points out, this is the origin story of the Reverse-Flash from season 1.  Now while I did enjoy Tom Cavanagh’s Harrison Wells/Reverse-Flash from season 1, the episode “Who is Harrison Wells?” introduced us to Matt Letscher as the Reverse-Flash. In my opinion, Letscher is the quintessential Eobard Thawne/Reverse-Flash, in both appearance and acting. He brings out the obsessive personality of Eobard Thawne while still being intimidating to our heroes, and I look forward to seeing him reprise this role in future episodes.

Upon discovering that Reverse-Flash is still alive, Barry is clearly frustrated by this news. Eobard Thawne’s existence meant that all of the sacrifices made by his friends and family were for nothing. I also love the fact that even though Reverse-Flash was beaten by the Flash and put into a cell with no chance of escaping, he still appeared to be completely in control. When Cisco talked to Reverse-Flash and he had his ‘Bye Felecia’ moment (hilarious by the way) Reverse-Flash seemed calm because he knew that in order for Cisco to be alive in this timeline he had to be sent back to the future. I love the conversation the Flash and Reverse-Flash have before Barry sends Eobard back; in the conversation, Barry shows some great character growth in accepting that his fight with the Reverse-Flash will never end. The Flash and Reverse-Flash have impacted each others lives, and neither one can exist without the other. It’s like the Joker told Batman in THE DARK KNIGHT: “You and I are destined to do this forever.”

READ: Hear all about the best Batman/Joker clashes!

Now, as for the West family storyline, once again it was superb. The creators are handling the approaching death of Francine with the seriousness it deserves. We also get to see Iris and Wally interact one-on-one in this episode. After Wally was absent when Joe and Iris said goodbye to Francine, Iris pays him a visit. When she arrives, she decides to share her pain of losing someone close to her (Eddie) to let Wally know that she knows what he is going through. It appears that the two are beginning to form a sibling bond, but as with Joe, their relationship will take time.

The only downside to this episode for me was the continuation of the Patty and Barry storyline. It followed that annoying trope that superheroes can’t be in relationships because they are afraid of losing them. That trope is one of the many reasons I disliked the 3rd season of Arrow and it’s the reason I was infuriated at Barry for letting her go to Midway City, especially since she figured out he is the Flash and was willing to stay if he admitted it. Now Barry has lost yet another love interest because of his double life, although this sacrifice was completely unnecessary. However, I am able to look past the use of this tired cliché and appreciate all of the good in this fantastic episode!

The goggles worn by Cisco in this episode resemble the ones used by his comic book counterpart. I like that they are providing a reason for why Cisco needs to wear them – to unlock the full potential of his vibe powers. In the comics, Cisco wears the goggles as means to conceal his identity; he is able to see the vibrations of other worlds/timelines/future events without the goggles.

In this episode, Eobard Thawne reveals his origin story: he idolized the Flash and obsessed over his powers. He recreated the accident which gave him the same abilities as the Flash. However Eobard knew that he could never become the Flash, so he settled for becoming the reverse of everything the Flash stood for. This is practically the same origin story for Reverse-Flash in the comics when he was first introduced. The writers even used the reason why Reverse-Flash is traveling to the past, to get information on the Flash to use against him. Despite all of their similarities, there are some differences. The Reverse-Flash in the show appears content with being the greatest enemy to the Flash, while the one in the comics continuously wants to be the Flash – even going so far as to rewrite history in Post-Infinite Crisis when he masqueraded as the 25th Century Flash.

Now as for Earth-1 Jay Garrick being Hunter Zolomon- Hunter Zolomon is the name for Zoom in the comics, the very same Zoom who is the main villain this season. It is currently unknown if the Hunter Zolomon on the show is also Zoom. The name is all that we know that these two characters share, for now.

I loved this episode, especially since the previous 2 episodes were not the best the show has given. It was funny, heartfelt, and exciting –  it is what I’ve come to expect from a good Flash episode. If this episode did not have the unnecessary drama between Barry and Patty, I would put this episode in my top five favorite Flash episodes. Many questions about the Reverse-Flash were answered, but more questions about Zoom were raised. Next week the Flash team are up against Tar Pit, while a little more attention will be put on the Iris and Wally relationship. ‘Til next time, FLASH fans!