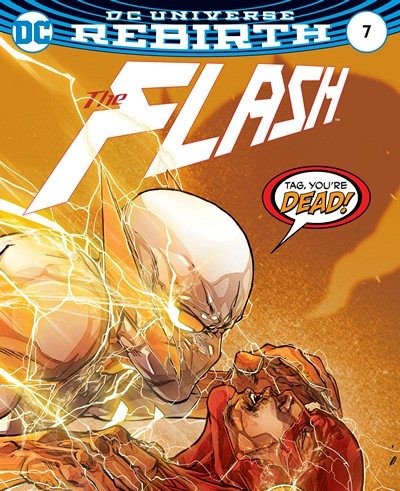 After losing his girlfriend and learning that his best friend August Heart is the evil speedster Godspeed, Barry has become severely disheartened. At the end of the last issue, Godspeed demonstrated his ability to produce duplicates of himself and proceeded to beat the Flash! How will our hero take on this superior speedster?

READ: Be sure to catch up on what happened in THE FLASH #6!

The issue opens with August’s origin as a speedster. After his monologue, Godspeed begins to feel intense pain due to maintaining his duplicate for too long. The Flash feigns concern in order to attack while Godspeed’s guard is down. The Flash then runs to S.T.A.R. Labs to recover from the fight. Meanwhile, Godspeed decides to enact his own brand of vicious justice on the criminals of Central City. After Wally meets with the Flash and explains how he and Meena bonded, Barry gets an idea on how to stop August. Like Godspeed, the Flash will take the Speed Force from the other speedsters, but this time they are willingly giving up their powers to help. The Flash’s plan works until Godspeed comes and lures him to Iron Heights prison, where he will kill every villain the Flash has ever locked up – including Eobard Thawne!

Writer Joshua Williamson does an excellent job of making Godspeed a villain with depth, while also keeping him distinct from Flash’s typical rouges gallery. Most of our hero’s speedster villains torture him out of jealousy, but Godspeed is different. Godspeed doesn’t want to hurt or destroy the Scarlett Speedster; in fact, he wants the Flash to help him seek justice for his brother. This was evident when Godspeed implored Barry to give up, as he did not want to continue fighting him. 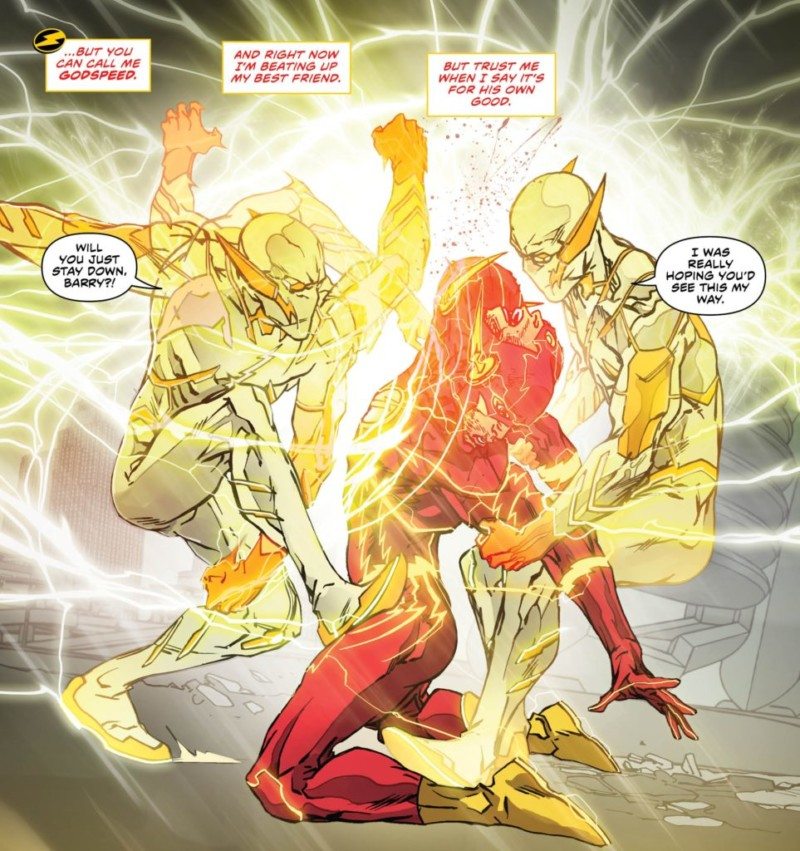 While Godspeed was reluctant to harm the titular hero, the new Kid Flash was more than willing to hurt the delusional villain. Although Wally may not have directly played a role in the defeat of Godspeed, he did give the Flash the idea to absorb the Speed Force from the other speedsters. The comic doesn’t go into much detail on the science behind the Speed Force. This is one of those cases of pseudo-science for comics, and it shouldn’t be dwelled upon too much. I would, however, like an explanation as to why Wally gets to keep his speed and Avery doesn’t. Unlike the other speedsters, Avery did want to keep her powers. 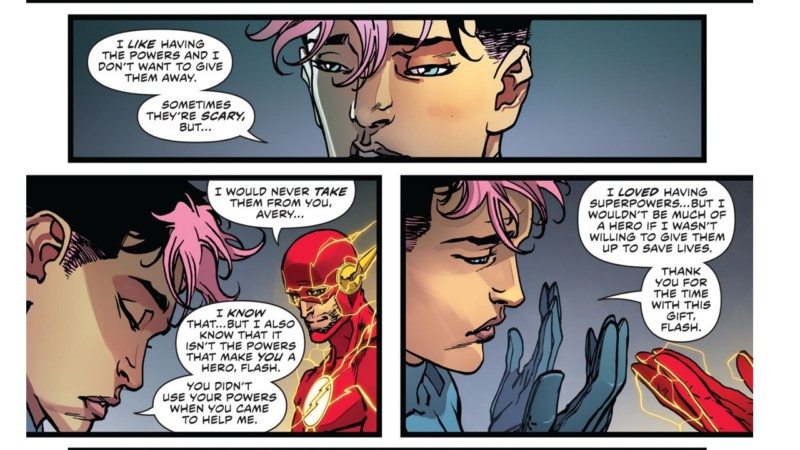 It isn’t fair that the Flash decided he would share the Speed Force with only one other speedster. I understand that the more people who share the Speed Force, the less powerful the Flash will be, but why does that mean we have to get rid of a female speedster? Hopefully Wally cherishes his fraction of the Speed Force, as I’d love to see more super speed action sequences. I especially look forward to more super speed fights if Carmine Di Giandomenico is the artist behind it!

The fight between the Flash and Godspeed was bright and vibrant. I also commend Giandomenico for portraying Godspeed’s emotional reactions, despite his entire face being covered. During the fight, Godspeed’s body posture and dialogue suggest that he doesn’t want to continue hurting his friend. However, since the Flash keeps resisting, Godspeed feels obligated to keep going. I also loved the artist’s detailed character expressions. When Avery explained to the Flash how she was reluctant to give up her speed, I could see the sadness in her eyes. The artwork is top notch that’s consistent throughout the issue.

READ: Speaking of talented artists, check out our interview with artist Kurt Ankeny!

THE FLASH #7 continues strong even after the reveal of its main villain. It only seems to be raising the stakes now that Godspeed is planning on murdering all of the Flash’s enemies. If you haven’t checked out this week’s FLASH, be sure to pick it up.