Written by SAINTS author Sean Lewis and brought to life by the unique pen of Hayden Sherman, THE FEW #1 showcases a dystopian world that seems incredibly weighty and real, even in the wake of recent culture’s HUNGER GAMES hysteria and overall dystopia fatigue. Be it through Lewis’ stark and to-the-point dialogue or the rough, sketchy stylings of Sherman, the reader knows from page one the world they have stepped into. 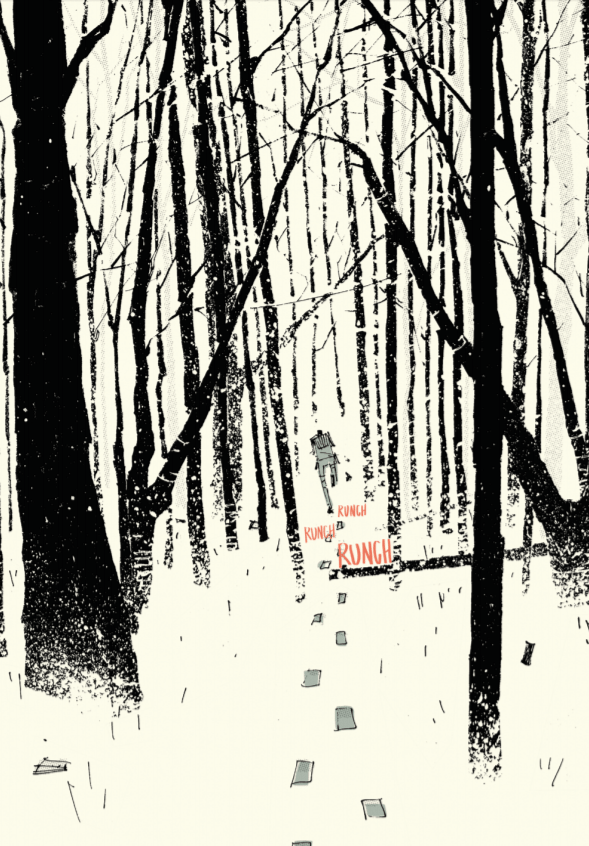 In the world of THE FEW, clean water is scarce throughout the land. The coasts of what used to be the USA have been swallowed up under the authority of  a governmental authority known only as the Palace, its bidding done on the power of one name: Herrod. Throw in a rebellion that goes by the name of The Remainder States, a yet unknown society that exists in defiance of this seemingly fascist status quo, and you have Image’s striking new action sci-fi series THE FEW.

READ: Consider yourself a fan of great science fiction? Compare your favorite sci-fi comics from 2016 with ours!

While we have yet to meet him, this world’s axis seems to be Herrod, a man for whom people kill, obey, and betray. While not explicitly confirmed in the series yet, it appears Herrod is the leader at the Palace that seems to be in charge of the murderous masked men we see in THE FEW #1. It would not surprise me that, in this USA divided into palace control and the rebellious bad land territories, he is the authoritarian figure keeping control through terror and charisma. However, in this divided land we have people still wanting to rebel, to fight against the Palace and Herrod’s regime. 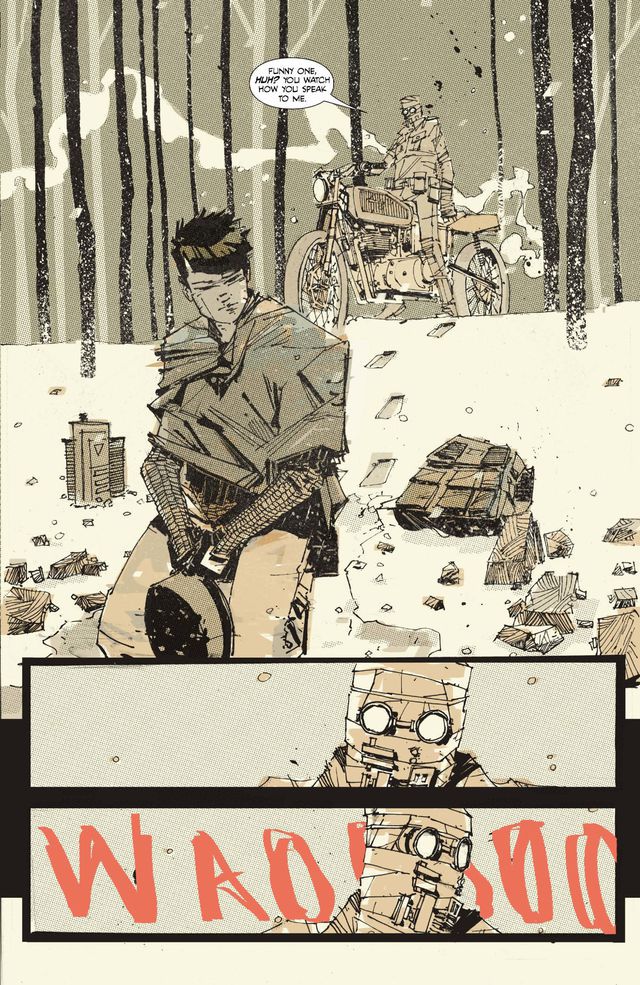 This territory that is being fought for is shown brilliantly in the artwork of THE FEW #1. Everything from our main heroes to the backgrounds is awash in drab blacks, whites, greens, and grays, with only the brutal splattering of blood and white snow to contrast this malicious monotony of color. This contrast really brightens up the otherwise more neutral  colored pages of THE FEW, and draws the reader’s eye right into the gruesome action of any one scene. In case it wasn’t clear already, THE FEW #1 gets bloody. This is MAD MAX meets the Midwest, so if you are squeamish, this isn’t the series for you. With the first issue alone boasting scenes of gruesome fights and many innocent people slaughtered, you can bet THE FEW will not be without its share of gore.  While the story is rich in violence, it has a more restrictive approach to the trickle of information. With little background knowledge told explicitly to the reader beyond there being a water shortage and the power struggle between The Palace and the remaining rebels of this world, THE FEW #1 manages to set up an intriguing mystery while providing an idea of the kind of America our characters have had to live in. 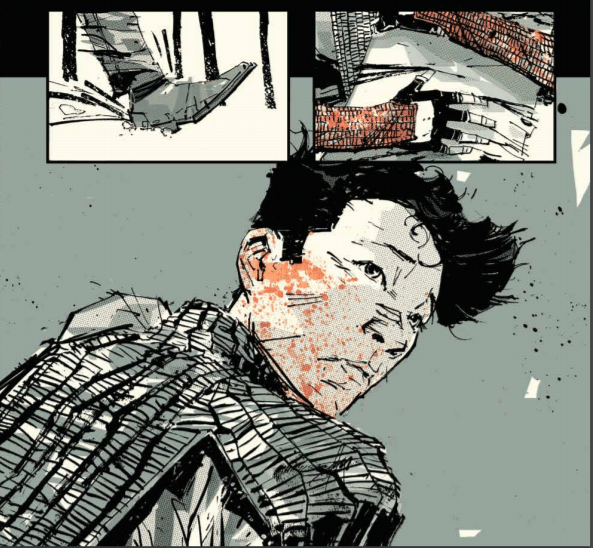 These rebels, and our main cast for this tale, consist of two rebel brothers and our protagonist Hale, a serious faced woman with a pixie cut, and thanks to the universe of THE FEW someone fully capable of slicing a man’s head from his shoulders. We follow Hale as she escapes into the woods, with a baby in her hands as she fights through various bloody and lurid threats before coming across the brothers. The brothers, only one whose name we learn in the first issue, seem to have a significant age gap between them. We start to see their true colors in a humorous scene a little bit after Hale encounters them, and it appears that they almost have a father-son older brother relationship. They have a strong bond, but stronger is their sense of survival, something I’m sure we will see as they and Hale move forward to the next issue. I won’t spoil the excellent climax of this issue for you, but I will say that THE FEW #1 leaves the reader hungrier than ever for details about this world, and where the path will lead our protagonists next.

READ: Some people argue that art shouldn’t be political. Here’s why they’re wrong.

A wonderfully written story, accompanied by brutally beautiful imagery and shocking twists, THE FEW #1 seems to be a start to a thrill ride you don’t want to miss.