This article contains spoilers for all THE FAST AND THE FURIOUS films.

I love these movies. Not even in a “guilty pleasure love” way, in a “these are legitimately good movies” way. It is difficult to explain my love for these films when I bemoan the existence of yet another TRANSFORMERS or ALIEN film. Part of what I, as well as many other fans, love about this franchise, can be boiled down to family.

“Family” is a word that gets used a lot in the FAST AND FURIOUS series, but what has given these films new life is a commitment to the relationship between the audience and the characters. The first three films, (THE FAST AND THE FURIOUS, 2 FAST 2 FURIOUS, THE FAST AND THE FURIOUS: TOKYO DRIFT) rotated cast members in and out of the series, but by the fourth film, FAST AND FURIOUS, it brought back the original crew of Dom (Vin Diesel) and Brian (Paul Walker) and eventually expanded the cast in the fifth, sixth, and seventh films. The FAST AND FURIOUS movies have fulfilled the promise that THE EXPENDABLES franchise failed to live up to, and that was putting together a crew of awesome people who have awesome adventures.

CLICK: Want a full review of THE FATE OF THE FURIOUS? Of course, you do. You’re family.

In his video essay on the series, Youtuber Rossatron addresses the appeal of the “family” dynamic:

“…More than just cars and explosions, what we [the audience] care about are characters, and when your characters care about something, that their wants and needs are reflected in the choices the filmmakers make, the audience has something relatably human to latch on to.”

While critics often dismiss these films, they manage to succeed at putting characters first. Audiences aren’t coming to THE FATE OF THE FURIOUS for the plot; they come to see how Dom, Letty, Roman, Hobbs and the rest of the family will react to the madness of the spectacle around them. Those motivations remain important. In fact, the characters’ desires, as well as their relationship with the audience, has led to some controversial creative choices in THE FATE OF THE FURIOUS and Dominic Toretto’s betrayal of his family. 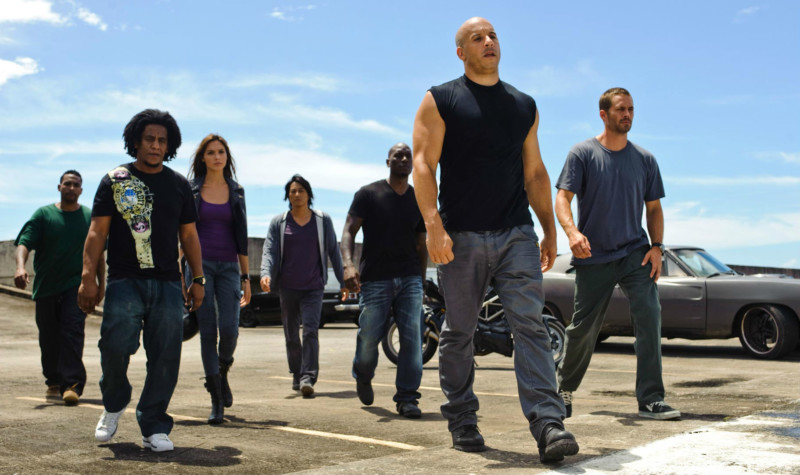 Vin Diesel is an actor most people either love or hate. He faces many of the same criticisms that actors like Keanu Reeves face. His performances are sometimes stilted and wooden, but there’s a level of sincerity to his commitment to the role that gives him an inexpiable magnetism. And while people may make fun of his mumbly line delivery, the man has managed to evoke tears from audiences with only the uttering of a few words (“Superman” in THE IRON GIANT; “We are Groot” in GUARDIANS OF THE GALAXY…I’m getting choked up just typing them).

This is all to say that Vin Diesel is a keystone to understanding the family core of THE FAST AND THE FURIOUS. The original film’s plot hangs on the idea that Dom is such a charismatic and likable guy that Brian O’Connor would throw away his entire career as a police officer for this dude he just met. Sure, he is in love with Dom’s sister, Mia (Jordana Brewster), but the film ends with Brian letting Dom go free entirely of his own volition. This core relationship between Brian and Dom will be the driving (pun intended) force of the series’ thematic idea of family.

Let’s digress for a moment here to talk about Choice Theory. Developed by psychologist William Glasser, Choice Theory is defined as

“…The most important need is love and belonging, as closeness and connectedness with the people we care about is a requisite for satisfying all of the needs” (The William Glasser Institute).

Consider the primary ethos of THE FAST AND FURIOUS films: family, above all else, is the most important. Choice theory is based around the idea that our interpersonal relationships bring us happiness. Our choices are made in pursuit of that happiness.

CLICK: Modern action and the move beyond toxic masculinity.

Jumping forward in the series, FAST FIVE continues to explore Choice Theory and its ramifications. Here the team is on the run and more destitute than they have ever been. After sacrificing their own freedom to rescue Don, Brian and Mia make their way to Rio De Janeiro to lie-low. Following them, each step of the way is Agent Luke Hobbs (Dwayne God Damn Johnson), the Javert to Dominic Toretto’s Jean Val Jean.

That relentless pursuit committed by Hobbs represents the external pressures put onto the family unit. FAST FIVE is about the fracturing of a family and how it stays together under duress. The family motif is brought even further to the forefront when Brian faces the prospect of starting a family with Mia. Brian reveals to Dom that he had a distant relationship with his father and as such the Toretto family has become his surrogate family unit. As Choice Theory dictates, Brian and Mia may be fugitives, but he finds happiness in the interpersonal relationships that he has developed. 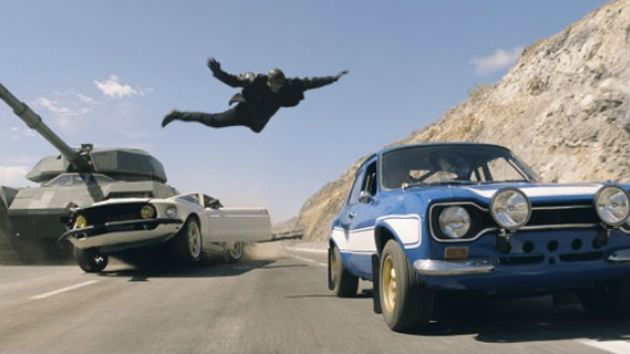 What was once a bunch of silly car racing movies has become textually about something far more potent. Here the characters, all outcasts, all persecuted by an objectivist judicial system, have found a sense of belonging together. By giving Justin Lin the freedom to let the characters evolve naturally from one film to the next, the characters developed genuine personalities that went beyond the somewhat generic action film archetypes of the prior movies. As the characters have grown, so has the connection with the audience and each other from film to film.

This is also where the films become this generation’s OCEAN’S ELEVEN. FAST FIVE reunites just about every major character from the previous four films and unites them as a team. The family tree grows even more branches with FURIOUS SIX when Hobbs officially becomes a member of the family and Dom is reunited with Letty.

Dom’s love for his family is his greatest strength but also his biggest weakness. FAST AND FURIOUS 6 gives him a villain who juxtaposes that philosophy. As Rossatron observes in his video, the Shaw brothers are the antithesis and the parallel to Dom’s belief in family. Owen Shaw (Luke Evans) rejects the family ideas and embraces isolationism and selfishness, concepts rejected by the Choice Theory, as mentioned above.

The dark parallel to Dom comes in the form of Deckard Shaw (Jason Statham). This Shaw brother is a force of nature through the film. Following the near death of his brother in Furious 6, he has become hell bent on killing off Dom’s entire family. He is a personification of what Dom’s love of family could become if turned to the side of “evil.”

That brings us to FATE OF THE FURIOUS. 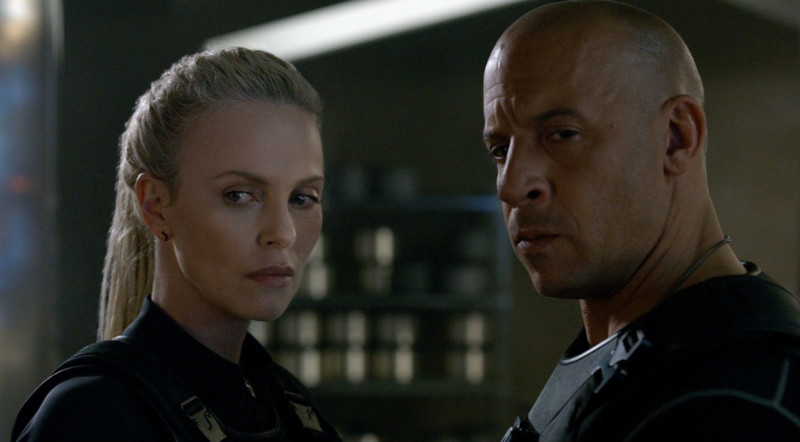 Choose Your Own F8

With everything that has happened in this franchise so far, the next logical step was to have Dom turn against the family (mind control is not a plausible explanation in these films…for now). So, instead, it is revealed that the cyber-terrorist Cipher (Charlize Theron) has kidnapped Elena Neves (Elsa Pataky), Hobbs’ partner and Dom’s love interest in FAST FIVE, and Dom’s son. Dom’s greatest strength proves to be his greatest weakness. By blackmailing him with the life of his son, Cipher gets Dom completely under her control. Dom is forced to betray family for family. He recognizes that without these relationships he is nothing, but he also cannot abandon one for another. Cipher’s destruction comes from committing one of the “Seven Deadly Habits” of choice theory: “bribing or rewarding to control.”

With Dom’s betrayal, the team is forced to ally themselves with Deckard Shaw. The uneasy alliance with an enemy can provide compelling drama. However, there is an issue with the internal logic of the film: Deckard was the one responsible for the death of Han in THE FAST AND THE FURIOUS: TOKYO DRIFT, but Han isn’t even mentioned over the course of FATE OF THE FURIOUS.

By the end, the team seems willing to shrug off past grudges as if Deckard beat them at the company softball game rather than murdering one of their friends. It’s a choice on the part of the filmmakers that flies in the face of the fundamental themes of family that the series has established so far.

CLICK: What’s next for modern action films? Return to the R-rating

Stick with me here, though: maybe the film is trying to say something deeper about how our choices define us. The title of the FATE OF THE FURIOUS at first seems like a jokey title (seriously, how is this movie not just called F8 OF THE FURIOUS?), but the idea of fate and choice also give us insight into the sudden redemption of Deckard Shaw. 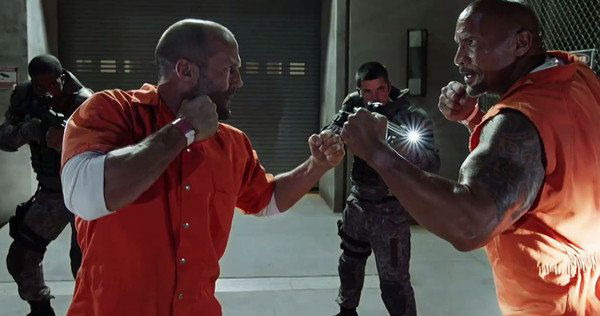 Choice Theory has ten central axioms, one of which states

“…What happened in the past has everything to do with what we are today, but we can only satisfy our basic needs right now and plan to continue satisfying them in the future.”

Imagine for a moment that Deckard was the hero of his film. We wouldn’t blame him for his vendetta against the team; rather we would be cheering him on. So many of Deckard’s choices are fueled by the desire to avenge his brother His main motivation for wanting to take down Cipher is the role she played in putting his brother in harm’s way. Blaming and punishment are what drive Deckard, but they are also considered “deadly habits” according to Choice Theory.

This is why we see his motivations, motivations that have been used for action movie heroes for decades, framed as unjustifiable. It’s not until Deckard commits the positive act of saving Dom’s son that he is accepted by the Fast family. Deckard’s actions still define him, but he cannot change the past. All he can do is make positive decisions for the good of others in the future.

Choose Your Own Fate

Is this enough for redemption? I’m still not sure. The disrespect shown to the memory of such a beloved character flies in the face of the franchise’s central idea of family. On the reverse, Dominic Toretto and Brian O’Conner, the heroes of the franchise, are characters who made dramatic, 100% illegal choices for the betterment of those they love. So who’s to say?

THE FATE OF THE FURIOUS does little to answer its own paradoxical questions. It provides audiences with a new lens through which to view the franchise. In turn, it also gives us its most frustrating entry to date. Is it an intriguing look at the morality of choice in a complicated world? Or is it just another film in a franchise that has forgotten its central thesis as it becomes more commercialized? Does the redemption of Deckard Shaw betray or support the franchise? Much like Dominic Toretto, you may have to make that choice yourself.