This Year Marks the 40th anniversary since the release of the original STAR WARS film on May 25th, 1977. This month, writers at ComicsVerse will be bringing you our insights on all things STAR WARS as we look at where the series has been and where it will take us next in the galaxy far, far away…

Very few films have had the same cultural impact as STAR WARS. The franchise is responsible for so many iconic images and concepts that still hold special meaning to this day: the Millennium Falcon, the Death Star, Stormtroopers, Jedi, Sith, the Force, and of course, lightsabers.

It has been 40 years since these shiny little laser swords graced the screen, and still lightsaber duels continue to evolve. So, in honor of the saga’s 40th anniversary, let’s take a look back at the history of lightsaber fights, exploring all the ways in which they have changed (for better or worse).

An Awesome (But Awkward) Beginning

STAR WARS has always been a mishmash of different influences: Old Westerns, Fantasy Epics, Classic Mythology, Science-Fiction Serials, and much more. However, the biggest source of inspiration for young George Lucas was the work of the master filmmaker, Akira Kurosawa. The Japanese director is most famous for his work in the Jidaigeki genre: historical dramas set during Japan’s Edo period which frequently focused on Samurai characters.

It’s clear that Kurosawa’s work heavily inspired STAR WARS. The plot of A NEW HOPE bears a striking resemblance to that of Kurosawa’s earlier film, HIDDEN FORTRESS. The iconic costume donned by Darth Vader is in fact modeled after Samurai battle armor. The Jedi and Samurai share several similarities (both are portrayed as wise, honorable warriors with a strict ethical code). Heck, the name “Jedi” is a reference to the “Jidaigeki” genre.

READ: Find out why we think A NEW HOPE is the best STAR WARS film!

Furthermore, the lightsaber is awfully similar to the Samurai’s weapon of choice: the Katana. It’s safe to say that lightsaber duels were originally envisioned as futuristic recreations of Kurosawa’s famous samurai sword fights. For example, this climactic showdown from YOJIMBO:

The scene is fluid, it’s fast, and it’s really, really cool. It was scenes like this that Lucas was hoping to recreate. However, these were the early days of special effects, and this was the first time anyone attempted to do something like this. Filming the first lightsaber duel proved to be a challenging task, and here was the final result:

Though it may have been mind-blowing in 1977, this showdown hasn’t quite stood the test of time. Compared to modern action sequences, this fight seems slow, stilted, and a little bit awkward. This boils down to the limitations of both the special effects and the actors’ abilities; Alec Guinness was 63 at the time, and the actor inside Vader’s costume found his vision greatly hindered by the mask.

However, what this fight lacks in style, it makes up for in substance. The real meat of this scene is the emotional exchange between a regretful master and the student he failed. Think about it. What is it you remember most from this scene? Is it Vader and Kenobi crossing swords, or is it that moment when Obi-Wan sees Luke and decides to make the ultimate sacrifice? This scene demonstrates that the most important element of a good lightsaber fight is not complicated choreography or impressive special effects, it is emotional weight.

The next couple films took lightsaber fights to a whole new level with better effects and improved choreography, while also maintaining a heavy dose of character and emotion. The fight from THE EMPIRE STRIKES BACK is most frequently cited as the greatest duel in the STAR WARS saga, and with good reason.

This is a tense game of cat and mouse as Vader continuously toys with Luke before demonstrating the full extent of his power. Not to mention the dim, fog-filled setting and the minimal, echoing sound design that helps establish an eerie, atmospheric tone. It is a brilliantly crafted sequence and one of the best scenes in cinematic history. Personally, my favorite lightsaber fight would have to be the final showdown in RETURN OF THE JEDI.

Not only is the fighting intense, but the scene has its own emotional arc. At first, Luke is hesitant to fight, but following Vader’s threats, the Jedi embraces his rage. His attacks become primal, and he begins swinging his saber like a mad man. The music swells as he finally overpowers Vader, driving his father to the point of exhaustion. Then, when he is about to strike the killing blow, he is pulled back from the brink. It gives me chills every time.

That brings us to the prequels (*groan*). These incredibly flawed films have a fair share of issues, one of which is their overstuffed lightsaber fights. In the years between RETURN OF THE JEDI and THE PHANTOM MENACE, American cinema had undergone some drastic changes. There had been leaps and bounds in the world of technology, allowing for some significantly improved special effects. Also, action sequences had increased in scale, growing more and more complex. While the prequels’ lightsaber duels boast some impressive visuals and intricate choreography, they had left out the most important ingredient: emotion.

READ: Find out how we’d fix the prequels!

Even the duel at the end of EPISODE I (one of the better fights from this trilogy), is sorely lacking in this department. If it weren’t for John William’s brilliant score guiding your emotions, this duel would feel lifeless and empty. At least the film tries to raise the stakes of this final fight with the death of Qui-Gon Jinn, but it fails to have any real emotional impact.

Remember the fight in RETURN OF THE JEDI? When Luke got angry, we could see it. There was no graceful swordplay, just a man hacking and slashing in a blind fit of rage. We are supposed to believe that Obi-Wan is outraged by the death of his master, but all we are shown is a bunch of complicated stunt work completely void of human emotion. Sure, there is some cool choreography, but all those flips and spins make the fight feel too clean. It makes these combatants seem more like well-programmed robots instead of actual people.

Too Much Of A Good Thing…

Another issue with the prequels’ fight scenes is that Lucas never knows when to stop. It is not enough to see a fight between Anakin and Dooku. ATTACK OF THE CLONES also had to have Yoda hop around like a frog with ADHD. Or how about when REVENGE OF THE SITH felt the need to cram in a fight between Obi-Wan and a four-armed robot? These moments are not necessary to the plot, and there is no compelling reason for us to be invested in the action. These scenes do nothing except demonstrate some impressive special effects.

The final fight between Obi-Wan and Anakin in REVENGE OF THE SITH is considered by many to be one of the best parts of the prequel trilogy. I have to admit that I like this sequence… up to a point. Unlike most of the prequels’ fights, this duel has some depth to it. Here we see two old friends on separate sides of a galactic conflict, facing off for the very first time. For me, the turning point occurs right after the duo makes their way along a narrow catwalk as volcanic eruptions explode behind them. 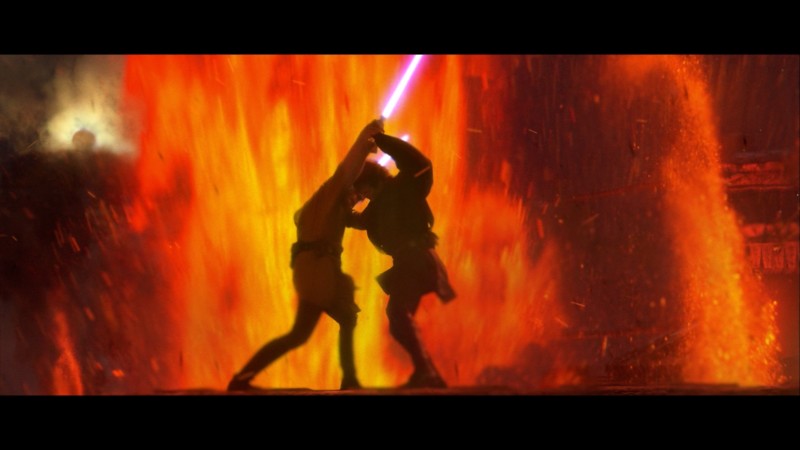 This sequence offers some powerful imagery and it is at this moment that the fight should have ended, but it just keeps going. The audience is subjected to another few minutes of the pair swinging from cables and riding on platforms down a river of lava before Anakin is finally bested when Obi-Wan manages to stand a little higher on the slope of a small hill.

In a way, this anticlimactic outcome reminds me of Qui-Gon’s death scene. After seeing the legendary warrior go toe-to-toe with Darth Maul — flipping, jumping and dodging several attacks — it is an elbow to the face that finally undoes the Jedi Master. The prequel fights show characters doing some unbelievable things, which causes two problems. First off, it’s hard to get invested when your heroes have superhuman abilities and can do just about anything. Secondly, it is underwhelming to see them defeated in such a mundane way.

Now we are in the midst of an all-new trilogy, and so far, the filmmakers seem to understand what it is that makes lightsaber fights so special. The battle at the end of THE FORCE AWAKENS is undoubtedly fantastic. It is one of the single best duels in the entire series. Gone is the overly complicated choreography. Once again, these characters feel like living, breathing, human beings.

There is an emotional core at the heart of this fight. Rey is upset about the recent death of her new father figure, and this is visible in the scene. Furthermore, the whole film has been building up to this moment. We met Rey as a person with big dreams on a desolate world. A person searching for a purpose. When she finally grabs that lightsaber, she accepts her calling. Here, we are invested. We care about the outcome. We want Rey to succeed.

The Future of STAR WARS

STAR WARS is a cornerstone of American pop-culture. It has inspired countless blockbusters in the years since its initial release. Though the franchise has had its weak points, I believe we are currently in the midst of an exciting new era. A new generation of filmmakers is taking the helm of the series that spurred their imaginations and captured their hearts and minds.

READ: Find out why ROGUE ONE raises the stakes!

While it is still early on in this recently revived franchise, I have hope that THE LAST JEDI will build upon this blueprint. I have hope that we will continue to see fantastic new entries in the STAR WARS saga. Films filled with lightsaber fights that are both thrilling and emotionally satisfying. Films that remind us of why we fell in love with this series in the first place.