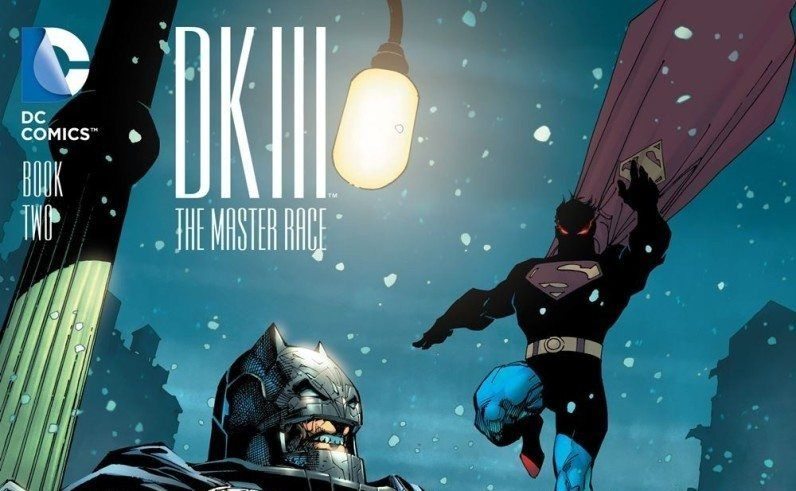 Frank Miller, as a creator, has always been provocative, and THE DARK KNIGHT III is no exception. As stated in my last review of issue one, the prolific writer has been adamant about co-writer, Brian Azzarello, being the sole voice behind the plot. The second issue of the mini-series makes that claim questionable though as the tone of THE DARK KNIGHT III: THE MASTER RACE begins to mirror Miller’s graphic novel, HOLY TERROR! Do Miller’s political views take away from the story DC is trying to tell? Is Eduardo Risso a successful follow-up to Miller in the second accompanying mini-comic? Let’s get right in and find out!

When THE DARK KNIGHT III was originally announced, the accompanying title was lauded by many. THE DARK KNIGHT III: THE MASTER RACE, while eye-catching, seemed to be in poor taste following the number of black men killed by white cops throughout 2014 and 2015. While the original Dark Knight was a critically-acclaimed commentary on the socio-political problems happening throughout the 80s in America, the response to THE DARK KNIGHT III was an unwelcome one. In the wake of ALL-STAR BATMAN AND ROBIN and HOLY TERROR!, the public opinion of Frank Miller shifted from comic’s wunderkind to misogynistic and Islamophobic bigot. The name of the series turned a lot of people off, but the creative team didn’t let that stop them. THE DARK KNIGHT III: THE MASTER RACE #2 continues the series’ unique take on the Dark Knight by taking the spotlight off the Bat and pointing it in the direction of the Kandorians. 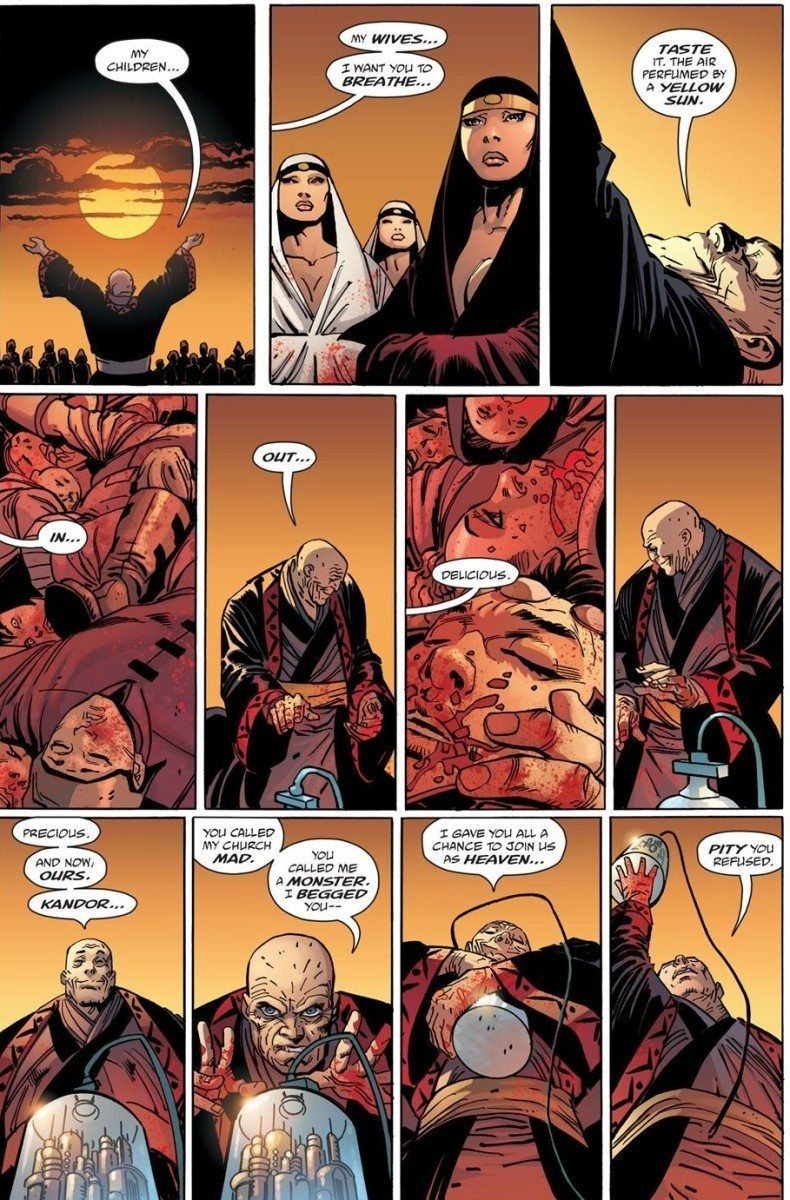 After last issue’s look at police brutality in Gotham, this issue took a focus on one of America’s, or even the whole world’s, biggest problems, racism. The Master Race, as I expected them to be, are the Kandorians, Kryptonians trapped in a glass bottle by Brainiac for decades. After Lara and Baal help the Atom to achieve the resizing of Kandor, Atom says one of the most striking lines I’ve read in a mainstream superhero title. “It’s not until the flash that the irony hits me, like a dream, thirty years forgotten. The Button. The End.” Like the Manhattan Project, Dr. Palmer is releasing unto the world an unknown element, a new population of super-powered Kryptonians.

It’s commented on in the issue that Clark may be Kryptonian in blood but at heart, Superman is a human whereas his daughter, Lara, depicts herself as a full Kryptonian. She doesn’t care about the human race, she cannot relate to them, nor can she relate to her own mother, the queen of the Amazons. Her desire to find companionship and Palmer’s compassion are what allows the new Kryptonians to manipulate their way onto Earth. Littered among the Kryptonians that begin to grow from Kandor are dozens of bodies along the desert floor. Quar, the leader of a rogue Kandorian church, introduces himself and admits his plan to conquer the earth. Dr. Palmer, in tears, is irreversibly shrunk before being stomped on by Baal, an implication of his death.

WATCH: Our interview with the DK III creative team at NYCC 2015!

Before returning to the Kandorian uprising, I’d like to address the return of Bruce Wayne in this issue. While it was a final page revelation and a very exciting one, I found the lead up to his reveal to be rather uneventful. After twenty-seven days in prison, Carrie Kelly admits to the fate of Bruce Wayne. The beating that Lex Luthor dealt him at the end of THE DARK KNIGHT STRIKES BACK broke the Bat and after three years, he never recovered. His fear of dying alone overcome with Carrie by his side as he passes. And yet, the emotional tale of a broken man is a lie.

During her transfer to Blackgate prison, Carrie returns to the disjointed, militant-style of monologue that was present in DK II and it is as unenjoyable now as it was then. Fortunately, being captured was all part of her plan as she calls the Bat-Tank to free her and returns to the Batcave for Bruce’s introduction into the series. I felt like this just wasn’t a necessity narrative choice for the series. The most recurring line so far has been “Bruce Wayne is dead!” and that’s true. Bruce Wayne has died, and all that remains is Batman. It didn’t need a jailbreak that took up a third of the issue to tell me that, but that’s just my opinion. 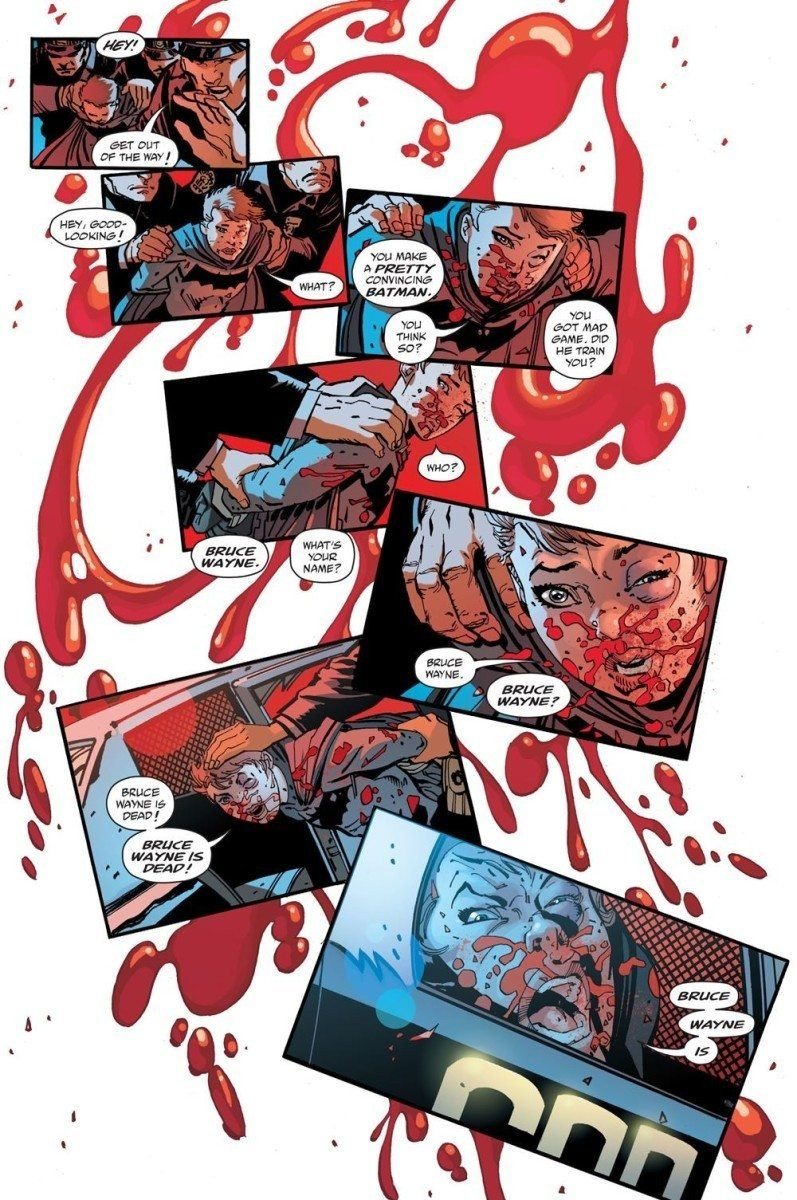 Back to the Kandorians! What most people are going to take from this issue is that the evil prophet-following Kandorians are a metaphor for ISIS and the crisis going on in Syria. Quar and his followers are the militants, and the broken, bloody bodies of the non-believing Kandorians are the citizens caught in the cross-fire of the radical group. The look in the Atom’s face as he watches their arrival, the tears on his face after he set off this generation’s atom bomb can signify many things.

Through the perspective that the Kandorians are ISIS, it can be claimed that the Atom and his subsequent “death” at the hands of his creation is akin to the relationship between America and ISIS. The presence of America throughout the Middle East after 9/11 and the Iraq War, and the violence that came with them, gave way to the creation of ISIS. Their depiction as murderous Kryptonians could be seen as something to fear; an unstoppable force that stands to break down everything that Americans stand for. The Atom, a protector, let them out of the bottle and into this world and was killed. If our protectors can’t save themselves from the Master Race, who will protect us? As I stated, this is merely a single perspective on this comic.

READ: Want more BATMAN? Take a look at the villains of GOTHAM!

Reading this comic, I didn’t share that view. Having a response like that, you’re not paying attention to the world around you. You’re not playing detective. You’re not reading this like it’s a Dark Knight story. It’s too easy to throw this series aside and say “Frank Miller’s once again telling us that Muslims are “bad” and Americans need to react or die”. Readers, the Master Race is all about perspective. I ask you to take a look at the Kryptonians. Look at their white skin, look at the way Quar’s followers look at him adoringly, look at the bodies on the ground. This a group of people led by one man who holds power over others and who lack the morals not to exert those powers on other people.

The Kandorians did not remind me of ISIS but of radical groups like the Nazis. In fact, and this scares me the most, Quar reminded me of Donald Trump- a single man taking advantage of all of the bottled up fears and anxiety of a group of people and using it to take power. Superman may understand and appreciate humanity, but Lara and the Kandorians do not. They seek to reclaim the former glory of the Kryptonian Empire and do not care who they have to hurt to achieve that – the classic “American way”. This is just my opinion on the topic, and again, every person will have their perspective on the Master Race. If you agree or disagree with me, let me know in the comments, send me an email, or call me out on Twitter. I’d love to see other opinions on this issue!

With the art, Andy Kubert and Klaus Janson continue to capture my attention and bring back pleasant memories of my first reading of THE DARK KNIGHT RETURNS. Kubert’s art has achieved a new level of greatness with Janson on inks. For me, I always felt that Kubert’s style was best for action sequences, and that’s one of the reasons I was initially skeptical of the choice. With Janson’s inks, he breathes new life into Kubert’s passive panels with Carrie’s haunting smiles from the interrogation to Atom’s tears standing out as some of my favorite moments from this issue.

Eduardo Risso was the perfect follow up choice to Miller’s art in the second mini-comic in this series. His minimalist style led to some of the best character development we’ve seen in the Dark Knight Universe that doesn’t feature Batman. His depiction of the confrontation between Lara and Wonder Woman didn’t need the dialogue or the word boxes. Wonder Woman’s frustration at her daughter’s believed superiority and Lara’s lack of respect for her mother was accurate in the way their bodies reacted to each word, yet there was no need for words, Risso told his story in the character’s eyes. 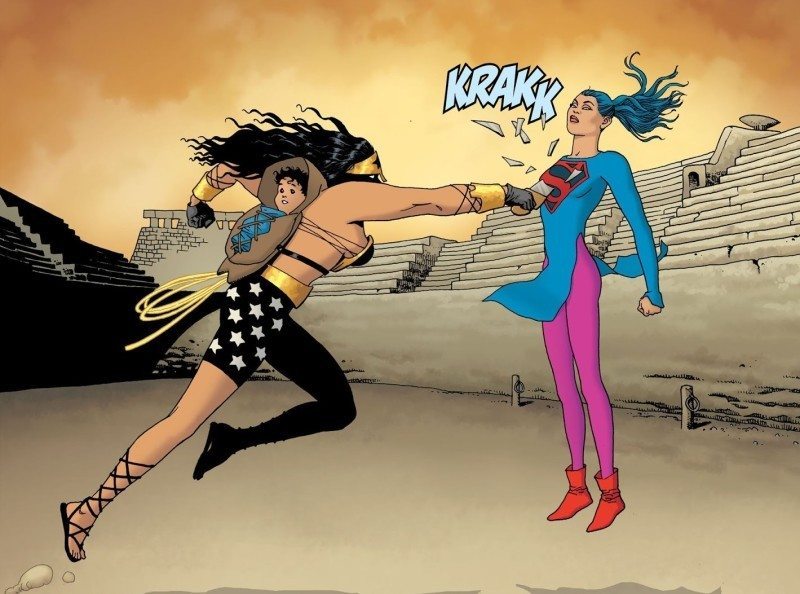 DK III: THE MASTER RACE is still not for everyone. I understand many fans are still bitter that the comic is not written and drawn solely by Frank Miller. After the second issue, I feel a lot more comfortable with Azzarello and Kubert behind the wheel. The series is beginning to read like a modern sequel, and the stakes are beyond high. What will the Kandorians first step be? What will Batman’s be? Who knows, but I sure as hell want to find out.

My one recommendation for this series is not to read it in the individual issue format. After picking this week’s issue up digitally, I found the mini comic to be more enjoyable of a read in full-sized pages at the end of the issue. The mini-comic in the middle makes the comic feel stiff and disrupts the narrative flow of the issue. For the next issue, I’d just bag and board your physical copy and read it digitally or wait for the hardcover bound copy of the issue. That’s all for this month with DK III everyone, and I’ll see you all in the New Year with issue 3!