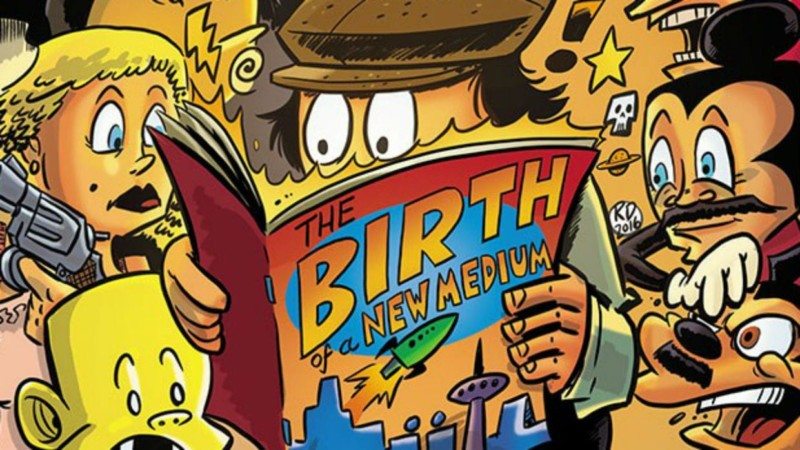 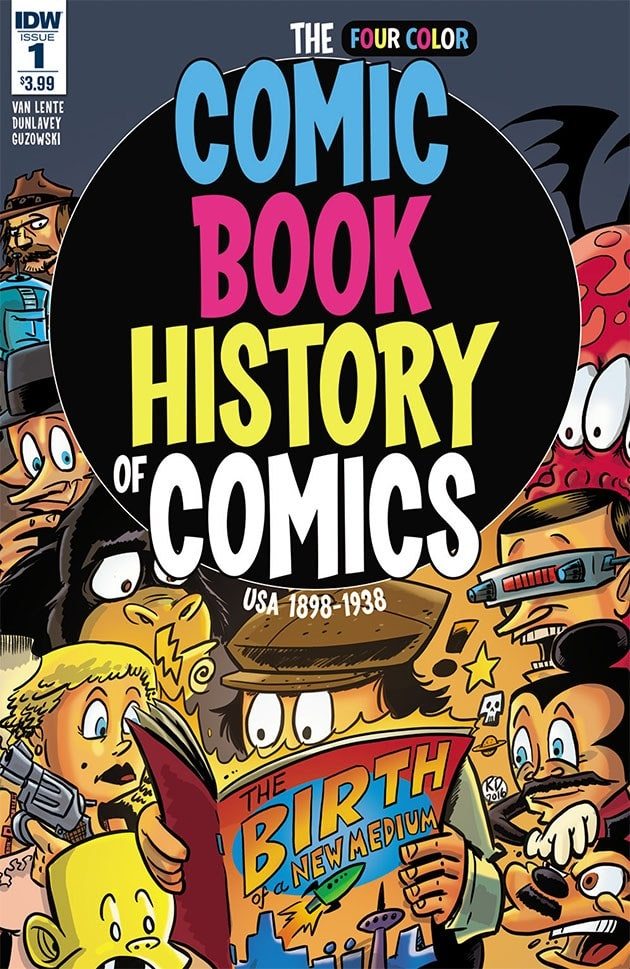 THE COMIC BOOK HISTORY OF COMICS is a re-release of the six-issue series by Fred Van Lente and Ryan Dunlavey, with updated information and color. Issue #1 covers 1898-1938, starting with how the visual layout of comics developed. The focus then shifts to the battle between newspaper magnates William Randolph Hearst and Joseph Pulitzer for control of comics and the achievements of individual creators. The issue ends with a chronicle of Walt Disney and Max Fleischer’s struggle to dominate animation.

The original COMIC BOOK HISTORY OF COMICS is difficult to improve on in terms of content. Van Lente’s writing achieves a balance between educating and entertaining the reader. Although there’s nothing particularly groundbreaking about Dunlavey’s illustrative style, his art is effective.  The images are easy to read and sometimes funny, which is imperative for a non-fictional comic. Admittedly, any historical account can be a little dry if it isn’t told in an engaging way. Dunlavey’s cartoons compliment Van Lente’s writing perfectly, turning historical figures into interesting and dynamic characters.

LISTEN: Are you a history buff? Listen to our podcast on THE CARTOON HISTORY OF THE UNIVERSE!

Van Lente’s argument that comics are distinguished from other forms of art through their combination of successive images and dialogue forms the ideological cornerstone of issue #1. Like any medium of art, the line between comics and other mediums is not always perfectly clear. Just like a piece of art could contain elements of both painting and sculpture, a piece of art could also contain elements of comics and another medium. In Van Lente’s history of comics, he presents animation as a combination of comics and film. Van Lente’s definition of comics allows him to not only pinpoint THE YELLOW KID as the first comic, but to blur the line between comics and animation.

Although the choice to include early animation as part of the history of comics might seem careless, it’s entirely necessary. It would be difficult to tell the history of one without the other, given how stylistically and thematically intertwined the two mediums are. Van Lente’s inclusion of animation into this history is just one example of the extensive context that is provided in this work. It would be much simpler to talk about how comics have evolved over time, as if they existed in a vacuum. However, Van Lente ambitiously contextualizes the history of comics to include its cultural influences so the reader can fully understand this history. 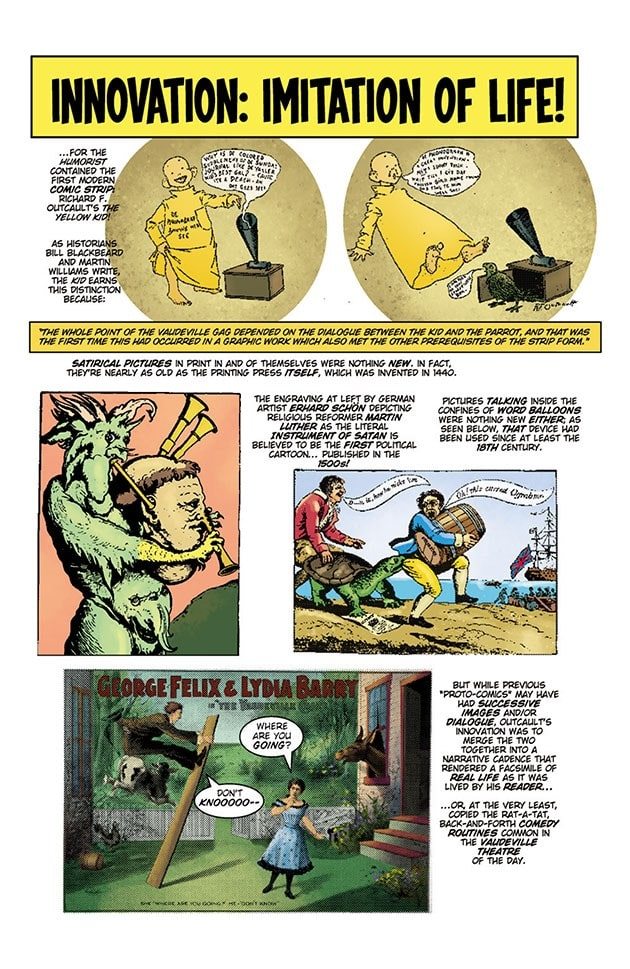 READ: Hey IDW fans! Read our review of the first issue of PROWLER!

The most noticeable differences between the original series and the re-release are the colors by Adam Guzowski, and the section on female comic creators. The re-release runs into a wall here, since neither of these additions improve on the overall content of the series.

I want to make it clear for those unfamiliar with his work that Adam Guzowski is an excellent colorist. However, I can’t help but feel like there’s something disjointed about Dunlavey’s images and Guzowki’s coloring. I have to acknowledge that I might feel this way partially because I know the colors are a new addition to the original art. However, it’s also possible that while Dunlavey created the art for this comic, he kept in mind that the comic would not be printed in color. It is likely that he illustrated in a way that made color completely unnecessary. Either way, I can’t say that the colors add anything substantive to THE COMIC BOOK HISTORY OF COMICS. The coloring isn’t bad. It just doesn’t necessarily make the re-release an instant improvement from the black and white original. 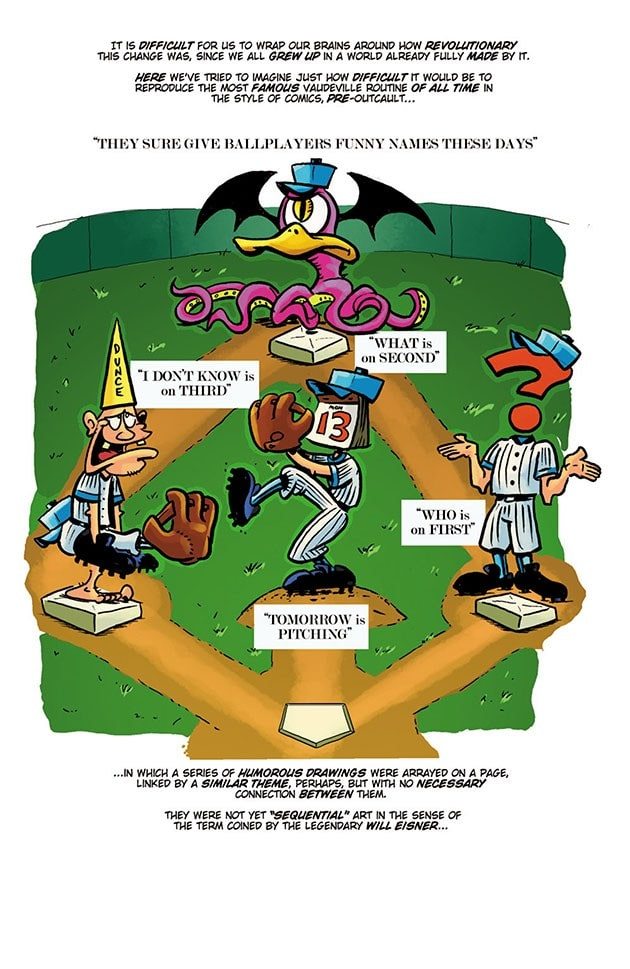 READ: Want to learn more about the history of comics? Read our article on Jack Kirby!

Like most Western historical accounts, the original COMIC BOOK HISTORY OF COMICS is noticeably white and male in its focus. The addition of a “herstory” section in the re-release was intended to remedy the original’s lack of female representation. However, tacking a single page on the end of the issue about a female creator is not the best way to achieve inclusivity. Like all fields, women have been historically less notable in the arts due to cultural circumstances that barred them from the same freedom and opportunity as men. Instead of cherry-picking examples of female creators, it may have been more meaningful to have a discussion as to why it was so difficult for women to achieve notoriety as creators of comics.

The “herstory” portion of issue #1 focuses on Nell Brinkley, “the Queen of the Comics.” This could have easily been integrated into the section about William Randolph Hearst and Joseph Pulitzer poaching comic artists from different newspapers. It would have been much more meaningful to include her in this narrative, as opposed to presenting her as an afterthought in the “herstory” section. Van Lente’s attempt to diversify this historical account does not go unappreciated, and I understand that fully integrating her into the overall narrative would have meant reworking the entire format of the issue. Still, the inclusion of a female creator just feels superficial, especially knowing Van Lente successfully integrated multiple histories into a single narrative to create THE COMIC BOOK HISTORY OF COMICS.

Although the updated version doesn’t add much in terms of real content to the original series, THE COMIC BOOK HISTORY OF COMICS still holds up. Van Lente’s historical account of a much loved medium is well-researched and approachable, with a healthy dose of humor. His writing coupled with Dunlavey’s illustrations creates an informative and approachable history that should be considered essential reading for anyone with more than a passing interest in comics or art history. As comics continue to evolve, it’s important to understand both where comics came from and how the medium has always responded to the greater cultural forces surrounding it. The re-released version is worth picking up, for both those who have and have not read the original version.