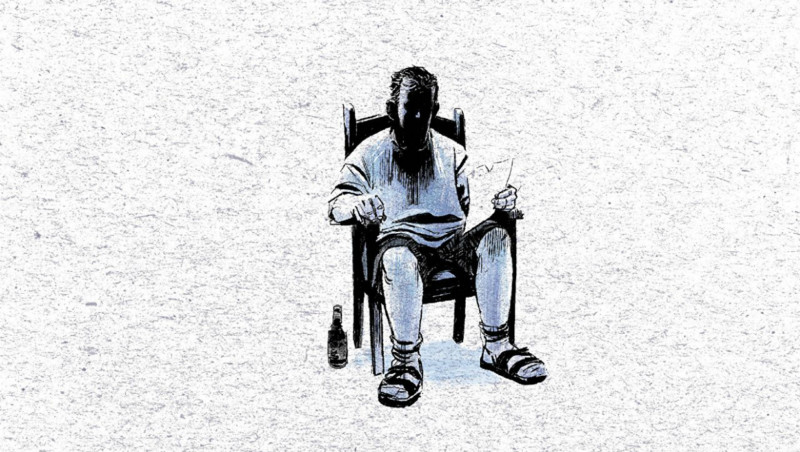 I’ve always been a sucker for time travel stories. I’ve seen it across all genres, from Stephen King’s historical thriller 11/22/63 to the science fiction action movie LOOPER. When executed well, stories about time travel reveal the darkest, most complicated parts of humanity. As sentient creatures who can remember the past and postulate about the future, we’re often stuck. Half the time we dream about changing the past or securing the future. Because many other animals live in the moment, the time machine is a particularly human concept. An acclaimed comic that is now a re-release, THE BUNKER VOL. 1, explores what it means to be a person confronted with your history and your legacy all at once.

THE BUNKER VOL. 1 is a collection of the first four issues of the ongoing series, THE BUNKER. We begin our journey with the five main characters: Grady, Heidi, Natasha, Daniel, and Billy. In fact, my only qualm with the series stems from the first issue. In this chapter, it’s a little hard to follow with several characters that look very similar. However, as the series progresses and focuses more on the individuals, this problem subsides.

READ: Interested in more time travel? Check out our Top Sci-Fi Comics of 2016!

These friends are on their way to bury a time capsule when they come across a metal bunker. Somehow, it has all of their names on it. What waits for them inside the bunker sets our story in motion. There are letters to all five friends… from their future selves.

Together, the letters tell the story of a future apocalypse that our main characters themselves are destined to cause. Even more troubling, their future selves want them to cause it, for the good of humanity. The letters also reveal personal secrets, relationship troubles, and eerie prophecies particular to each person. Needless to say, the present day friends are shaken to their core. It’s just the beginning of a tension-filled, dangerous ride towards a future they’re not sure they can escape.

So often in the apocalypse genre, the plot focuses on the end of the world and forgets its characters. It’s understandable — I mean, the whole planet is dying off. THE BUNKER has an advantage, however. It takes place many years before the tragic events of the future. This means it can really focus on the individuals who will eventually play a bigger role. Writer Joshua Hale Fialkov crafts an exceptional balance between the greater story arc and each character’s personal journey.

THE BUNKER #3, in particular, gives us remarkable insight into Heidi, one of the most nuanced and strongest characters. Her letter reminds her that her uncle was sexually abusive towards her as a child. Heidi had deeply repressed this part of her childhood, due to the trauma. But now that the letter brings the memories to the surface, she has to face her own complicated truth. Her letter also gave Heidi the address and phone number of her abuser, offering a chance for revenge.

At the same time, Grady receives a newspaper from the future with the location and time of an attack in San Francisco. In turn, he grapples with questions that few of us have ever truly faced. In fact, all of the characters do, in their own ways. Do the needs of the many outweigh the needs of the few?  Should we really be playing God, warping time and space in order to pursue our own desires? And can you even change the future?

Unique Artwork for a Unique Story

THE BUNKER has no black and white answers. It explores the gray areas between right and wrong and past and future, paired terms that we often see as autonomous. Because it is so skillfully crafted, the art and writing work together beautifully. In some ways, the connection is clear. For example, as you can see in the images above, Joe Infurnari’s gorgeous artwork gives the reader a sense of unease. The gritty, almost scratchy quality evokes a feeling of urgency and anxiety. Even the slow moments feel restless. This fits perfectly with the comic’s mystery-thriller vibe.

READ: Want to check out another indie comic that’s a bit dark? Check out our review of REGRESSION #1!

But subtly, the art of THE BUNKER works well too. For example, Infurnari often draws the focus of the scene clearly while blurring out the rest. This adds a striking amount of reality to a rather unrealistic premise. In our everyday lives, we don’t take in every detail of a moment. Instead, we focus on what’s important. Or rather, what’s important to us. The artist also uses eerie colors throughout. Many of the scenes consist of a monochrome scheme, and dark, haunting colors.

When all of the aforementioned skills are together, it creates an experience that’s a healthy mix between surreal and real. This blend is a direct reflection of the characters themselves. They, too are caught between a potential future and a certain present.

Not every comic gets the opportunity to be released again. But THE BUNKER VOL. 1 is a great start to a strong series. Its unique artwork, realistic dialogue, and unconventional plot make this series a benchmark for comic quality. There’s no wonder that Oni Press choose this as a contender. While focusing on action and mystery, THE BUNKER also brings up philosophical quandaries and personal dilemmas that many other comics are afraid to touch. These issues are another addition to the worn-out trope of time-travel science fiction, yet they offer something new and confident in every way. This volume also ends on a cliffhanger, making you wish you’d already bought the next installment.

New readers and old fans should pick up THE BUNKER VOL. 1, SQUARE ONE EDITION when it releases on October 24th, 2017.