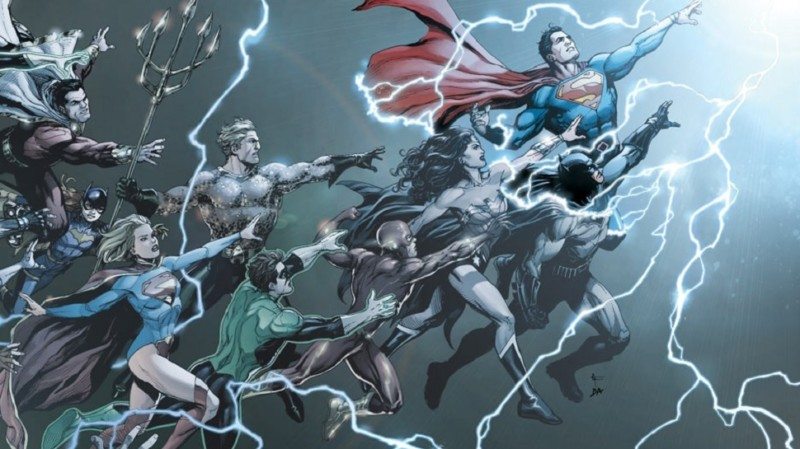 Discussing the top five comics DC had to offer in 2016 was relatively easy, but it was much more competitive for DC’s honorable mentions. The talent that’s working or worked on those five books is undeniable, which you can read more about here. However, the ComicsVerse staff couldn’t ignore the other books that have been recently published or highlight lesser-known characters. These books displayed important themes, creative storylines, and encapsulating art as well! Take a look at we consider DC’s honorable mentions for 2016 below:

#5). RED HOOD AND THE OUTLAWS (Released August 2016-Ongoing): Red Hood and his band of misfits are back at it again! Scott Lobdell once again takes us on a lively adventure with Jason Todd and his lovable Outlaws. With new members, Artemis and Bizarro, this trio will take on one of Gotham’s most notorious villains, Black Mask. Can these antiheroes stop this madman without killing each other first? Officially launched in July 2016, RED HOOD AND THE OUTLAWS easily earns an honorable mention as one of DC’s best comics this year. Funny, exciting, and even touching at times, this series takes misunderstood C-list characters and makes them bigger than life. In only four issues, Scott Lobdell has made each character uniquely sympathetic and approachable in the most unusual ways. Coupling witty dialogue with strong art and panels makes RHATO an absolute must read. (By Sable Gravesandy)

#4). TRINITY (Released September 2016-Ongoing): Superman, Batman, and Wonder Woman have teamed up before. However, TRINITY is unique as writer Francis Manapul explores the profound emotions felt by the iconic trio. As they fall into Poison Ivy’s trap, Superman, Batman, and Wonder Woman are suddenly thrown into their respective pasts. Consequently, they’re tempted to find the answers they’ve been searching for their entire lives. Released in September 2016 as a monthly series, TRINITY focuses on a different superhero in each issue, which is why the artwork of the different artists (Francis Manapul for TRINITY #1 &2, Clay Mann for TRINITY #3, and Emanuela Lupacchino for TRINITY #4) perfectly align with the plot. Despite being low in action, TRINITY is a remarkable series for its in-depth character analysis of DC’s legendary superheroes. (By Anika Hossain)

#3). THE FLASH (Released June 2016-Ongoing): Joshua Williamson’s take on THE FLASH has reinvigorated the character for the DC REBIRTH era. Barry Allen’s new adventures jump-started with his emotional reunion with the original Wally West in the DC UNIVERSE: REBIRTH special. From there the fascinating mystery surrounding Wally’s disappearance set Barry on a mission to discover the truth, a quest which granted insight into Barry’s often underexplored skills as a forensics scientist. This glimpse into Barry’s life outside the costume segued perfectly into the series’ first major arc, “Lightning Strikes Twice,” in which hundreds of people throughout Central City were suddenly granted Flash’s Speed Force powers. This event immediately shook things up in Barry’s world, as his status quo as Central City’s sole savior was challenged and his relevance was suddenly called into question.

Adding intrigue was a romantic relationship with a fellow scientist who’d also been granted speed powers, the younger NEW 52 Wally West’s promotion to Kid Flash, and the gut-wrenching transformation of Barry’s best friend August into the supervillain Godspeed, who sought to murder the other new speedsters and steal their powers. These developments made for a complex storyline, which explored every facet of Barry’s life, inside and outside the costume. The writing lent new depth to the inner lives of Barry, Wally, August, and Iris West. Unfortunately, the writing has since dipped with the more two-dimensional “Speed of Darkness,” story arc, but it doesn’t change the power and relevance of those first nine issues.

Special mention must also be made of Carmine Di Giandomenico’s art, which practically sizzled through the pages. He imbued his characters with a palpable energy that surged throughout the action like bolts of lightning. Indeed Giandomenico’s art came to define THE FLASH, creating a look that truly takes after the name. Williamson’s riveting storytelling and Giandomenico’s electric art have succeeded in redefining the Flash for this new era of the DC Universe. (By Aaron Berke)

#2): BATGIRL (Released July 2016-Ongoing): Babs is back in action! After deciding to take some time away from Burnside and being Batgirl, Barbara starts on a journey through Asia, but like any hero, she can’t hang up the cape for long. Writer Hope Larson introduces us to phenomenal new characters that drag her back into action, including an old friend, a mysterious teacher, and sympathetic enemies. Even among these fresh faces, it’s Batgirl who shines the brightest. Larson does an excellent job of portraying the fun, quirky genius that is Barbara Gordon alongside the butt-kicking Batgirl. Rafael Albuquerque’s art fits perfectly with the upbeat, exciting story. With a creative team like this, I can’t wait to see what happens next! (By Sam Sobel)

#1): ALL-STAR BATMAN (Released August 2016-Ongoing): The legendary duo of Scott Snyder and John Romita Jr. bring us a fresh look at Gotham City’s Batman in ALL-STAR BATMAN. In this 2016 run, we get a reimagining of some of Batman’s greatest villains as well as a nice intro to his world. It’s expertly designed for anyone who hasn’t already been a long-time fan. Romita’s art is something to highlight, due to the great level of action Snyder gives him to work with. The inclusion of villains like Two-Face and Firefly are of course a perfect touch, mainly due to the fact that Snyder’s writing for them is masterful. Combine this with Romita’s amazing art for said characters and you have a great piece of storytelling. Though we list it as an honorable mention, ALL-STAR BATMAN is a series that anyone and everyone should check out since we’ll definitely see more amazing twists to classic characters in the coming issues. (By Brandon Guerrero)

These DC honorable mentions were decided in the same way when we were discussing the top five, so the ranking is based on the number and value of the voting. DC had such a great year we felt other books needed to be added to the conversation, so here some more books we think are still worthy of checking out!

GREEN ARROW (Released June 2016-Ongoing ) Benjamin Percy and Otto Schmidt’s take on GREEN ARROW has been a delightful revamp for the character. Within two issues, Oliver Queen was left for dead, stripped of his money and titles, and forced on the run along with long lost love, Black Canary (Dinah Lance). The first 12 issues have been about Oliver reclaiming his legacy, bringing to justice those whole stole it from him, and reacquainting himself with the people who matter. In short, it’s the quintessential DC REBIRTH formula, told in the uniquely self-reflective voice of Green Arrow. (By Aaron Berke)

NIGHTWING (Released July 2016-Ongoing): Writer Tim Seeley has successfully brought Dick Grayson to new heights by bringing back his traditional black and blue outfit and returning him to Blüdhaven. Along with a return to form, Seeley also provides Nightwing with an all-new rogues gallery. It’s certainly a good time to be a Nightwing fan! (By Fabio Casablanco)

TITANS (Released July 2016-Ongoing): This book has to be on the list simply for getting Wally West back into the fold along with the REBIRTH issue. The main creative team is Dan Abnett and Brett Booth. (ComicsVerse)

DC Content Editor Picks: I’m sure you noticed we were REBIRTH heavy. Well, I’d like to preach about books that came before the shift of creative teams and the massive reimaging. There are books that originally got published in 2015, but finished in 2016. One such short series, SUPERMAN: AMERICAN ALIEN even got into our top five. First, the MARTIAN MANHUNTER series deserves some sort of acknowledgment. Like TITANS it brought to the forefront a vital DC character. The plot on the surface seems silly, but the overall exploration of J’onn J’onzz mental being is phenomenal. Hopefully, he gets put into another book. DOCTOR FATE also had explanatory characterization. It blended diversity and the original character fantastically. Finally, OMEGA MEN gets a nod. Tom King can do no wrong at this point.