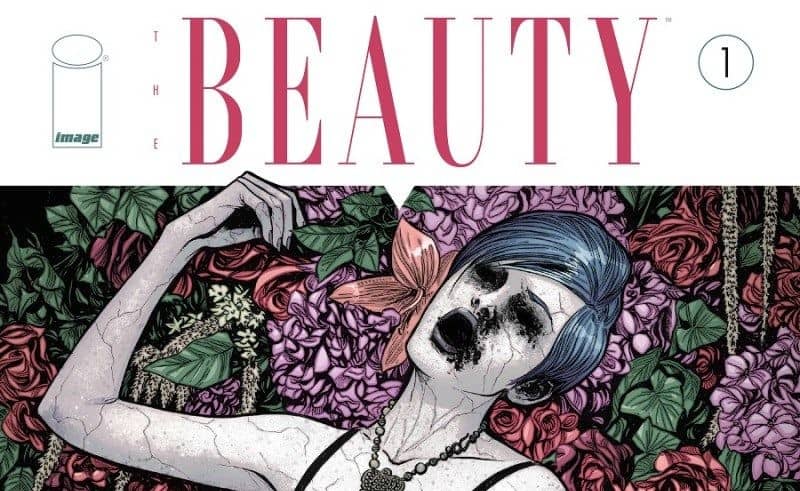 THE BEAUTY #1 is a classic example of a book coming out of nowhere with a wild premise, generating interest from publishers and readers alike, only to deliver a mediocre reading experience that fails to meet expectations.

Well, “out of nowhere” is perhaps the wrong phrase to describe THE BEAUTY. The book first came to the attention of most readers in 2011 when it won that year’s iteration of Top Cow’s Pilot Season initiative. Series creators Jeremy Haun and Jason A. Hurley would, however, move on to other projects, leaving their winning creation in limbo for the next four years.

Even after such a huge gap between pilot and series, it is easy to see how this book still captures the awareness of readers. That wild premise I mentioned before involves an STD known as “the beauty,” a disease that essentially makes the infected more attractive. That’s right, good looks as an STD. As the book’s narration describes, half the world has this disease and the other half hates them for having it. Some in opposition teach against pursuing a disease intentionally, while others stage acts of violence against the disease’s carriers.

The only known catch to “the beauty” is a slight and constant fever. Sounds like a nice trade-off, right? You might think so until an infected woman spontaneously erupts into flames on a train. So far this is all fascinating to me, but only makes up the first few pages of this issue. What follows is a run-of-the-mill cop drama with only mild splashes of sex, action, and weirdness. Sadly, none of those elements are strong enough to elevate THE BEAUTY to a level of distinction needed to help it stand out in the field of creator-owned comics.

READ: OUR THOUGHTS ON ODY-C, A MUCH STRONGER OFFERING FROM IMAGE COMICS.

The following paragraph contains spoilers. You have been warned!

While the titular disease does directly affect the lives of the lead characters — whose names I cannot recall without looking at the book again because they are barely mentioned — any intended emotional impact is hampered by a lack of background or development. After putting this issue down I do not feel like I know these characters, only that the lead female cop has been living with the beauty and the lead male cop has apparently contracted it from his wife. After discovering the disease may be fatal, I should feel concerned about the well-being of these protagonists and compelled to pick up the next issue. I feel neither of those things.

Jeremy Haun’s art fails to make up for the plot’s shortcomings. Don’t be fooled by the eye-catching cover; nothing about the interior art is half as beautiful or interesting as that cover piece. While certainly far from ‘bad’, the art is at best mediocre.

At the end of the day, THE BEAUTY #1 is a striking concept that fails to inspire with its lackluster delivery. Fans of quirky police dramas may be tempted to grab this issue, but I expect many will be let down by the lack of plot and meaningful character development. I would suggest waiting for the trade paperback, as the possibility exists that the book is taking the slow-burn approach with its storytelling, meaning something of interest may yet happen in a later issue.

Let this stand as an example to would-be writers that a unique premise alone is not enough to sustain a reader’s interest in your book.