THE AMAZING SPIDER-MAN #19 is an issue about choices, consequences, and heartbreak. It’s the final chapter in the New U arc before CLONE CONSPIRACY, adding more layers to the Jackal’s plan while placing Peter Parker in a morally ambiguous situation. Even when putting his problems aside to help those he cares about, Peter still finds himself wracked with guilt, striving to do the right thing despite full awareness of the consequences. Even with a few instances of splotchy artwork here and there, the overall story is worth the read, closing on a tragic scene that will definitely have major repercussions for Spider-Man and those around him. 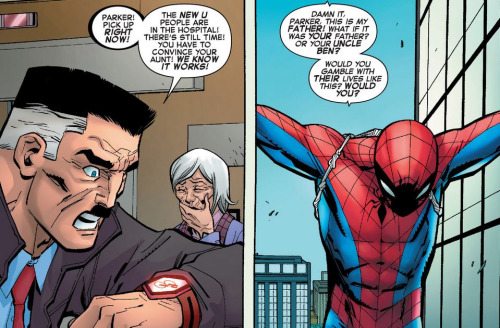 The Jackal’s mysterious plan has been set into motion, reanimating the dead without any defects or flaws they might have had while alive. More importantly, he and the New U organization have now gained the loyalty of multiple characters, including J. Jonah Jameson, ensuring compliance by  reuniting them with formally deceased loved ones. Now New U offers their aid to Jonah’s father Jay, who is sick in the hospital and possibly on the verge of death, a treatment that Peter Parker heavily discourages under the guise that this treatment is still too experimental. Unable to express the real reason behind his distrust (his spider-sense telling him that something is amiss), Peter now struggles to find a solution to help his family, before it’s too late.

READ: The wall-crawler and the merc with a mouth team up once again in SPIDER-MAN AND DEADPOOL #9!

This is definitely one of those issues where you truly feel for Peter Parker, a character whose life is constantly being defined by tragedy. This is a character who has lost so many people close to him, who gets vilified even when he tries to do the right thing, and who always feels down on his luck even when he saves the day. Here we see that old Parker misfortune once again, as Peter finds himself between a rock and a hard place on what he should do: have Jay Jameson accept the New U treatment and be subjected to something insidious, or accept the establishment treatment and run the risk of Jay dying. It’s one of those moments where you really feel the weight of keeping a secret identity, unable to confide in those you love and thus running the risk of coming off as uncaring. With the decisions Peter makes in this issue, he’ll be forced to deal with the fallout of them and how they’ll affect the state of Peter’s relationships with those he cares about the most.

Furthermore, this issue brings the Jackal’s still-questionable master plan into the lives of both Spider-Man and Peter Parker, making the upcoming storyline all the more personal. Over the past year in THE AMAZING SPIDER-MAN’s run, we’ve seen the Jackal gain more and more followers, each devoted to his un-disclaimed cause and the miracles he’s performed. Now, with Jolly Jonah on his side, and the details added in the bonus story DEAD NO MORE: THE CLONE CONSPIRACY, more and more pieces are beginning to fall into place. We see how much these characters care for those they love and fear losing as well as just how far they’re willing go to in order to maintain these relationships, no matter the cost. Compared to the other threats Spider-Man has faced; this is a very human dilemma, one that lacks a straightforward answer in terms of reaching a solution.

After taking a small break, Giuseppe Camuncoli returns to heading the artwork for THE AMAZING SPIDER-MAN and while J.B. Silvia did a fine stand-in job, it’s good to have Camuncoli back. From Jameson’s cheekbones to Peter’s five o’clock shadow to the darkening of Spidey’s outfit when things seem grim, the character designs and facial imagery are as lively and detailed as ever. The action also has a sense of fluidity and depth to it, focusing on Spidey helping average NY citizens, instead of fighting supervillains, in order to emphasize the human feel of the issue. Granted there are one or two panels that don’t hold up in comparison to the rest, with some facial models coming across as awkwardly compressed and squinty. It doesn’t ruin the issue, but the fact that the rest of the comic looks so great only heightens the salience of these few mistakes in the art department.

READ: An old foe returns for revenge against Spider-Man in THE AMAZING SPIDER-MAN #18!

This issue was advertised as one of those “things will never be the same again” comic book issues and after reading it, I feel obliged to agree. Story-wise THE AMAZING SPIDER-MAN #19 is incredibly well written and feels genuinely heart-wrenching by the final page, perfectly setting the tone for future issues as CLONE CONSPIRACY approaches. It’s one of those installments where you can guess what might happen and still feel taken back when it happens on panel, which in my book is a sign of good storytelling. Now, with tears having been shed and alliance formed since issue #1 now starting to come together, it’s time for Dan Slott’s master plan to unfold.