On July 1, 2015 the second issue of a new series by Image Comics was released. AIRBOY was the series, which features the writer, James Robinson, and the artist, Greg Hinkle, of the comic as characters within the story in a rye and satirical take on rebooting the Golden Age comic AIRBOY. Our main characters are portrayed as doped up buffoons who are stuck with the fact that the fictional character Airboy has suddenly entered their real world. In their attempts to acclimatise him to the real world they take him to a bar filled with transgender females. One thing leads to another and Airboy realizes mid hook up that the transgender female he is hooking up with has a penis, which is completely possible for a transgender female by the way, and freaks out. And thus the AIRBOY transgender controversy exploded onto internet. 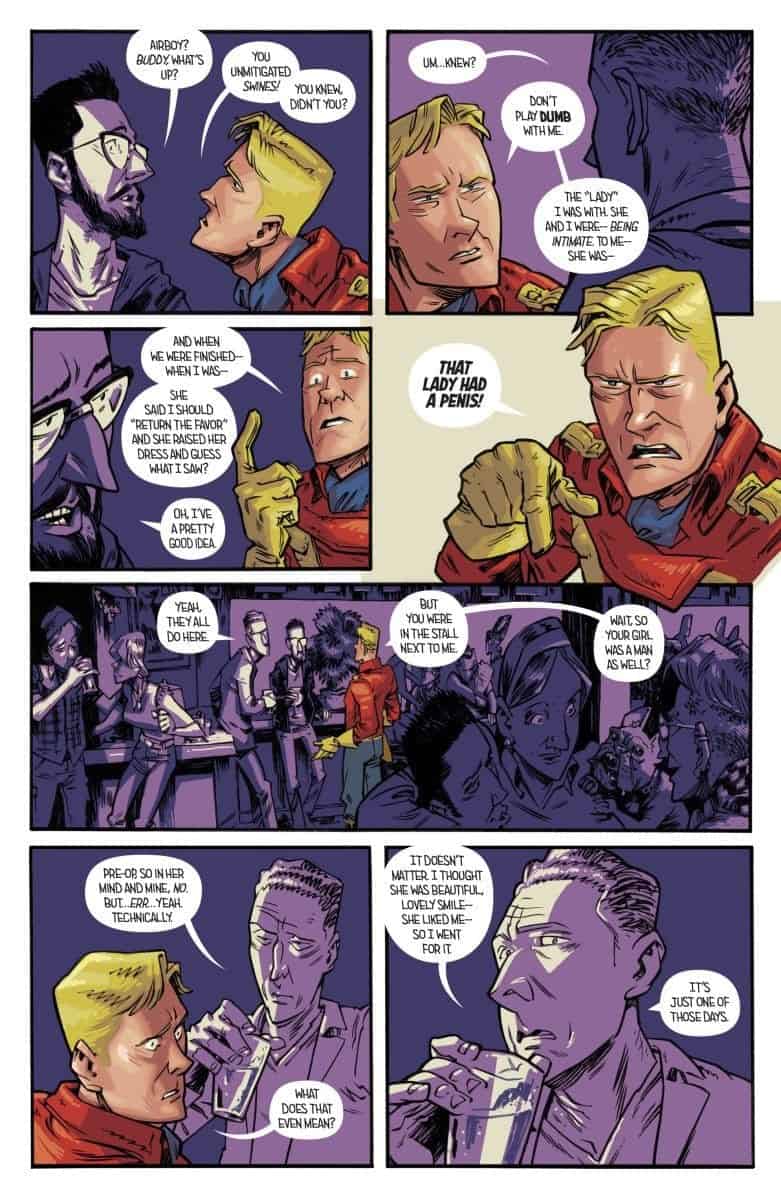 Of course, there are some problems with this reaction to a member of the transgender community. First of all, Airboy’s freak out is a part of a trope called the trans panic trope. In this trope a man is scared and upset that he has been duped by a transgender female because he discovers that she has a penis. This falls into issues of gay panic because these cisgender men are afraid that because they were attracted to this transgender woman with a male sex organ they are gay. Furthermore, as stated extremely well in this post, this portrayal can be damaging because it implies that transgender females are only valued for sexual intercourse when their partner is inebriated and are only interested in sex. This stereotype can lead to violent behavior when men feel that have been duped by a transgender female, and can create a feeling of self-loathing within the transgender community itself.

In the wake of all of this problematic transgender rhetoric, there is a silver lining. After hearing about all of the push back that the comic received, the writer, James Robinson, drafted a very heartfelt and long apology, which can be read fully here. The best part of this clearly well-thought-out response happens near the very end. Robinson says, “There is minor solace – very minor – in the fact that I note the discourse I’m seeing on-line about this, is at least allowing an exchange of views that I think is open, healthy and ultimately a good thing. I hope comic book fans and creators will think more critically about the way trans characters are portrayed.” I have to say that this is also the best thing that can come about from this entire controversy. The internet has started an excellent dialogue about positive ways to include the transgender community in comics, I even attended a panel about this very issue at Special Edition: NYC this year, and I believe that from this controversy the comic community can move forward in a more positive way.

And if you feel like all of this is unnecessary or you are confused by the concept I will point you towards this amazing video Jon Oliver recently produced about what it means to be transgender, and as he says at the end of that video: “If you are not willing to support transgender people for their own sake, at least do it for your own, because we’ve been through this before. We know how this thing ends. If you take the anti-civil rights side and deny people access to something they’re entitled to, history is not going to be kind to you.”