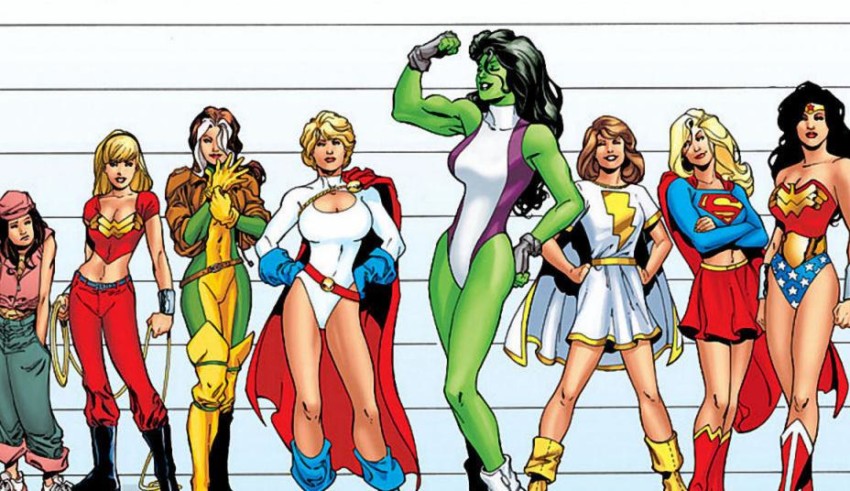 It happened. A super-heroine movie has broken down barriers and set records in a single weekend. It earned over 200 million dollars and sits at 93% on RottenTomatoes. WONDER WOMAN has not only saved the DC Extended Universe, but it has proven that heroines can succeed in the male-driven world of superhero films.

WONDER WOMAN may be the most famous female superhero, with years as a feminist icon, but she shouldn’t be the only one. Comics are full of strong, rich female characters, with stories that could easily fill a two-hour film. It’s impossible to name them all, but there are certain ones that would make an impact. Whether proving women can succeed in different roles or that they can do anything a man can, these heroines more than deserve a turn at the cinema. So now, in order, are the top 10 heroines who deserve a film.

Writer’s Note: I’m not counting SUPERGIRL because she has a TV series and already has multiple episodes to show how awesome she is.

READ: Is WONDER WOMAN’s success due to the lack of Zack Synder?

Gwenpool is a recent addition to Marvel Comics, but she’s already made a name for herself. Her origin story sounds prime for a film — a girl from the real world arriving in the comics universe. She breaks the fourth wall like Deadpool but is even more out of sync with the Marvel Universe than her namesake. Imagine a story where Gwen falls into the Marvel Universe, is overjoyed to the point of insanity, and becomes… whatever Deadpool-type characters are called. Personally, I would love to see Kate Micucci from musical duo Garfunkel and Oates take on the role. Gwenpool is a maniac pixie-esque type. Micucci portrayed just that in shows such as RAISING HOPE. The dark haired actress would do well matching Ryan Reynolds quip for quip. Because, you know, women can push the envelope, too.

Mockingbird has a long history. Bobbi Morse trained to be a top S.H.I.E.L.D. agent and managed to be a member of various incarnations of the Avengers. She appeared on AGENTS OF S.H.I.E.L.D. already, so a movie would be easier for fans to digest. Morse as a S.H.I.E.L.D. spy has plenty of potential. It could even be Marvel’s answer to James Bond, but with a heroic/feminine edge.

Moving from one bird based character to another, Black Canary is a long term DC character with a rare backstory of succession. Dinah Lance inherited the role of Black Canary from her mother. Watching that relationship unfold — and all the drama carried from mother to daughter — would be a fascinating story. Add in Canary’s martial arts skills and supersonic Canary Cry, and you have a heroine that would be a gritty street counterpart to Wonder Woman. Who needs Green Arrow, anyway?

Faith debuted just over a year ago, but she has a strong following. Faith’s powers are relatively minor — flight and a force field. Her bubbly confident personality has been endearing to many fans. A movie about her would be a love letter to female geeks everywhere. It would also a be a major statement in Hollywood to make a movie normalizing a plus-size heroine. Films like CATWOMAN and ELEKTRA exemplify Hollywood’s use of radical female body image, an issue seen across all genres of film. Faith strikes a blow against that, proving character can triumph over unrealistic beauty standards.

Selina Kyle is one of DC’s oldest and most endearing characters who has moved out of Batman’s shadow to carve her own heroic legacy. Her constant movement between good and evil makes for a compelling character. Her backstory is also ripe for an origin story. Besides, humanity owes her a proper film after the nightmare-inducing horror that was the Halle Berry CATWOMAN film.

Seriously, what better reason is there than that?

Jennifer Walters is one of Marvel’s most beloved heroines. She brings super strength, humor, and all the skill of a New York lawyer to the table. Also, Universal owns the right to Hulk. Marvel bringing the green giant’s cousin to the screen in his stead is easy to envision. Imagine all the drama of the Hulk inverted, as Jenn Walters embraces the green and purple of the Hulk legacy. Jenn’s courtroom skills bring a new level of drama to the film as well. Imagine a court case with a giant green lawyer. Destruction would still ensue, of course.

Kate Kane is one of DC’s highest rated heroines. She broke down barriers as a lesbian superhero (the first in the Bat-Family) and has grabbed readers with gripping storylines and beautiful artwork. Kate experienced murder, discrimination, and loss throughout her life. Those elements make for a powerful story that demands to be told on the big screen. Batwoman would be the first lesbian hero in film and be introduced to a new audience. The DCEU put Wonder Woman on the map, so Batwoman would be an excellent follow-up. A gritty crime drama about Kate could replicate the success of Batman films like THE DARK KNIGHT. Plus, don’t you want to see that epic cape artwork come to life?

Now is the perfect time for a Spider-Girl story. LOGAN proved alternate future storylines can work as films. Spider-Man had multiple versions, so why not a succession story? He would easily work onscreen as a retired hero with an emerging super-child. All the elements from Spider-Girl’s comic set up for a great film: Peter has trouble relating to his jock daughter, May Parker is curious about her emerging abilities, the truth being revealed, and the succession from father to daughter. That works as the whole story right there. Go make it Hollywood; we need a Spider-heroine story on the big screen.

LOGAN ended the onscreen saga of Wolverine. It also created the onscreen saga of X-23. Laura Wilder has become a force in comics, especially since becoming the new Wolverine. This film already has the potential to bring that story to life. Imagine: Dafne Keen returns to the role a few years from now, older and still protecting the children from Transigen in Canada. Transigen brings in another threat (Daken, maybe) causing Laura to finally don the cowl of Wolverine. Like Spider-Girl, the movie writes itself and brings something fresh to a fan favorite.

READ: Learn about the story that helped inspire LOGAN!

Ms. Marvel (Kamala Khan) seems to be an obvious heroine for Marvel Studios. Since her introduction, Kamala became a beloved hero and a symbol of both women and minorities. Kamala already appeared in animated form on AVENGERS ASSEMBLE. Also, let’s not forget Ms. Marvel is an inhuman. With the upcoming INHUMANS, television debut would be the obvious choice. It would also be an easy transition for casual fans because they will now understand what an inhuman is.

Plus, CAPTAIN MARVEL coming out next year also gives this new iconic character more backstory. A large part of Kamala’s origin is her idealization of Marvel heroes, specifically Captain Marvel. Her big screen origin movie could delve into all the complicated issues of her story, while still maintaining the fun Kamala brings to the table. A Muslim hero makes a huge statement since Muslims are often misunderstood. Fans have already started showing the way to movie Kamala by making their own mini-films.

In conclusion, any one of these heroines would bring an amazing film with them. Women in films bring a new audience and can change the views of men and women alike. Hollywood needs to keep the ball rolling, and decide not only who gets a film, but how well it gets to be made. This last bit is key, as the bar for heroine-lead movies is much higher than the bar for men.

After all, they finally got it right with WONDER WOMAN.