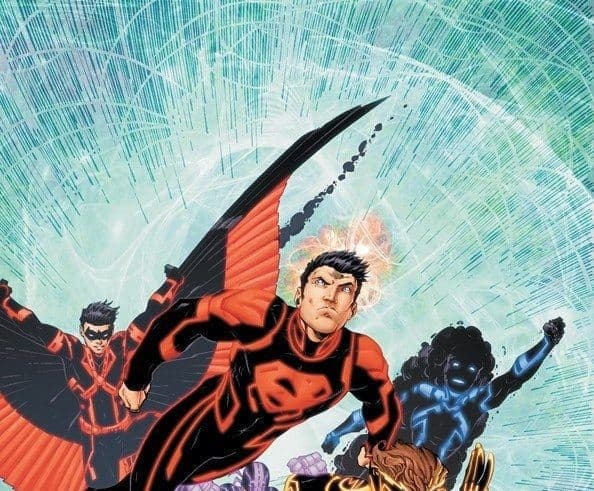 This issue has Red Robin facing off against an AI who goes by the name Algorithm. Red Robin has infiltrated Star Labs in order to hack into their files. I understand that Red Robin is the smart one of the Bat-family, but he is going up against what has to be the dumbest AI ever! She gets riled up when Tim manages to evade her by hacking into the building and he tricks her into helping him escape into the weapons section of Star Labs. Although, the escape sequence was drawn exceptionally well and it passed from panel to panel effortlessly, this still doesn’t make up for the fact that Star Labs AI is comedically stupid.

Hear more about Algorithm and other villains from some of their creators in our interviews!

Apparently Algorithm’s emotional and idiotic behavior was the creator’s intention. Manchester Black, head of Star labs advanced ideas division, was only using Algorithm as part of a much larger plan. Since Tim was unconscious, courtesy of Algorithm knocking him out, he did not hear Manchester Black’s plan. This plan involves getting the Teen Titans to team up with Star Labs, which Manchester Black proposes after Red Robin destroys Algorithm with a weapon that she helped him get to!

The other Titans arrive at Star Labs after Red Robin sends out a distress call. There was also a very minor storyline where Wondergirl has to deal with ravenous fan girls outside her apartment. It was meant to demonstrate how the teen superheroes have become celebrities to the public. The issue ends with Red Robin introducing the team to Manchester Black stating that they have a new base of operations and work to do.

Positives:
– Watching Red Robin execute his plan was enjoyable and the artwork for the scene was colorful.
– Manchester Black is feeling somewhat like Harrison Wells from CW’s The Flash- an ally with ulterior motives.

Negatives:
– Wondergirl’s fan girls felt random, even though it did fit with the idea that the teen superheroes are celebrities now.
– A disappointing AI who let her emotions control her and was outsmarted by a teenage hacker.