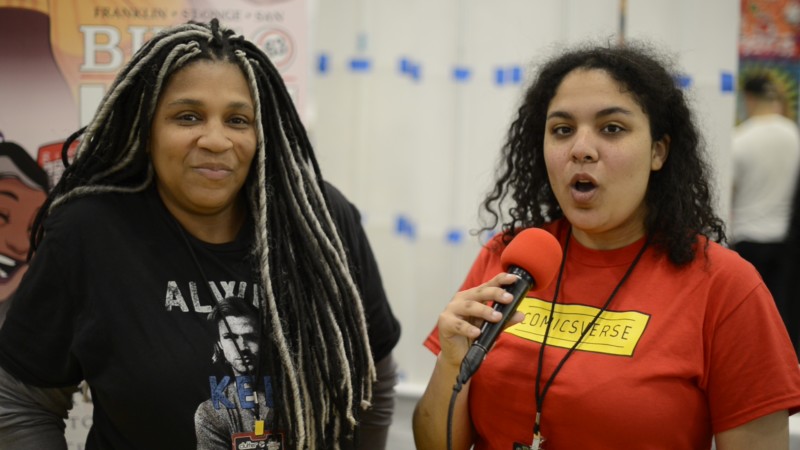 Here is a ComicsVerse exclusive: Tee Franklin is the next big name in comics. A bit presumptuous? Hardly: just look at her bibliography so far. She made her comic writing debut (after being a comics journalist) with “The Outfit,” a short story in the back of Joshua Williamson and Mike Henderson’s NAILBITER #27. Published by Image and edited by the Gail Simone, Tee and artist Juan Ferreyra’s horror story was a strong introduction. Tee wasn’t done. She contributed to the critically-acclaimed, star-studded LOVE IS LOVE anthology, writing “Tears.” Then, Tee got Bingo.

On March 15th, Inclusive Press, Tee’s publishing company, launched a Kickstarter project. BINGO LOVE tells the decades-long love story of Hazel and Mari, high school sweethearts in 1963 Paterson, New Jersey. Meeting in a church bingo, the two girls fall in love. Separated from each other, the two meet fifty years later, and their love continues anew. BINGO LOVE’s plot would show that love does not have an expiration date, and that older, black, queer women are just as worthy of being romantic heroines as young, white, straight women.

Hoping to raise $19,000 to fund her first full-length comic, BINGO LOVE. On March 20th, that goal was met, and by the time the Kickstarter ended, BINGO LOVE was backed at $57,000 and expanded into an 88-page novella with comic stars Marguerite Bennett and DJ Kirkland writing short stories off of Tee’s characters. Even before its estimated shipping date of December 2017, BINGO LOVE has proven a major success and established Tee Franklin as an indomitable force in comics.

READ: Tee had something to say about the Marvel-diversity controversy. So did our CEO: read Justin Alba’s thoughts!

ComicsVerse got the opportunity to speak with Tee at Five Points Festival. Watch to see what inspired BINGO LOVE, why grandmas deserve love too — and to see some shade thrown at Marvel. In other words, watch and fall in love yourself.