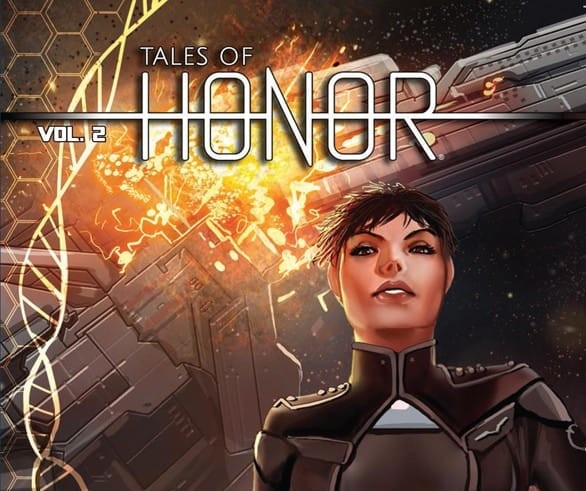 TALES OF HONOR VOL. 2 follows the story of Captain Honor Harrington and her cohorts as she tries to find her missing uncle on the space station Eros. This story was originally based off of award winner David Weber’s military science fiction novels. Writer Matt Hawkins and artist Linda Sejic come together to bring what I consider to be a child of Star Wars and Star Trek, TALES OF HONOR.

READ: Like Top Cow titles? Then check out our review on THE TITHE!

This volume in the TALES OF HONOR series goes deeper then finding a missing uncle. Along the way you’ll discover all the illegal activities that take place on Eros such as genetic slavery, underground death matches between man and animal, and so much more. Eros looks like everything you can dream of on the outside, but this volume forces you to open your eyes just a little bit wider to see the reality of what this space station is like on the inside. 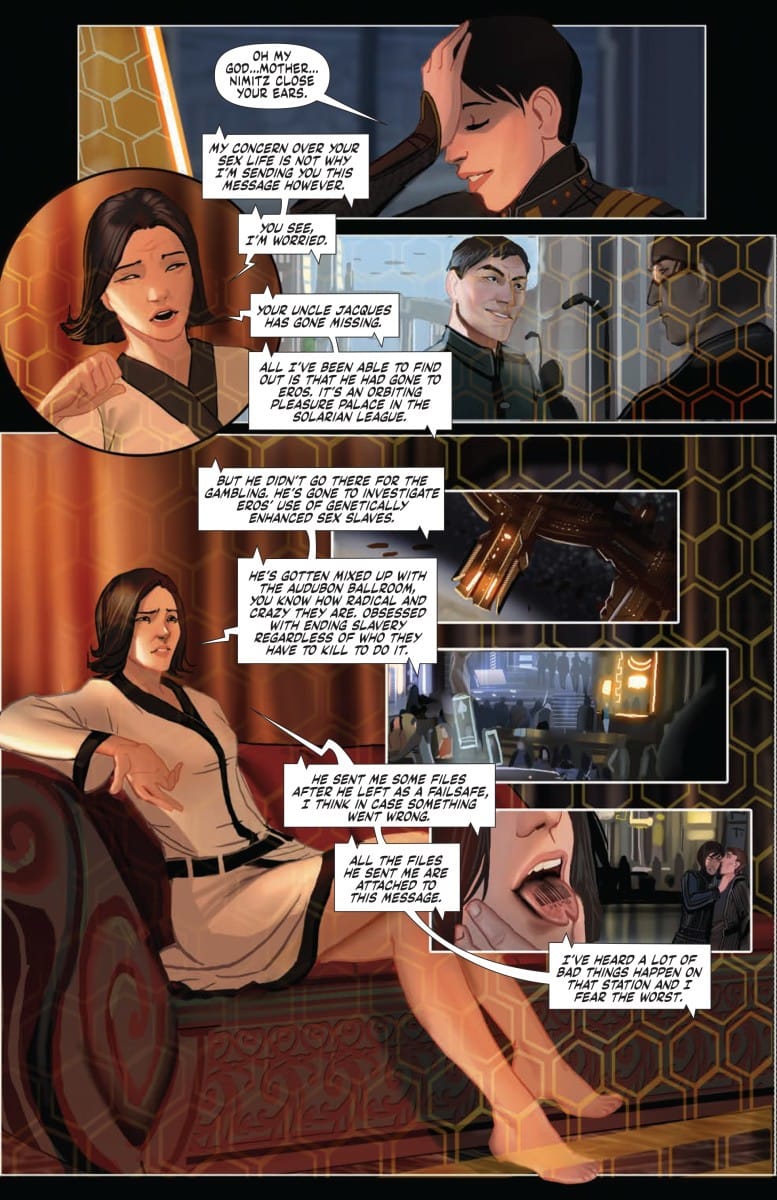 Honor Harrington isn’t your run of the mill female heroine, coming off as tough at first. As you get to know her, however, you’ll see that she can be a character that we can all relate to. Two other characters that are heavily focused on are Harkness and Scotty. Harkness is a man with a tough exterior who you don’t want to piss off. As you get to know him as well, you’ll learn that he’s actually a very reliable person who is capable of getting you whatever you need. Scotty looks to be the baby face of the group and is the type of guy who tries to think things through with reason and logic as opposed to his friend Harkness. Lastly, there’s Harrington’s pet, Nimitz. Nimitz is a tree cat who saved Harrington’s life when she had gotten too close to a family of bears. Ever since then, Nimitz has stood loyally by Harrington’s side.

The approach that artist Linda Sejic takes in drawing this story is a smooth and clean one. It makes me wonder how she is able to portray the rough and gritty scenes into such soft and fluid motions. Sejic is also capable of drawing well-choreographed fight scenes without having to redraw the characters in different positions in one panel: a technique other artists often use to simulate motion. Take a look at the image below to see what I’m talking about. For a sci-fi epic, she is able to properly illustrate a fight scene between two or more people. It’s almost like they’re dancing. 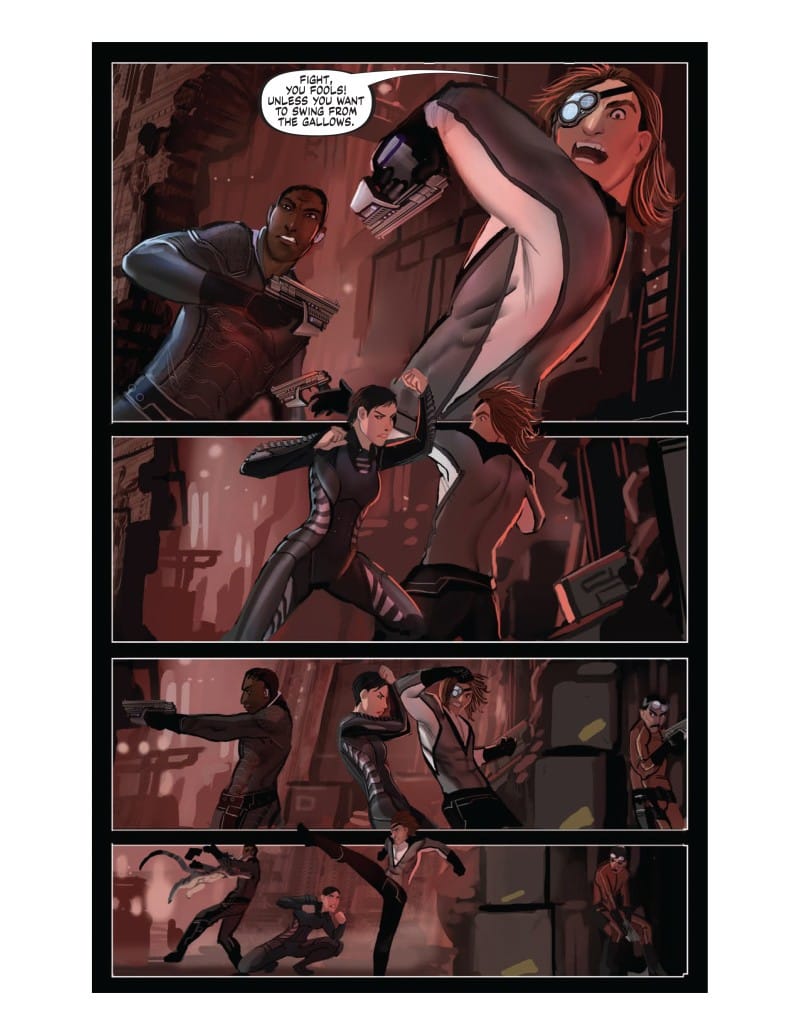 When I think of science fiction, the first thing that comes to mind are aliens, which actually don’t appear at all in TALES OF HONOR. The closest thing to an alien we see are some animals like bears, cats and pumas that are given alien-like features such as extra arms/legs, giant eyes and different skin tones. For a science fiction story, this works well. It can sometimes be a bad thing to have too many aliens, causing the reader to lose track. TALES OF HONOR does a great job of sticking to a more “grounded in reality” version of a sci-fi story by keeping them out.

Writer Matt Hawkins crafts a story with compelling and realistic human emotion in each of his characters. For example, when Harrington is fighting the bear in the beginning of Chapter One, she talks about how she can see the suffering in the bear’s eyes and how it wants its pain to be over. In this moment, we see the type of writing that makes readers like me feel for the characters. As I read over the five chapters that were in this volume, I realized that the writer was able to give our hero many different problems that would normally be expanded on in your average ten issue comic book series. Hawkins was able to cut that down in half and still make the story enjoyable. Some of the larger conflicts our character ran into that I noticed were man vs. man, man vs. nature and man vs. society. The man vs. man conflict arose  when Harrington was up against one of Eros’s very best fighters. Man vs. nature presented itself when Harrington had to combat the animals in the illegal underground fighting tournament. Finally, man vs. society occurred when Harrington had to face things going on in Eros that everyone seemed to condone such as prostitution, gambling and slavery. 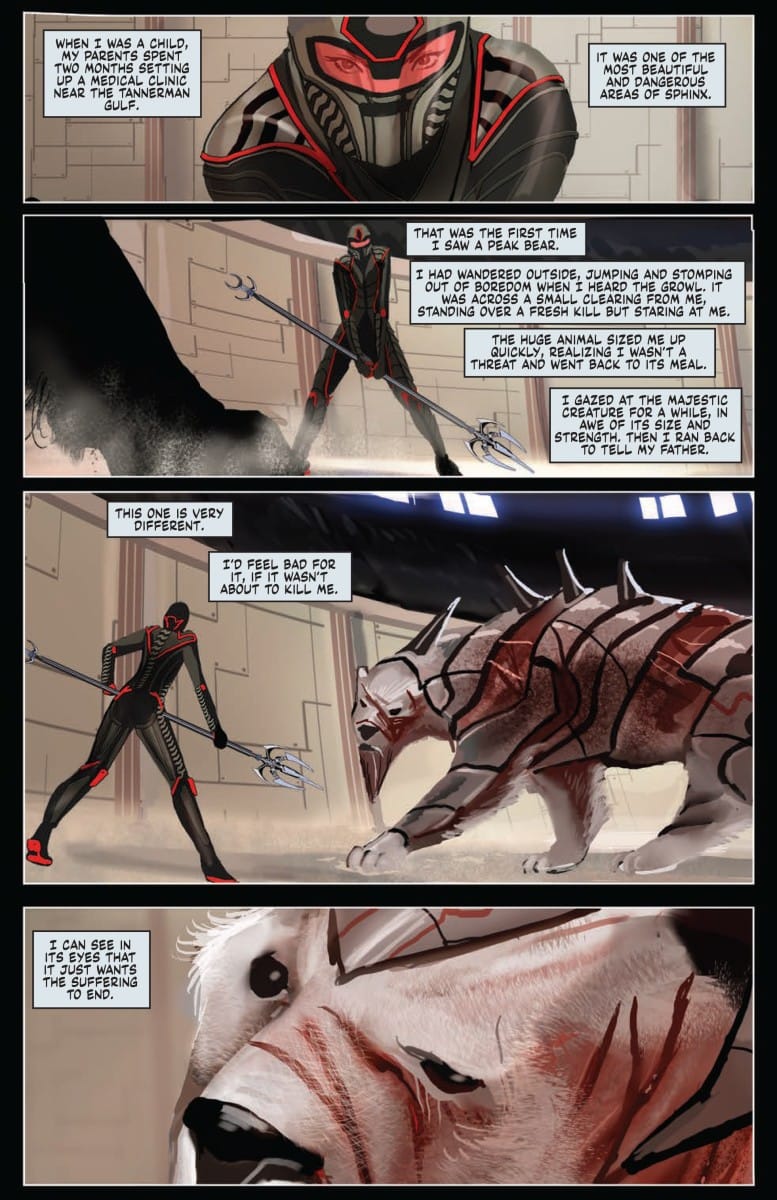 When I first began reading TALES OF HONOR, I didn’t know how to feel about it. I hadn’t read the previous volume, and I was a little scared of just jumping into the next one without reading up on what it was about. However, as I read through this story, I was intrigued by how a sci-fi comic could grab my attention and not let me go. I highly recommend this for anyone into sci-fi and action/adventure stories.