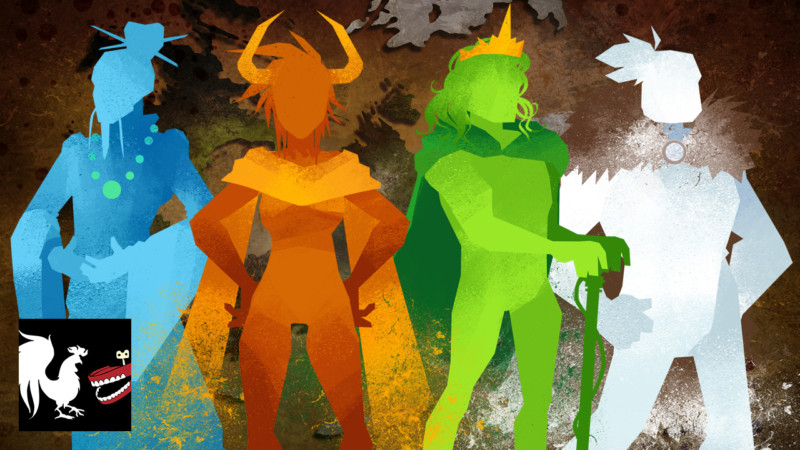 Now that RWBY Volume 4 has reached its finale, let’s get into some in-depth analysis of the series! The show is known for many things, from its dubious status as an anime to its unique 3D animation style. In this article, we’re going to talk about its arguably copious amounts of symbolism. Nearly every character in RWBY alludes to a fairy tale, myth, or historical figure. This can be overwhelming in a good or bad way, depending on how fans react to it, so let’s dive in!

Practically all the characters in RWBY refer back to some well-known myth or fairy tale. During the first season, these references form coherent themes. For example, the members of Team RWBY each have connections to notable stories and fairy tales. Ruby Rose is inspired by LITTLE RED RIDING HOOD, Weiss Schnee’s name literally means “White Snow” in German, Blake Belladonna has her origins in BEAUTY AND THE BEAST, and Yang Xiao Long is based on Goldilocks from THE TALE OF THE THREE BEARS. Each of these characters’ references has a big influence on their designs and roles in the story.

Ruby’s character design is heavily inspired by the usual depictions of Little Red Riding Hood; she wears a red cape in all variations of her outfits and fights off Beowolves in her original trailer. The show consistently depicts her alongside wolf figures to reinforce this association. Yang’s character design is strongly associated with Goldilocks. Not only does she have long, golden hair, but her trailer also shows her fighting against a DJ with a bear mask and a character named Junior, whose real name, Hei Xiong, is Chinese for Black Bear.

READ: Have you seen THE LEGO BATMAN MOVIE yet? If not, read about why you should!

From there, the associations are more subtle, but still indicate close ties with the fairy tale characters. Weiss’s design isn’t nearly as similar to that of Snow White, but her role in the story is. In her trailer, “White,” she sings her theme song “Mirror, Mirror,” which alludes to the mirror in the fairy tale. Also, her role as the heiress of the Schnee Dust Company that mines crystal dust can be seen as a reference to the seven dwarves, who were jewel miners.

Lastly, Blake’s association with BEAUTY AND THE BEAST is slightly more abstract. In the first season, she is shown to have a love for reading like Belle. One of the directors of RWBY, Miles Luna, stated that the team tried to surround her with many “Belle-related items.” The strongest association between her origins and her story is her relationship with Adam Taurus. Adam is a faunus like Blake, meaning they have animal body parts. Adam has horns, giving him a beast-like appearance. Their relationship is also shown to be estranged, like Belle’s initial encounters with the Beast in the fairy tale.

We also have Team JNPR, who draws even more on history and mythology. Jaune Arc is inspired by Joan of Arc, a hero and martyr of France; Nora Valkyrie draws on Thor from Norse mythology, hammer and all; Pyrrha Nikos distinctly represents Achilles from Greek mythology; and Lie Ren is said to be based on Hua Mulan. (Fun fact: these characters’ mythological counterparts all cross-dressed at one point to disguise themselves). Again, all these characters draw on well-known legendary figures, and the characters also have detailed references to those figures. Jaune’s relatively simple weaponry compared to those of his classmates stick to Joan of Arc’s traditional depictions. Also, Nora’s weapon of choice is a hammer, referencing Thor’s Mjölnir. Then there is Pyrrha, the champion student wielding a lance and shield, directly drawing on Achilles, and so on.

CLICK: Are you a fan of VOLTRON? Read about its highlights from the second season here!

However, this is where things might start to tip into overkill. While Teams RWBY and JNPR seem to have coherent themes, Volumes 3 and 4 bring in even more students and enemies that start to draw on random lore.

Team SSSN comes together in Volume 3, despite their leader, Sun Wukong, having been introduced in Volume 1. That’s just one reason why there’s a slight dissonance between these team members. Sun Wukong is based on the Monkey King from the Chinese novel JOURNEY TO THE WEST, not unlike how Lie Ren is inspired by the BALLAD OF MULAN (or its Disney interpretation). However, his teammates’ inspirations have little to do with his. Scarlet David is based on Peter Pan, Sage Ayana is based on an unspecified character from Aesop’s Fables, and Neptune Vasilias is based on the Roman God of the sea. For some reason, the characters arbitrarily refer to random lore just for the sake of the fantastical connection.

RWBY has already established that its characters have relatively deep ties to their inspirations. All of Team RWBY and Team JNPR generally associate strongly in design and story with their mythological counterparts. So, when more characters come in with arbitrary associations, it can undermine the interesting quality of established references. It can also raise the audience’s expectations of these characters’ significance to the story if the character is inspired by an interesting story or mythological figure.

Why It Still Works

Overall, many fans likely have no problem with the amount of symbolism Rooster Teeth codes into its characters. There are many reasons why these references work. For one, RWBY is not really a crossover adaptation of any of the stories its characters are drawn from. The show doesn’t try to attempt anything like ABC’s ONCE UPON A TIME crossover series (which is an overwhelming mishmash of every Disney story ever made and then some). The producers often emphasize that the characters are inspired by, but not based on, the characters they refer to. Furthermore, the references feed into fandom culture, promoting active fan participation, as well as subtly affecting the audience’s expectations of the story.

LOOK: Have you heard of Netflix’s series DEAR WHITE PEOPLE? Check out Peter Swann’s article on it here!

A great fandom pastime is predicting the futures and fates of beloved characters. Rooster Teeth directly feeds into this practice by giving fan theorists a lot to go off of. The RWBY characters’ fairy tale, historical, and mythological connections can all be taken as indicators of their roles in the future. Entire communities revolve around speculating on the plot of the show. For example, on Tumblr, rwby-fan-theories is a popular blog where fans can submit and share their theories.

Many of the theories lately have to do with Team JNPR’s fate. Each member of the team has ties to a character that dies in their original stories. For example, Pyrrha’s storyline tied very closely into that of Achilles, and her death in “End of the Beginning” mirrored the Greek hero’s downfall, arrow to the ankle and all. So, fans rightfully speculate that the rest of the team might follow suit. Those who are interested in delving deeper into this discussion can read more here.

READ: Take a look at Brian Long’s article on how the 2017 Oscar Awards capture a divided America

The fact that symbolism encourages fandom participation isn’t the only reason it’s useful. It can actually keep the audience’s attention by subverting their expectations. Good writers know what fans might expect when certain characters are associated with notable figures. For example, in the episode “No Safe Haven,” Ren, Nora, Jaune, and Ruby face off against a terrifying Grimm: the Nucklavee. By now, the writers have made it clear that main characters can die. This raises the tension when we see Ren charging in since now he is “fair game” to kill.

On the other hand, the writers can completely change traits of their characters to distinguish them from their inspiring figure. For example, Neptune Vasilias is actually very afraid of water. While this is a simple example, it shows that the writers have the potential surprise the audience. Currently, RWBY’s story is starting to ramp up in intensity, so no fan-theories have either been confirmed or denied. However, it’s clear that RWBY could go in many directions for each character’s arc because of fan expectations.

RWBY’s near-excessive symbolism also has a psychological aspect to it. The show itself makes conscious efforts to establish its own history and mythology. In each volume, there are several “World of Remnant” videos that establish the common knowledge of the world the characters live in. For example, we learn the history of how the Huntsmen profession came to be and the lore of the Four Maidens. In order to give more credibility to the stories of Remnant, the writers purposely imbue the characters with references from our world. This way, RWBY subtly primes the audience’s mind to categorize Remnant’s lore into the same area of our mind that we categorize our lore.

LOOK: Are you a fan of Captain America? Check out this article by Rachel Bullen here!

In the end, RWBY’s plethora of symbolism and references does more good for the show than bad. It may contribute to the critiques against the series, but it indicates the story’s developing sophistication. It’s safe to say that this is definitely something that people should check out and that fans can look forward to sticking with.