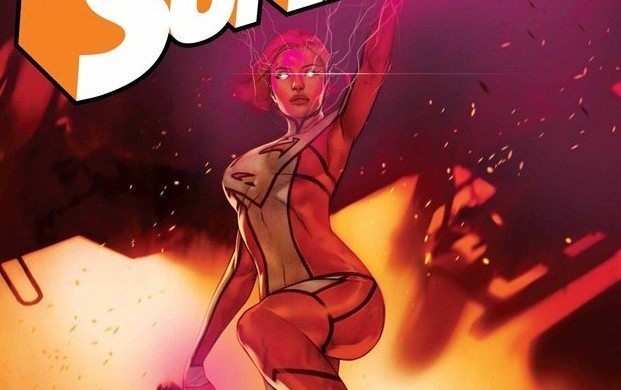 When we last left SUPERWOMAN, Lena Luthor, Lex’s maniacal resurrected sister, had revealed herself to Metropolis. As she prepared to lay siege to the city, Lana Lang discovered that the spectre of Lois Lane was talking to her. Lana tried to cope with this new development while continuing to fight off the radioactive disease that’s killing her. SUPERWOMAN #5 picks up these threads, and adds more intrigue into Lena’s ultimate plan, while strengthening Lana’s resolve to do what’s right. The result is a nonsensical thrill-ride, with exciting plot developments that are viscerally thrilling but don’t entirely make sense. By now that’s basically what we’ve come to expect in SUPERWOMAN.

In Phil Jimenez’s female-driven series, the most striking aspects have been the central twists and turns of the plot and the strength of Lana Lang’s character. In SUPERWOMAN #5, Lena’s Bizarro Superwomen have imprisoned the citizens of Metropolis in Temporal Cubes, trapping them outside of time and space (Lex is still trapped in one these back at Lexcorp). The self-christened Ultrawoman is using the technology developed by her brother to lay siege to Metropolis, and her ultimate goal appears to be to capture Superwoman and drain her of her power. Utilizing Lana’s energy source, and combining it with her own power drawn from an anti-Mother Box, Ultrawoman will achieve the power necessary to conquer the physical world. Lana, meanwhile, is struggling with her own impending death from that very same power source. But she has to put her concerns for herself aside in order to save Metropolis, with a little help from John Henry Irons AKA Steel and the rest of her super-powered family.

READ: Superwoman first flew onto the scene in SUPERWOMAN #1, and we reviewed it right here!

If this all sounds incredibly overstuffed, that’s because it basically is. But that’s the mainstay of SUPERWOMAN by this point, and it’s also one of the series greatest delights. When SUPERWOMAN #1 hit the shelves, I almost stopped reading. The story line was so convoluted and utterly packed with unnecessary detail. The artwork had no room to breathe because each page was stuffed with about 17 panels. It was so dense that it was almost unreadable. But right before I threw down the comic in frustration, something amazing happened… the NEW 52 Lois Lane was murdered right before Lana’s eyes! And the twists just kept coming issue after issue. Lana Lang had a fatal disease. Lex Luthor’s sister was back from the dead. Lois Lane returned as a ghostly spectre of Lana’s subconscious. It’s hard to sustain a series on pure shock value, but the mysteries in SUPERWOMAN have been so fascinating that they carry the story’s momentum forward.

That remains true in this week’s issue. By now, many of the overly-congested plot problems have leveled out, and even the page panels have been downsized. We are now able to hone in on the two central characters of the story: Lana and Lena. Their parallel development from ordinary woman to super-powered Goddess has made for a fascinating dynamic. For Lena, her goal is to destroy everything that her brother Lex had built. She blames him for her condition and seeks vengeance by using his technology to wreak havoc on Metropolis’ citizens. There appears to be a deeper goal she’s striving for too, with mysterious experiments on the villains of Metropolis depicted in her lab. What Lena intends to do with them is unclear, and this mystery could go in any number of directions. Jimenez, again, has a knack for throwing everything to the wall and seeing what sticks.

These villains also seem unusually calm and polite for having just been kidnapped and forced into Temporal Cubes. Atomic Skull is borderline chatty. Also, in one of the series’ trade mark twists, one of Lena’s prisoners is none other than *drumroll* the human Clark Kent! He’s hanging out in a Temporal Cube wearing a weird smile, like he just did something naughty. Lena seems to know that there’s something not quite normal about him. And it’s interesting to note that this series takes place before ACTION COMICS, where human Clark is currently spending his time with apparently no memory of being in a Temporal Cube. Is it possible that we’re going to learn how the human Clark came to be, and that Lena had something to do with it? With this bizarre series, anything is possible.

Speaking of bizarre, this issue also features the return of the two Bizarro Superwomen from the first issue, one of whom was the shape-shifter and the other was the one who accelerated Lois’ terminal disease and, in Lana’s eyes, effectively murdered her. This particular Bizarro Superwoman seems to be a bit of a conundrum, since she expresses concern for Metropolis’ citizens throughout the issue, and indeed comes to Lana’s rescue at the end. Lena also taunts this Bizarro throughout the issue and warns her that she’d better not fail unless she wants to be replaced. It’s sort of odd that Jimenez is giving so much attention to one Bizarro Superwoman, who looks exactly the same as the rest of them. Considering her concern for Lana, I wonder if somehow Lois Lane’s essence could have become trapped inside her when she murdered Lois. This is pure speculation of course, but Jimenez’s storytelling is so completely out there that pondering outrageous conclusions seems appropriate.

READ: Superwoman’s role was discussed in our article, “DC’S Superman: Does He Still Belong Here?“

Amidst all the insanity, the one thing grounding the series, and this issue in particular, is the strength of Lana Lang’s character. Her toughness, integrity and moral certainty even in the face of her impending demise are endearing. They were endearing before she had powers, and they give us all the more reason to root for her now. In this issue, Lana begins to push away her husband, Steel. She distances herself from him and her family as she prepares to take on Ultrawoman herself. Though it isn’t immediately clear why, we learn through her conversation with the spectre of Lois Lane that she’s facing down her own fear through action. When her niece, Natasha, is under attack by the Bizarro Superwomen, Lana races off to save her without any thought for her own critical condition. Using her powers could kill her, but she’s too hot headed and courageous to care. She’s defending the people she loves recklessly because she knows she can afford to. Lana is a woman of action, and her core qualities are her strength and pure human decency. She lacks subtlety, but then again, so does Clark Kent. Lana Lang proves time and time again why she’s truly the woman meant to wear the mantle of Superman.

And that mantle sure looks great on her. I really dig Superwoman’s design. The red and white costume is an eye-catcher, sexy but not exploitative, consistently popping off the page. Lana’s costume design is just about the only thing I like about Jimenez’s art though. His habit of drawing very rough sketches of the characters and filling them out with heavy black shadows is a bit crude, and results in difficulty discerning the characters’ facial expressions. This is particularly problematic for the army of  Bizarro Superwomen. They’re all drawn exactly the same, including the one who appears to be repenting. The only thing distinguishing her from the other Bizarros are her facial expressions, but because they’re drawn so crudely, the differences are hard to catch. The tiny panels don’t help either, as characters are often squished into miniscule form, and only rarely do we get enough panel room to see their range of emotions. I do like the way Jimenez draws carnage and devastation, though. Scenes of the Bizarro Superwomen imprisoning Metropolis citizens and tearing through the city are rife with appropriate clutter and grittiness.

With mysteries abounding and the usual twists and turns aplenty, SUPERWOMAN continues to head in an exciting direction. The story doesn’t always make a ton of sense, but that’s just part of the fun. The artwork remains problematic and sometimes hard on the eyes, but the action scenes are executed vividly. And with a wonderful character like Lana Lang anchoring all the insanity, there’s plenty of reason to stick with SUPERWOMAN for months to come.