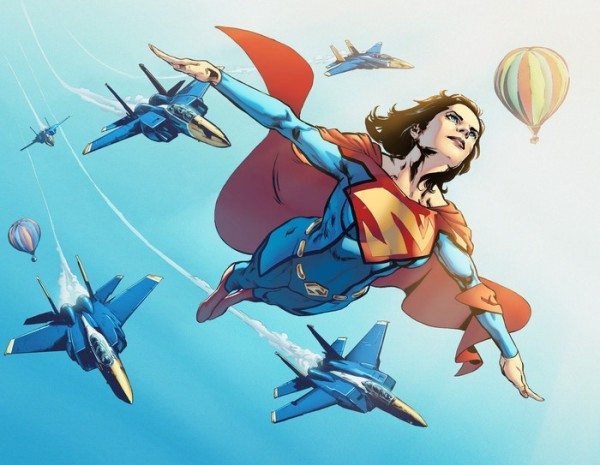 Following the FINAL DAYS OF SUPERMAN event, Lois Lane has (most of) the powers of Superman. Since Metropolis is currently lacking a hero with an S-shield, Lex takes it upon himself to become the city’s new Superman! Lois and Lana can’t allow Lex to be the only one to carry on the Superman legacy, so they decide Lois will become Superwoman!

READ: Check out our JUSTICE LEAGUE #52 review and see how Lex became the new Man of Steel!

It begins with Lana on the Kent farm a few weeks before our main story in Metropolis. Lois has come to Lana for advice about how to use her new powers—seeing as Lana was the one who taught Superman control. Back in Metropolis, Lex unveils a giant battleship called the Gestalt. Suddenly the ship begins to head towards a bridge where thousands of people stand for the unveiling of the Gestalt! Lois, as Superwoman, tries to intervene but the momentum of the ship is too much for her to stop. Help arrives in the form of Lana Lang, who also gained powers from Superman’s death. The two Superwomen manage to stop the ship. The next day the duo, along with Lexcorp scientists, attempt to investigate the problem. Lana senses that some creature is killing the scientists on board! This creature was the one who pushed the ship into the bridge the previous day! Soon enough that creature attacks Lois, and Lana watches in horror as her friend perishes at the hands of the monster. 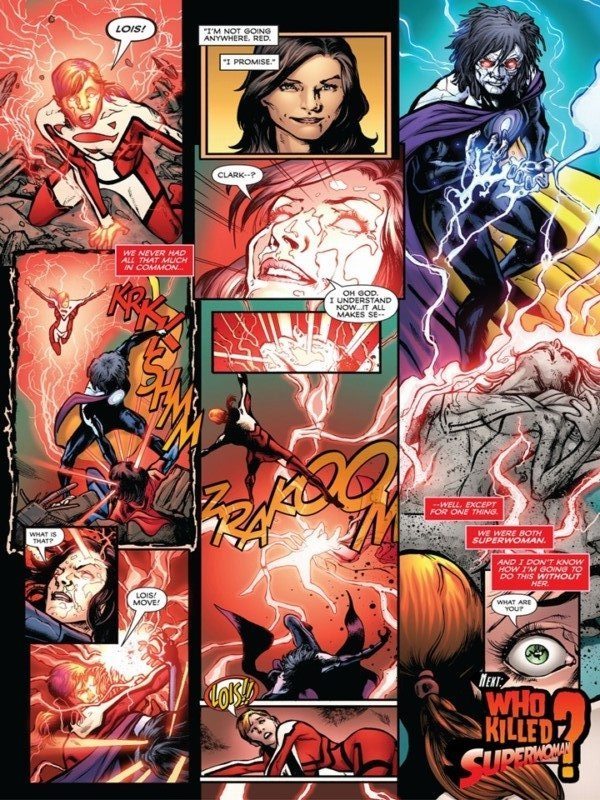 You read that last line correctly, Lois Lane dies in the very first issue of SUPERWOMAN. This is quite a bold move on Phil Jimenez’s part. Going into this comic I was expecting the Superwoman that would be in the forefront would be Lois Lane, however, it was Lana who was narrating the story. Originally this seemed like an interesting idea, having a supporting character tell her account of the protagonist from her perspective. However, it looks as if Lana will be starring as the main Superwoman of this comic.

I actually haven’t finished reading the FINAL DAYS OF SUPERMAN arc. So I went into this comic unaware that Lois and Lana were both affected by the release of energy from Superman’s explosive demise. The dynamic between the two was already fascinating before the reveal that they both had powers. Lois and Lana aren’t exactly best friends, they’re usually bitter romantic rivals or tolerable acquaintances, but it seems the death of their mutual friend has brought them closer together. At least, it did until Lois was “killed”. I do hope Jimenez has another trick up his sleeve because I was really looking forward to these two Superwomen going through this arc together. 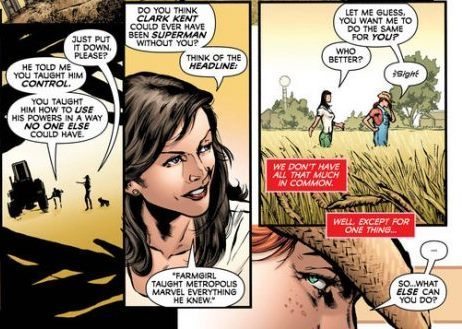 Although he was in the issue, Lex Luthor’s presence was terribly underwhelming. During the Gestalt attack Lex was sidelined due to his suit malfunctioning. Then, since the Superwomen don’t trust Lex, they refused to allow him on board the remains of the ship. Personally I wouldn’t let Lex leave my sight, especially because I don’t trust the man, but it seems this arc may be one of those rare occasions where Lex is not the antagonist. The main villain behind the attack remains a mystery, although we did get a good look at the creature who killed Lois Lane. Her appearance made her look like a Bizzaro version of Lois, interestingly enough. I’m curious to find out the story behind this Bizzaro-Superwoman.

READ: Learn about Superman’s symbol in our Successful Symbols series.

As for the artwork, I must tip my hat to Jimenez’s style. The action scenes were impactful as we saw the Superwomen attempt to stop the runaway ship. The way the ship almost broke through the other panels made it appear as if it was coming out of the page! He also set up smaller panels with close-ups of certain character’s faces. This technique really added to the emotion behind certain scenes with particular characters. Jimenez also uses this technique to give a glimpse of the mysterious villain. It was only a shot of her eyes, but it was enough to pique the interest of any reader. The close-quarters action scenes were phenomenal as well. One could get the sensation of the devastating blow Lois felt when Bizzaro-Superwoman slammed into her!

All in all, a surprising first issue but an intriguing one. I would say that this comic is certainly worthy your time if you’re a fan of Superman’s supporting cast. It’s a welcome change of pace to see other characters within the Superman mythos get a chance to shine, even if it is for only a short time!