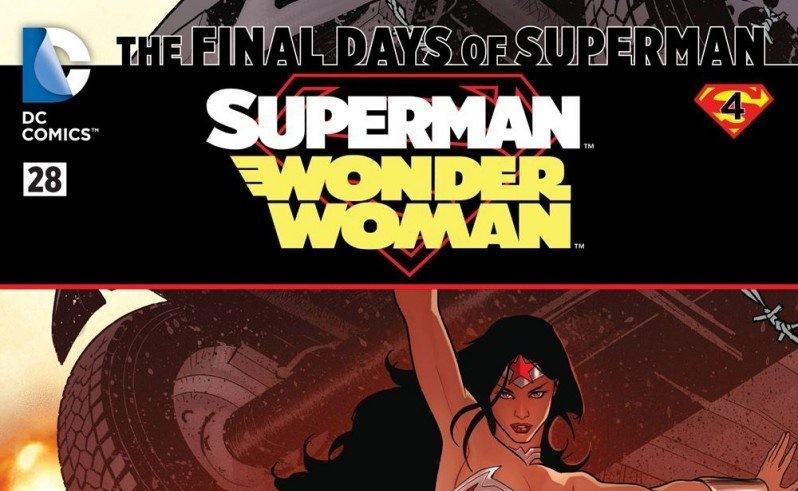 SUPERMAN/WONDER WOMAN #28 is part 4 in the story arc of The Final Days of Superman. This story spans over the course of SUPERMAN, BATMAN/SUPERMAN and ACTION COMICS SUPERMAN as well as SUPERMAN/WONDER WOMAN. This specific issue focuses on Superman telling the woman that he loves, Wonder Woman, that he’s dying. No cure, no magical amulet, no Dragon Balls, this is it. Clark has come to the conclusion that there’s no coming back from this. His main focus now is to do everything that he, Superman, can do to make the world a better place before his time is up.

READ: A little lost? No worries, you can catch up on what happened before this issue in ACTION COMICS #51!

As much as this issue focuses on Clark and Diana coping with the fact that Superman is going to die, a call from Lois Lane comes in to Clark.  A spat occurs over at the Daily Planet when someone claiming to be Superman comes in and kills three security guards and critically injures another. At exactly the same moment, Diana gets a call from Steve Trevor saying that A.R.G.U.S. has taken the impostor into custody.  This sends Superman and Wonder Woman to Stryker’s Island where the Superman impostor is being held, as well as an old enemy who’s partly responsible for Superman’s death sentence. 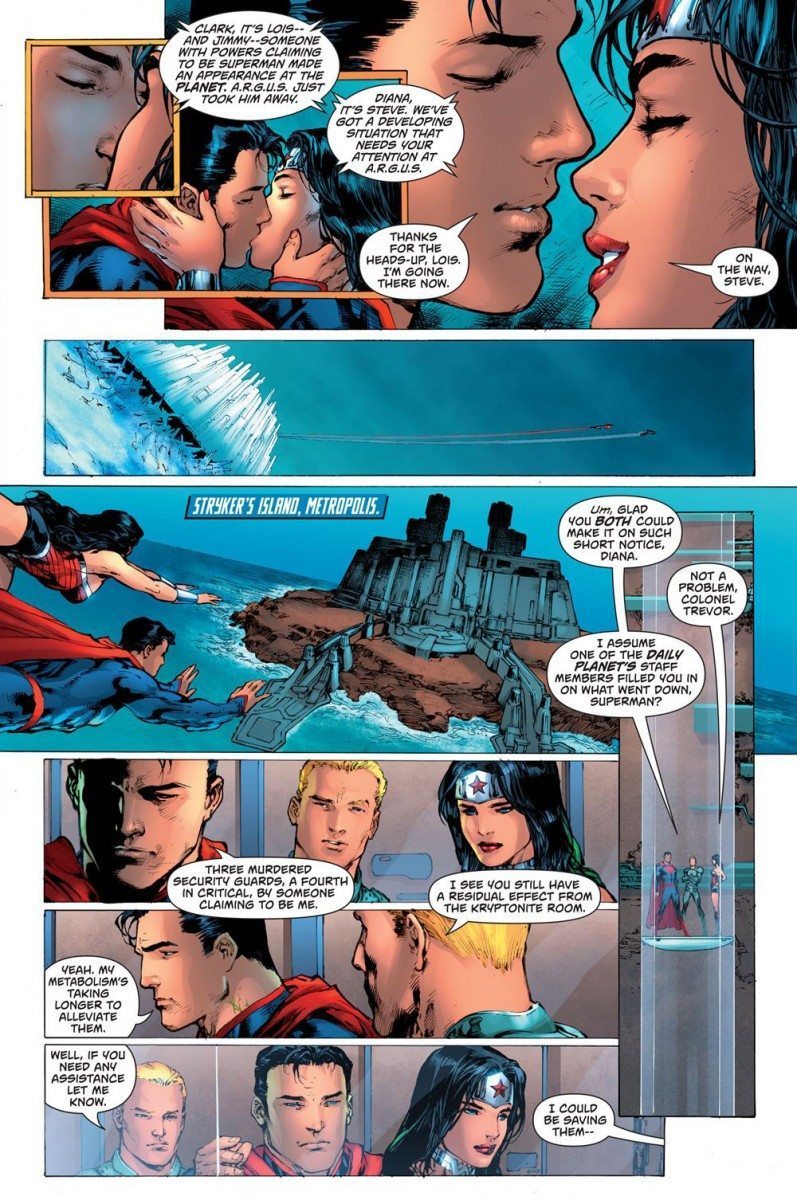 I don’t read much Superman, but hasn’t Superman died before? Why kill him off again?  How many times can you kill a hero? Killing off superheroes seems to be more of a marketing ploy than a part of the main stories themselves. Every time a superhero dies, the price of that character’s comic is raised by a dollar or two. It’s understandable to kill someone off as a way of gaining more readers or increasing sales, but is DC just doing this because they’re rebooting the franchise again? Come this summer, comics like Batman, Superman, Wonder Woman, etc., will get a #1 issue, again. First there was the New 52, and then there was Convergence, now we’re getting DC Rebirth. When will enough be enough!? But I digress.

The art in this issue is breathtaking, truly remarkable. The illustrations are perfect to a tee. The scene where Superman and Wonder Woman kiss is gorgeous. From the shading on their muscles to the defined lines that make up their costumes, the colors that engulf these two gods are a sight for sore eyes. Artist Ed Benes and colorist Alex Sinclair come together to paint a picture that is just too great for words. Benes’s work can be seen in comics such as The New 52’s BIRDS OF PREY, JUSTICE LEAGUE OF AMERICA and SUPERMAN: RETURN OF DOOMSDAY. Sinclair’s coloring can be seen in titles such as JUSTICE LEAGUE, WONDER WOMAN and GREEN LANTERN. 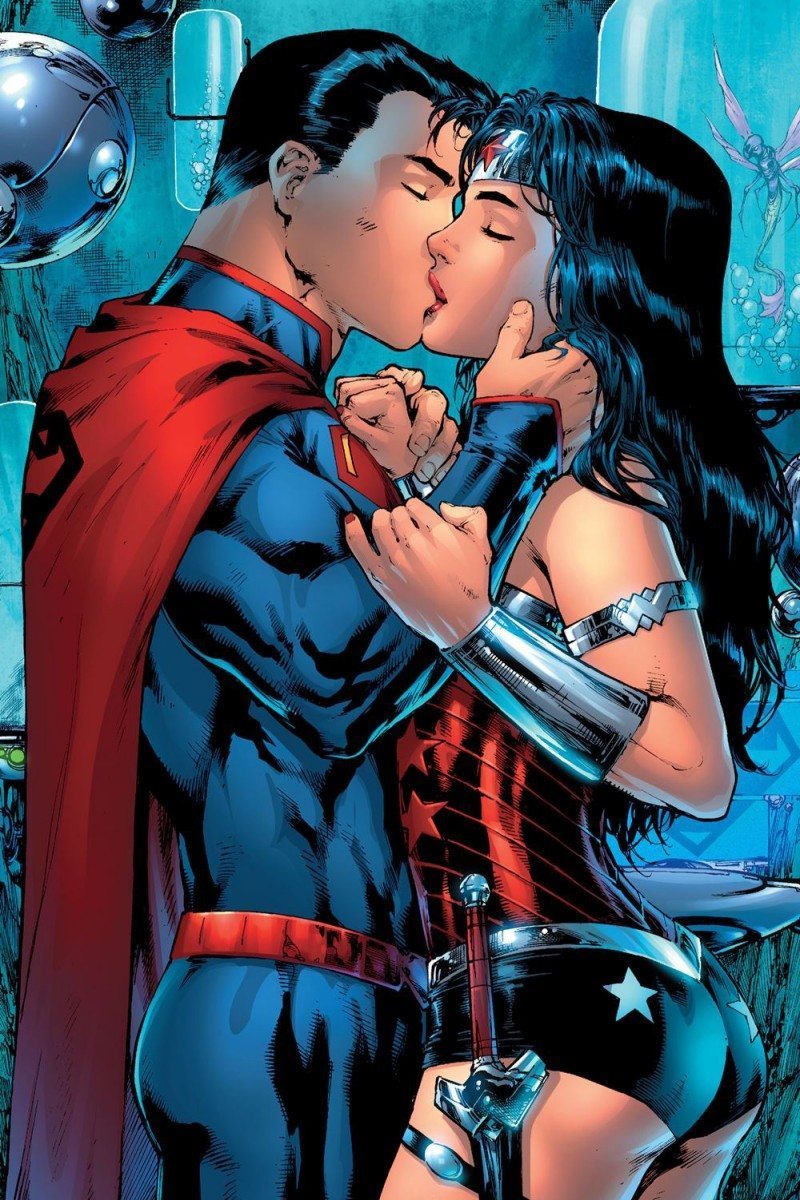 Writer Peter J. Tomasi, one of my favorite writers, tells a small part of a much bigger story revolving around the upcoming demise of Superman. Although there isn’t as much action as you’d expect to find in a Superman comic, Tomasi comes up with a heartfelt introduction of Superman explaining to the woman he loves that he’s dying. What Tomasi has done to make Superman even more mature is show that he accepts death. This isn’t something that you find many fictional characters doing, let alone real people. He knows that there’s no cure for what’s ailing him. All he wants to do now is be the Superman that the people of the world expect him to be. Tomasi is able to play this issue out softly, even with the fighting that follows later on between Wonder Woman and the impostor Superman. Other notable work by Tomasi can be found in the New 52’s BATMAN AND ROBIN, WRATH OF THE FIRST LANTERN and FOREVER EVIL: ARKHAM WAR.

The biggest question that I find myself asking after reading this issue is whether or not DC will choose to kill off Superman. I don’t think they will since the reboot of the series is only a few months away. It would be pointless to kill him off when fans know that he’s going to be back in a few months. What do you think? Tell us in the comments below!