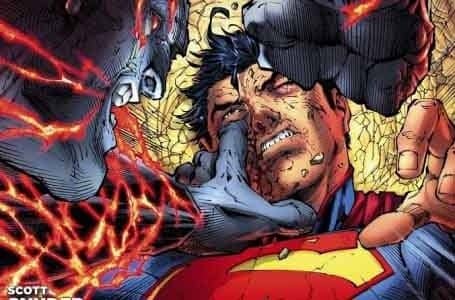 To start I’ll tell you I always like my heroes a bit psychologically unbalanced and as such I’ve always favoured Batman when it comes to picking up a comicbook; not only that I’ve always preferred my heroes to be that i.e. not super. I’m more than aware that “Super” heroes often have immobilising vulnerabilities and that once every so often they’ll appear during a story arc which is supposed to give you that feeling of dread, except these people are…well…super and tend to bounce right back. The worst offender for me has always been the big man in red and blue, the dubbed Ultimate Boy Scout the do-gooder that was there for Truth, Justice and of course the American way. Now straight away as a UK resident the final part of that bit should make my teeth itch like I’ve just gargled full-fat Coca-Cola but I hold no grievance against the American bit (I have numerous friends all over the world and a fair few of those in the USA) it’s mainly the fact that Superman has always been amazingly dull.

Take the recent Man of Steel film where many people complained about a number of issues mainly Superman killing somebody on purpose (the thousands he killed by accident we didn’t care about), the fact that the citizens of Metropolis are treated like the Bad Pigs from Angry birds and that the film got a bit boring at the beginning, during the middle and near the end. Now other than that the hack Zack Snyder had is claws on it, the real reason the film I consider the film to be rather dull was its main subject matter i.e. Superman.

Now turning back to why I’m here, which is I have been given six issues of Superman Unchained series to review. I have to say wasn’t my happiest of days, as yet, of being a reviewer though if I could pick and choose only the good stuff I think I’d get bored and have to start inventing words and amalgamating words like great or fantastic to make new ones like, “Gastric!” so you see why that would be a bad thing? With the opening issue I was cradled slightly as on the cover I was greeted with the names of the two greats Scott Snyder and Jim Lee and the first issue was okay nothing overly impressive though. I was shown Superman being worked to a limit, he was Superman; we caught glimpses of perhaps secret Government Bases and Cyber-Terrorists called Ascension just enough to interest but nothing overly impressive. It was come issue #2 that I sat up straight here Batman enters the mix with a suit which is capable of evading all different visions Superman chooses to use, but what really impresses me is Lois Lanes father, General Lane and his attitude to Superman it is really something he needs to hear and it’s at this moment we’re introduced to weapons that have been designed to inflict pain on Supes by the US Army. Then we’re introduced to Wraith.

Over the next four issues Snyder and Co. deliver something I’d never thought I’d ever enjoy, which is Superman comics. It wasn’t the fact that Superman gets the stuffing knock out of him, nor the fact that we discover the Russians too had created weapons that can make Superman bleed. Superman has to adapt at these points, he become vulnerable and that bit more human. He uses cunning and resources of friends rather than a sun-kissed punch to end a nation worrying foe. He starts to earn that hero badge, rather than just be born with it.

If you like me were once a person who disliked this over-grown boy scout you may be happy going back and starting a fresh with Superman Unchained.