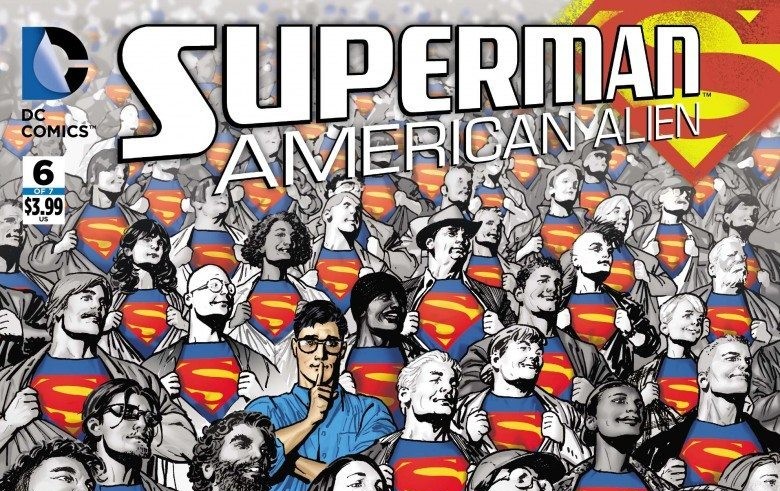 Hollywood screenwriter Max Landis is mostly known for his film scripts, having sold an unprecedented 20+ movie scripts in the past few years. Though Landis is is a prolific writer known for his high volume of stories, but when it comes to his comic scripting what stands out is the quality as opposed to the quantity. DC gave him a 7-issue run and free reign to reinvent his favorite DC character, Superman, and he has made the best of it. Issue #6 is a great addition to the trend of modernizing and updating Superman in a time filled with internet cats and deep millennial cynicism.

With issue #6 of AMERICAN ALIEN, Landis has found a way to create a charming, realistic, and humanly flawed Clark Kent in a time where popular trends and fame have short shelf lives. The focus of this issue isn’t Superman, but rather Clark and his relationship to himself and Smallville friends Pete and Kenny. We don’t get to see Clark rock the blue tights or red cape, but what we do get in this issue is some deep analysis of the character. Issue #5 was an introduction to Landis’ version of “Superman” the hero, whereas issue #6 is more of an introspective analysis of what it means to not only be that hero, but also what it means to be Clark Kent, a small town kid who traded in a farm for a condo in the big city. 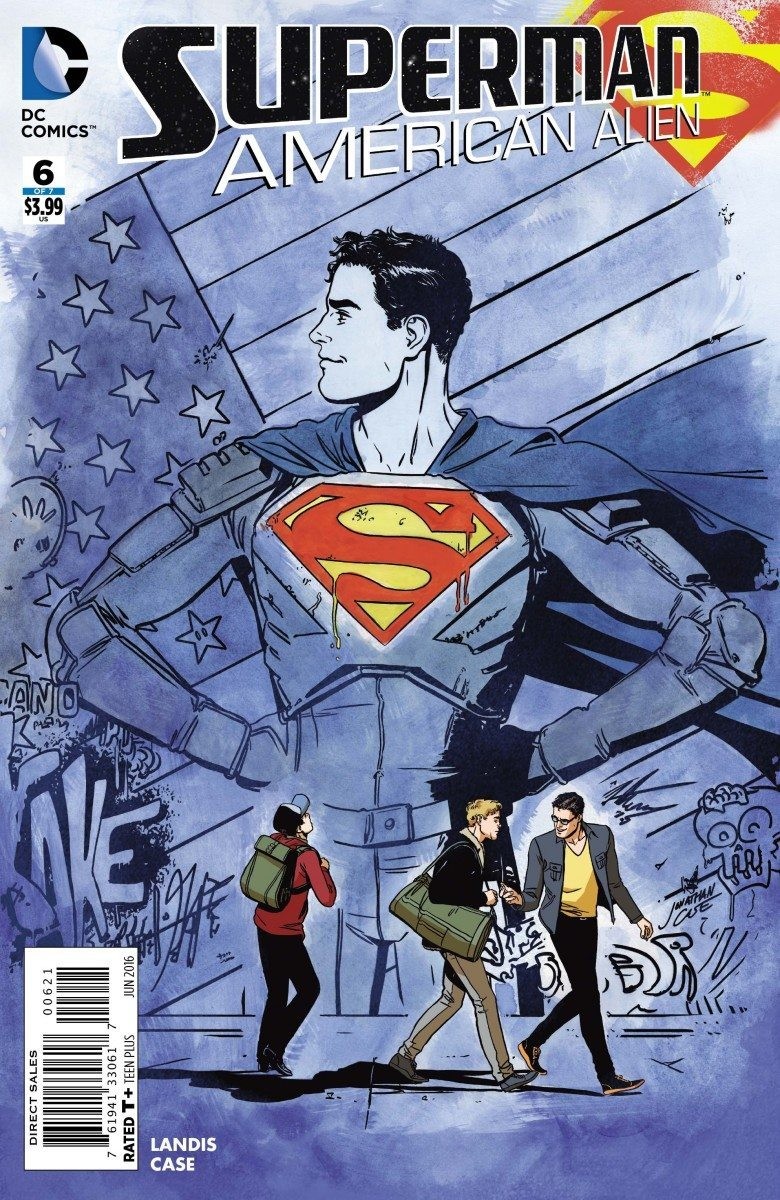 This issue is a great follow up to the action-packed issue 5, which featured Superman battling for the sake of the city. Following a larger, more action-“set-piece”-based issue, #6 is dialogue and character heavy, which is something Landis truly excels in writing. The basic plot of the issue follows Clark’s childhood friends from Smallville, Pete and Kenny, coming to visit him in Metropolis and catching up. Clark brings them around his fancy big city friends at an art gallery party, hosted by artsy photographer Jimmy Olsen, with many of his photos being up for display and sale.

READ: Check out our review of Superman #51, the most recent installment of his solo series!

Landis gives readers an interesting new take on the character of Jimmy Olsen, making him an art photographer as opposed to a newspaper photographer. Landis has said himself that his version of Olsen is black and “very probably gay,” continuing the awesome recent trend of representation in mainstream comics. Land’s version of Jimmy Olsen is awesome and refreshing (despite already having a black Olsen currently on television in CBS’s Supergirl).  We even get cameos from other DC side characters I won’t spoil, but I will say this: the way they are used to further the narrative of the issue and contribute to Clark’s growth and identity is cool and different. 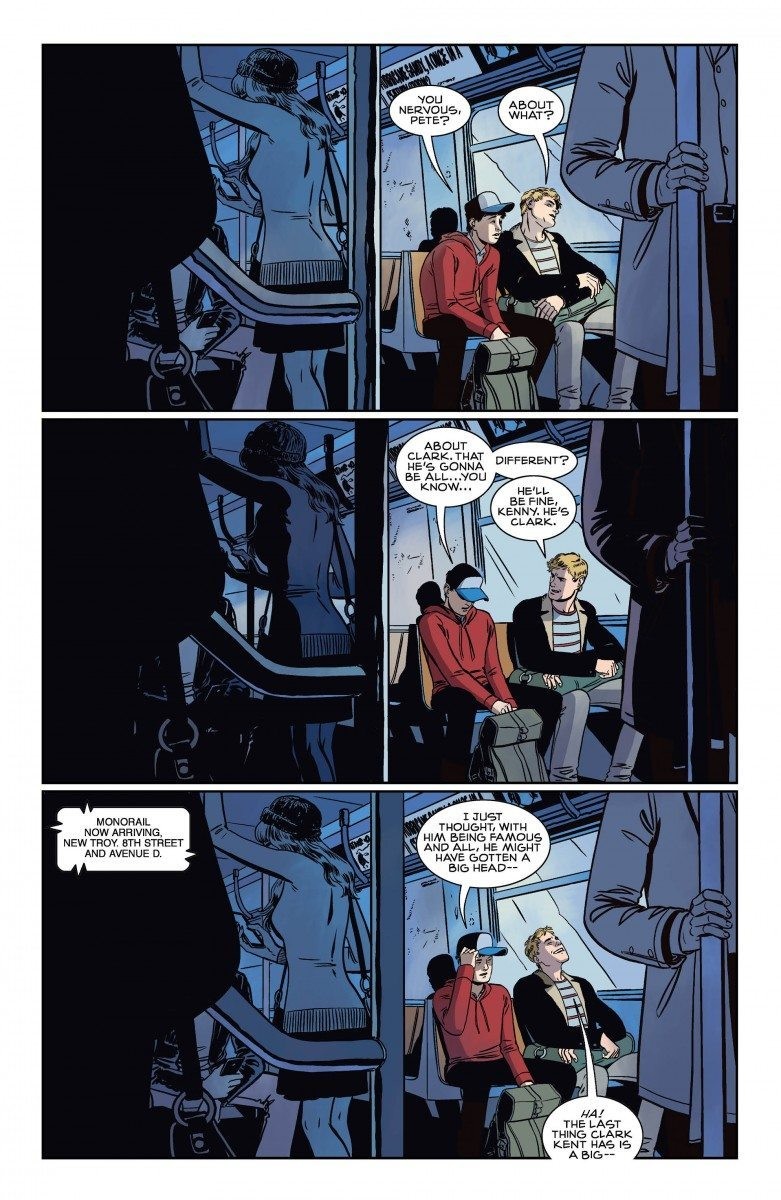 The art of this issue is provided by Jonathan Case, best known for Batman ’66. Case definitely brings some of that colorful, campy, almost Archie-like flavor to this issue, and it undoubtedly works well. He really shines with some of the “art” within the narrative of the issue. For example, we see a really cool Superman poster posted all round Metropolis as the notoriety of the hero rises. Of course, the artwork featured in Jimmy Olsen’s art gallery is also fun and interesting. 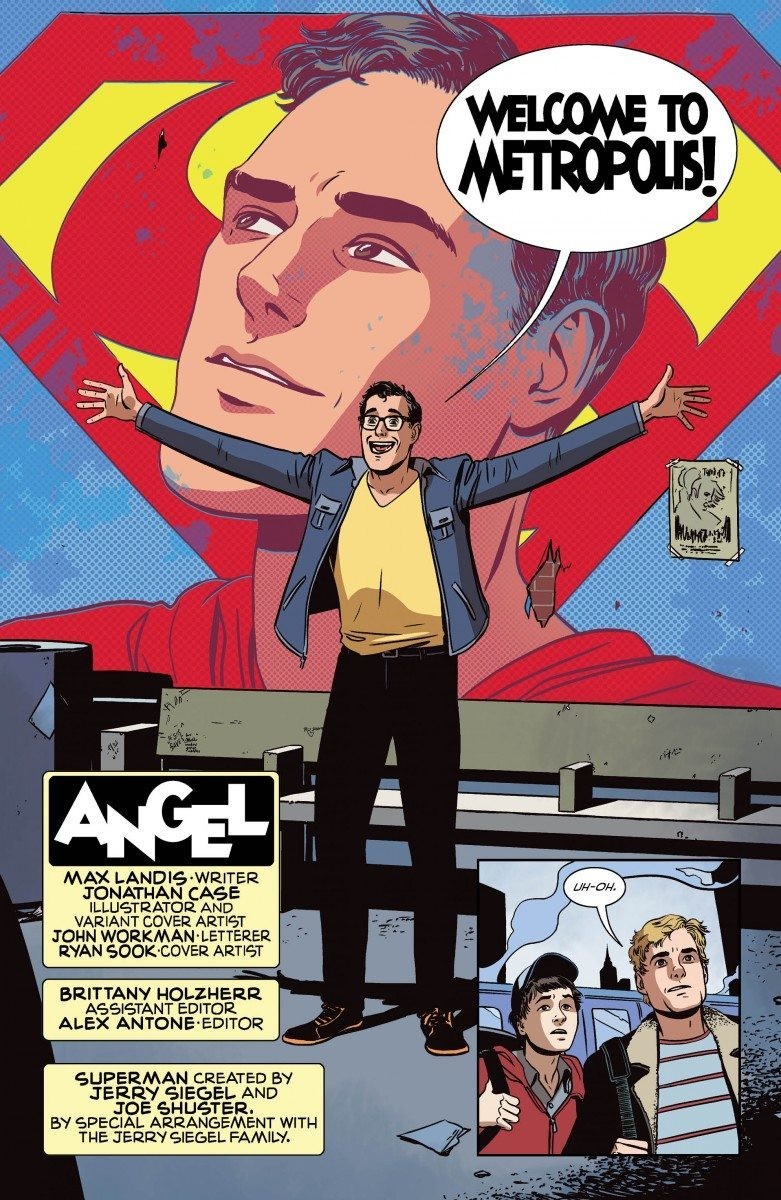 Unlike the last issue, we don’t have any large action splash pages. The focus of this issue are the conversations and emotions coming from the characters as they discuss these introspective identity issues. Case gets to play around with facial expressions as we see Clark and his friends express a range of emotions during their trip to Metropolis. Case’s style lent itself very well to the story, but the star of the issue and the series has been Landis’s character development and storytelling. 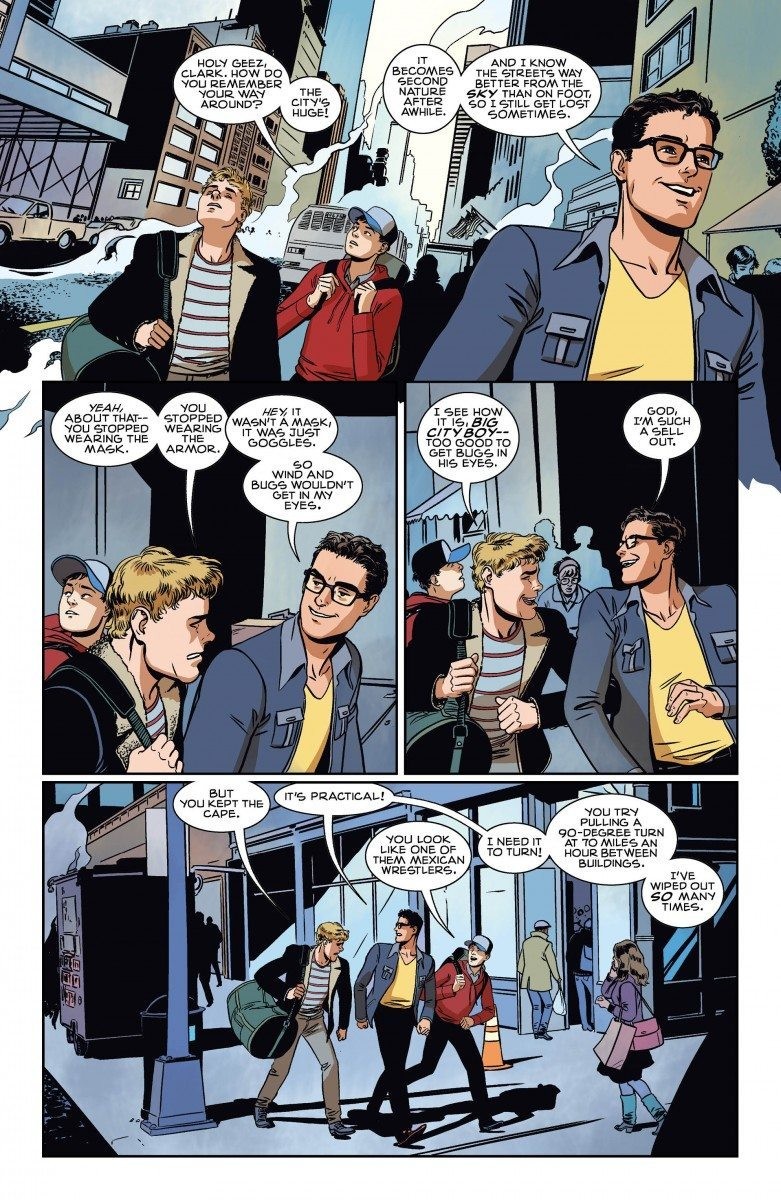 The conflict in the issue begins when Clark and his friends begin discussing his identity and, more importantly, the “whys” of Superman as the popularity of the hero increases all over the city. Landis approaches the conversations with reverence and force. He manages to keep Clark’s heart in the right place, while simultaneously depicting him as a flawed and realistic person. The central conflict of this issue forces Clark, and subsequently the readers, to truly think about why Superman does what he does. If he were to exist in the modern era, what would be the driving force behind his actions? Landis has said many times that the reason he loves Superman is because he isn’t a character that is like most other popular superheroes. 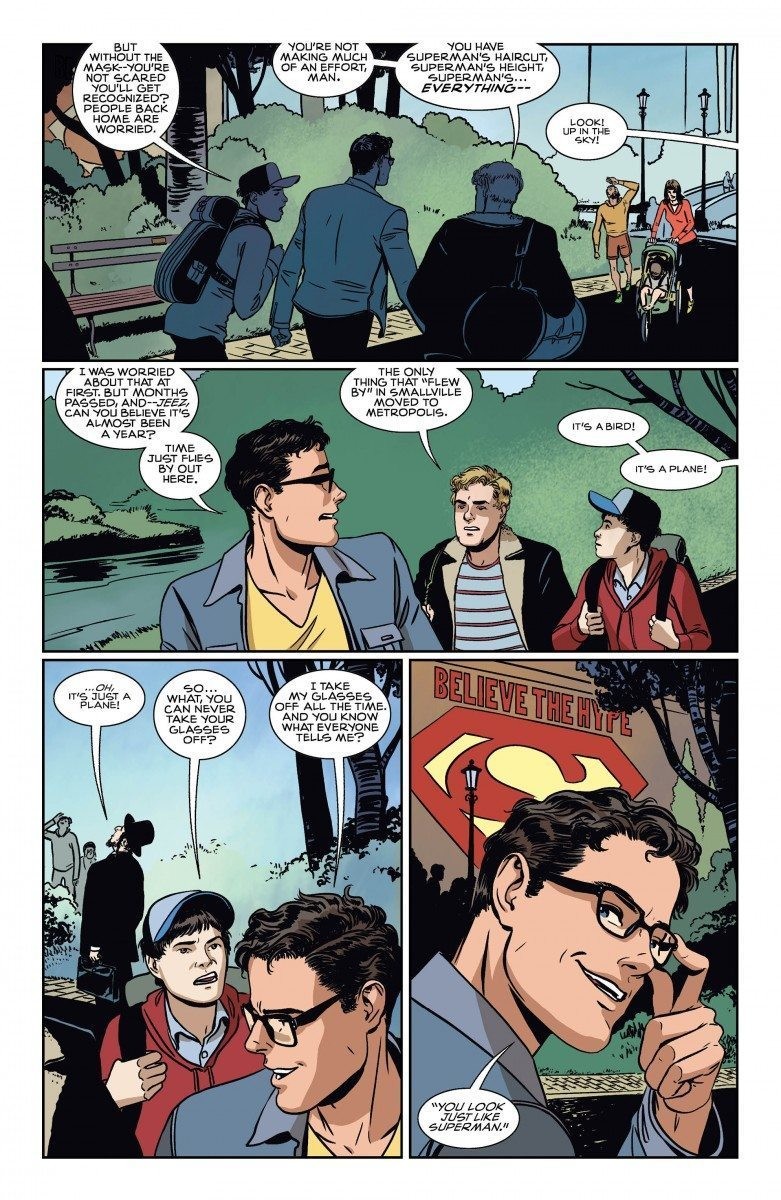 He doesn’t have a tragic backstory; the death of his home planet happened before he was a conscious individual, his parents weren’t murdered in front of him. He’s just a guy with all the best powers who chooses to use them for good. It’s awesome to finally see Landis, who is mostly known for film, write the character in his original medium after hearing him talk so passionately about him in his youtube videos, and he has not disappointed yet.

READ: If you missed our review of AMERICAN ALIEN issue #5, here it is! Check it out!

Though this issue is light on the action, if you love Superman and are interested in the character, Landis has written a truly awesome version of Superman. I, for one, am excited to see what he has planned for the conclusion of his run in issue #7. Issue #6 is a great character study of Superman and is available now. Go check it out!