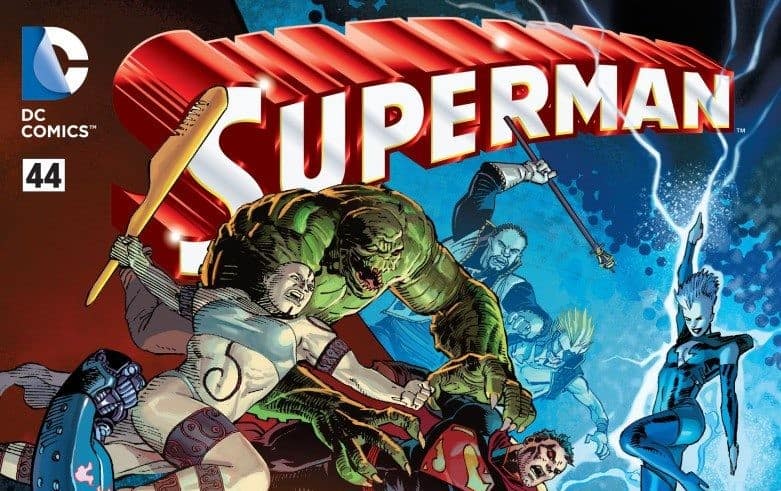 With Superman’s secret identity revealed, everyone Clark Kent has ever known is in danger!

The Royal Flush Gang (among others) go after Clark and his loved ones. Despite his weakened state, Superman takes them all down and saves the day, but has he changed more than just physically? What lengths will this new Superman go to to save those he loves?

Subtlety has never been Superman’s strong suit, but that works as a character flaw–not a writing flaw. Whatever interesting questions this issue has to ask (of which there are few) are hammered over your head until you get it. If that’s not off-putting enough, there’s nothing else particularly interesting happening. Superman gets into fights, he makes some ham-fisted declaration to his enemies, and the plot sloppily ties itself into the events of ACTION COMICS. Add in some clumsy (and potentially offensive) attempts at racial and gender commentary and you’ve got yourself an issue that features more groans than thrills. I had to read it again to write this review because I practically forgot what happened immediately after turning the last page.

READ: INDEED, NOT ALL OF US ARE FASTER THAN A SPEEDING BULLET. FIND OUT WHY DISABLED HEROES ARE IMPORTANT IN COMICS!

It seems John Romita, Jr. is just as eager to forget this arc, too: maybe he’s been drawing Superman too long and he’s tired, because his art certainly seems that way. The designs and settings are lazy, the spacing and perspective is off (there’s one jarring panel where Lois seems large enough to eat her father’s head), and there’s very little consistency.

One saving grace is the colors. Each page has its own pop, with rich, sharp tones, and enough variation to give everything much-needed depth. Flip through the book and rarely will you see a unifying color scheme repeat itself. Sometimes that’s not such a great thing, but here it’s a welcome breath of fresh air every page.

READ: ANOTHER IDENTITY REVEALED IN BOOK OF DEATH #3!

The idea of ACTION COMICS moving forward and SUPERMAN looking back was dubious to begin with, and it seems everyone’s now caught up to that idea and just wants this arc to be over. It was satisfying for me to see Clark Kent move into a motel–the kind of motel he’s in at the start of this arc of ACTION COMICS, but not necessarily for any thematic or visual tie-in. I was satisfied because it could mean that SUPERMAN is catching up to ACTION COMICS and this can all be over.

I’ve had a hard time recommending SUPERMAN as anything but supplemental reading–despite the what-now-seems-to-be-a-fluke bright spot that was SUPERMAN #43, and SUPERMAN #44 is worse than that. If it’s really important to you to know what happens, by all means, knock yourself out–but maybe just stand in the comic book store and read it? Don’t buy it?