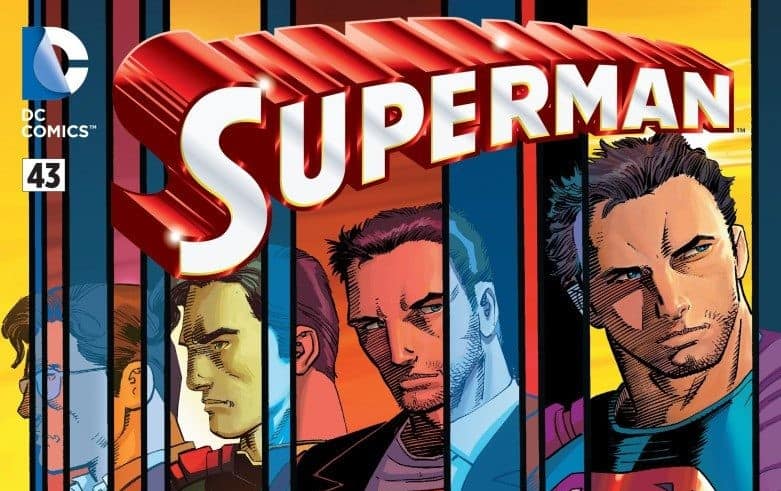 HORDR_ROOT lives! Can Superman save the day and protect the identity of Clark Kent?

In the aftermath of the destruction of HORDR, Superman’s powers seemed drained even more than usual. Lois takes the opportunity to double-down on her vow to protect Superman, but her gamble may end up costing Superman more than he can bear!

Gene Luen Yang made me eat my words!

Okay, he doesn’t know who I am, so my words may not mean anything to him, but based on how I felt about SUPERMAN #42, SUPERMAN #43 is a pleasant surprise! After the big and seemingly unnecessary action-packed second half of SUPERMAN #42, #43 downshifts hard and gives us a character-driven issue with a big payoff.

With the first half taking place practically entirely in Lois’ bedroom, SUPERMAN #43 is refreshingly intimate and therefore all-the-more rewarding. Clark and Lois take time to at the very least name all the problems within their relationship, while ultimately revealing a love and affection that, in my mind, encapsulates their bajillion-year comic-book history together. Even the Condesa/Jimmy flirtation that seemed so forced last issue is given time to breathe and feel organic this time around!

This is a Superman comic, however, so Hulk’s gotta smash something! I would think the action sequences a rude interruption for all this great character work if the action here weren’t so bolstered by that same character work, and if the fallout from that action weren’t so rich in consequences for these characters. As was my hope with ACTION COMICS #43 (a hope that didn’t quite pan out), SUPERMAN #43 makes good on a promise to engage in an ideological battle between Superman and those he protects: for both Superman and Lois, protecting the world and protecting the other are two separate things. It makes sense that Lois would choose Clark, the close friend she loves, immediately over the greater good, but… what would Clark do? What would Superman do?

These questions aren’t answered, which is okay, because they’re arrived at organically within the dialogue of the issue and lie in the subtext. In my book, that deserves a gold star.

I’d give a gold star to John Romita Jr.’s work, too… if it existed in a different comic.

I really do enjoy Romita’s work. I can’t praise enough what he did with Captain America in Dimension Z, but his style seemed to work so much better in that world. The disconnect between his pencils and Yang’s words is too great for me to ignore. Romita’s style is at home with Darwyn Cooke, and Chris Samnee, and even Humberto Ramos–near the cartoon end of the spectrum. That isn’t to say a cartoon style versus a more representative, realistic style is bad–not even close–but what made Romita’s work on Captain America, well, work, was that the stakes of the story contrasted so sharply with his lighter, more inviting style, revealing so many more truths about the characters in that contrast.

Additionally, because this arc of SUPERMAN functions, to me, as a supplement to ACTION COMICS, because the stakes aren’t exactly life and death, and furthermore because the tone shifts so frequently, Romita’s work seems adrift. It is a bold and consistent style centered on a story whose tone and stakes fluctuate wildly. The art isn’t given a chance to set itself off against a core idea. Romita is failed by Yang’s story, but at the same time, Yang is failed by SUPERMAN essentially being set up as supplemental reading material. You have two artists with strong voices strangled by circumstance.

Because they get to work within pre-established contexts, though, the inking and coloring team (Klaus Janson & Scott Hanna and Dean White, Leonardo Olea, & Blond, respectively) come out as unsung heroes. With their work, textures come to life, the world feels tangible, and your eyes want to consume each page.

That all said, SUPERMAN #43 sounds like a mess, but it isn’t–it’s a victim of circumstance. It’s three separate teams of creators trying and–through no fault of their own–failing to come together. They’re working on a story arc that was handicapped out of the gate, and have been playing catch-up ever since. Their efforts to make the arc stand on its own are so strong, however, that the issue works, and works well. Even given my disappointment with the last issue, I now eagerly await SUPERMAN #44.

CAN’T GET ENOUGH DANNY! NEITHER CAN WE! CLICK HERE FOR MORE!