“Black Dawn” has been an extremely intense arc, and there have only been three issues! SUPERMAN #22, however, doesn’t continue the same level of intensity that the previous two issues had. This isn’t to say this installment is bad, but it’s simply lacking in comparison. It’s an issue that mostly consists of added plot, but the reveal isn’t too great and is rather vague. It focuses on Lois and follows her on what she’s doing throughout all this. It’s not, however, exciting enough for us to fear for her life. Nor is it exciting enough to end the issue the way it does. We still get some awesome moments from her and it should be interesting to see where this takes us.

The “Black Dawn” story arc has somewhat left Lois behind on all the action. Perhaps, SUPERMAN #22 is supposed to remind us of Lois and use her to progress the plot, although there wasn’t much plot to progress here. We get a slight recap through her inner monologue of the arc so far, even though it’s only been three issues now. Then, we finally get a noteworthy reveal that members of the town are also involved in the surveillance and interference of the Kent household. From here, the issue turns into a classic horror flick. The town is out to get Lois, only she knows the truth, and now she must use her wits to fight against them! 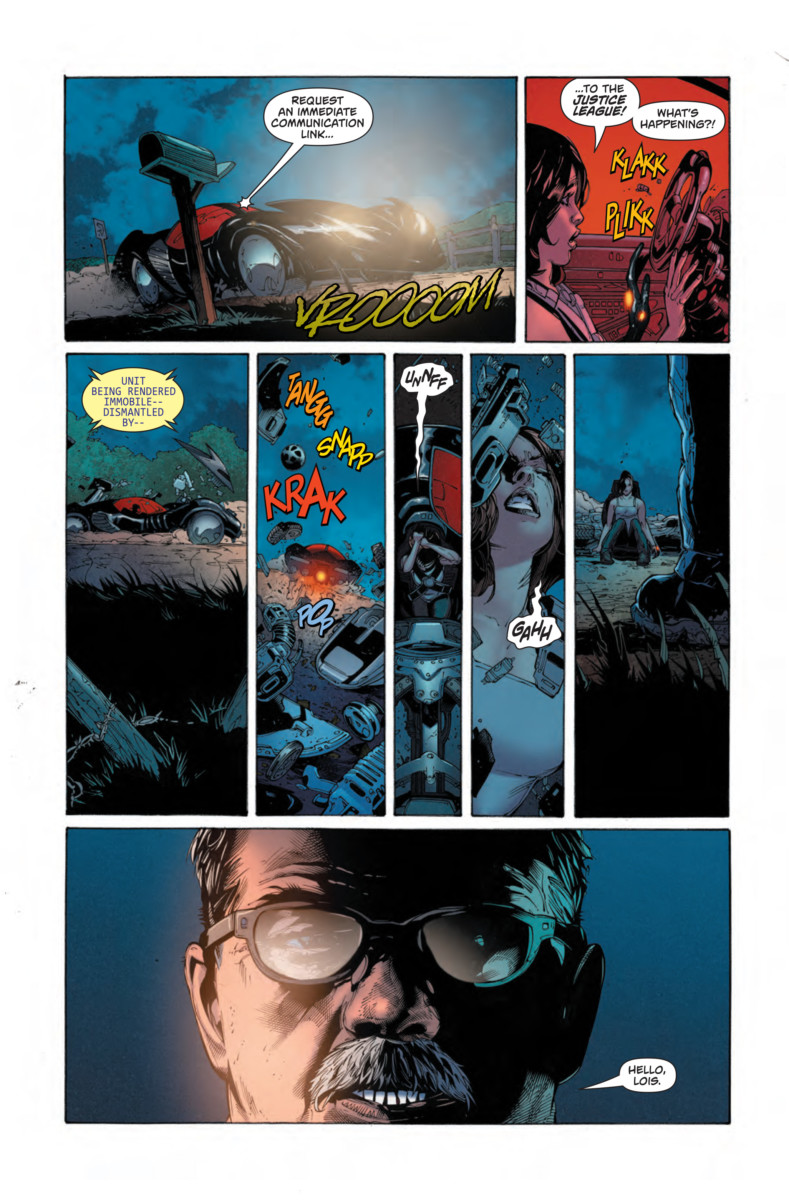 The problem here is it’s nothing new. It’s classic. Lois Lane has reverted back to being a plot device, like how the protagonists of old horror films are. This isn’t to say she’s a damsel in distress, but rather she’s used in this issue to simply provide vague exposition. One of the great things about the SUPERMAN Rebirth series is how refreshing and new everything was. In the very first story arc with the Eradicator, we saw Lois actually fight the villain. Hell, she even rocks the Hellbat Batman suit back in SUPERMAN #5! She still does rock some Batman gear in this issue, and that redeems some of the choices made here. Yet this only occurs near the end of the issue. Before that happens, we simply watch her live out a horror film where members of the town follow her home, attack her, and she fights back. Classic.

READ: Curious to see how the Kents teamed up and defeated the Eradicator? Take a look at our review of SUPERMAN #6!

A Shine of Redemption

As mentioned before, Lois utilizing some more Batgear is sweet and fun to watch. It continues to embody that horror film aspect, but with the superhero twist to it. The art also helps redeem the issue as a whole. Artist Doug Mahnke has such an intricate style that brings these characters to life. There’s an incredible attention to detail with all his line work and helps brings the fear we should be feeling alongside Lois. The color palette as well was an interesting, but smart, choice. As we saw in SUPERMAN #21, and now in SUPERMAN #22, the series has taken a dark turn which calls for a darker tone. This is achieved through the very notable difference in the use, or lack, of color.

READ: Want to catch up and know what we think of “Black Dawn?” Take a look at our review of SUPERMAN #21!

What To Say About SUPERMAN #22…

Twenty-Two issues into the SUPERMAN Rebirth series, writers Peter J. Tomasi and Patrick Gleason have set themselves with an impossible task. They’ve created a very high standard that won’t be reached or surpassed with each new issue. That being said, SUPERMAN #22 is definitely lacking in comparison to the previous two installments for the “Black Dawn” story arc. Using Lois Lane as a plot device by simply revealing more of the story through unexciting means, and ending the issue with a reveal that probably should’ve been the opening of the next one. There isn’t much that leave us with mouths watering like previous issues. Thankfully, Mahnke brings his A game here with solid art that shines and keeps the reader visually stimulated. I believe it’s safe to say we’ll get more bang for our buck next time, but SUPERMAN #22 is one of their least impressive issues.