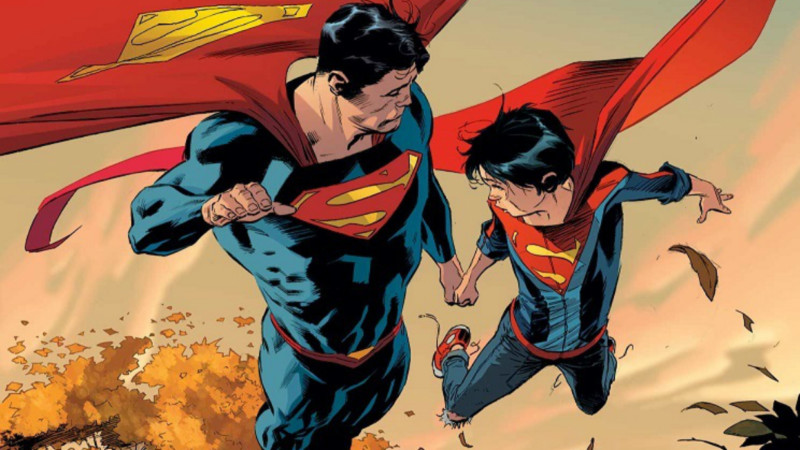 Spoiler Warning: This review analyzes and speculates the events of SUPERMAN #21.

After the events of “Superman: Reborn,” writer Peter Tomasi decided to bring a more personal threat to the Kent family in SUPERMAN #21. Once again, a new threat has invaded the Kent household. This mystery threat has now pulled Robin into the mix as well. With Batman out of the picture, it’s easy to feel like we’re never going to get to the bottom of this. Like Jon, however, we must simply be patient.

Right off the bat, we find ourselves high in the air alongside Jon as he’s about to declare: “UP! UP! AND AWAY!” It’s only a dream, but possibly foreshadows it will become a reality soon enough. Afterward, the first portion of SUPERMAN #21 almost feels like a SUPER SONS issue in disguise. We get the great bantering, or bickering, between Jon and Damian that we typically get in SUPER SONS. Damian, however, is in Kent territory now. Meaning, we get to see a slightly more tamed version of the loud-mouthed Robin we love so much. After the last issue, the reader is led to not trust the friendly neighbor Cobb anymore. He decides to stop by that morning with Kathy, his granddaughter. All seems well with Cobb, which only makes us more suspicious of even his presence.

As Cobb and Kathy leave the Kent household, Cobb playfully speaks to Krypto but reveals he has him under some sorts of mind control. Right after, we get a look at our new villain,  a black figure, monitoring them through the eyes of Krypto. This is huge but isn’t the biggest reveal of SUPERMAN #21. This begs the question whether Cobb is simply under the same mind control, or if he’s willingly fighting for our new mystery character? The SUPERMAN series has been known to blend its different moods with ease, and this reveal simply changes the calming tone from the last issue into a complete horror mystery. Who can be trusted anymore? Moving forward, Superman takes Superboy and Robin with him on their search for Batman. In revolt, our mysterious villain creates a distraction by sending the same squid from SUPERMAN #2 to delay their search.

READ: Last issue, the Kent household had both an unexpected guest and turn of events — read about the mysteries at hand in our review of SUPERMAN #20!

This is the turning point of SUPERMAN #21, where it showcases the chemistry between Robin and Superboy. Although, after the fight, the issue stops acting like a SUPER SONS installment and shifts the story back to our mystery. Eventually, Superman is confronted by our mysterious villain. It’s an intense moment where artist Patrick Gleason gets to showcase his attention to detail. Completely embodied in ink, Superman is dumbfounded as our mystery villain reveals himself.  With the town in danger, Jon feels a great sense of urgency. As the squid makes a swing at some civilians and his father, Jon doesn’t hold back as he unleashes his heat vision. It’s a strong moment that Gleason portrays beautifully in his art. Jon is a child, and Tomasi and Gleason do their best to make us see the situation as such. The complete rage in Jon’s eyes strikes fear into the readers. 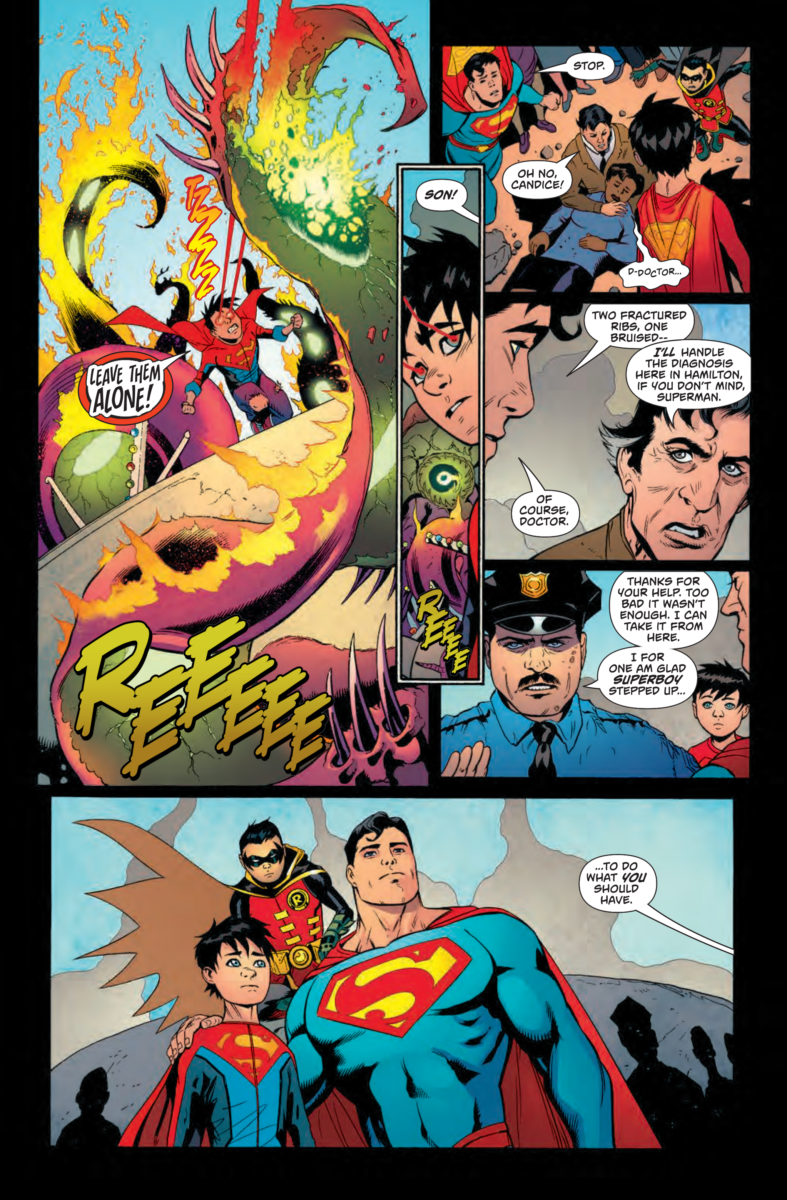 It’s still too early to speculate about Jon’s future, as he still doesn’t have full use of his powers. SUPERMAN #21 raises these concerns as Clark and Jon discuss it afterward. Through the amazing dialogue by Tomasi, we can see that both father and son are scared. As the optimist, Clark won’t say anything remotely negative, or even realistic, especially with the focus of the discussion on his son. Jon is simply afraid because no one knows what’s happening to him, and as a child the unknown is terrifying. Superman decides he’s going to investigate Deadman’s Swamp, the exact location Jon and Kathy lost themselves in SUPERMAN #17. Clark sternly insists that he’ll be going alone. This only underscores his fears for Jon even more so.

Things Get Even More Real

As we see in SUPER SONS, regularly, Jon and Damian find themselves in another argument. This time on whether or not to continue searching for Batman, even though being told to stay put. The fight comes to an abrupt stop when Kathy lifts Damian into the air with telekinesis! It’s a terrifying page to turn to in SUPERMAN #21, and it leaves the reader completely shook. The single page of this really delves deeper into a darker tone. It truly leaves the reader questioning who can be trusted anymore. Again, out of rage, Jon blasts his heat vision in Kathy’s direction but she deflects it with her powers. In the rising flames, Kathy ensures that if Jon doesn’t calm down “he” won’t let Superboy use his powers anymore.

READ: Is Superman still culturally relevant? Read our analysis of why he is and always will be.

This is the grand reveal; it drops jaws, it widens eyes, and it begs the ultimate question: Is Doctor Manhattan involved? Could he be the “he?” Is he possibly manipulating the Cobbs? Although, Kathy could’ve only been speaking of our new mystery villain. Gleason’s art and the dark color palette brings this moment to life. The final smile Kathy leaves us with strikes fear not only into Jon but the readers as well. Gleason successfully expresses the shock and fear of what’s at stake here in the last two pages. The noticeable change in color palette leaves the reader with the impression that things are getting dark.

From what started as an intimate story of family, SUPERMAN is now, probably, the most important Rebirth title to get. As of late, we’ve seen this series become more tied to the Rebirth mystery than any other title. These past two issues have raised more questions than any of the past arcs. SUPERMAN #21 has also brought much needed focus onto Jon, who technically should be as powerful as his father already. Has Doctor Manhattan finally decided to directly attack the Kents? Are Tomasi and Gleason toying with us? As said earlier, it’s hard to speculate about Jon’s future, but that’s what makes for such great storytelling. Like Jon, we’re left in the dark of what to expect, and it’s a scary thing to think about.

SUPERMAN #21 is yet another great installment in the SUPERMAN series, and it’s a perfect example of why this is probably still the best Rebirth title out there. With twists and turns, and questions hanging, this was a stellar issue all due to Tomasi and Gleason. The dialogue is executed well, and the art subtly creates a darker tone for the series. All while reminding us that this series is still about Jon growing into the role of Superboy and, one day, Superman.