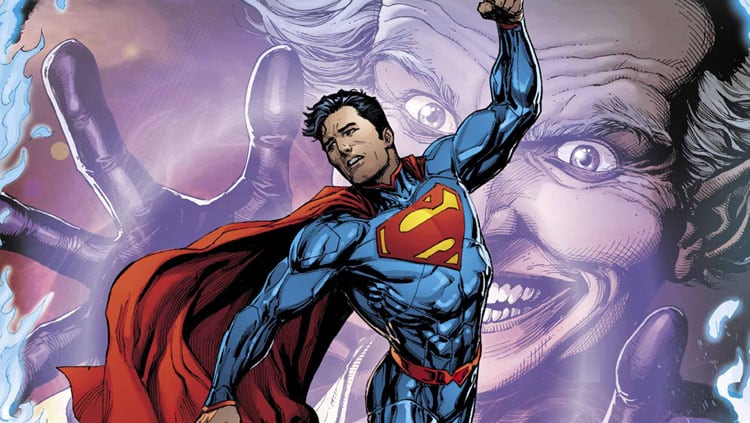 The mysteries of the “Superman Reborn” story continue to unravel at a rapid pace. After ACTION COMICS #975’s blindsiding revelation that the fake Clark Kent was actually Mr. Mxyzptlk in disguise, SUPERMAN #19 drops another big hint about the Rebirth Superman’s identity. The revelations are the icing on the cake for an issue brimming with action, suspense, and heart. Read on for the truth about Superman – be warned that SPOILERS follow! 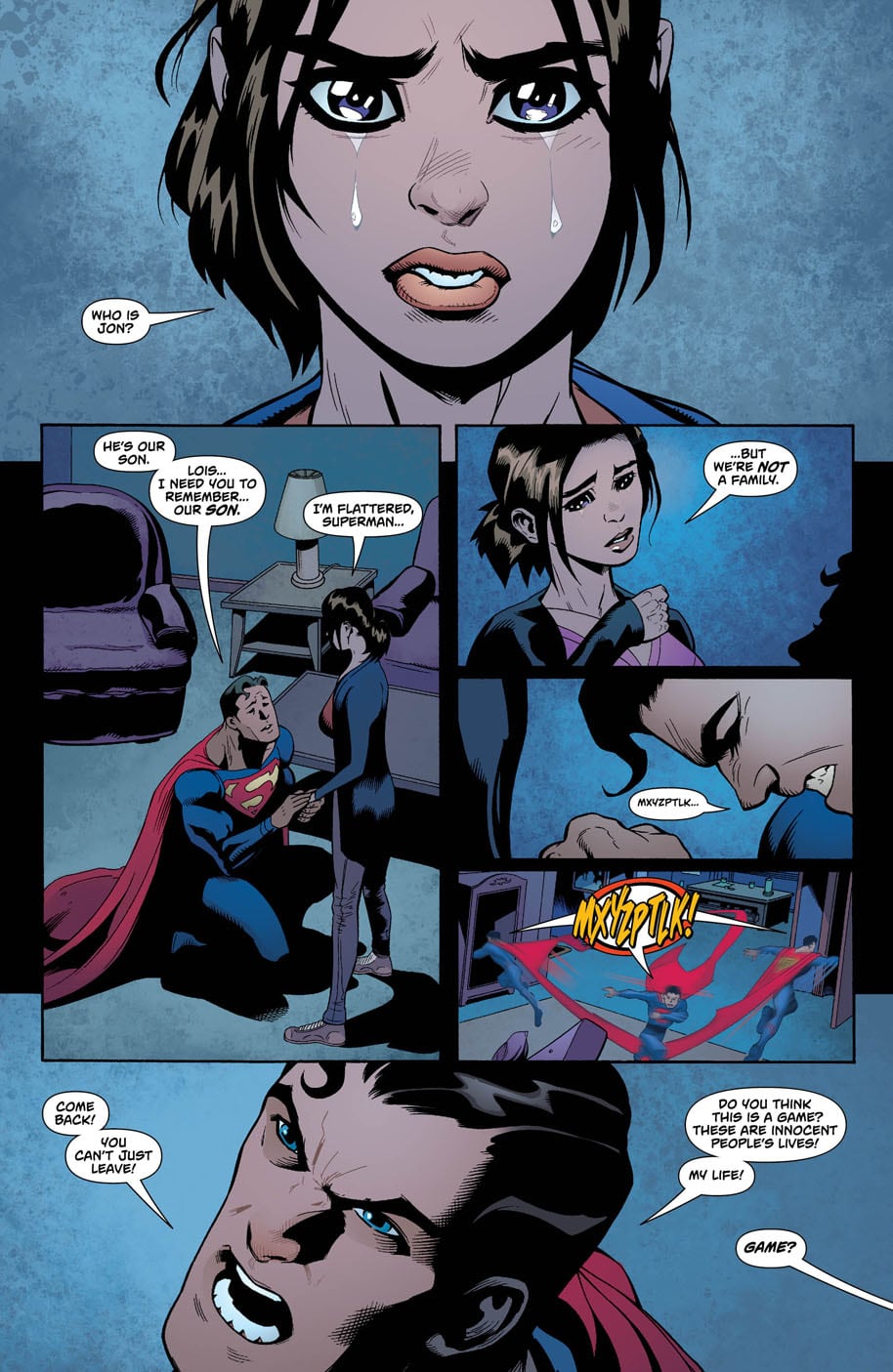 Thanks to Mr. Mxyzptlk’s big mouth, Superman learns that he may have been split in two. This revelation comes as Superman and Lois enter an inter-dimensional space in an attempt to retrieve their son, Jon, who the mischievous imp imprisoned. Superman must ascend a game board version of the Daily Planet building to retrieve Jon before the memory of his son is wiped out forever. Along the way, Superman is shown visions of his fallen New 52 counterpart which, along with Mxyzptlk’s teasing narrative, suggests the Supermen’s split identity. Jon meanwhile, encounters the essence of the departed New 52 Superman and Lois Lane in the form of red energy. This energy joins with Jon in order to reunite him with his parents, setting up the story arc’s conclusion.

The pace of the “Superman Reborn” arc has been thrilling, and this issue continues the trend. I initially found the revelation that Fake Clark was Mxyzptlk a bit of a letdown, but once the full backstory of this transformation was revealed, it became fascinating. A large part of the intrigue came from the hints at Mr. Oz and Dr. Manhattan’s role in Mxyzptlk’s imprisonment, escape, and transformation. Those hints continue in SUPERMAN #19, as we learn that Lois and Superman have been metaphysically “tinkered” with. Gee, I wonder who could have done that? Also, Superman is quick to point out that the inter-dimensional space they’re currently inhabiting is very, very blue. Mxzyptlk is quick to change the subject, suggesting that he could be complicit in Manhattan’s schemes. Odd, considering Mxyzptlk was imprisoned by Mr. Oz, but perhaps there are chunks of the story that the scheming imp purposefully left out.

Though we have yet to learn the full details of how Superman could have been split in two, the almost-confirmation of this long-held theory is tantalizing, especially given how the issue ends, with the New 52 Superman and Lois Lane’s triumphant return from the red energy. My guess is that we’re going to see an epic meeting of the Supermen next issue, and a final merging between the dual Supermen and Lois Lanes. Delivered in the context of the issue’s whirlwind action, the revelatory moments are juicy, digestible pieces on Mxyzptlk’s game board with Superman. It’s usually in ACTION COMICS where we find this kind of breakneck pacing, but here writers Peter J. Tomasi and Patrick Gleason accelerate their usually more explorative and cerebral style to emulate the vibe of ACTION COMICS. The effect is a satisfying streamlining that makes this crossover feel so cohesive. 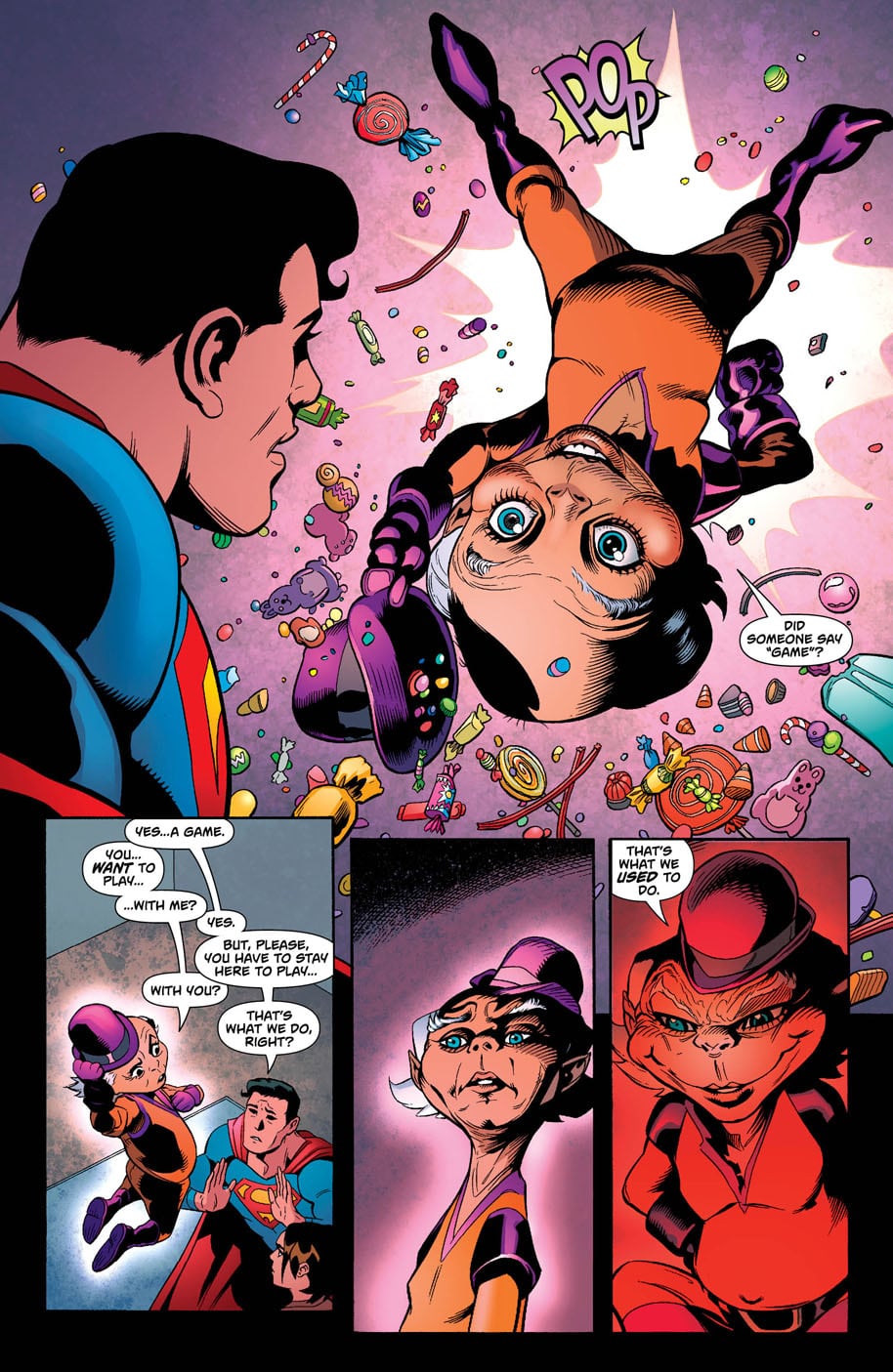 But the writing duo also does what they’re best at, bringing heart into the Superman family. After the extremely powerful scene where Jon was ripped from his family in SUPERMAN #18, Tomasi and Gleason continue the emotional trip as Superman and Jon desperately try to get back to each other. Though Jon and Superman technically don’t share any scenes together, the bond that’s been established between them here stands stronger than ever. Superman needs to find his son before his memory vanishes forever, and the urgency is palpable. It’s hard to combine breakneck action with an emotional core, but Tomasi and Gleason pull it off like expert craftsmen.

READ: Before “Superman Reborn,” there was “Multiplicity!” Check out this smorgasbord of Supermen in our review of SUPERMAN #16!

The most jarring element of any crossover is usually the artwork, and that remains true here, as artist Doug Mahnke uses a distinctly looser style than ACTION COMICS’ Jaime Mendoza, especially in his figure work. Considering most of this issue takes place in an inter-dimensional space, the more flexible design work helps to achieve a reality-bending quality. Mahnke creates a very creative design of a faux Daily Planet mounted atop a Candyland-inspired game board. Even the distinctive Metropolis skyscraper is made out of candy. The inspired world design meshes well with the characters’ facial work, displaying a range of emotion crucial for expressing the heart of Tomasi and Gleason’s script.

Overall, SUPERMAN #19 is a terrific treat, filled with action, emotion, and satisfying revelations. The SUPERMAN and ACTION COMICS teams have worked amazingly well together to create the quintessential payoff arc. Now that most of the secrets are out of the bag, the only thing that remains is to watch the New 52 and Rebirth Superman come together. Though the result may already be telegraphed, it’s still going to be a landmark event in the history of Superman. It’s all going down in ACTION COMICS #976, when Superman will finally be reborn.