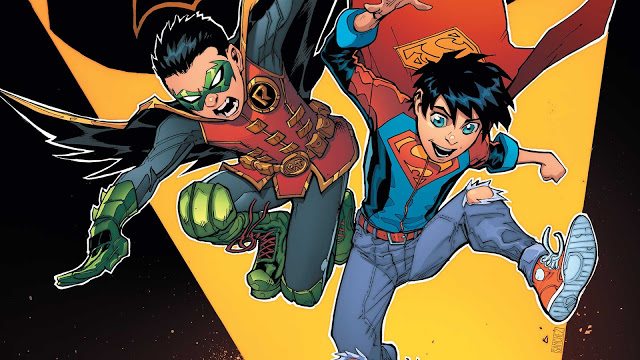 Peter J. Tomasi and Patrick Gleason’s run on DC’s reborn Superman has been distinctive for its charming ‘slice of life’ narratives. The recent Eradicator and Dinosaur Island arcs were notable for their strong characterization and emotional core. The glue that held these stories together was the bond between Superman and his son, Jon, aka Superboy. Superman #11 continues that trend, but swings the focus to Jon and his new companion, none other than Batman’s son, Damian Wayne, aka Robin.

In this conclusion of the “In The Name of The Father,” two-parter, Damian and Jon must complete a series of three trials set out by their super hero fathers, in order to test whether the two budding heroes can successfully work together. Of course, things quickly go awry, as the action jumps from one thrilling setting to another. The mission starts at the top of an arctic mountain, and things immediately go wrong as Jon accidentally causes an avalanche with his heat vision, much to Damian’s annoyance. But the fun doesn’t stop there, as the two unlikely allies quickly find themselves on a runaway train hurtling toward a cliff, with Robin’s unruly pet, Goliath, as a stowaway. From there, the two wind up fighting over how to deal with a simple tornado, and eventually begrudgingly come together to battle a freak mutant hybrid.

READ: Discover the action-packed finale of Superman Rebirth’s first arc in our review of SUPERMAN #6!

The story is simple, good-natured fun. Nothing monumental in terms of overall universe building, but the real treat is getting to witness Damian and Jon’s banter and competition. Much like their fathers, the two could not be less alike. Damian, with his verbally abusive wit, is great fun stacked against the wide-eyed and hopeful Jon. Pete Tomasi, after having shown great skill in characterizing Jon, proves to have an equally strong hand at writing Damian. The delineation between the two is clear, with Damian’s intellect and sharp battle tactics at odds with Jon’s tenacity and moral instinct.

Superman and Batman are woven into the story sparingly, guiding their sons through the challenges from afar without their knowledge. But their presence looms over the two young heroes. As Damian and Jon struggle to work together, nearly even coming to blows, we can’t help but be reminded of the contentious relationship of their fathers. Tomasi and Gleason cleverly keep the two heroic giants in the background, letting the Super Sons take center stage, and also nicely setting up their eventual spin-off, releasing early next year.

The art by Gleason is a bit of a mixed bag. The full-page panels pop vividly, especially in moments showing Damian and Jon striking classic action poses. The two characters are represented very nicely, with acute attention paid to the distinctive differences in their stances and expressions. Special mention must be made of colorist John Kalisz for highlighting these full-pagers with bold, popping colors. The red and blues of Jon’s uniform particularly jump off the page. Unfortunately, the art starts to take a dive during the action scenes, particularly when several small panels of action are crammed onto a single page. It’s a bit distracting when key moments, such as Jon and Damian’s fall from the flying Goliath’s back, become a bit confused due to the lack of adequate space. It becomes something of a struggle to make out the full scope of the action.

READ: Fly on over to DC’s other Superman title in last week’s review of ACTION COMICS #967!

Tomasi and Gleason have continually produced one of the best books in the Rebirth lineup, without a single bad issue in the bunch – and they show no sign of slowing down. Overall, Superman #11 is a terrific addition to the Superman series. With the book’s usual penchant for terrific characterization, an awesome Robin guest appearance, and a clever focus swap from father to son, SUPERMAN continues to soar.