After months of anticipation, Brian Michael Bendis’ debut on SUPERMAN #1 is finally here! In the follow up to Bendis’ MAN OF STEEL, Clark Kent finds himself in the midst of a crossroads. After discovering Rogol Zaar catalyzed Krypton’s destruction, the two engaged in a fierce battle. The fight resulted in Superman losing all modes of communication with his family in addition to Rogol Zaar’s banishment to the Phantom Zone.

Now, Superman must find his way back home alone.

The first installment of the Man of Tomorrow’s latest series brings new possibilities to the character as he considers becoming a leader of the world. Unfortunately for Superman though, that possibility is only one of many challenges that arise. From the return of old threats to the loneliness of an empty home, Superman must make it through this crossroads before time runs out. 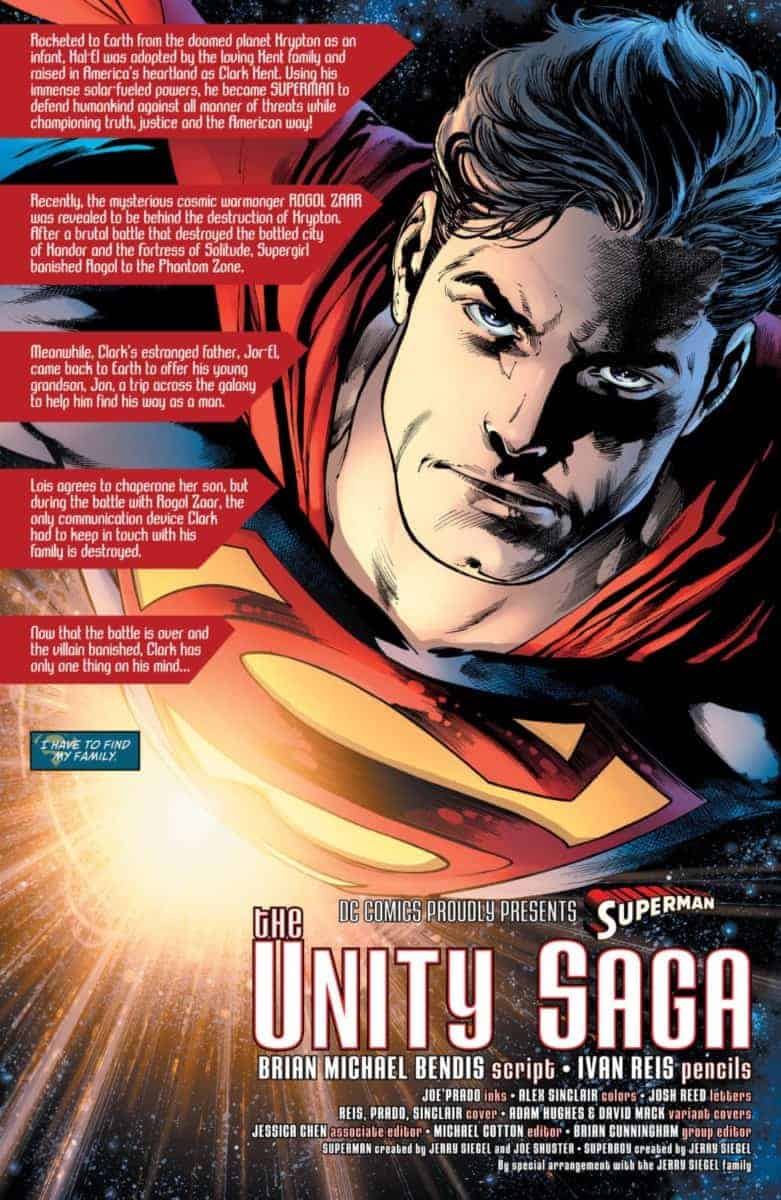 The Revenge Of The Phantom Zone

SUPERMAN #1 opens with a lost hero. The Man of Steel is literally lost in space following the battle against Rogol Zaar. During his trek home, he gets sidetracked by yet another noble mission: stopping an invasion of Earth by the Dominator Armada. The success of thwarting the invasion pleases Superman. However, the Man of Steel clearly expresses an overwhelming sense of gloom. Overall, it seems as though Superman doesn’t exactly know how to feel.

Ultimately, these mixed emotions can be attributed to the lost communication with his wife and son who are embarking on a quest through the galaxy with Jor-El.

Thus, Superman is simply lonely. During his return home, he continuously flashes back to tender moments with his family. He doesn’t exactly know how to not be preoccupied with the absence of his wife and son. Now, if that absence wasn’t enough to affect Superman, the Fortress of Solitude is also gone. Still, Superman takes it upon himself to construct a new one within the Bermuda Triangle.

Sometime later, J’onn J’onzz AKA Martian Manhunter pays a visit to Metropolis. He presents an interesting proposal to Superman as he suggests the Man of Steel takes on a leadership role in the world. Superman seems skeptical, particularly because J’onn initially suggests Superman “take over” the world.

He laters rephrases his words to suggest Superman should simply offer himself to the world instead. Superman promises to consider the idea right before he makes a horrifying discovery: Earth is within the Phantom Zone, and Rogol Zaar is free.

Restoring The Man of Steel

Bendis presents a solid portrait of Superman’s character in this first issue. I enjoy his depiction of a lonely Superman who is struggling to re-identify himself during his solitude. I also enjoy Superman’s perception of Martian Manhunter as the heart and soul of the Justice League. That perception exemplifies the significance of the relationship between the two as well as the kinship between them being the last of their kind.

Because of this, it will be interesting to see how the two’s relationship will evolve in this series, especially because the two don’t exactly see eye to eye in regard to Superman’s role as a leader in the world. Martian Manhunter doesn’t exactly seem to be much like himself right now. However, I may just be looking into the strange way he phrased his proposal to Superman. Though we can all agree it was quite strange.

With that being said, I am not exactly sure how I feel about that potential arc.

As of now, I doubt Superman’s pursuit of leadership would bring anything new to this series, particularly when Rogol Zaar is about to make his return. Thus, I hope future issues take this series’ arc in more unexpected directions because right now, nothing innovative appears to be on the table within the series’ plot.

Of course, we’ll just have to wait and see how everything unfolds. 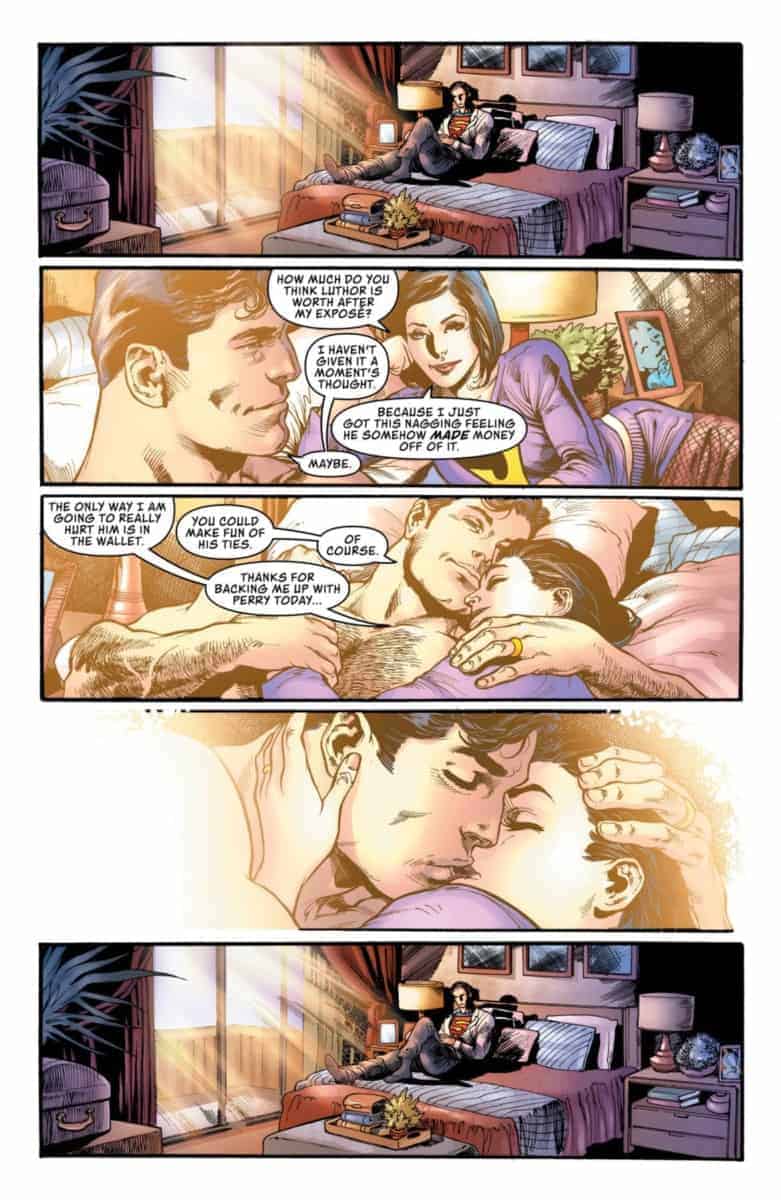 The Many Hues of SUPERMAN #1

SUPERMAN #1’s artwork is among the issue’s main highlights. Ivan Reis’ pencils and Joe Prado’s inks are absolutely thorough and clean. One particular standout of their work appears when Superman creates a new Fortress of Solitude. Colorist Alex Sinclair accompanies the images with some gorgeous blue tones. As a result, the depiction of the new Fortress is grand and perfectly exemplifies its significance to Superman’s narrative.

The sequence that follows the creation of the Fortress is also worth noting. Sinclair continues the usage of blue tones; however, in this sequence, they are much softer. Thus, those hues contribute to Clark’s isolation. This pattern in tone becomes juxtaposed in later pages when Superman interacts with Martian Manhunter and various civilians. The tones of these sequences are much more vibrant, alluding to the idea that Superman finds solace and energy in the presence of others.

A Retrospective on Superman: Whatever Happened to the Man of Tomorrow?

So, overall, I love the sharpness of SUPERMAN #1’s artwork. Every line is clean, and every image of Superman has layers of emotional depth. Also, the final page is gorgeous as it depicts the state of the Phantom Zone. It is wildly colorful, intricately drawn. It’s also a  little terrifying as the skulls of the dead scatter the page.

SUPERMAN #1 is a consistent, cohesive issue. It is entertaining and presents a vulnerable Superman who is at a crossroad with his identity. Most notably, SUPERMAN #1 is an exceptionally illustrated work that enlivens each and every setting within it. Now, in regard to the narrative itself, there are many questions that remain.

Many elements of its plot call into question the direction of the series’ current arc. I only hope that future installments of SUPERMAN are bold and don’t hold back in pursuing new avenues that challenge Superman’s character and audience expectations.