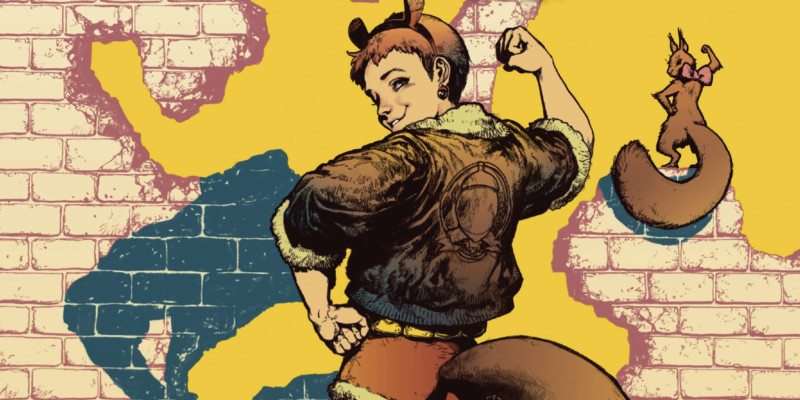 When you think of the word “superhero,” you probably imagine leaping over tall buildings or running at the speed of light, not buying new textbooks for the Fall Semester or running because they’re late to class. With the release of AMERICA #1, in which Miss America decides to take a break from super heroics to attend college, I started to wonder about the intersection of superheroes and college life.

The juncture between super-powered individuals and education has been a pervading theme throughout comics for some time now, as seen in the case of the X-Men’s comics. The Xavier School for Gifted Youngsters, founded and run by mutant extraordinaire Charles Xavier, was created as a safe haven/learning center for young mutants where they could surround themselves with a community of similar students, learn to control their powers, and possibly graduate to become heroes. However, what happens in the case of superheroes who have already controlled their powers, and still wish to pursue higher education?

For the sake of this article, let’s look at three specific case studies of superheroes who have attended or are currently attending an academic university: Spiderman, Squirrel Girl, and Miss America.

Created in the early Silver Age of comics by comic book legends Stan Lee and Steve Ditko, Spider-Man first appeared in the comic book anthology AMAZING FANTASY#15 published in 1962. After being bitten by a radioactive spider, average orphan and high school student Peter Parker attains his famous web-slinging powers, changing his “average” identity forever. Since then Spiderman has evolved into one of the most iconic images of superheroes in today’s age, representing the traditional underdog figure who rises to the occasion.

READ: Here’s our take on the upcoming SPIDER-MAN: HOMECOMING movie!

One of the most trademark quirks that endeared Spiderman to his fans was his constant struggle to maintain a double life, balancing the ceaseless responsibilities of a superhero as well as that of the average student. When he was attended Midtown High School before receiving his Spidey powers, Peter Parker was the symbol of the average teenage underdog: nerdy, studious, and dealing with the constant threats of homework and bullies.

Through his abilities, Peter Parker was able to elevate himself and survive high school, using his powers to challenge bullies both in school and out; and through his academic powers, he was able to receive a science scholarship to Empire State University. From there, Peter had delved into a reality many students know today: the work-study existence, trying to study biophysics while struggling to keep his job as a photographer at the Daily Bugle (and anyone who knows the editor-in-chief J. Jonah Jameson, knows that that is easier said than done.)

While a large part of his life is dedicated to saving the world, Spider-Man also exists as Peter Parker, and a major part of his reason for going to college was to support his human identity. As a college student, Peter Parker was able to pursue his non-superheroic interests, going back to his original love of science, as seen by his choice of a biophysics major.

Furthermore, college also became a safe place where Peter could not only develop his mind but also his heart. Along with longtime love interests such as Gwen Stacey and Mary Jane Watson, Peter learned the ins and outs of romance as well as the sciences. Also, as a college student, Peter Parker was more able to maintain a family life, sustained through his relationship with his loving surrogate mother, Aunt May; and, when superhero life got rough, by remembering who he was protecting the city for.

Furthermore, “With great power comes great responsibility.” While Uncle Ben’s words were directed to a specific young vigilante, this phrase can apply to any college student. Balancing a schedule filled with the demands of family responsibility and student life can often be a superheroic task, requiring constant vigilance and incredible mental strength. As college students, we go to school so that we can hone the powers we have, whether in our innate academic abilities or those we discover on campus. Like Spiderman, we must learn how to direct our powers to obtain specific goals, such as defeating evil masterminds or figuring out career paths for after we graduate. Furthermore, like Spiderman, we must own our great responsibilities, both to our environment in becoming contributing members of society, and to ourselves by pursuing the knowledge we want and learning what we want to do in the world and how to instigate change for the better.

Doreen Allene Green (yes, her name rhymes three times) is an average young woman and computer science major. And did I mention that she is also Squirrel Girl, a superhero endowed with super strength, inhuman agility, and the power to talk to and influence squirrels?

Making her first appearance in MARVEL SUPER-HEROES #8 by Will Murray and Steve Ditko, Squirrel Girl was created out of the impetus to feature more light-hearted characters in contrast to the darker, more dramatic superhero storylines out there at the time of her conception (DC movies, are you listening?). Out of all honesty, the character hadn’t been expected to last very long in the comic book canon due to her unusual design and powers.

However, almost three decades later, Squirrel Girl’s status as a superhero is stronger than ever, especially with the premiere of her solo comic in January 2015, THE UNBEATABLE SQUIRREL GIRL by Ryan North and Erica Henderson. With refreshing artwork consisting of clean lines and bright colors, and slice-of-life superhero humor that echoes the likes of PATSY WALKER, A.K.A. HELLCAT!, THE UNBEATABLE SQUIRREL GIRL focuses on Doreen’s latest daring escapades. Some of these exploits include organizing her course load for the semester (any student who deals with the CUNY school database knows it’s worse than facing Dr. Doom himself).

In this ongoing series, Doreen has enrolled at Empire State University — the same college Spider-Man went to — to study computer science, while simultaneously continuing her life as a superhero. In the first issue, Squirrel Girl is questioned by her current partner, Tippy Toe, a squirrel who wears a pink bow, as to why she’s going to college in the first place. Doreen responds that she wants to “be the best [she] can be,” stating there’s more to being a hero than simply “punching the strongest.” Her words echo the sentiments of many college students, including myself, explaining our desire to obtain higher education, in that we strive to attain the best version of ourselves as more educated and enlightened individuals. Furthermore, Squirrel Girl wishes to study Computer Science in order to obtain new knowledge, wanting to expand her skill sets and abilities.

While Squirrel Girl decides to go under the radar as a regular human college student just as Spider-Man did, she does make valuable allies who know her secret, including new roommate Nancy Whitehead. Originally unaware that Doreen is a superhero, Nancy becomes an invaluable confidant after learning of her new roommate’s dual identity, sympathizing with Squirrel Girl on the daily struggles of college life as well as assisting with her supernatural melees. She even encounters iconic figures, such as Captain America and Loki, on one occasion hilariously requesting the latter to shapeshift into Cat Thor.

Other supporting characters in the comic include fellow superheroes such as Koi Boi, who can communicate with fish, and Chipmunk Hunk, who possesses the ability to communicate with chipmunks. Through Squirrel Girl, we see a visual comic book testament to the advantages of college life, such as creating a new community of friends and allies and learning new skills, while learning to create an expanded identity, both as superhero and superstudent.

READ: Want to learn more about Squirrel Girl? Check out our interview with artist Erica Henderson!

Though the title of Miss America had originally belonged to Madeline Joyce, a teenage heiress/superhero from the 1940s, the title eventually shifted towards a more modern kind of hero, cast upon the Latinx-American LGBTQ+ teenager, America Chavez. Making her first debut in VENGEANCE #1 (2011) by Joe Chasey and Nick Dragotta, it wasn’t until the Marvel NOW! YOUNG AVENGERS run by Kieron Gillen and Jamie McKelvie that America truly broke out as a Marvel heavy hitter, charming readers with her sharp wit, strength, and ability to literally kick doors into new dimensions. Going back to the source of inspiration for this article, Miss America presents another unique college/superhero dynamic.

Since age means nothing in the comic book world, already America Chavez had served on multiple superhero teams — including the Teen Brigade, Young Avengers, A-Force, and most recently the Ultimates — and now, as an experienced veteran at a young age, is bored and ready for a challenge. After becoming exhausted with the repetitive lifestyle of constant crime-fighting, America Chavez decides she needs more variety in her life and goes to find it in the field of college education.

Unlike Peter Parker or Doreen Green, America Chavez is out of the closet (in more ways than one), living an unfiltered life as a superpowered individual and college student, even attending a university with other superhero kids like herself, including former Young Avengers teammate, Prodigy. Furthermore, unlike Spider-Man or Squirrel Girl, Miss America does not have a specific major or direction in mind, except coming to a place where she hopes to find the answers she is looking for. In that sense, America resembles a lot of students who go to college — those who don’t yet have specific ideas about what to do with their life (who does at eighteen?), except the desire for change, both within themselves and the world around them.

AMERICA #1, in itself, is a hopeful indicator of change, as it is the first Marvel title to have an LGBTQ+ woman of color as its lead, marking Marvel’s continuing initiative for diverse representation. Furthermore, the name of America’s university is in itself a testament to the impact of diversity and education, named after the first Puerto Rican and Latina Supreme Court Justice, Sonia Sotomayor. Like many students who are the first in their families to go to university, America Chavez carries many hopes and burdens on her shoulders, representing a generation that is young, vulnerable, and unknowing of what the future holds. Nevertheless, she’s beauty, she’s grace, she’ll punch you in the face, and America is definitely ready for all the challenges that college has to throw at her.

READ: Haven’t yet read AMERICA #1? Check out our review on it here.

Though all these characters have different origin stories and unique personalities and skill sets, each of them is united through two very important identities: heroes and students. Each of these characters hopes to gain something from their respective universities, whether an identity beyond the mask for Spider-Man, new knowledge, and community for Squirrel Girl or simply a new direction as in the case of Miss America.

Even when facing one’s challenges, whether supernatural or academic, each of these heroes maintains one essential goal: to maintain and merge multiple identities, as scholars, conquerors, role-models, with eyes constantly wide open to the world. The truth is, superheroes are constantly learning, whether how to face one’s enemies, challenge one’s inner demons, or simply figuring out new routines, and college provides the perfect battleground for these challenges and the opportunity for knowledge and change.